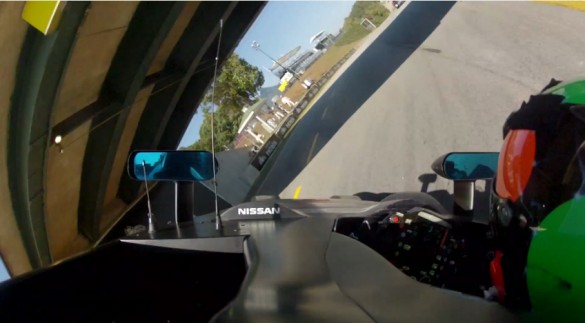 We’re not ones to give in to superstition, but there’s a growing body of evidence to suggest the Nissan DeltaWing racer is cursed. The innovative race car crashed hard at Le Mans when it collided with a Toyota TS030, and many thought the car’s racing days were over. Fans were thrilled when it was announced the car would return to the American Le Mans Series for one more race, this weekend’s Petit Le Mans at Road Atlanta.

As the video below (from HighcroftTV, via ALMS) shows, driver Gunnar Jeannette ran out of luck as he headed into turn 11, the steepest drop-off on the Road Atlanta circuit. It’s a blind corner, meaning that you can’t see the entry until you’re right on top of it, which makes it… entertaining at high speeds. The correct line is essential, as turn 11 ultimately leads on to the front straight.

From what we can tell in the video, the driver of the green Porsche 911 went wide on the entry to turn 11. Given that he abruptly turns into the DeltaWing, causing the crash, we’d say the Porsche driver never even saw the car closing on him. Could that be the issue behind the DeltaWing’s string of bad luck? It’s low profile and stealth color make it nearly invisible?

That makes more sense to our logical minds than the car being cursed. Word is that the car will be repaired in time for qualifying, and it will run in Saturday’s Petit Le Mans. Let’s hope the ALMS is able to address the visibility issue before the race, because we really don’t want to see another DeltaWing crash video.