Toyota Gets Even Greener With Toyota Yaris-based Hybrid 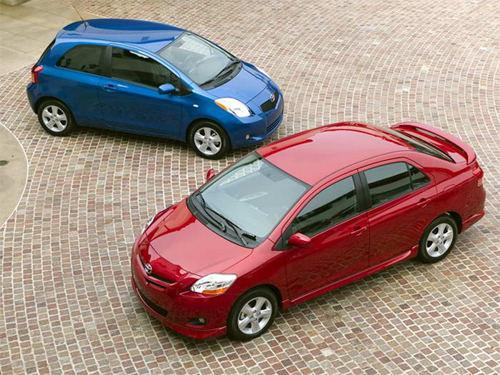 Reported today from Tokyo, Japan Toyota Motor Corp. plans to introduce a new small hybrid car to be in the same class as the new Honda Insight. Chief engineer of the redesigned 3rd generation Toyota Prius, Akihoko Otsuka said, “We are developing a low-priced hybrid vehicle like Honda’s Insight.” The small gasoline-electric car being planned will be a low-priced spinoff of the current Toyota Yaris. In addition Otsuka said, “We are going to compete by expanding our hybrid-vehicle lineup to smaller hybrids, in the class of the Vitz [sold in Japan] and Yaris.”

This may be an answer by Toyota to compete with the new Honda Insight as it’s sales are doing well in Japan as it will be followed by a hybrid version of the Honda Fit.

Why not factor in two energy saving benefits of not only developing a new hybrid car but a smaller one. That’s two major factors working in Toyota and Hondas advantage in these new endeavors of creating green machines.

The opportunity is in Toyotas face to “easily” produce a cheaper alternative to the current Toyota Prius hybrid.

Otsuka said the top priority in developing the new Prius was to boost fuel efficiency, not reduce the price. Through countless overhauls, he achieved a preliminary EPA fuel economy rating to 51 mpg city/48 highway, up from 48/45 mpg for the 2009 Prius.
Foremost among the improvements is better aerodynamics. The new Prius has a drag coefficient of 0.25, the slickest in Toyota’s lineup. That compares with 0.26 for the current Prius. That difference alone delivers a 1 percent increase in overall mileage, Otsuka said.