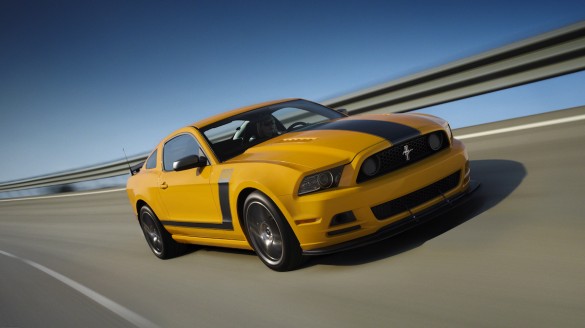 The 2014 Ford Mustang order guide has been published, and as expected there aren’t a lot of changes to most V-6 and V-8 Mustangs. The same holds true for the Shelby GT500, which was updated for the 2013 model year. With a completely new Mustang due from Ford in 2014 as a 2015 model, it’s really no surprise that Ford didn’t sink a lot of development into the current car’s final year, but there’s also a bit of serious bad news, too.

As Mustangs Daily reports, the much-revered Boss 302 Mustang won’t be back in 2014, which means that the car (in its current form, anyway) will only have a two-year production run. That was Ford’s claim all along, but given the car’s success (and its rarity), we expected Ford to build the Boss as long as there was demand.

The only real changes to the Mustang for 2014 come in paint choices; Red Candy Metallic has been replaced by Ruby Red Metallic, while High Performance White has been dropped in favor of Oxford White. Exterior package 101A (which included a lower tape stripe and a rear spoiler) has been dropped, but two new appearance packages have been added. Both include black mirror caps, a black rear spoiler and quarter window louvers, but Package FP6 comes with black 18-inch wheels while Package FP8 comes with silver and black 19-inch wheels.

We were huge fans of the Boss, and sincerely hope that it reappears again in the future. It was one of those rare cars where the whole truly was better than the sum of the parts, and it was one of the few track cars that could comfortably serve double-duty as a daily driver. If you haven’t had a chance to get behind the wheel of one, we say do what it takes to get a drive.