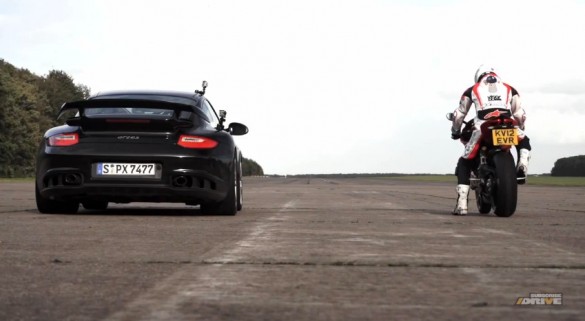 There are dozens, possibly even hundreds of car versus motorcycle drag race videos on YouTube, and in the vast majority of cases, the bike gets through the quarter-mile first. As Chris Harris proved in his first round of car-versus-bike drag racing, you really can’t argue with the motorcycle’s superior power to weight ratio, assuming you can get that power to the ground with minimal wheelspin.

While four wheels are almost always worse than two in a straight line (and generally on most road courses, too) Harris wondered if there were circumstances under which the car would prove faster than the bike. Since that wasn’t the case in a quarter-mile, Harris found a two-mile paved runway for his latest throw-down, also featuring a 911 GT2RS against a Ducati 1199 Panigale.