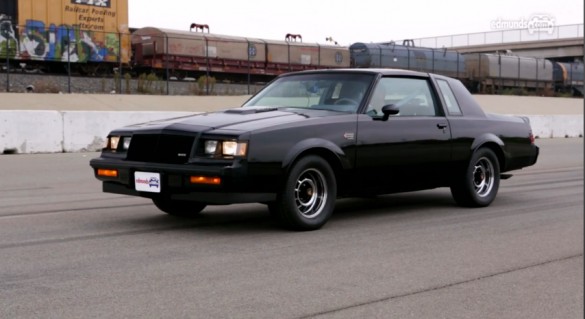 Ever get nostalgic for the good old days, when gas was (relatively) cheap and you didn’t need to get to the airport hours ahead of your flight to clear security? While life was (arguably) easier in the decades before the internet, email, tweeting and texting, options for performance cars pale by today’s standards.

In the mid to late 1980s, one of the fastest cars produced in America came from Buick, and it didn’t even have a V-8 stuffed under the hood. Instead, Buick’s Regal Grand National, murdered out before murdered out was cool, relied on a turbocharged V-6 to put out 245 horsepower and 355 pound-feet of torque. Those were big numbers back then, and the car’s quarter mile time of 14.6 seconds was quicker than a Camaro IROC-Z (15.1 seconds) and nearly on par with a Corvette (14.4 seconds).

That’s not particularly impressive in light of today’s car choices, as even a V-6 Camaro will run a 14.3 second quarter mile. When you see Chris Walton test the (non-ABS) brakes, or muscle the baby-got-back Buick through the slalom, you begin to get a sense for how good we have things today.

We’d still love to have a mid-80s Buick Grand National parked in our garage, since it’s an important part of muscle car history. That said, we’re thankful for the performance cars of today, but eager to see how much they’ll improve over the next two decades.