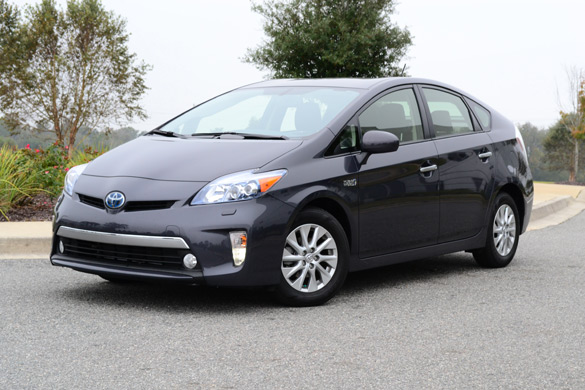 The 2012 Toyota Prius continues to embody the purpose-built principle of being one of the most fuel efficient vehicles on the road today. To expand on the Prius’ technological advancements, a new Prius plug-in version has been introduced for the 2012 model year to further push the fuel efficiency envelope to new heights.

I had the chance to experience firsthand on the highway and in city traffic if there were any beneficial attributes to a plug-in hybrid version of the Prius. To summarize the differences in the new Prius plug-in hybrid version and a normal 4-door Prius, you do not have to stretch your imagination too far. The new Prius plug-in hybrid (PHV) takes the traditional Prius and introduces an electric-only range of about 13 miles and the ability to charge the larger battery through a standardized plug. All else remains to be a Prius hybrid in the traditional sense of mustering out about 50 mpg in the city and highway. 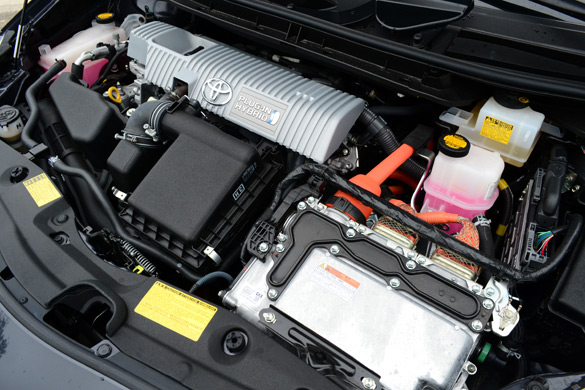 The conception of the new Prius plug-in hybrid is somewhat of Toyota’s answer to the Chevy Volt and with a dab of essences of the Nissan Leaf. The Leaf and Volt are totally different vehicles as they are when compared to the Prius plug-in hybrid. The Leaf is completely electric and the other, having an electric drivetrain with a gasoline motor acting as an active generator, is essentially an extended range electric vehicle. The Prius plug-in is still the concept of a traditional Prius, it only adds the capability to charge a larger and heavier nickel-metal hydride battery pack and have a viable electric-only range by means of a higher threshold of electric propulsion before kicking in the gasoline engine.

In terms of power output of the 2012 Prius plug-in hybrid, it is the same combined 134 horsepower output rating derived from a 98-horsepower 1.8-liter inline-4 cylinder engine and 80 horsepower electric motor as found in the regular Prius hybrid. The total horsepower figure, by means of some fuzzy math, is consequent of how the power is transmitted, which finds its way to the front wheels through a specialized continuously variable transmission (CVT). 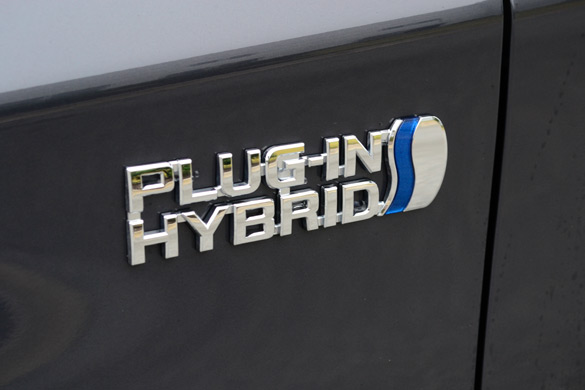 The 2012 Prius plug-in hybrid, aside from the specialized PHV badges, silver paint on the door handles and extra cutout in the left front fender for the charging plug, there are no distinctive characteristics to differentiate a plug-in hybrid Prius from the normal Prius hybrid. The same goes for the interior, and for the most part, the way in which it drives. However, driving the new Prius plug-in hybrid, with the added weight (about 330 pounds) of the larger battery pack, tends to get in the way of performance. Prius and performance go together like oil and water, even more so in the new plug-in hybrid version getting a 0-60 mph time of 11.3 seconds – a step in the wrong direction from the already lackluster time of 9.8 seconds in the standard Prius sedan.

After much time spent in development of the Prius, still holding the title for today’s quintessential hybrid vehicle, the new Prius does everything that it is supposed to do without any fuss. When you think of a Prius and an appliance, they are both purpose-built and sometimes one may gain a few pounds to add extra features to keep the consumer happy. That is just what the Prius plug-in hybrid is all about, a continuation of not disappointing its main consumer base. 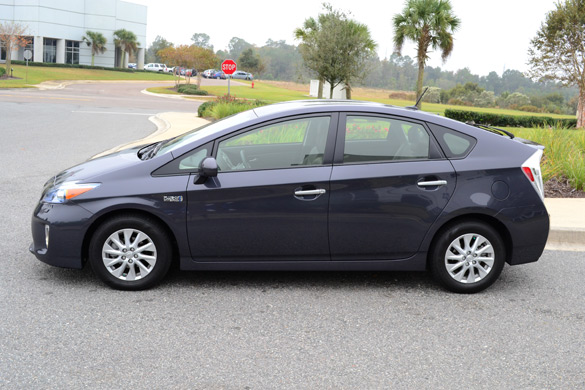 Driving impressions of the Prius plug-in hybrid are about on par with Sebastian Vettel taking his Infiniti FX to his next F1 race, sure it will get him around the track but it won’t win any races even if he is getting better gas mileage than everyone else. The electric mode for the new Prius plug-in hybrid is good for traveling up to 62 mph and topping out a range of around 13 to 15 miles. Just getting the Prius near highway speeds in electric mode is somewhat of a challenge, even on a fully charged battery, due to relatively low load constraints on the electric motor. Low speeds are not such of an enduring task, though the LCD dashboard information screen does a good job at actively displaying your throttle/load conditions so you may accelerate softly without demanding the ECU to turn-over the gas engine. After the main battery is depleted, the Prius plug-in hybrid is back to the normal expected modes of a ordinary Prius hybrid. It will actively charge the temporary battery storage for those times when you are crawling around town or in stop-and-go traffic. 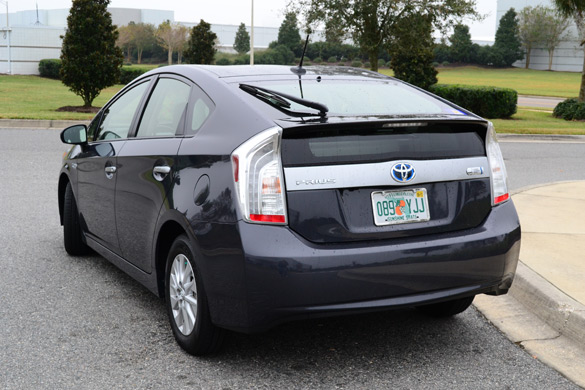 The hybrid system in the new 2012 Prius and Prius plug-in hybrid are the best that they have ever been. The time when the engine turns over is hardly noticeable without any abrupt power transitions. Even the braking system has been tweaked to limit as much unnatural feedback when the generators kick in to put power back in the battery during slowing. Toyota has almost mastered the efficiency of their hybrid system to get as much juice out of every drive through an advanced control system that works virtually seamless in the background.

Driving the Prius plug-in hybrid to the limit is almost a necessity when peculiar traffic situations demand it. The Prius has just enough power to not be dangerous when keep up with flowing highway traffic. The ride quality is fairly good and never overly soft. Traction and stability control is sometimes overly sensitive drowning out any bit of wheel spin or loss of traction. 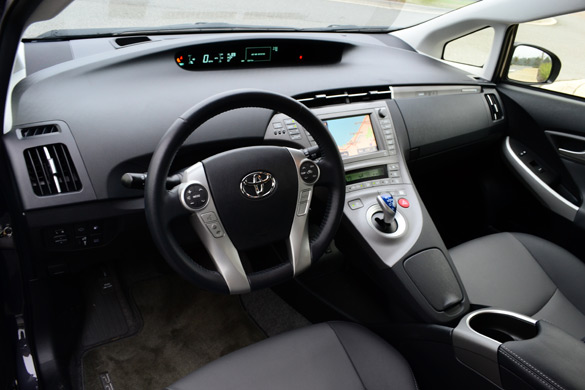 The interior of the new Prius plug-in hybrid, basically identical to the regular Prius hybrid, features a floating console setup with storage space underneath it. The futuristic cabin design makes the best use of all available space, while the central mono-green LCD information screen reading out a multitude of vehicle data and hybrid drive status.

What is more of a disappointment with the new Prius’ interior is the use of plastics that actually look somewhat cheap. Hard plastics are used throughout the interior leaving the only soft surfaces to the leather seats. Though, most of the interior plastics mesh well together, which is more of an expected characteristic for a Toyota than the overshadowing use of hard plastic. Seating position for the driver seems somewhat disconnected due to the long distance to the dashboard and far reach for what is a telescoping steering wheel. 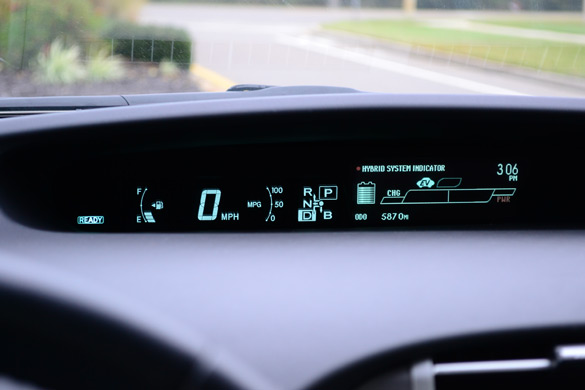 Considering that enthusiasts will probably pass on the purchase of a new Prius and the plug-in hybrid version, it still serves to be the most sought-after hybrid vehicle and gas miser on the road today, and for good reason. I saw a steady 46 mpg on the highway when really pushing the Prius plug-in hybrid beyond the boundaries of what the speed limit signs had posted. Around the city fuel estimates hovered around 53 mpg.

With emerging hybrid competition coming into the picture from many automakers, the Prius may eventually have its work cut out. Something tells me the Prius does not have much to worry about with its decade-long jump on the market when it comes to hybrid vehicles in the states.

The new 2012 Prius plug-in hybrid has a starting price of $32,000, about $8,000 more than the standard 2012 Prius hybrid starting at just $24,000. Is the premium of the plug-in hybrid version worth it? It all depends on your usage. One could consider the plug-in hybrid if they commute 10 miles to work each day, they could essentially utilize the electric mode and hardly ever use gas.