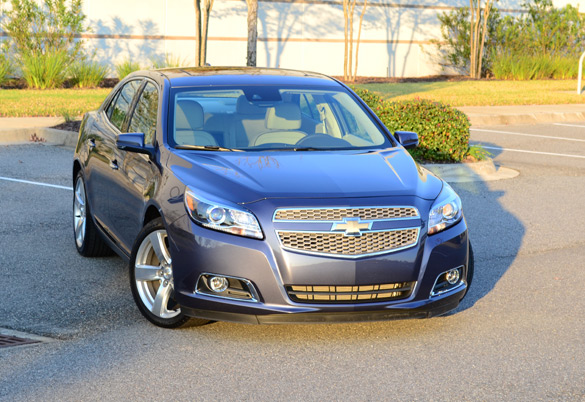 All-new for 2013, Chevrolet brings their redesigned entry-level midsized Malibu sedan to the game eager to run with the competition. In most respects the all-new Chevrolet Malibu is a modest attempt to keep the segment on a level playing field with some added refinement, sports-appeal and luxury without inflating the price. In many ways Chevrolet has accomplished this task but has to face its tough and relentless competition head-on in a perpetual battle.

Completely redesigned inside and out, the new 2013 Chevrolet Malibu gets a new-found recognition from the re-sculpted front fascia to the Camaro-inspired tail lights. You cannot deny broadcasting Chevrolet’s aim to use the sporty appeal of the Camaro and trickle the design into the new Malibu. If the tail lights do not give it away then the new gauge cluster, similar to the Camaro’s also, will do the trick. 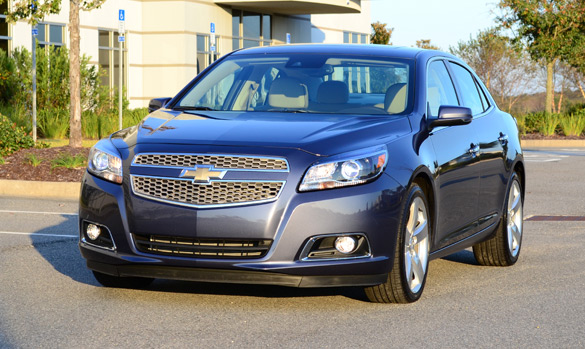 Most times it is a good thing to incorporate an automotive brand’s new, fresh look into many, if not all, of its vehicles. The Malibu shares many of those qualities with an added bonus of getting the sporty Camaro’s unique characteristics throughout. Still, the new 2013 Chevrolet Malibu is an affordable sedan improved in just about every aspect over its predecessor. 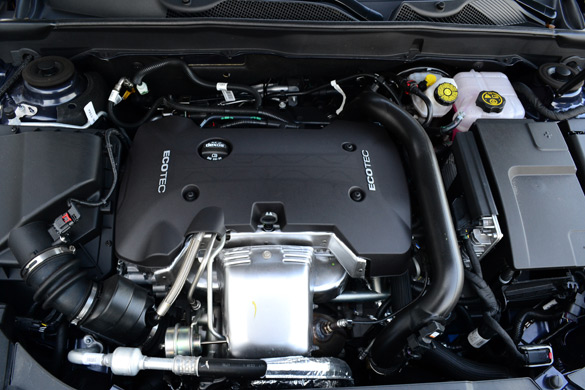 I had the chance to drive the new 2013 Malibu LTZ trim equipped with the 2.0-liter 4-cylinder turbocharged engine, producing a healthy 259 horsepower at 5500 rpm and 260 lb-ft of torque at a low 1700 rpm. The new turbo engine, same as found in the turbo version of the new Cadillac ATS and Buick Regal GS, only slightly less power in the Malibu, works exceptionally well for Chevy’s new cash-cow sedan. Although the EPA fuel numbers are a bit short from direct competition, the 2.0-liter turbo 4-banger is the better choice of powertrains for the Malibu compared to the 197 horsepower 2.5-liter engine as well as the Eco variant of the Malibu with the same 2.5-liter in addition to a 15-hp electric assist motor. You will surely get better EPA fuel consumption figures from the 2.5-liter mill and Eco version of the 2.5, but with slightly less power and low-end grunt. 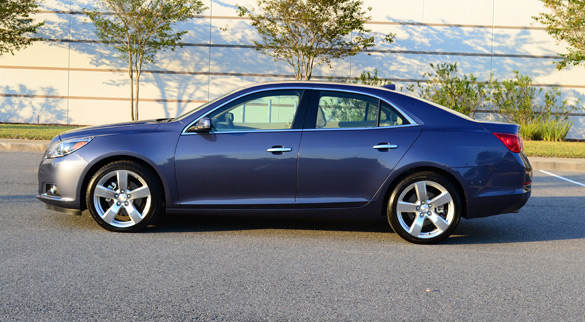 All 2013 Malibu trim levels (LS, LT, Eco and LTZ – varying multiple number stages) get a 6-speed automatic transmission directing power to the front wheels. A manual shifting mode is somewhat of a novelty as it only offers rocker-buttons (up and down) atop of the shift knob. It is rather cumbersome to use the controls, which my thought would to completely eliminate them or at least offer shift paddles for the sportier LTZ trim or turbo engine-equipped Malibu. Aside from the quirky manual-shift control, GM’s 6T70 6-speed automatic transmission is up to the task for detecting driving styles and performing smooth shifts. During my time in the peppy 2.0-liter Turbo Malibu, the transmission quickly adapted to my heavy foot and held gears longer, similar somewhat of a sport mode. After driving in a more civilized fashion for about a half a mile, the transmission was back on its normal shifting duty.

EPA figures for my Malibu Ecotech Direct-Injection Turbo 2.0-liter engine come in at a 21 mpg city and 30 mpg highway. Those are not so thrilling figures for a 4-cylinder engine even with 259 horsepower. Possibly to make up for fuel efficiency, the new 2013 Malibu has decent performance taking only 6.3 seconds to make it to 60 mph from a dead stop and landing a respectable 0.86g skid pad lateral accel. Much of the new Malibu LTZ with the turbo engine’s handling abilities is due to a sport-tuned suspension and optional 19-inch aluminum wheels shod in 245/45R all-season tires at all four corners. The sport-tuned suspension follows traits of the Camaro, the rear end is a bit disturbed by some additional unwanted bounce. Basically, the rear shocks, in my opinion, are not dialed in like a front-wheel-drive sedan should be. Over-all ride quality of the new Malibu LTZ turbo is excellent giving the driver a sense of added stability at highway speeds. 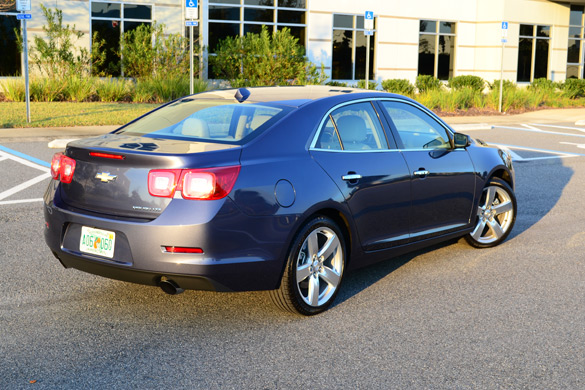 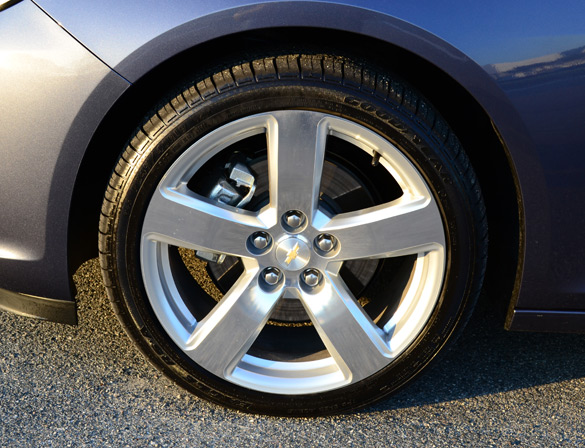 Chevrolet’s new MyLink system, standard on all trims except the LS, is a new infotainment system integrated into a color 7-inch touch-screen. The new MyLink system proved to be very responsive and mostly user-friendly. The MyLink system can be optioned out with a full-on navigation system. Though, most consumers will be happy to get turn-by-turn directions downloaded from GM’s OnStar system, which will give you a perception of having a navigation system in a MyLink configured Malibu only when specific directions are requested via OnStar. The MyLink also combines sync with your smartphone to access Pandora app or your own music library as well as Bluetooth integration, streaming audio and data services. Connecting my iPhone 4S proved to be a seamless integration with the MyLink system, something Chevrolet gets right. Remote keyless access and remote start found on my Malibu LTZ also prove to be quite the convent amenity, especially during those cold mornings when you need to pre-heat the cabin and defrost the windows. 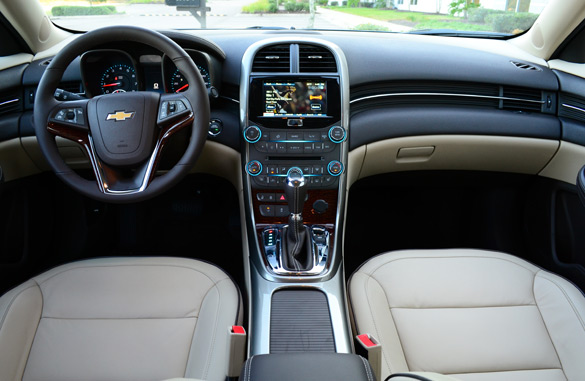 Inside of the new 2013 Malibu all trim levels get a much-improved interior with many color accented materials, mostly plastics and padded vinyl, simulating a well-appointed cabin. The seating positions and comfort was also a step above its predecessor with just the right amount of bolstering in the front seats for a mid-sized sedan. The subtle color scheme of the interior was also perceived as a premium classification for the interior in addition to the soft leather seats with accented trim. 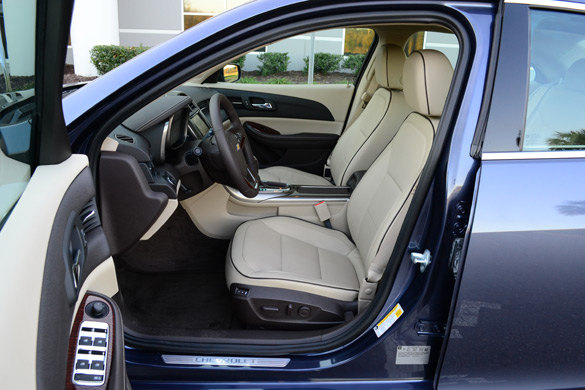 The cabin remains fairly quiet isolating the buzz and most of the turbo whistle from the direct-injection turbo 4-cylinder engine. Rear seating room is much wider than I remember in previous generations of the Malibu. However, rear leg room can quickly be cut short dependent on the front seating positions, which allow the front occupants to adjust aft almost until the front seat-back touches the rear seat bottom. 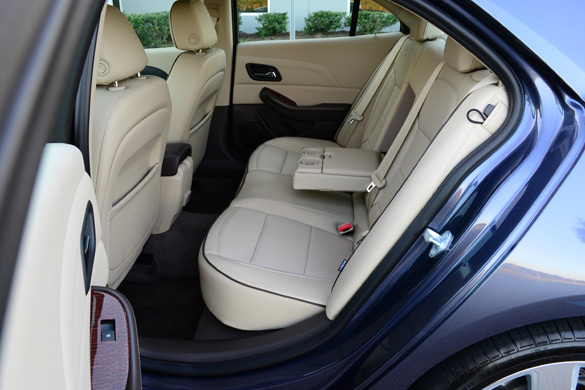 The automotive enthusiast appeal of the all-new 2013 Chevrolet Malibu is alive and thrives much in its sporty driving characteristics and few Camaro-styling cues. Given the tough and relentless competition, much of which have received complete redesign this year, the 2013 Chevy Malibu has its work cut out. The new 2013 Malibu does, however, shine in the aspect of a powerful turbocharged engine and a premium-feel that you can get in a well-appointed package all for a competitive price.