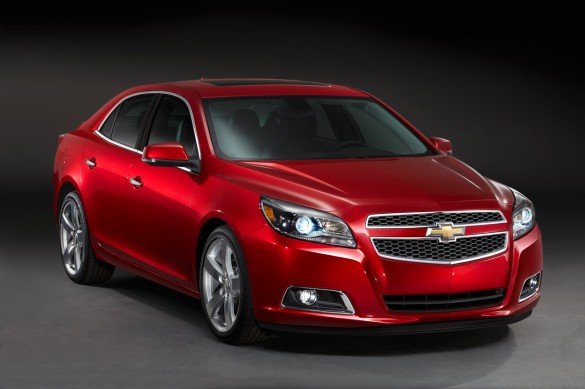 General Motors has taken the covers off of the new 2013 Chevrolet Malibu just before its official introduction at the Shanghai Motor Show. The new 2013 Malibu has a totally new design to appease global markets, more than 100, and offer more efficient engine choices.

The new 2013 Chevrolet Malibu is aimed at doubling sales in China by 2015. The aggressive approach in the 2013 Malibu’s design will offer more legroom and trunk space than the outgoing model and a direct injection 190 horsepower and 180 pound-feet of torque 2.5-liter 4-cylinder Ecotec engine mated to a 6-speed automatic. MPG figures have not been released but we expect it to be an improvement over the previous-generation model’s 4-cyl.

Hit the full press release below for additional information before the unveiling at the Shanghai Motor Show later this week.

All-new exterior designed to stand out around the world

New radio face that articulates up and down revealing a six-inch-deep hidden storage compartment, a first for a U.S. midsize sedan

DETROIT and SHANGHAI – The all-new 2013 Chevrolet Malibu made its global debut today, with simultaneous introductions in the United States and China – two of the nearly 100 countries on six continents where it will be sold. Chevrolet’s first global midsize sedan will provide customers from Shanghai to New York and Sydney to Sao Paulo with expressive design, advanced technologies, ride performance and fuel-efficient powertrains.

“The current Malibu has left an award-winning impression and changed the way people think about Chevrolet. It redefined what an American midsize car could be,” said Rick Scheidt, vice president, Chevrolet Marketing. “This all-new Malibu delivers on the intangibles of today’s Malibu but gives customers even more: more style, fuel efficiency, content and features, craftsmanship, and dynamic capabilities rivaling high-end sedans.”

All-new, Chevrolet-signature dual-cockpit interior that is more spacious, features premium materials and is engineered to be the quietest in the midsize segment

“The exterior design of the all-new Malibu carries DNA from its sister vehicles, the Camaro and Corvette, to bring a sporty sensibility to the family sedan segment,” said Bryan Nesbitt, executive director for GM exterior design and Chevrolet Brand Champion.

A wider stance, broad shoulders and an integrated rear spoiler bring a new athleticism to Malibu and give it a more aggressive appearance. The new Malibu has a 4.5-inch (114 mm) shorter wheelbase and 62-inch (1,574 mm) front and rear tracks that are more than 2 inches (51 mm) wider than the model it replaces.

The new Malibu exterior is anticipated to be SAE-certified as one of the most aerodynamically efficient cars in the segment, with a coefficient of drag (Cd) rating near Chevrolet Volt’s Cd of .280. Because of Malibu’s new shape and design, engineers were able to remove 60 counts of wind drag compared to the model it replaces.

Malibu’s active shutter system automatically closes airflow through the lower intake opening when air intake is least needed. When closed, the shutter system enhances aerodynamic performance by redirecting airflow around the front of the vehicle and down the sides, rather than through it. Whether the shutter is open or closed depends on engine coolant temperature and speed – for example, the shutters open when the car is traveling up a hill, pulling a trailer, or in hot city driving; the shutters close at highway speeds when less engine cooling is required.

The new Malibu interior was designed to bring an element of sophistication to everyday driving, featuring an all-new dual cockpit design that creates an inviting, roomy and comfortable environment.

The increased width of the new Malibu means a more spacious cabin. Compared to the previous model, it has nearly 4 cubic feet (113 L) of additional interior volume, along with more shoulder and hip room.

The Malibu interior features metallic, chrome or wood accents located around the shifter, surrounding the center stack, around the instrument cluster and on doors and the steering wheel. Soft, ice blue ambient lighting reflects off of and complements chrome accents and ensures even, consistent illumination along the instrument panel and in storage pockets. Ice blue lighting on the center stack dials, exposed ice blue French contrast stitching, soft-touch and textured surfaces, and strategic applications of noise-deadening materials add to Malibu’s interior refinement.

The Malibu also has a number of storage areas, including a radio face that articulates up and down to reveal a six-inch deep storage area behind its seven-inch touch-screen radio display – a U.S. first in a midsize car. Malibu will also offer a full range of the latest infotainment options, including new color radio systems and an available navigation system.

Malibu will include Chevrolet’s new MyLink infotainment package at launch. It builds on the safety and security of OnStar and seamlessly integrates online services like Pandora® internet radio and Stitcher SmartRadio®. MyLink integrates wireless connectivity through Bluetooth to enable hands-free use of selected smart phone apps while the device remains safely stowed.

The 2013 Malibu features a global lineup of fuel-efficient and powerful four-cylinder engines that complements its European-inspired driving characteristics.

An all-new Ecotec 2.5L dual overhead cam, four-cylinder engine with direct injection leads Malibu’s engine lineup in North America. It is expected to be one of the most efficient of its size in the market. New features include enhanced authority continuously variable valve timing, variable-displacement oil pump and electronic thermostat that save fuel, while delivering V-6-like performance. It is estimated the engine will be SAE-certified at more than 190 horsepower (141 kW) and 180 lb.-ft. of torque (245 Nm). The new engine has noise-reducing features such as a cast exhaust manifold, steel crank, low-noise timing chain and direct mount accessories that contribute to a quiet-cabin experience.

The 2.5L is mated to a Hydra-Matic 6T40 six-speed automatic with features designed to enhance powertrain efficiency. They include changes to clutch controls and hardware that improves shift response and time. These changes enabled engineers to specify higher gearing to improve cruising efficiency while maintaining acceleration performance and driveability.

The 2013 Chevrolet Malibu delivers precise ride and handling. It has been engineered to be best-in-class and on par with more expensive sports sedans.

Benefiting from continuous refinement of an award-winning global architecture, engineers have tested, tuned and calibrated the Malibu on rural roads, highways, freeways and GM validation facilities around the world.

Contributing to the Malibu’s ride and handling characteristics are:
A solid body structure as stiff as any in the global midsize sedan market, allowing for precise tuning and dynamic vehicle control

An isolated engine cradle for tuned, refined feedback, without noise or vibration

The Malibu will also offer these standard and available safety features:

The new Malibu comes in LS, LT and LTZ trim levels, with 10 exterior colors and four interior color combination choices in North America, depending on the model. Malibu production in the United States begins in early 2012. It will be built in multiple locations around the globe, including the Fairfax, Kan. and Detroit-Hamtramck assembly plants in the United States. Pricing will be announced later this year.