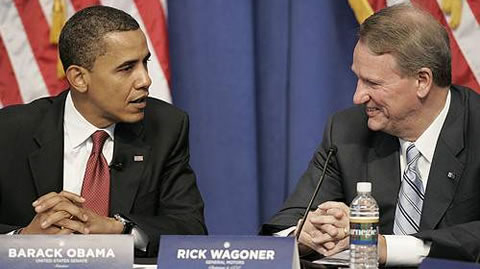 General Motors CEO Rick Wagoner will step down from his position immediately as recently reported by various news associations. This comes about maybe as a slight surprise on the eve of President Barack Obama’s expected announcement of a deadline for Chrysler and General Motors to finalize their terms for restructuring or deciding on a Chapter 11 bankruptcy package.

As the economy shows no apparent signs of improvement except for the recent stock market rallies the auto industry continues to suffer and look for some type of outlet. The outlet for Rick Wagoner was specifically requested by the Obama administration.

Rick Wagoner spent 32 years with GM and in part over-seeing the operations of General Motors all through its better days and recent slump.

Below after the jump is the official message from Rick Wagoner and GM’s board restructuring announcement.

On Friday I was in Washington for a meeting with Administration officials. In the course of that meeting, they requested that I “step aside” as CEO of GM, and so I have.

Fritz Henderson is an excellent choice to be the next CEO of GM. Having worked closely with Fritz for many years, I know that he is the ideal person to lead the company through the completion of our restructuring efforts. His knowledge of the global industry and the company are exceptional, and he has the intellect, energy, and support among GM’ers worldwide to succeed. I wish him well, and I stand ready to support him, and interim Non-Executive Chairman Kent Kresa, in every way possible.

I also want to extend my sincerest thanks to everyone who supported GM and me during my time as CEO. I deeply appreciate the excellent counsel and commitment of the GM Board and the strong support of our many partners including our terrific dealers, suppliers, and community leaders. I am grateful as well to the union leaders with whom I have had the chance to work closely to implement numerous tough but necessary restructuring agreements.

Most important of all I want to express my deepest appreciation to the extraordinary team of GM employees around the world. You have been a tremendous source of inspiration and pride to me, and I will be forever grateful for the courage and commitment you have shown as we have confronted the unprecedented challenges of the past few years. GM is a great company with a storied history. Ignore the doubters because I know it is also a company with a great future.

GM Statement on Officer and Board Announcements

GM is announcing the following changes in the corporate officers and the board of directors:

GM Board of Directors statement, attributable to Kent Kresa, Chairman

“The Board has recognized for some time that the Company’s restructuring will likely cause a significant change in the stockholders of the Company and create the need for new directors with additional skills and experience. The Board intends to work to nominate a slate of directors for the next annual meeting that will include a majority of new directors taking into account the addition of new directors, retirement, and decisions by individual directors not to stand for re-election, although the specific individuals who will be nominated or choose not to run or leave the board are not yet known.”