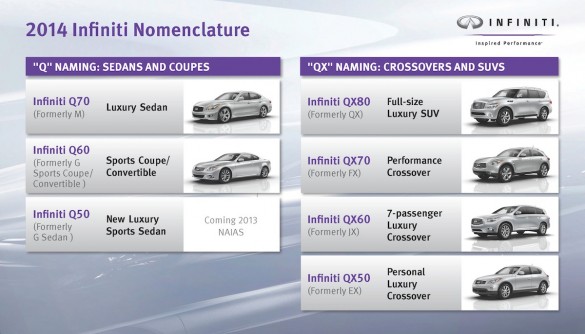 One of the things we love about Infiniti is this: its product names instantly tell us the model and the engine size we’re dealing with. The Infiniti G37, for example, is the brand’s compact sedan (or coupe, or convertible), powered by the 3.7-liter V-6. The QX56 is the big SUV, powered by a 5.6-liter V-8.

Not any more, since for the 2014 model year Infiniti is adopting bizarre nomenclature that identifies vehicles by their “hierarchy within a range.” The G, M, EX, FX, JX and QX prefixes will all be dropped, too, with cars carrying the “Q” designator and crossovers or SUVs wearing the QX name. The G37 sedan (or actually, it’s replacement, due to debut at the Detroit Auto Show) will become the Q50, while the M sedan will become the Q70. The G series coupe and convertible will split the difference, with both being called the Q60.

Taking the Q70 as an example, buyers will have to choose between the 3.7-liter V-6, the 5.6-liter V-8 and the 3.5-liter hybrid, but none of those choices are reflected in the name. Drop the Q70 name on us, and we’ll have no idea which model you’re talking about. On the plus side, we suppose that M37 buyers (sorry, we meant Q70 buyers) will no longer be singled out for ridicule for buying the smaller engine, since a Q70 is a Q70 is a Q70.

To be frank, we hate Lincoln’s naming convention, and we fail to see how adopting a similar meaningless naming strategy will sell even one more Infiniti vehicle. In fact, it’s likely to just confuse buyers, giving them one more reason to hit the Lexus and Audi dealers first. If you’re trying to grow brand awareness and market share, it seems like a step in the wrong direction to us.