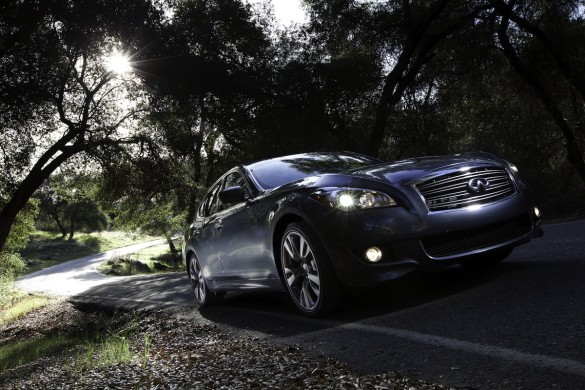 Days after announcing a bizarre and questionable naming strategy for all new Infiniti models, company head Johan de Nysschen seemed to placate fans by “leaking” some very good news on Facebook: Infiniti is working on a forced-induction V-6 version of its M sedan (which will become its Q70 sedan in the near future) that will be good for over 550 horsepower. While speculation is that the new Infiniti sedan will get the 3.8-liter V-6 from the Nissan GT-R, de Nysschen’s comments referred to the new engine as a 3.0-liter unit.

The news was hidden in a statement from de Nysschen, who wrote, “I’m sure you will agree, it would be a bit odd to have a powerful, luxurious and refined V8 powered Infiniti M56, then position a new high-tech 550+ horsepower performance flagship for the Infiniti M range above it, using a potent charged induction V6, but then call it Infiniti M30, which we would be obliged to do, following our current naming logic.”

While that would be bizarre, equally odd is that under the new naming strategy, the V-8 powered M56 would be called the Q70, while the faster forced-induction M30 would be called… the Q70. Having the same name for the two cars, apparently, makes more sense than using different names, since consumers simply wouldn’t understand that the M30 > M56.

We’ll stop questioning Infiniti’s logic now, because we don’t care what they decide to call a 550-horsepower M (or Q). In fact, if it came to market as the Infiniti QM70550 Fluffy Bunny, all our ridicule would go out the window as soon as we dropped the hammer.