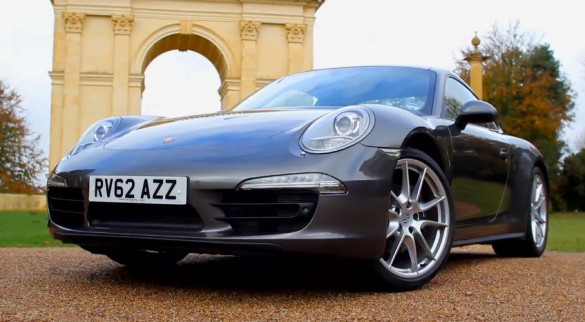 If you live where the weather gets cold and snow is a potential fact of life between Thanksgiving and Easter, chances are you view a sports car as a three-season luxury. As much fun as a traditional Porsche 911 is on dry pavement with sticky tires, it’s less than ideal for winter transportation, even when fitted with winter tires. No one sums this up better than the late Frank Zappa, who once penned “a cow don’t make ham.”

Or does it? Porsche’s 911 Carrera 4 is the German automaker’s answer to those who refuse to compromise on their ride due to geographical limitations, and it may just be the best all-weather, all-purpose sports car on the planet. While the previous version, the Type 997, had a distinctly different (and heavier) feel, Porsche’s Silverstone chief driving instructor Gordon Robertson explains that the new Type 991 Carrera 4 feel lighter and better balanced. It’s different, Robertson says, when it needs to be different.

The car can trace its lineage directly back to the legendary Porsche 959, which was originally developed for Group B rally competition. The 959 proved itself off-road by taking the first and second podium spots at the 1986 Paris-Dakar Rally. Later, the road-racing Porsche 961, also based on the 959, proved itself at the 24 Hours of Le Mans.

The first 911 Carrera 4 hit the market in 1989, and the car has continually evolved since then. One common element of all 911 Carrera 4 models is the red reflector line used to define the rear; in the new Type 991, this is now illuminated and used to accentuate the car’s wide-body design.

The new Carrera 4 will hit dealers in early 2013, packing a 3.4-liter flat-six engine good for 350 horsepower. If that’s not fast enough for you, the Carrera 4S will come with a 3.8-liter flat-six, rated at 400 horsepower. Both models are available with either a seven-speed manual gearbox or Porsche’s superb seven-speed PDK dual-clutch automatic transmission.