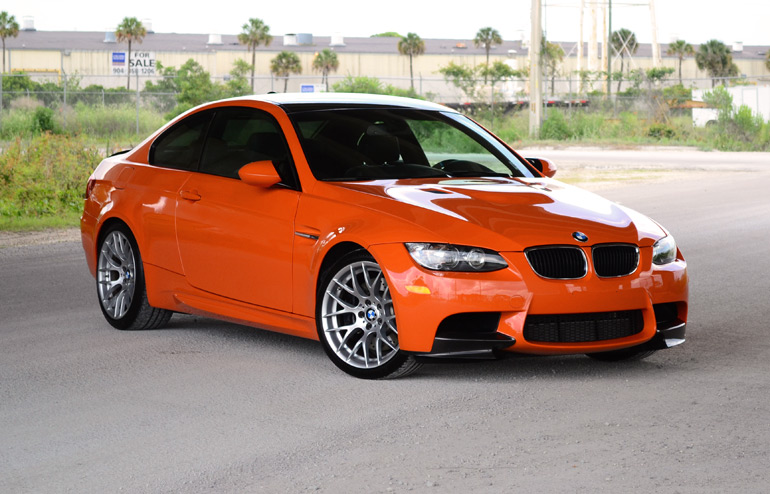 Ever since the conception of the current BMW M3, purists have had their short-lived doubts about the M3 still having its benchmark heritage that all started when German engineers wanted to turn a race car into something street worthy and comfortable enough for commutes. Today the latest BMW M3, making its last naturally aspirated run, still pays homage to its roots even if you need to dig a little deeper into its enthusiastic makeup and soft interior. 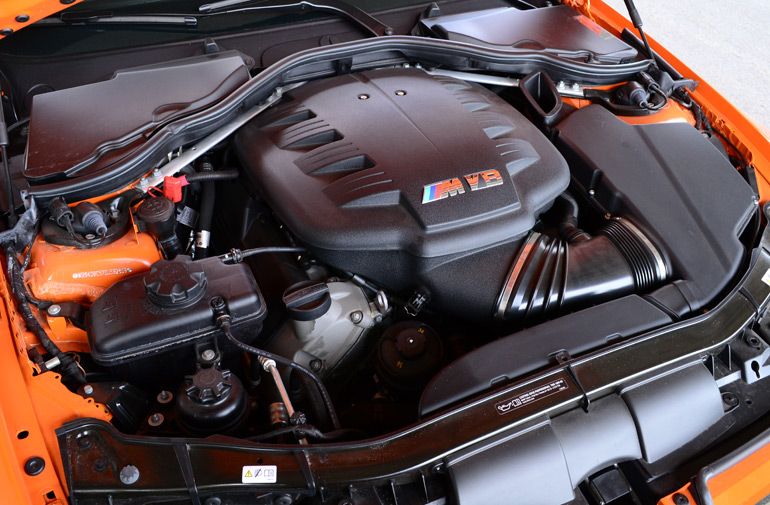 As far as having a soft approach to performance, the 2013 BMW M3 really makes its enthusiast oriented demeanor well known. The lofty 4.0-liter V8, revving to an astonishing 8,400 rpm, begs for punishment. It is the type of engine that happily endures through the pain of hammering through the rpm band as you row through the 6-speed manual transmission, of course after the dynamic rpm gauge has indicated proper operating temp by raising the redline to its designated position. Part of it asking for punishment starts with a light flywheel and ends with proper deceleration giving you optimal feedback and a resilient connection to the road, as expected from an Ultimate Driving Machine. 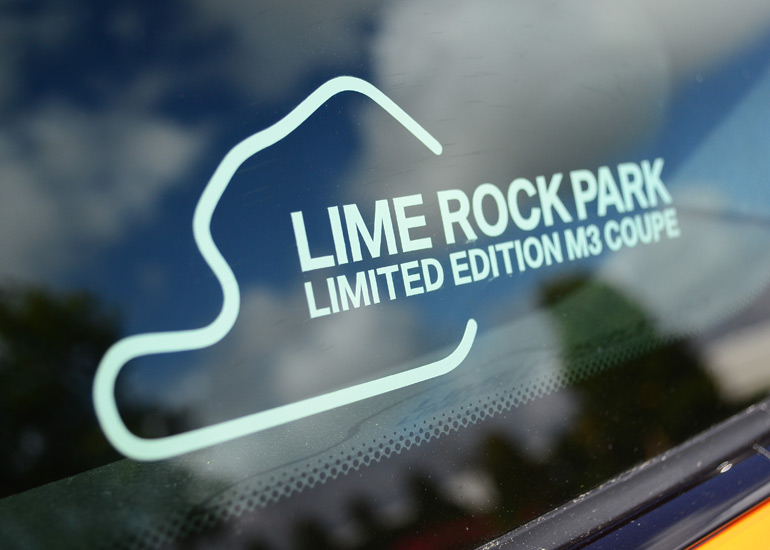 The all-new 2013 BMW M3 Lime Rock Park Edition is an exclusive one-off variation of the M3 for this year with only 200 fine examples produced. Having one of the 200 examples in my driveway shining bright in its Fire Orange paint job, brings about a certain critique of how different the Lime Rock Park Edition is from any other M3 that can be had from your local BMW dealership. Of course I would be misleading you by saying the Lime Rock Park Edition is just like any other M3, though you could easily argue the case being that its exclusivity remains limited to the flat-bottom alcantara steering wheel with a 12 o’clock blue stripe and the combination of the easily attainable Competition package, Fire Orange Paint, carbon fiber front air dam splitters and carbon fiber rear spoiler. Conveniently, the Fire Orange paint can be had on any M3 through special order, but you would miss out on having the Lime Rock Park Limited Edition M3 Coupe sticker in the rear driver’s window signifying its originality and paying homage to the Lime Rock Park Track located in Lime Rock, Connecticut – home to the beginnings of Skip Barber. 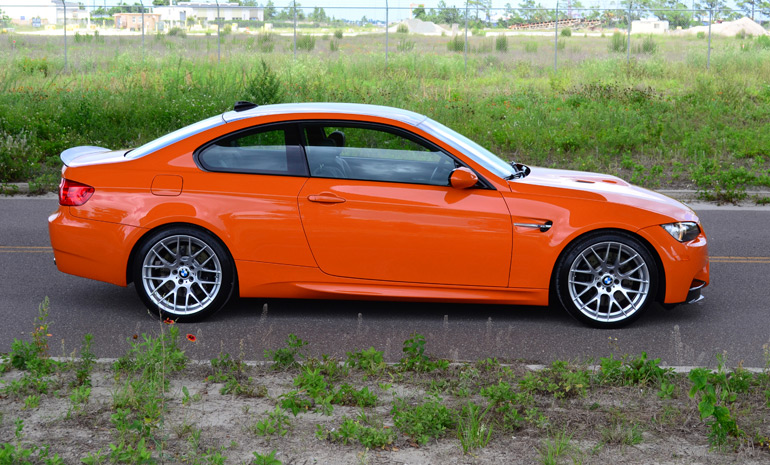 The proper nomenclature of the new 2013 BMW M3 Lime Rock Park Edition lies within every other new BMW M3’s race track aptitude. Of course there are other exclusive variations of the M3 for model year 2013 that can be had in limited production numbers as the E92-generation and naturally aspirated engine run comes to an end later this year. As possibly one last hurrah for the current M3, BMW puts forth efforts to inject a taste of the exclusivity found in their prided European BMW M3 GTS. Of course the GTS, only attainable across the pond, sports additional power and an onslaught of added track-focused goodies that can only dream up here in the states. What we do get in the current run of the M3 is the high-revving 4.0-liter V8 producing 414 horsepower at 8,300 rpm and 295 ft-lbs. of torque at 3,900 rpm. Of course pitted against other naturally aspirated V8 engines you would be right in your guestimation that the M3’s engine is a torqueless wonder but it makes up for it plenty with a smooth power delivery and high redline at 8,400 rpm. Output is enough to get things moving from 0 to 60 mph in as quick as 4.2 seconds. 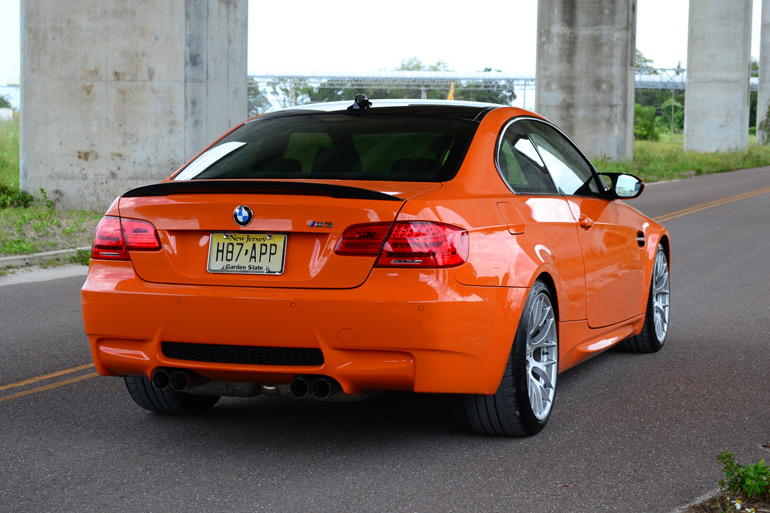 Most times any one-off special edition vehicle with a high performance attitude receives additional power. In the case of the exclusive-touted M3 Lime Rock Park Edition, BMW elects to keep the powertrain virtually the same but adds a titanium muffler to the mix for an intoxicating sound -possibly to signify you having one of the 200 examples of a “special” M3. As far as the M3 Lime Rock being special to someone, you would just base your common insight on any current M3’s performance capabilities and easy of transformation into a civilized and luxurious cruiser. 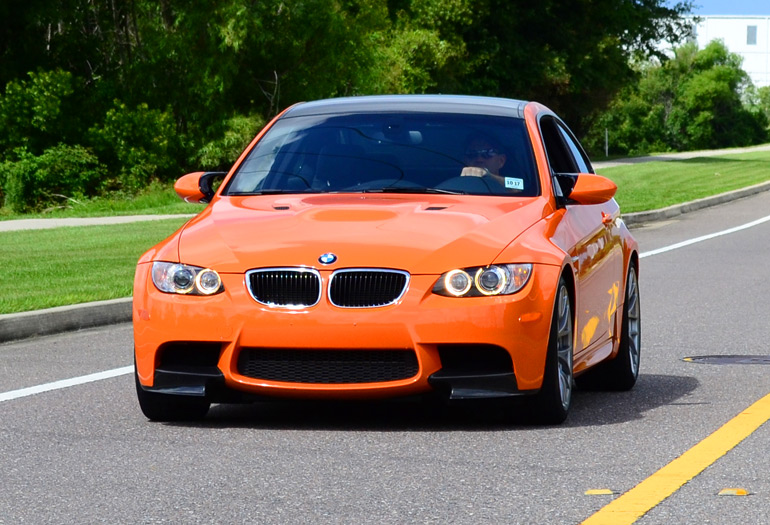 The heritage of the BMW M3, since the very first E30 M3 in 1985, signified BMW transforming a race car into a daily-commuter-worthy road car that you could take to the track on the weekends and then wear your suit and tie during the week. That common trait is still relevant in the current BMW M3 even though some have allowed its new plushness inside of the cabin to affect their initial perception. Thankfully after driving the 2013 BMW M3 those of us who appreciate and respect the perpetual benchmark for sports cars, can also find pleasure in the true abilities of the new BMW M3 underneath everything that makes this car pretty.

The 2013 BMW M3 Lime Rock Park Edition is a stunning vehicle not only because of its flamboyant exterior color, but due to the throaty-sounding exhaust and trumpet-playing intake manifold of the long winded V8 engine. A curb weight of 3,704 pounds for my M3 Lime Rock test vehicle equipped with a 6-speed manual transmission is hardly noticeable. The perfectly balanced 50/50 weighted chassis is a wonder allowing novice drivers to pilot the M3 through apexes with easy and confidence. At the press of the steering wheel ‘M’ button, the optional active dampers into put into their most aggressive setting while advancing the throttle input to give you a lively experience on and off of the track. Of course, with dynamic stability control disabled, you can dial-in as much oversteer as you want when the M3 begs for you to gracefully swing the rear-end out with the rpm gauge hanging anywhere in between 4,000 and 8,400 rpm. After spending a few minutes in the M3 power delivery becomes predictable and mostly addictive. 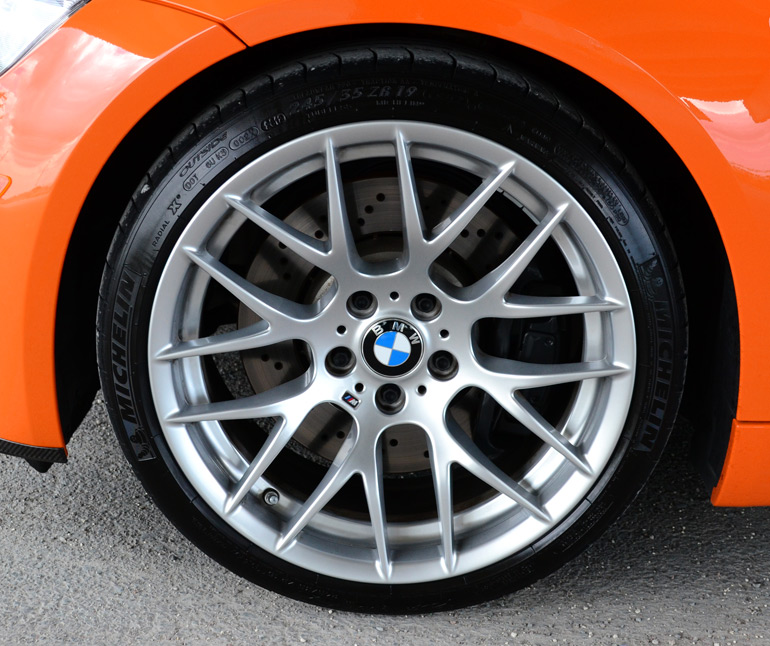 The Ultimate Driving Machine slogan is mostly prevalent when you strap behind the wheel of a new M3 and really push it in an attempt to find that high-strung limit. The sticky 19-inch 265/35 Michelin Pilot Sport tires in the rear and 245/35 up front, give the M3 a smooth yet assured ride where each instance of traction loss can be easily communicated so you are able to make proper adjustments in cases that the Dynamic Stability Control (DSC) is fully disabled. As far as traction control and dynamic stability control manage goes, the M3’s standard M Dynamic Mode (MDM), accessible through the steering wheel ‘M’ button, provides a slight delay before stability control and traction control steps in to prevent wheel spin or lateral body movement. The system does great for spirited driving around town but can be a serious damper to your best efforts put forth on the track. The system somewhat saps momentum between hard gear shifts by reducing throttle electronically, potentially reducing speed for a moment. Surprisingly, the system works very efficiently and effectively keeping the M3 in line and you out of a bad insurance claim. 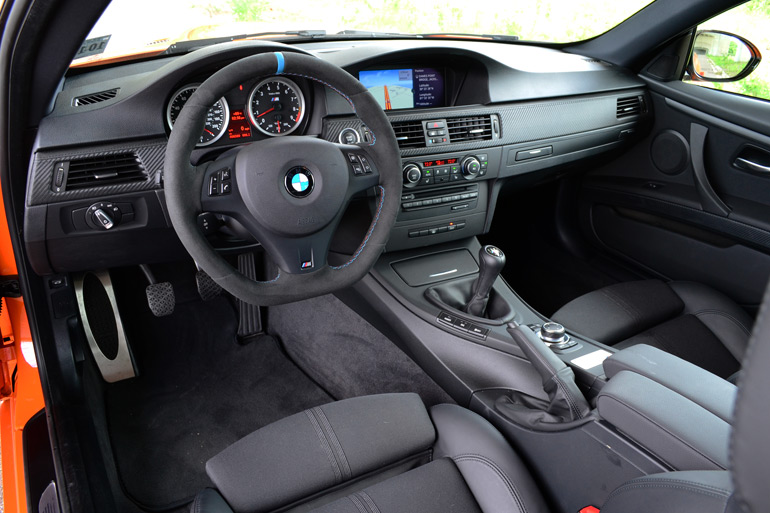 Comfort is the BMW M3’s alternate forte where the front passengers can really enjoy a relaxing and refined cabin, which made the M3 a unique offering for many years. Basically, it continues to provide a perfect balance between comfort and sport without too much compromise in either department. The inside of the 2013 BMW M3 Lime Rock Park Edition isn’t much of a dispensation from any other M3 with the exception of the sports steering wheel and Lime Rock Park Edition badging. Of course through customization the Lime Rock Park Edition M3 Coupe can get the 7-speed dual-clutch DSG transmission or have it like my test vehicle, the way purists like it, with the 6-speed manual transmission. The cabin, just like the driving character, can be a transformable entity where for a minute you are banging through the gears listening to the audible intake manifold runners sing you a song or the titanium muffler with M3 logos stamped on the tips growl a little bass in the mix. I assure you the M3 could be a desirable symphony for those who appreciate the sound and optimally tuned naturally aspirated V8 engine. The metallic clattering sounds during cold start-up and mid-range-throttle emit nicely into the cabin, just the way you want it. Though, traveling on the highway at a constant speed can transversely be an enjoyable experience as the engine delightfully purrs without much drone from the exhaust. 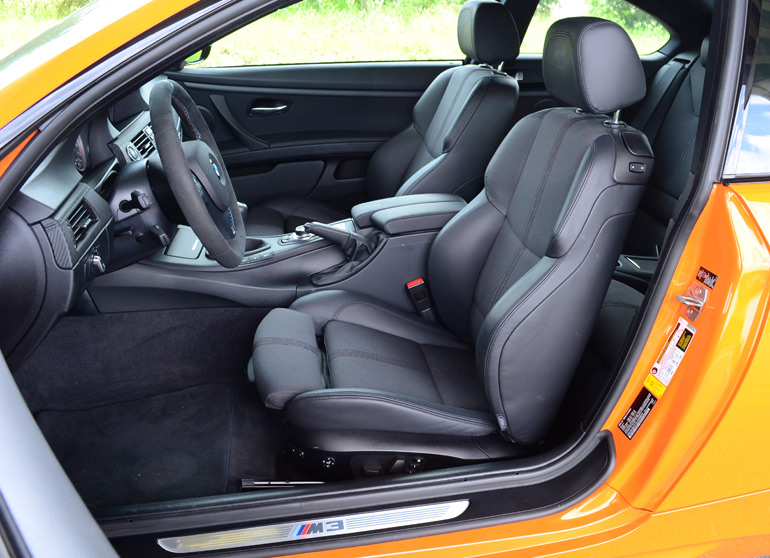 The front seats are a marvel in themselves whether you opt to have the cloth inserts and leather bolster areas (Anthracite & Black Cloth/Leather) or full extended leather blending subtly into the lower dashboard areas at an additional cost. In true BMW fashion, the M3 Lime Rock Park Edition can be configured with many optional amenities. Though, most of choosing a new M3 Lime Rock Park Edition will get you the upgraded Fire Orange paint and Competition Package including Dynamic Damper Control and 19-inch alloy wheels. Added on to my M3 Lime Rock Park Edition test vehicle was the Premium Package (power folding auto mirrors, comfort access keyless entry, power rear sunshade, power front seats, carbon leather interior trim, rear park distance control, navigation system, voice-command and real-time traffic information), heated front seats and BMW apps. Of course due to the fuel consumption of the high-revving V8 engine, getting an EPA estimated 16 mpg in the city and 20 mpg on the highway, there is a gas guzzler tax of $1,300. During my drive of the new M3 Lime Rock Park Edition, I took notice to being able to outdo the highway EPA estimate of 20 mpg highway. I yielded about 23 mpg on my highway excursions on a 40 mile trip hovering between 65 and 70 mph. Although, during my “exciting” city driving I saw about 14 mpg as I admittedly drove like a lunatic but as I attempted to keep things civilized I returned a respectable 17 mpg in city traffic. 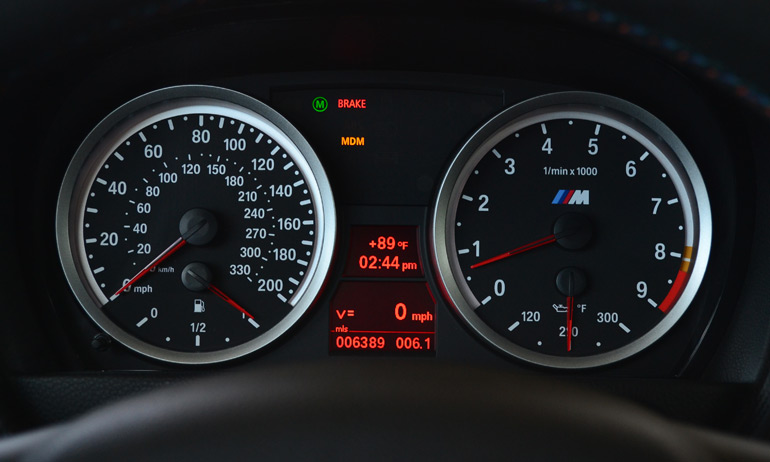 Standard start-stop technology is included with the new BMW M3, which is somewhat of a novelty when you consider how much gas you are burning as you rip to that high 8,400 rpm redline. Nevertheless, stopping the engine at the light, provided your foot is off of the clutch, may conserve a drop or two over several stops, just enough to for one gear change after money-shifting off of 8,400 rpm. Speaking of stopping, the large 4.2-inch front and 13.8-inch rear cross-drilled floating rotors and use of effective single-piston calipers bring the M3 to a stop from 70 mph to 0 in just 153 feet. 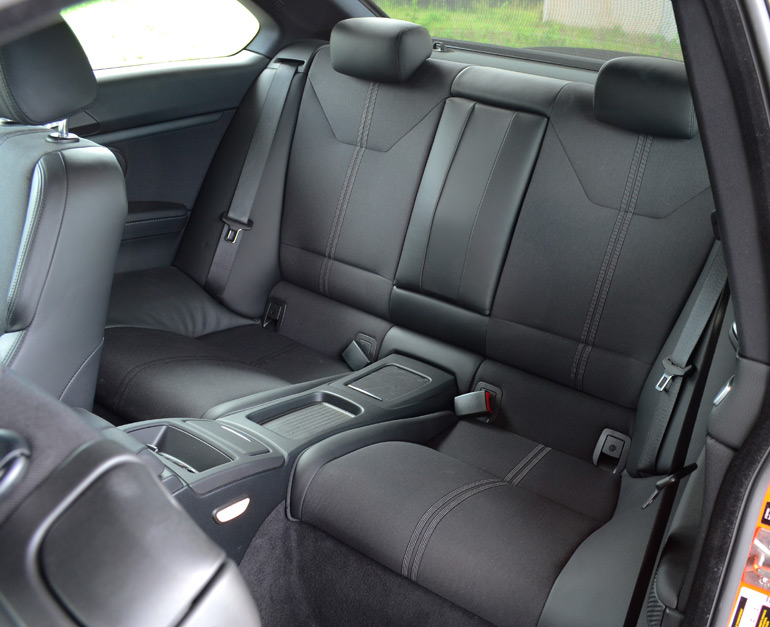 Probably the most difficult pill to swallow in the combined efforts of BMW to really give birth to something one-off from the rest of the M3 line, is the M3 Lime Rock Park Edition’s price starting at $70,100, which is $10,000 above the standard M3’s base price. With the added features on my test vehicle it brought the price to $77,395 including an $895 destination charge. Although some will have no qualms of adding a bit of extra water to get this price pill down, it still begs you to ask if deciding on the un-coated pill may have gone down just as easy and still have the same potency especially with no real performance advantage over the Lime Rock Park Edition exclusivity. Morpheus asks that you choose wisely.