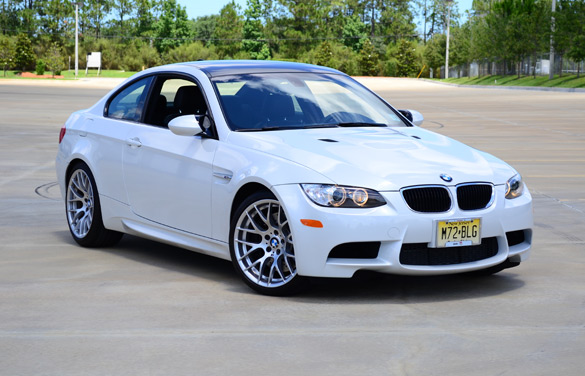 The BMW M3 remains to be the quintessential benchmark for sports and GT cars. At its largest size, the 2012 BMW M3 stays aboard the perfectly balanced scale offering enthusiasts with complete practicality while possessing the potential to take home both the fun-factor and track trophy.

The 2012 BMW M3 will be the last generation of naturally aspirated BMW Motorsport vehicles. With the upcoming BMW M3 going the way of forced induction, the current BMW M3 has a special disposition from its high-revving 4.0-liter V8. Although the 2012 BMW M3 is somewhat short on torque, only 295 ft-lbs., it makes up for the slight shortcoming with its extremely long legs reaching a lofty 8,300 rpm to produce 414 horsepower.

Ever since the introduction of the E92 body style BMW M3 (including E90 sedan) in 2008, just about every enthusiast eagerly anticipated the performance numbers on paper mainly because the M3 has been a benchmark for more than two decades. There are not many vehicles that can perfectly handle the task of every-day practicality, comfortable commuting, and the most demanding tracks with such style as the BMW M3. This year, in its last naturally aspirated run, the 2012 BMW M3 continues a tradition offering an incredibly balanced no-compromise vehicle that is among the best in the business at communicating the road to the driver. 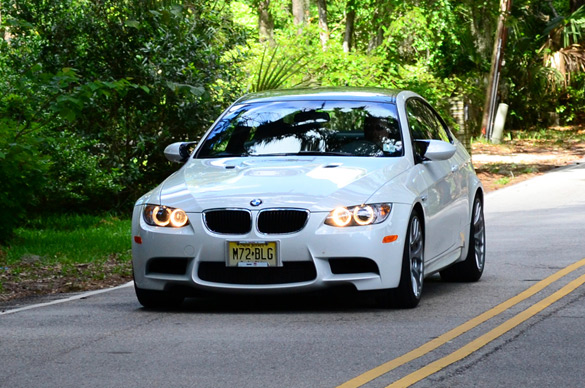 For 2012, the BMW M3 loses the E90 sedan but gains the standard features of a USB/iPod interface, Bluetooth, BMW Assist (BMW’s cellular-based ‘SOS’ roadside assistance) and an anti-theft alarm. It is hard to believe that the BMW M3 was never equipped with a standard alarm system and it has taken over 20 years to make such an option standard. Aside from the trivial options that really do not matter to die-hard enthusiasts, the 2012 BMW M3 remains virtually the same from the 2008 model year with the exception of a slight front fascia refresh in 2011.

There are very few vehicles that are as well rounded as the BMW M3. As you may already know from numerous reviews and track competitions pitted against the BMW M3, it is not the fastest car around nor is it the most sought-after sports car. For BMW, as I have come to learn in owning a BMW M3 myself, the M3 is a true drivers car. Basically, the M3 is perfectly suited for enthusiasts who appreciate attention to driving dynamics, balance, and every-day practicality wrapped up in an extremely stylish package. Not to mention, the BMW M3 is one of the best handling cars on the road today. 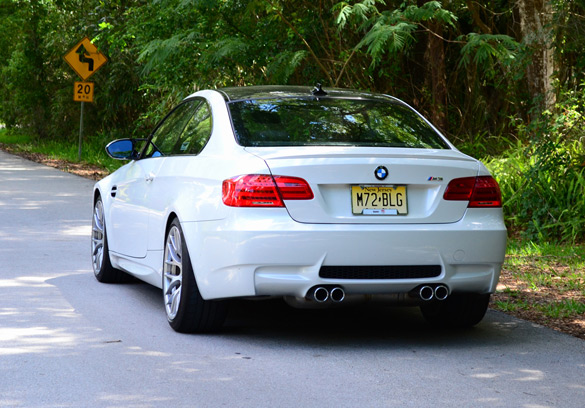 0-60 mph times for the current BMW M3 come in from various sources as fast as 4.2 seconds. I can honestly contest to the M3’s handling abilities with the optional dynamic damper control in the most aggressive mode bringing home a 1.00g on the skidpad. Even the brakes are stunning, to put it lightly. When pounded, the brakes are almost like landing an F/A-18 Hornet on an aircraft carrier. You can expect the single-piston calipers biting down on large 14.2-inch front and 13.8-inch rear cross-drilled floating rotors to bring all 3,704 pounds from 70 mph to 0 mph in only 153 feet. 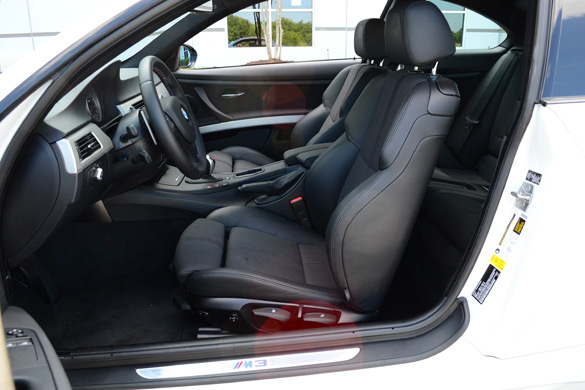 In true BMW fashion, the interior of the 2012 BMW M3 is much softer then previous generations but not overly plush taking away from the vehicles over-all demeanor. The seats on my M3 competition package test vehicle were exceptionally supportive and well enough bolstered for hard-core track days. The cloth inserts with leather bolstering is the ideal choice (standard equipment) if you do not care too much for full-leather seating surfaces. Even in manual seating control configuration, the M3 seats have plenty of adjustments and can be well suited for small to large sized adults.

Given the standard carbon fiber roof, adding extra stability and shaving weight, the interior headroom is plentiful for tall adults. Rear seating is a bit cramped, as expected. Although, if you choose to do so, the two rear seats can be useful provided the front seat occupants do not utilize all of the available 41.8 inches of legroom. 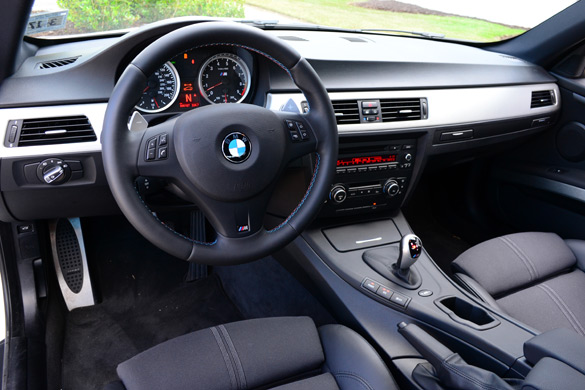 The driver and front passenger will be delighted with soft-touch dashboard materials everywhere with the exception of the deeply brushed aluminum trim. The thick padded and leather wrapped steering wheel, with the traditional red, blue and purple ///M color stitching, fits like a glove, literally.

In traditional German A la cart feature option selections, my 2012 BMW M3 test vehicle was short on gadgetry options such as the latest edition of iDrive with a high-resolution LCD wide-screen and integrated GPS navigation system. Additionally, my BMW M3 lacked optional park distance control and the premium audio system. However, having the competition package, my M3 was equipped with 19-inch light-weight Y-spoke alloy wheels and Dynamic Damper Control, which allows 3 different damper settings; comfort, normal and sport. 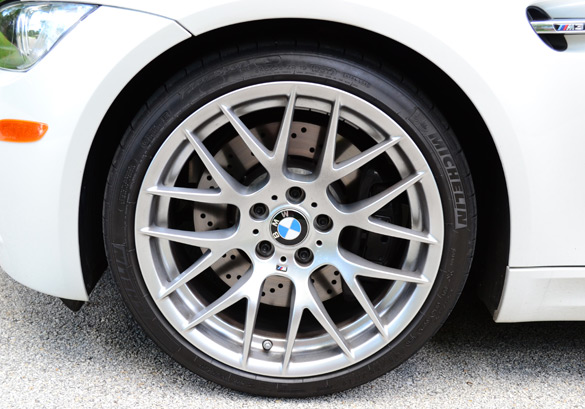 One particular option on my test vehicle giving the M3 a different character altogether, is the M Double-Clutch transmission, or DCT. The 7-speed dual-clutch transmission is quite snappy with its shifting when put in the most aggressive setting. Shifts are completed within milliseconds and downshifts are precisely rev-matched with an intoxicating audible exhaust and intake throttle blip sound. One thing to make a note of, the sounds from the M3’s V8 during cold startup, downshift and full throttle all the way to 8,300 rpm will bring a big smile to your face no matter how your day is going. All M3’s receive a limited-slip differential, 18-inch wheels, auto xenon headlights, auto wipers, leather-cloth upholstery, Bluetooth, BMW assist telematics, single-CD HD radio and USB/iPod/Aux connectivity.

To get down and dirty without entering the nearest ditch, depressing the M button on the steering wheel will setup the vehicle in full-sports mode for the dampers, throttle input and dual-clutch transmission within the limits of a M-dynamic traction control and stability control setting. The dynamic setting allows for a slight delay of when the stability control will intervene. Completely shutting off stability and traction control, at the press of a single button for 3 seconds, will allow you to find out how well balanced the M3 is followed by trails of smoke from the rear wheels. Saying that the M3 is balanced is almost an understatement. Having had the time to visit a closed course, I was able to experience forehand how well the 2012 BMW M3 is dialed in for being a true driving machine. The steering rack is perfectly weighted and the chassis’ near 50/50 weight distribution permits easy drifts and follow-through on extreme oversteer excursions. When compared to the standard 6-speed manual gearbox, the DCT transmission helps the driver focus on demanding tracking situations- something trendy for less experienced drivers. 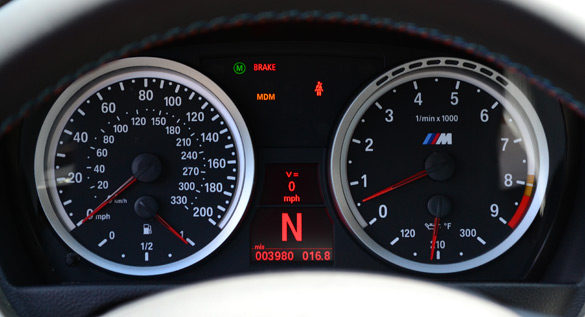 The BMW M3’s highway attitude is not too aggressive for comfy daily commutes, especially when the dynamic dampers are in comfort mode. Fuel consumption is a bit on the bad side with the new M3 getting only 14 mpg city and 20 mpg highway. However, I did notice considerably better fuel consumption on the highway averaging about 23 mpg when I limited banging through the 7-speed transmission’s lower gears. The high-revving V8 still provides enough grunt in 7th gear to over-take cars on the highway with great ease. A start-stop feature, added as standard equipment during the 2011 model facelift refresh, is a nice addition for automatically switching off the engine when the vehicle comes to a halt to save fuel. Simply letting off of the brake pedal quickly re-starts the engine. I found the feature to work virtually seamlessly while keeping the a/c fan and all accessory power running. 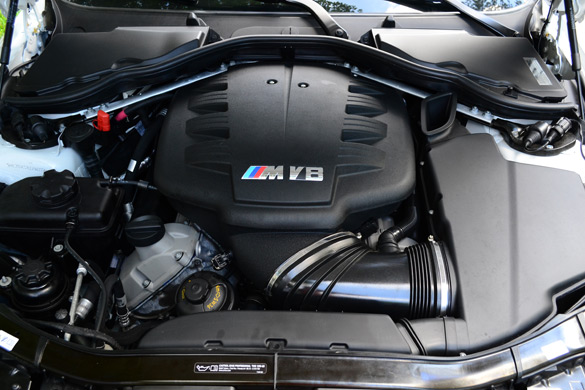 Seeing how the BMW M3 has evolved over the years becoming a ‘better’ vehicle in everything that it is designed to do, gives me pleasure in knowing the M3 is still a benchmark that others are still attempting to outdo. Modest pricing remains to be more of an opinion when it comes to the new M3 mainly due to the fact that it competes with cars almost twice its price. My 2012 BMW M3 competition package w/ DCT has an as-tested price of $69,595, which included a $1,300 gas guzzler tax. As a comparison with the M3’s direct competition, the new Benz C63 AMG Coupe has a starting price of $61,430, while a base M3 can be had for $60,100. At whatever price, the new BMW M3 is the best handling production M car to come out of BMW thus far.