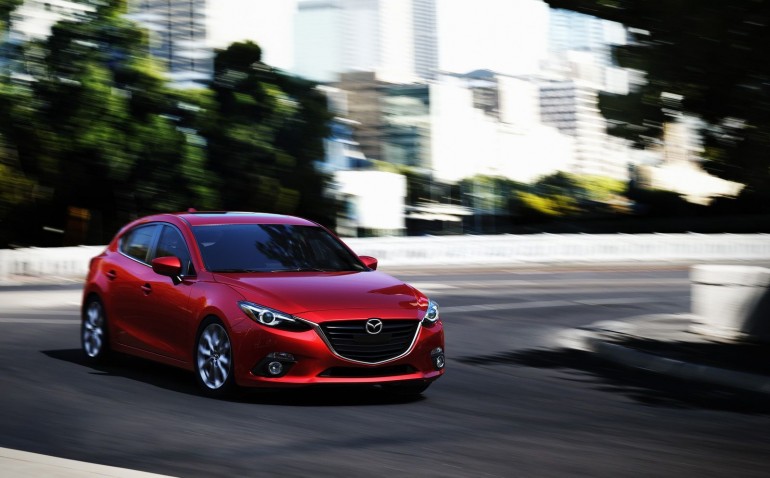 NEW YORK (June 26, 2013) – The all-new 2014 Mazda3 compact five-door was revealed to the world today during an event in Manhattan’s Chelsea neighborhood.  After weeks of media speculation and numerous “leaked” images of enthusiast renderings, Mazda North American Operations (MNAO) pulled the sheet off the highly-anticipated redesign and confirmed the car will be on sale this fall.  The all-new Mazda3 is engineered with the full complement of SKYACTIV®[1] technologies – a proprietary suite of fuel-efficient, performance-driven components and manufacturing philosophies – as well as the handsome styling of the KODO design language.  Other launch events also were held in Melbourne, Istanbul, St. Petersburg and London to debut the new vehicle, as well as celebrate the 10th year of Mazda3 production.

“With more than 3.5 million vehicles sold globally, the Mazda3 is the brand’s best-selling and most recognizable name plate, and its redesign for 2014 shows just how much attention to detail and care we put into this important vehicle,” said Jim O’Sullivan, president and CEO, MNAO.  “SKYACTIV TECHNOLOGY and KODO have performed as advertised and received critical acclaim, with even more technologies and materials to be introduced with the 2014 Mazda3.  On the heels of the launch of the 2013 CX-5 compact crossover SUV last fall and the 2014 Mazda6 early this year, this is an exciting time for Mazda, and we’re only getting started.”

Lower and leaner than its predecessor, this third generation Mazda3 shares almost nothing with its older siblings other than a name.  All new from the ground up, the 2014 Mazda3 sits on a wheelbase of 106.3 inches, which is 2.4 inches longer than the previous generation, yet the five-door  is 1.8 inches shorter in length at 175.6 inches.  With a height of 57.3 inches and a width of 70.7 inches, the Mazda3 reduces its ceiling by 0.6 inches and gains 1.6 inches in the hips while retaining similar headroom space and offering rear legroom at 35.8 inches.  The rear seatbacks are nearly 2.0 inches taller for added passenger comfort.  Front and rear shoulder room also has increased to 57.2 and 54.4 inches, respectively.  This efficient use of space is wrapped in the increasingly striking dimensions of KODO, Mazda’s “Soul of Motion” approach to designs that exude emotional proportions and refined strength.

Expressive and Enticing, Inside Out

From the dynamic signature wing of the five-point grille to the expansive sheet metal cresting over sleekly slanted headlamps, from the wide-stance muscular fenders to the taut character lines flowing from panel to panel, sculpting into a chiseled rear featuring provoking taillights, KODO begets the Mazda3 a presence unlike any other.  Yet such style is not without purpose as the five-door and sedan models achieve best-in-class coefficient of drag (Cd) at 0.275 and 0.255, respectively, when equipped with i-ELOOP and an active grille shutter.  A new-to-Mazda feature, an active grille shutter is mounted in front of the radiator and automatically opens and closes in accordance with driving conditions to improve aerodynamic performance while contributing to real-world gains in fuel economy.

The interior is no less impressive, starting with the driver-oriented cockpit.  The pedals have been laid out symmetrically to the left and right of the driver’s center-line with a hinged organ-type accelerator pedal as standard for added safety and comfort.  Designed not only to appeal to the senses, each control and function also is specifically placed with intuitive utility in mind.  The less time spent focusing on adjusting knobs and tapping touch-screen commands, the more time a driver is engaged with the actual act of driving, being alert to what is on the road ahead and, therefore, being able to react quickly, accurately and safely.

All-new for Mazda vehicles and being launched with the 2014 Mazda3 will be a next-generation human-machine interface (HMI) system.  Based on the heads-up cockpit concept, the new HMI system aims to help drivers maintain proper posture, concentrate on the road and drive more safely, even while handling larger amounts of information.  The information used is divided into groups, and an innovative screen layout is employed to let the driver safely balance the primary job of driving with other peripheral information.

The 2014 Mazda3 also is the first vehicle to feature Mazda’s all-new Active Driving Display, a clear pop-up panel that displays vehicle speed, navigation directions and other important driving information, and is vertically mounted behind the meter hood.  This feature not only places necessary information comfortably in the driver’s line-of-sight but also directs the display beyond the instrument panel, more in line with where a driver’s eyes are naturally focused.  The Active Driving Display panel will automatically fold back into a hidden position when the ignition is shut off.

The redesigned meter cluster features a centrally positioned analog gauge flanked by a pair of wing-shaped digital displays.  The dial face for the center gauge is characterized by three-dimensional metallic numerals, evidence of the design teams’ attentiveness to detail, while its red-ring border pulses as soon as the driver’s door is opened, a nod to the vehicle’s inescapable sporty DNA.  From the gauge clusters extends a decorative dash panel finished in satin chrome with piano black trim pieces adorning select areas of the center console and front door inserts.

The seat architecture has been redesigned with added focus on comfort and space, while at the same time reducing weight.  For example, the front seat backs were further sculpted to provide rear seat passengers more knee room than the previous generation Mazda3, and shoulder room for all passengers increased as well.  Additionally, the driver’s seat cushion was made larger, while still optimizing the seat back to create a more natural seating position with ample lateral support, a welcome adjustment for those prone to long drives.

Available in cloth (Black, Sand), leatherette (Black) and leather (Black, Almond) seat materials, the multitude of exterior and interior color combinations and accents further showcases the attention made to the finer touch points and to the varying degree of consumer preferences.

Stay Connected While On the Go

Mazda’s infotainment system receives its own sort of overhaul as well.  With the increasing popularity of smartphones and tablet computers, lifestyles, and subsequently driving habits, have changed.  To ensure that consumers can continue to be connected in real time with their online community regardless of where they are, Mazda has developed is new operating system to be intuitive and less distracting, which leads to an overall safer and more pleasurable driving experience.

The new operating system connects via Bluetooth® to a smartphone and can easily be updated to ensure users always have access to the latest features and services without the need to swap out hardware.  In addition to the current music access points via standard AM/FM radio, CD and USB/auxiliary port connections and premium content such as Sirius® Satellite Radio, new features such as internet-based apps Aha by HARMAN™ will be available.  An optional Bose® premium audio system with Centerpoint® 2 virtual surround sound playback will bring the harmonies and vocals to life for even the most discerning of audiophiles.

The system also can read email and short messages aloud while the vehicle is in motion using text-to-voice technology.  Short Message Service (SMS) messages can be received and shown on the touch screen monitor.  The system can then articulate the messages as well as allow users to send replies using fixed phrases.  A new speech recognition system also allows users to repeat and shuffle audio tracks, as well as search and select folders.  When connected with a smartphone, Twitter® and Facebook updates can be read by the system with audio responses available using the Shout function.  The system also allows users to search the internet for locations and map directions.  An SD card-based navigation system is optional.

The long relationship between Mazda, the brand, and Zoom-Zoom, the anthem, is no secret. Jinba Ittai, the oneness between car and driver, is a long-standing brand philosophy, an essence, which is built into every Mazda ever engineered – whether for leisurely drives within the cul-de-sac community or hot laps around a track.  With the Mazda3, a vehicle that is sold in more than 120 countries and accounts for 30 percent of the company’s annual global sales, this connection is even more important and made even more precise.

The 2014 Mazda3 will be available with a choice of the SKYACTIV-MT six-speed manual and SKYACTIV-Drive six-speed automatic transmissions.  SKYACTIV-MT offers the short, crisp shift pattern reminiscent of the MX-5 Miata.  SKYACTIV-Drive achieves a direct shift feel and quick gear changes that contribute to quick acceleration, while maximizing the best features of a direct-shift gearbox and a conventional torque-converter system.

Mazda’s unique i-ELOOP brake energy regeneration system employs a capacitor to store electricity generated when the vehicle decelerates.  Brake energy regeneration systems improve fuel economy by reducing the inherent parasitic drag of the alternator when possible, to maximize the efficiency of the vehicle under all modes of operation.  Unlike other battery-based systems, i-ELOOP, its name derived from “Intelligent Energy Loop,” is the world’s first capacitor-based system to power all of a vehicle’s electrical components.

The added combination of the SKYACTIV-Body and SKYACTIV-Chassis enhances the Jinba Ittai spirit by offering high-performance, lightweight materials for added strength and safety.  Carefully engineered load-transfer ensures a firm grip on the road that the driver can sense.  The SKYACTIV-Body provides increased rigidity of 30 percent compared to the previous model while reducing weight as well.

Although variable from market to market, the expanded use of high tensile-strength steel, and the complete reevaluation of more than 300 separate components, has led to significant weight savings.

Straight line stability, tire grip and ride comfort have been greatly improved by tuning the suspension system’s springs, dampers and stabilizers.  Mazda’s new mechatronic column-type electric power assist steering system is compact and lightweight, with a gearing ratio of 14.0:1.  The brake response also was improved to be even more responsive, allowing for excellent vehicle control and feel as well as a braking distance amongst the best in the segment.  Such improvements also reduce rolling resistance, all improving fuel economy.

A new lightweight material that exhibits a high level of noise absorption is introduced on the dash insulator and floor mats, and insulating material also is positioned for maximum effectiveness behind the instrument panel.  These measures achieve a level of cabin quietness that is highly competitive within the compact car class, and fully comparable in a class-above vehicle.

i-ACTIVSENSE.  These technologies use sensing devices such as milliwave radars and cameras to support the driver in recognizing hazards, avoiding collisions and minimizing damage, should accidents occur.  While these systems will not eliminate accidents, their intent is to minimize them and reduce the severity of a crash.

The features available under i-ACTIVSENSE for North America are:

Mazda Proactive Safety is Mazda’s development concept, and it aims to help the driver avoid dangerous situations before they occur by minimizing the risks that can lead to an accident.  Additionally, it maximizes the range of conditions in which the vehicle can be driven safely and with peace of mind.

Mazda North American Operations is headquartered in Irvine, Calif., and oversees the sales, marketing, parts and customer service support of Mazda vehicles in the United States and Mexico through nearly 700 dealers.  Operations in Mexico are managed by Mazda Motor de Mexico in Mexico City.  For more information on Mazda vehicles, including photography and B-roll, please visit the online Mazda media center at www.mazdausamedia.com

[1] SKYACTIV is a registered trademark of Mazda Motor Corporation (MC).