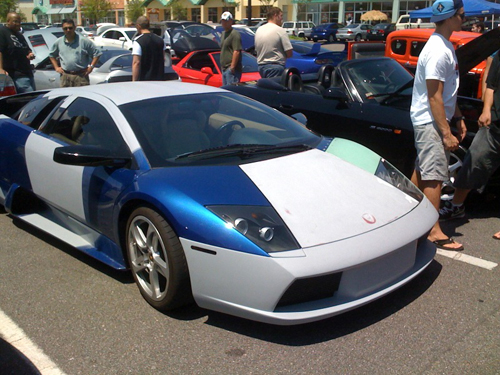 Over the weekend I had a chance to go by a car show for the life celebration of a fallen biker that worked at one of the local restaurants in Jacksonville, FL. The owner of the same restaurant, who set up the car show, happens to own a few eye-catching vehicles including 900+hp Toyota Supra Turbo and a 3rd gen RX-7 with a Chevy LS1 engine swap. His vehicles, among others, were major highlights of the show until a blue, or what used-to-be blue, Lamborghini Murcielago pulled up into the parking lot. It immediately drew everyone’s attention because of the way it looked… like no other Lamborghini I had seen. This one was truly different. Sad to say, this poor Murcielago had seen its better days. It was a truly despicable and a very sad sight to see. Come to find out, it is a salvaged Lamborghini Murcielago. To this day, I always thought that when a car of this stature was in an accident, as severe as a “roll-over”, it would be considered totaled-out. What kind of image is this for Lamborghini? Maybe there is a specific reason for rebuilding this car or it could be possible that it did not suffer enough damage to scrap it. But why would you bring it to a car show in this kind of condition?

The good part about this story is they were able to raise money to send to the fallen biker’s family to help pay for previous medical bills accumulated during the time in the hospital.