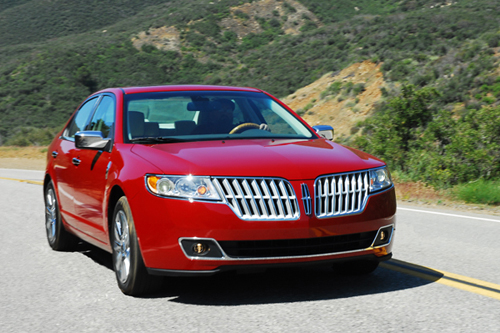 Lincoln was listening in 2008 when it first launched the MKZ luxury sedan. It had just enough luxury and elegance to be labeled ‘entry-level’ luxury, and now we have a more refined, truly luxurious and elegant model for 2010.

Increased luxury and power are readily apparent and available in the 2010 Lincoln MKZ, as customers are pampered with signature high-end features and a faster-accelerating and noticeably quieter luxury interior. The 2010 model boasts a wide range of exterior and interior refinements-including premium Bridge of Weir leather-wrapped seats-as well as a new sport version for those customers desiring an even more engaging driving experience. 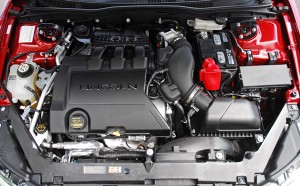 The award-winning 3.5 liter DOHC Duratec engine powers the 2010 MKZ, delivering 263hp at 6,250rpm and 249lb.ft. of torque at 4,500rpm while still remaining among the leaders in fuel economy in the segment with 18mpg/city and 27mpg highway for the front-wheel-drive MKZ.

The 3.5 liter uses a compact, lightweight DOHC valvetrain for peak power and smooth operation at high rpms. This all-aluminum engine also incorporates intake variable cam timing for smooth idle and an impressive broad torque curve with good power. The six-speed SelectShift Automatic transmission, which is front-wheel drive and optional all-wheel drive is standard on all 2010 MKZ’s. Powertrain performance is improved dramatically with 0-60mph dropping from 7.7sec. to 7.1sec.

The engine-and the MKZ itself-is quieter. Nearly every piece of the sound deadening package was redone. The MKZ engineering team also concentrated on the engine mount subsystem, finding the sound that balances sportiness and luxury. A high 10.3:1 compression ratio and aluminum cylinder heads designed for high air flow and optimized combustion help complete the package, supporting the engine’s ability to deliver great performance and fuel economy along with low emissions.

The six-speed transmission is outfitted with lower early gears for better acceleration and taller high gears for better highway mileage. The new standard SelectShift automatic provides the driver with manual gear selection for enhanced sportiness. Downshifts are locked out to protect the engine from over-revving. The ‘enhanced overdrive cancel’ mode locks out the fifth and sixth gears, allowing shifts at higher speed for more engine braking and downshifts for ‘grade assist’ functionality. 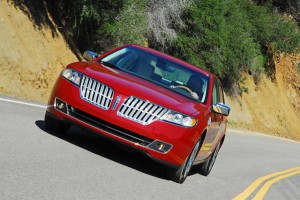 The 2010 MKZ’s fully independent suspension was completely revised and uniquely tuned for ride comfort. The team changed the rear suspension’s lower control arm point to move the roll center closer to the center of gravity, which improves ride-handling characteristics. The turning circle has been reduced as well. Also added is a new hydraulic variable-flow steering pump to the power-assisted rack & pinion system that changes the flow rate at lower speed to give better response and parking ease.

The MKZ’s optional AWD system that I tested has been retuned for better traction and lower noise, vibration and harshness (NVH). The new system uses an electro-mechanical clutch and employs two basic modes of torque transfer-preemptive torque (before wheel slip) and slip-control torque (after wheel slip). This dual system gives you more confidence in any situation, while the suspension has been specially tuned to be more neutral when cornering. Driving around slow city traffic, merging into fast moving freeways and when cornering on the back roads was seamless and smooth with all four-wheels adding torque.

The AWD system works in harmony with brake traction control to deliver more confidence to MKZ owners. Ford’s AdvanceTrac with electronic stability control-which is standard in the 2010 model-keeps you in command at all times. 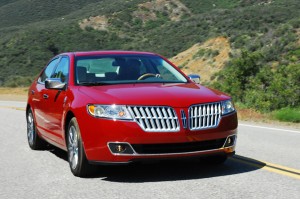 Refinements to the powertrain are complemented by improvements to cabin noise levels.
Ford research shows the 2009 MKZ beating the current model year Lexus ES350 and Acura TL in key interior quietness such as road noise at 30mph. For the 2010 model year, the MKZ is even quieter. In addition to reengineered resonators on the air-induction system that improves overall powertrain sound quality, the 2010 MKZ benefits from NVH improvements that include a new acoustic laminated windshield that features a layer of sound-absorbent vinyl sandwiched between two sheets of glass to soften noise levels, improved body/door sealing to reduce wind noise, new expandable stuffers in the fenders and pillars, constrained layer damping material on the entire floor to reduce road noise, and an all-new acoustic headliner to further deaden interior noise. 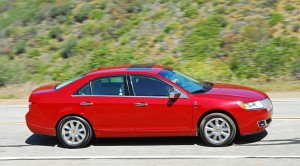 These measures prove their worth in wind tunnel testing when the MKZ was subjected to 80mph gusts at varying degrees of yaw (to simulate head/cross winds), and bested both the current model year Lexus ES350 and Acura TL across the board for the lowest recorded loudness-regardless of yaw variation.

The new 2010 MKZ also offers segment-exclusive features such as a first-in-class Blind Sport Information System (BLIS) with Cross Traffic Alert (CTA), which makes navigating traffic and parking lots safer and easier. BLIS tracks vehicles in the blind-spot zones on either side of the car using two multiple-beam radar modules behind the rear fenders. Indicator light in the outside rearview mirror on both sides of the car warn you when a vehicle enters the defined blind-spot zone, extending from the side mirror to 10ft. behind the vehicle and 10ft. away from the car. CTA uses the BLIS radar sensors to alert you of approaching traffic while in reverse and backing out of a parking spot. CTA tracks up to 65ft. on either side of the car and warns you through both audible and visual alerts.

In addition to this new technology for midsize sedans, MKZ offers SYNC with 911 Assist and Vehicle Health Report, Next-Generation Voice-Activated Navigation, keyless entry, Easy Fuel Capless Fuel-Filler System, THX-branded audio and adaptive HID headlamps that make the new MKZ one of the most highly-technologically advanced luxury sedans on the market. 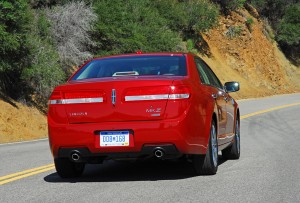 The MKZ also features new, more contemporary styling including the split-wing grille and thinner wraparound headlamps for a wider, sportier look plus added elegance with a chrome strip surrounding the grille and lower air-intake. Its chamfered front fascia also shares a family resemblance with the all-new Lincoln MKS, with a sculpted hood and ridges flowing into the A-pillar. In the rear, the MKZ features a new decklid with wider LED taillamps accentuating the width of the car and separated by the Lincoln star. The 2in. round, polished stainless steel exhaust tips give drivers behind you a hint of the performance potential of the car a head of them.

Inside, MKZ’s cabin reflects an even more upscale look featuring high-quality soft touch dashboard, with genuine aluminum, chrome and wood depending on the trim package selected. The thinner wood trim pieces are encased in chrome for a more elegant look and feel. The new instrument cluster is more elegant and detailed, and there is new welcoming lighting, chimes, tuxedo stitching on luxury leather seats and 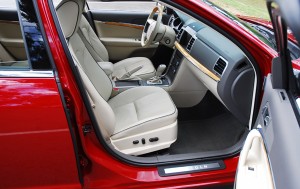 Bridge of Weir leather. The MKZ leather is unembossed, allowing the natural beauty and character of the grain to shine through. The leather is milled for up to 12-hours to ensure a buttery soft hand, and Bridge of Weir uses a chromium-free tanning process which makes it easier to recycle. This new design with higher grade materials and controls really lifts the important interior to world-class status.

The integrated DVD player is capable of reading CD-Audio, MP3 CDs, DVD, DVD-Audio and DVD-ROM (for digital map updates). A music jukebox function stores more than 150-hours of music. The screen can be customized with personal photos.

The reverse camera system mounts a small camera on the decklid that is activated when the MKZ is shifted into reverse, giving you a clear view behind the vehicle. The video image is displayed in the navigation 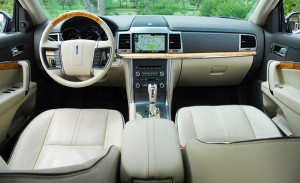 screen on MKZ’s equipped with that option or in the self-dimming rearview mirror on vehicles without navigation. Ambient lighting is displayed around the footwells, cupholders, door map pockets, door release handles, door and instrument accents and scuff plates-plus special ‘Welcome’ and ‘Farewell-sequential lighting.

The optional THX II premium certified audio system with 5.1 surround sound is provided by a 12-channel amplifier that delivers 600-watts to 14-strategically placed speakers, including two subwoofers. A center channel speaker array features THX Slot Speaker technology, which allows for a wider sound image and better control of how music is distributed throughout the MKZ’s 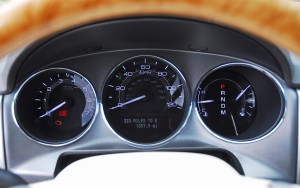 acoustically engineered cabin. In addition the system features a 10GB drive jukebox, allowing MKZ owners to store up to 2,400 favorite music tracks. The THX II system is one of the world’s unique and best sounding music systems.

Other features for the 2010 MKZ include rain-sensing wipers, a new cabin air filter, adaptive HID headlamps, and SOS Post Crash Alert System which activates the horn, emergency flashers, automatically unlocks doors and turns on the interior/puddle lamps when an airbag is deployed. The system even activates the emergency flashers when a spinout is detected. 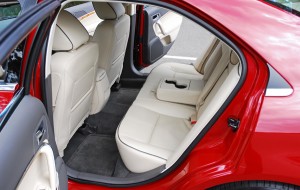 The new MKZ contains a full complement of standard safety features including front/rear crush zones, steel beams in each door, front and side airbags, side-curtain airbags for the first and second row seats, tire pressure monitoring system, and 5-seat belts with load limiters and pretentioners up front. 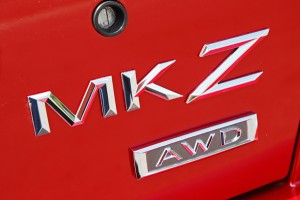 The new 2010 Lincoln MKZ felt like an all-new model with more elegant styling, quicker acceleration, a smoother ride with better handling and a world-class interior making the car more competitive against the M-B C-Class, BMW 3-Series, Audi A4, Lexus IS, Infiniti G, and Cadillac CTS. I was really impressed with the new MKZ.