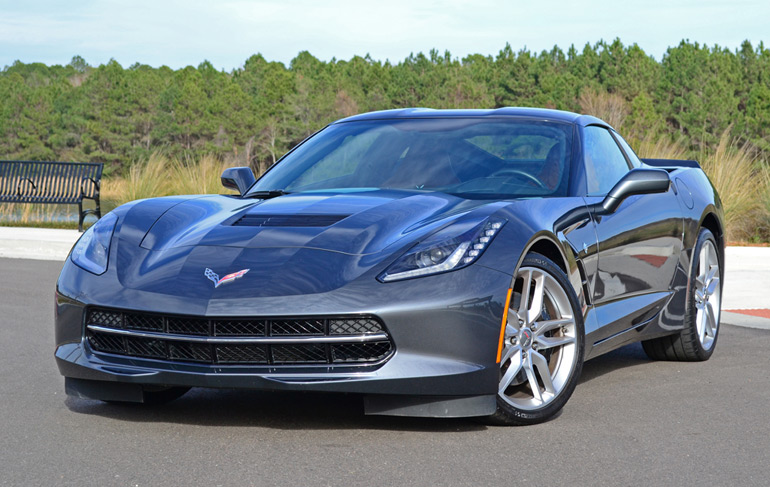 The iconic Chevrolet Corvette has captivated enthusiasts for many decades but now the captivation takes a new road, one that has redefined the Corvette’s purpose as a true American sports car deserving of the North American Car of the Year award. After spending just about a week behind the wheel of the all-new 2014 Corvette (C7) Stingray, I can walk away with the certainty of knowing that it is at the top of its game in the scope of sports cars with an added and unsurpassed value without compromise. 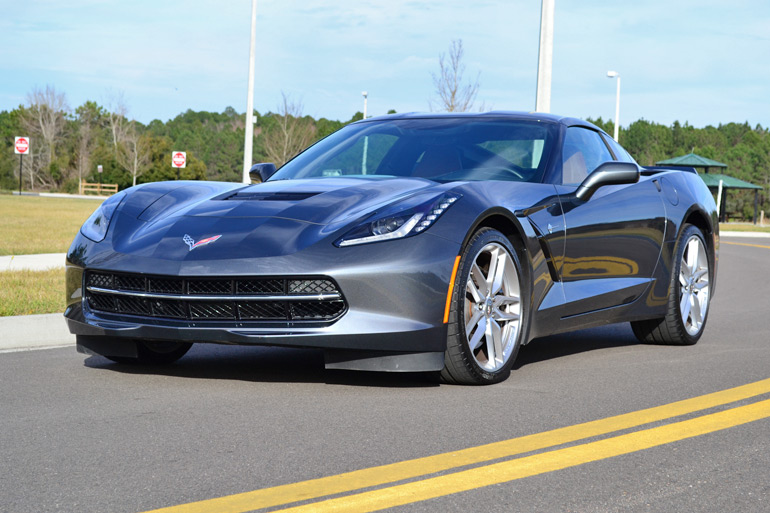 The all-new 2014 Chevrolet Corvette Stingray carries is iconic name proudly with its unmistakable styling in one hand and in the other a massive iron hammer of shear performance. To start things off the proper way, jumping to the stats that matter to enthusiasts, the new Corvette Stingray with the Z51 package reaches 60 mph in just 3.8 seconds. Additionally, it holds its lateral movements with a force of 1.08g, reaches a top speed of 190 mph (est.), and does all this while the driver and passenger bask in a cabin full of leather, brushed aluminum, carbon fiber dashboard trim, delightfully accented stitching throughout, heated and cooled seats, and a limited amount of soft-touch plastics. No longer is the Corvette getting ridiculed for a lackluster interior, the new Stingray exudes quality craftsmanship, functionality for two occupants, and enough gadgetry to keep your techie senses happy on twisty roads, highways and the track. 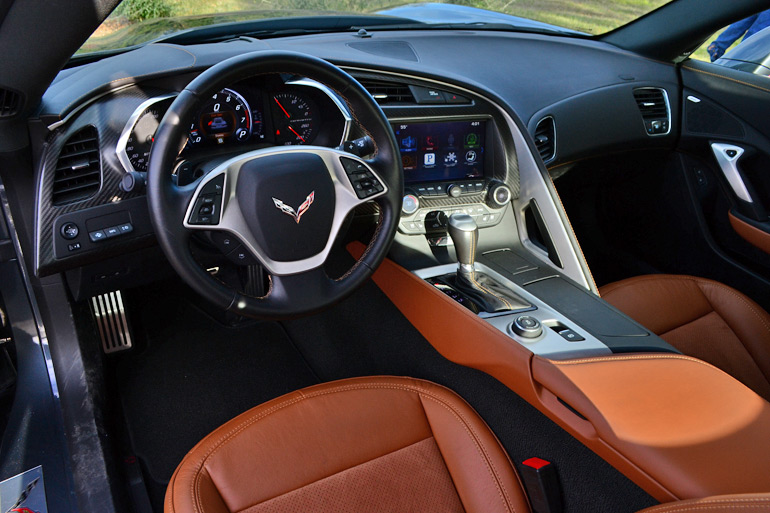 When we first drove the all-new 2014 Corvette Stingray in Miami several months ago, we knew Chevrolet had something special and it made us feel proud to be American all over again. Our drive at that time was very limited so we could not conclude our thoughts without taking the new Corvette Stingray home with us. Fortunately, I had the opportunity to spend a little more quality time with the new Stingray and I have walked away giving the proper respect and honor to a serious sports car on the road that means business. 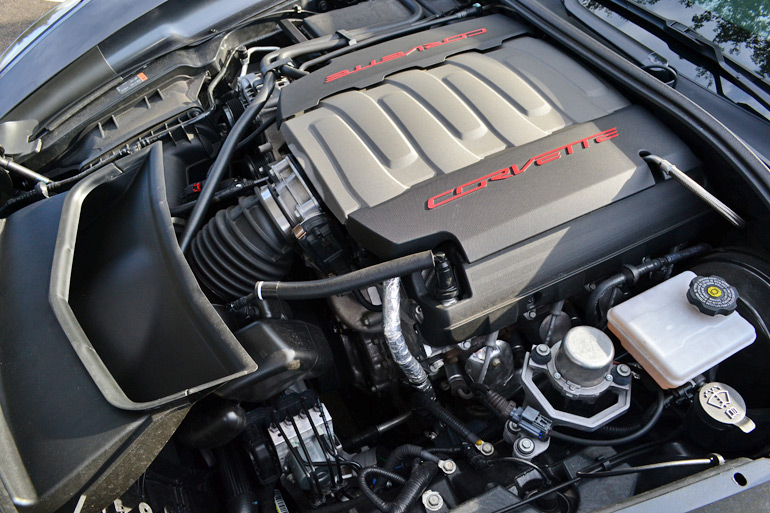 The business end of the new 2014 Corvette Stingray starts with its standard 6.2-liter OHC direct-injection V8 engine producing 455 horsepower and 460 ft-lbs. of torque. In my Z51-equipped Corvette Stingray the power is upped to 460 horsepower and 465 ft-lbs. of torque. Sure, the new V8 engine uses older push-rod technology as for one reason it keeps the height of the engine down for a low-slung hood. Conversely, this masterfully crafted engine is wrapped in modern tech with direct injection, cylinder deactivation (V4 mode), variable valve timing, and enough power and thunderous sound to envelope you with pure excitement that only a top-tier roller-coaster emanate. Throughout the power band the engine is meaty with peak torque kicking in at 4,600 rpm and its muscular 460 horsepower at 6,000 up to its redline at 6,500 rpm. Combined with direct injection and cylinder deactivation, the monstrous V8 and amazing aerodynamics of the composite body panels, carbon fiber hood and roof, all add to the lightweight equation to get 28 mpg on the highway. EPA estimates for city driving come in at 16 mpg. I was able to see 15.6 mpg around town and a steady 27.5 on the highway. Of course those figures dropped drastically when I let loose and had a little fun on some back roads where my 10 mile trip returned 11 mpg. 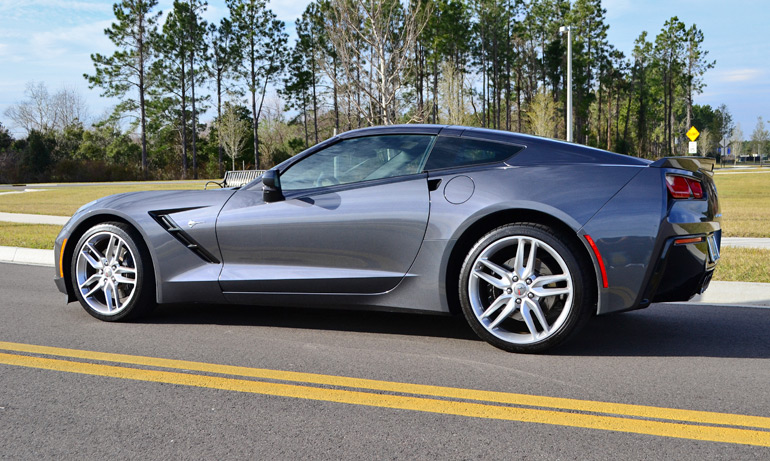 The new 2014 Corvette Stingray is undoubtedly a thrill ride in more ways than one. The driver mode selection is a convenient way of setting the vehicle up for your desired driving preference. The handling of the new Stingray coupled with the optional magnetic ride control adaptive dampers is amazing as well as the soft ride when the driver mode set to Touring, Weather, Eco or Sport. Placing the mode to Track makes the Corvette Stingray even meaner with stiffened dampers, heavy-weighted steering, and performance shifting of the optional 6-speed automatic transmission with steering wheel-mounted paddle shifters. The driver information center cluster 8-inch LCD primarily displays the RPM gauge along with various vehicle information and settings. The fixed speedometer to the left, fix fuel and engine temp gauge to the right, all surround the high-resolution 8-inch screen in the cluster. The gauge setup within the driver information screen is customized according to the driver select mode switch with the option of separating the modes and manually setting up your desired display regardless of the driver mode selection. This is a nice touch to the screen setup giving you the option to manually configure the type of display whether it is the touring, sport or track display theme. An optional color heads-up display, equipped on my test vehicle as part of its 2LT trim package, simulates the sport and track display themes with a digital speedometer, RPM gauge, lateral g-force meter and a multi-stage shift light in track display mode. 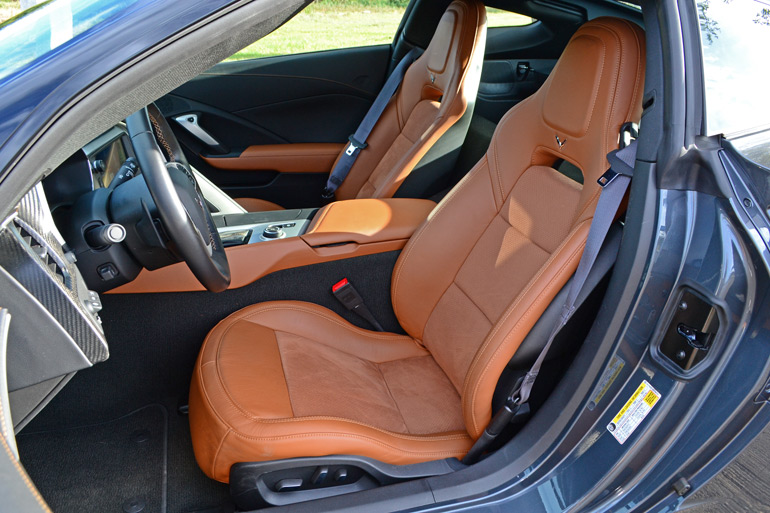 The room in the new Chevrolet Corvette Stingray’s cabin is ideal for two adults just over 6-feet tall. However, moving around in the cabin can be a task as the cockpit-styled cabin limits any lower body adjustments aside from moving the power seats and power steering column. I found my 6 foot 3-inch frame fitting perfectly into the driver’s seat but not with much room to spare considering my knees had about one and a half inch of clearance from the dashboard. Though, I could easily wear a helmet without hitting the roof panel. My other qualm would be the positioning of the trunk release button on the dashboard – I must have accidentally pressed the button with my left knee about 8 times during the course of my week-long driving experience. Fortunately, the trunk release is disabled when driving as are the power-release buttons on the doors when the vehicle is locked to prevent accidental opening while cruising down the road. 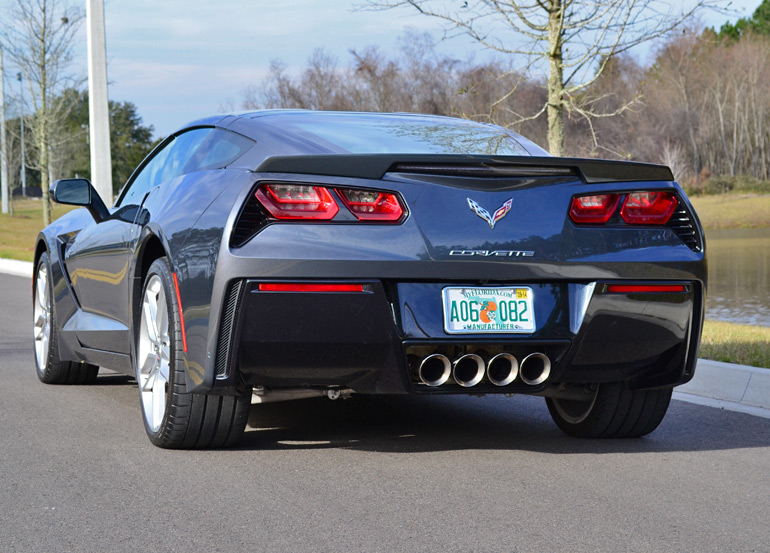 The 6-speed automatic transmission is extremely adaptive according to the drive modes the new Corvette Stingray is placed into. Though, the 6-speed automatic’s torque converter seems to perform a lot of slipping to modulate torque fluctuations before it locks up. This torque converter slipping becomes even more apparent when in manual mode and you step on the gas moderately. It is almost unnerving until you hear the deep droning exhaust note when the rpm raises momentarily. To put things into better perspective with what you will expect from the new Stingray with an automatic transmission, you must focus your attention on its unique drive mode settings. Starting off in Weather or Touring modes the transmission shifts are predictable in a mild manner. Eco mode brings up-shifts on sooner for conserving fuel while the throttle mapping is subdued for a less aggressive profile. In Sport and Track modes the transmission is able to automatically select a performance-shifting mode in the event of aggressive gas pedal action. Using the steering wheel paddle shifters allows you to rev-match downshifts and execute lighting-fast up-shifts in Sport and Track modes. Each full throttle up-shift is followed with a harmonizing and thunderous clatter from the exhaust note and transmission doing its thing in the rear of the Corvette. To make things even more extreme, track mode offers additional competition handling modes when the traction control button is pressed twice. Doing so will enable an extra set of competition track modes: wet, dry, sport 1 & 2 or race mode. Each mode places stability and traction control into a limited state – just to intervene when things get exceedingly dicey. Speaking of being out of control, the new Corvette Stingray’s stability control system is rather progressive in each drive mode where sport and track modes allow the rear wheels to spin for a couple seconds before taking action, which is never too harsh to sap all of your fun or disturb the 50/50 weight balance of the lightweight 3,444 pound Stingray. The use of carbon fiber bits keep things light and are all in the right places, such as the hood and removable targa top. Hardly any stones were left unturned when it came to designing the new Corvette basically consisting of all new parts from the ground up. 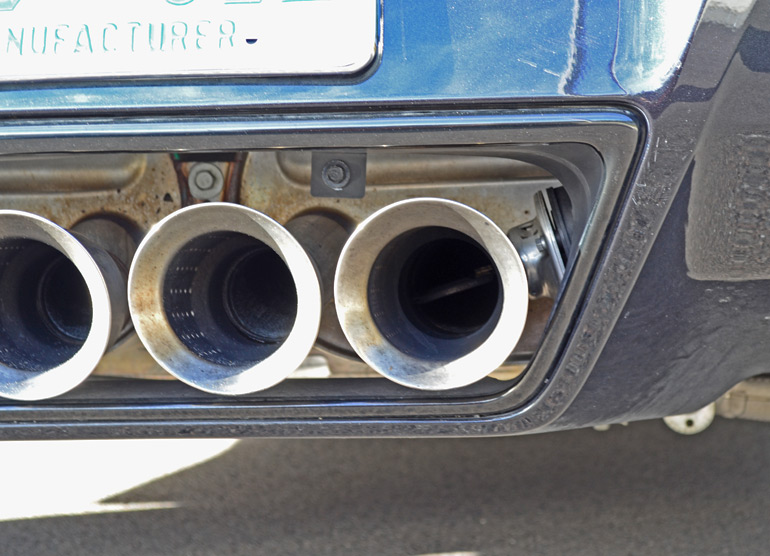 An active sound management is an added benefit for those who don’t want to wake the neighbors when driving through your neighborhood or starting up the LT1 V8 engine. Active sound management controls additional exhaust valves in the rear to quiet things down or open up during full throttle. The drive select modes can control the system automatically or you may manual disable it (open up the valves) and let the roaring sound of the V8 rumble to your hearts delight – just the way I like it. 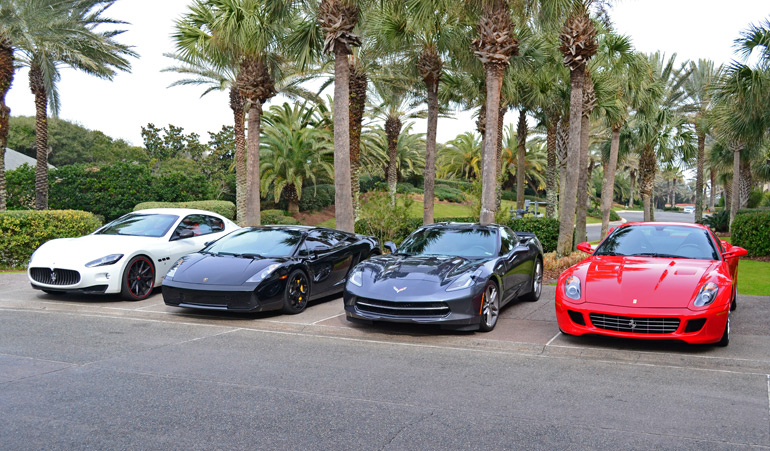 The styling of the all-new 2014 Corvette Stingray harkens back to the 60’s and 70’s Corvette Stingray. As far as the styling, the idea of the Stingray taking cues from other exotic vehicles is a serious debate that will continue to play out for years to come as on-looking enthusiasts see the new Stingray in person. Either way, borrowed design cues or not, the exterior design serves many purposes with a surprising functional aspect to every sculpted and vented line. Some of the surprising functional elements of the new Corvette Stingray start with the front hood vented air intake, to the top-rear vents channeling air to cool the rear-mounted transmission and electronic differential. Even the rear taillight’s vents and diffuser’s side vents have a purpose of venting air to keep the working mechanics cool while adding slight stability without taking away from the progressive downforce. The new square-shaped LED taillights may draw some controversy for the slow adopters but actually have an added visual depth to their close-up brightly lit appearance. The new LED daytime running lamps up front encased in the exotic-styled headlamp housing simulate the outline of Italian exotic vehicles at a reasonable distance, which isn’t a bad thing considering the new Corvette Stingray’s target competition for an unmatched price.

In comparison of my first quick drive of the new 2014 Corvette Stingray Z51 with the 7-speed manual transmission several months ago, the new Corvette Stingray Z51 with an automatic transmission keeps things almost as entertaining without much of a guessing game. The automatic shifts fast enough to rival some dual-clutch transmissions. Additionally, the ease of use factor come into play when you have so much power available over a broad rpm range to lay down on the pavement through the rear wheels. 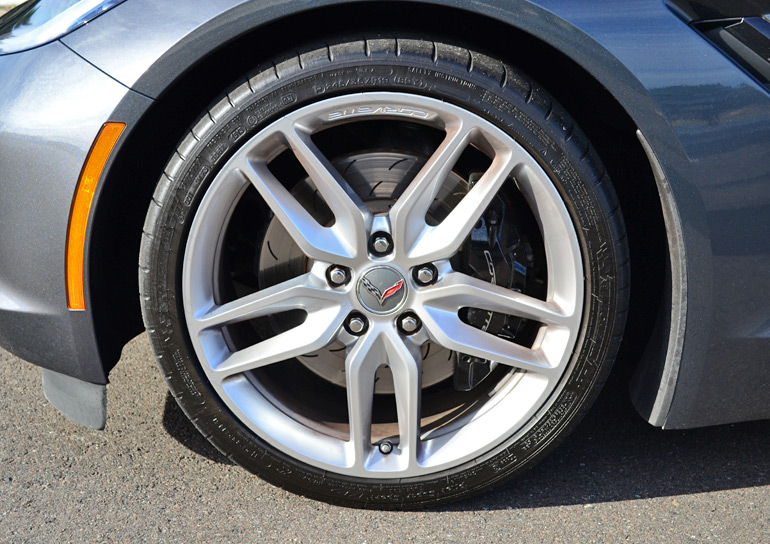 Part of the all-new Corvette Stingray’s iconic statement expands beyond its consistent and respected exotic-car performance statistics. The new Corvette Stingray exhibits the best bang for your dollar being that the same V8 engine and impeccable performance can be had in the base Stingray starting at just $51,000. For that price there isn’t much that can compete, which makes the iconic American sports car shine even brighter when pitted against its competition. No doubt that the all-new 2014 Chevrolet Corvette Stingray is a returned contender with an exceptional value at the best of its game. My 2014 Chevrolet Stingray Z51 test vehicle has an as-tested price of $65,530 including a $995 destination charge.