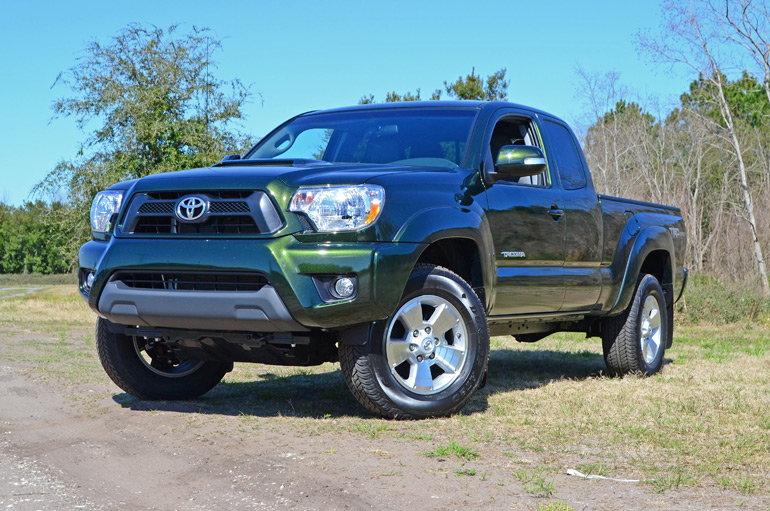 I recently took quick drive in the 2014 Toyota Tacoma Access Cab PreRunner TRD pick-up-truck, and during the whole time behind the wheel I could not help but to think back to the Toyota 4×4 in the movie Back to the Future. Naturally, Back to the Future is one of my favorite movies and I could almost recite the entire dialog from the down-town/clock tower scenes when the 1985 Toyota SR5 4×4 pickup makes its debut on the back of a flatbed truck. I mention this neat little connection because the 2014 Toyota Tacoma Access Cab is not all that different in its design angles being almost 30 years old. Of course, this is not to say that the 2014 Toyota Tacoma is still hanging out in the 1980’s, it is just interesting to see how Toyota’s design language harkens back to the 80’s when the Japanese pick-up truck segment first received some of its literal American traction alongside of the workhorses from the big three American automakers. 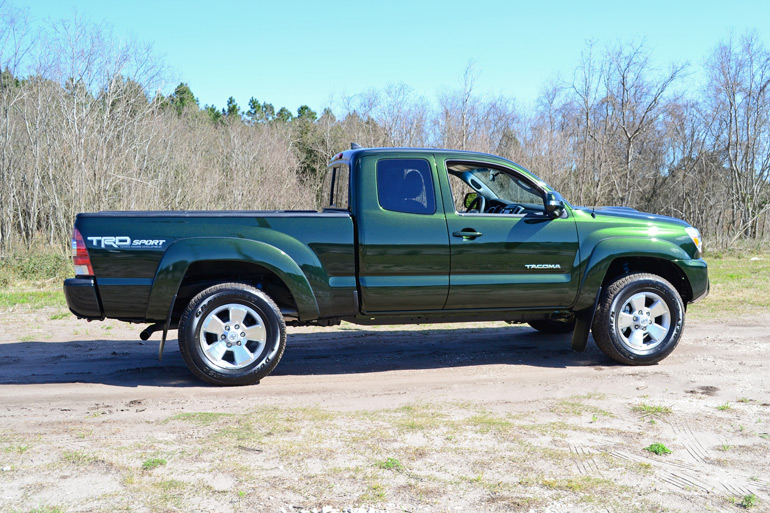 The 2014 Toyota Tacoma PreRunner Access Cab may be a slight rarity among the plentiful Tacoma Double Cab models you see on American roads today. However, my 2014 Tacoma Access Cab test vehicle does somewhat pay homage to the Toyota SR5 4×4 found in the Back to the Future movie from the exterior’s point of view. Moreover, the basic interior proportions do somewhat carry over into today’s model using the simplistic principles of design, which all seem to work well for consumers of the Tacoma and other trucks within this class. Even the dashboard digital clock is something that looks to be from decades ago, but it still works well for the Tacoma. 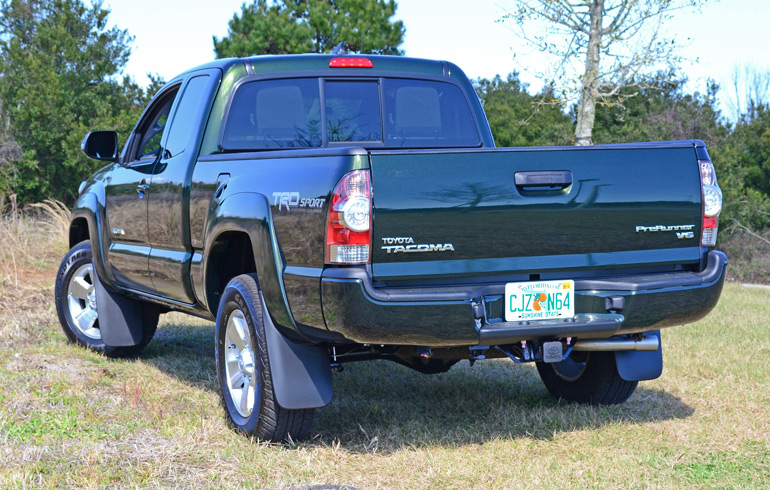 In our full review of the 2014 Toyota Tacoma PreRunner Access Cab TRD, we noted many highlighted and well praised traits of this pick-up truck segment. Even the 4.0-liter V6 powertrain, featuring 236 horsepower and a nice 266 ft-lbs. of torque low-end grunt at 4,000 rpm is enough to suffice for this truck genre. To put the cherry on top, and to bring out that rugged expectation that Marty McFly had when glancing over the rollbars, elevated off-road suspension and KC rally lights of his future Toyota 4×4, the TRD Sport Package on my 2014 Tacoma PreRunner Access Cab included Bilstein gas shocks, 17-inch alloy wheels shod in Dunlop all-season radial tires, foglights, deck-mounted AC power outlet and a rearview backup camera fed through the optional Entune Premium Audio system with Navigation and App Suit 6.1-inch LCD touch-screen interface. 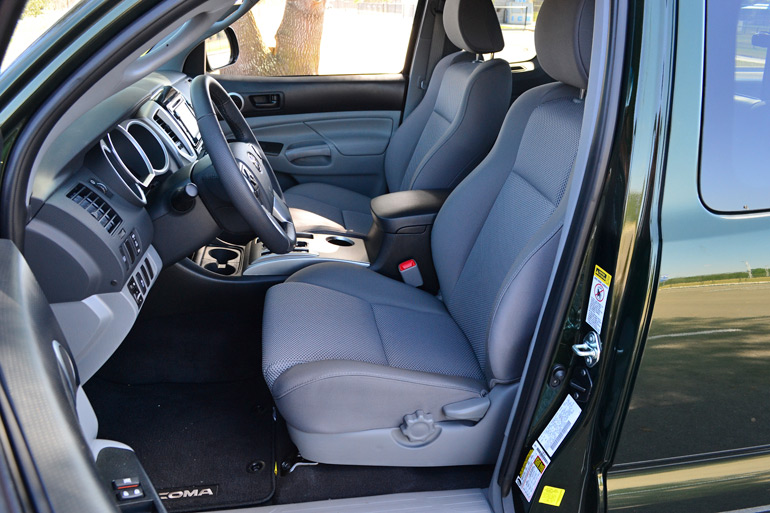 Much of the new 2014 Toyota Tacoma, sans the smallish and uncomfortable double rear jump-seats of the Access Cab, meshes well and is on target for what is expected in a mid-sized pickup truck. For those seeking such a vehicle will want to bypass the Access Cab offering and go for the full Double Cab, which slightly reduces the payload by only 80 pounds but seats a total of 5 comfortably. 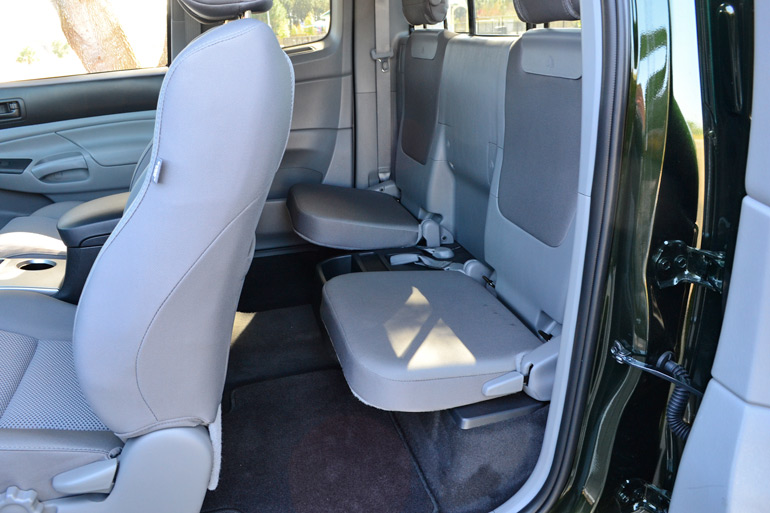 The 2014 Toyota Tacoma proves to retain its willingness to be a leader within the midsize truck segment. Of course on the value and economical side of things the Toyota Tacoma, with is long traditional of durability and reliability, wears its starting price of $18,125 for the regular cab ($20,615 access cab, $22,725 double cab) proudly without worry of competition getting ahead. On the economical side when it comes to fuel consumption, the Tacoma may require a bit of extra attention at the pump where my Access Cab V6 PreRunner (4×2) gets 17 mpg city and 21 mpg highway. Due to the decent on-road ride and high ride-height making it ready for light off-road duty, the Tacoma remains bold in its truck abilities without falling short of every-day road-going qualities. 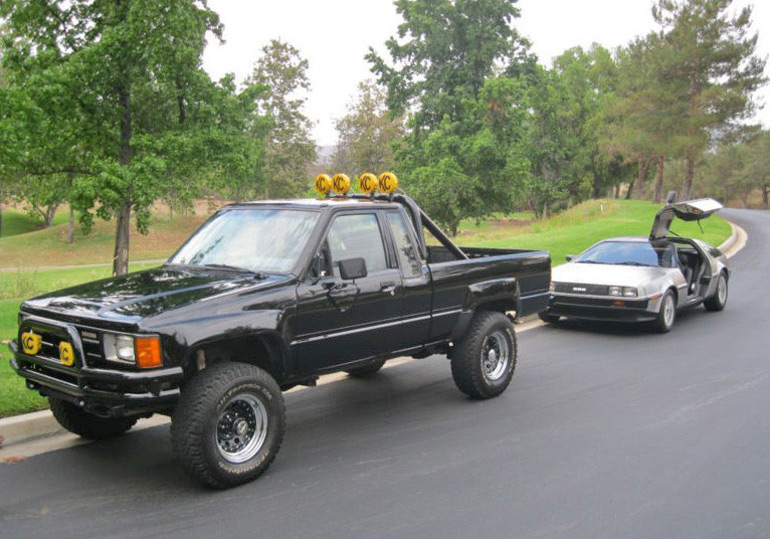 The plug and play aptitude of the new 2014 Toyota Tacoma and its long heritage of durability and reliability, going back to the Marty McFly days of saving the clock tower, are all part of why this truck remains at the top of its game without diminishing those initial qualities of the original formula.