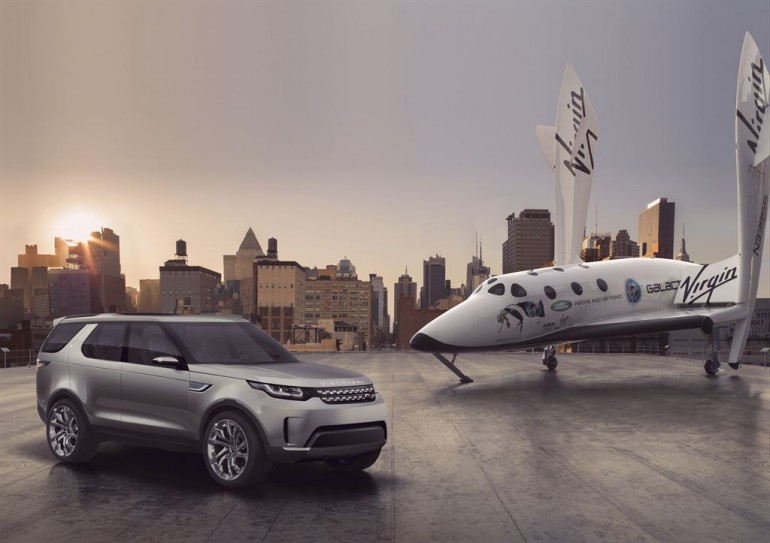 The Discovery Vision Concept was unveiled alongside a scale model of the Virgin Galactic spacecraft at a spectacular event aboard the USS Intrepid – a sea, air and space experience centre – in Manhattan, a day ahead of the opening of the New York Auto Show 2014.

One of the remaining Land Rover vehicles to receive an update to match its siblings is the Discovery. It looks as if Land Rover is playing it smart with the design and saving face with a design similar to the Range Rover and Evoque, which you will see in the new Discovery Concept here. 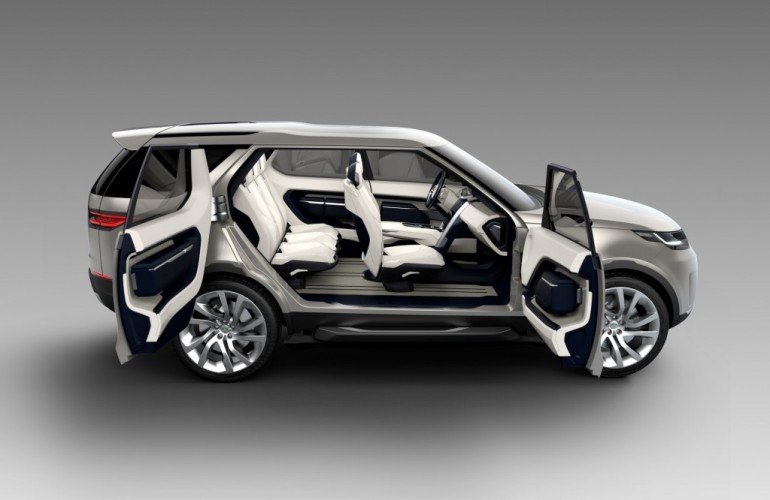 The new Land Rover Discovery Vision Concept is a glance at what is to come with the all-new Discovery sharing that familiar design language in the rest of the Land Rover line of vehicles. Landing at the edge of technology, literally, the Discovery is to feature laser headlights, remote piloting via tablets or smartphones, and smart glass that projects information much like an LCD screen. Talking about futuristic – it is here. 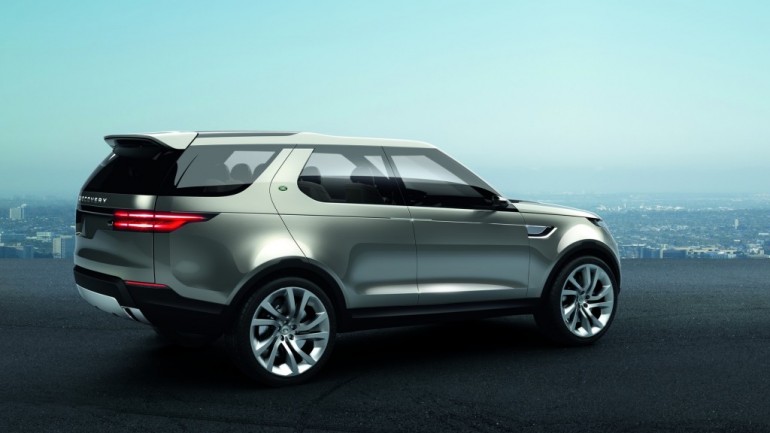 The Land Rover Discovery Vision Concept will be on display later this week at the 2014 New York Auto Show.

Land Rover today revealed its Discovery Vision Concept SUV in New York. It is a vision of Land Rover’s future family of Discovery vehicles, the first model of which is due in 2015. The concept car previews dynamic new design language and an array of innovative versatility and capability features, while also showcasing pioneering technologies from Jaguar Land Rover’s advanced research division.

The Discovery Vision Concept was unveiled alongside a scale model of the Virgin Galactic spacecraft at a spectacular event aboard the USS Intrepid – a sea, air and space experience centre – in Manhattan, a day ahead of the opening of the New York Auto Show 2014.

With the Discovery poised to transition from a single model to a new family of vehicles which will redefine the leisure SUV category, the Discovery Vision Concept offers an exciting preview of Land Rover’s vision for the range, and the modern, premium design language of future models.

“We announced at the Geneva Motor Show in March that the Discovery family is set to evolve. And it is apt that in the 25th anniversary year of the original Discovery that we preview how this evolution will take us forward into a daring new era. The Discovery Vision Concept gives us the first stunning glimpse into this hugely exciting future.”

Designed for the future

The Discovery Vision Concept alludes to its unique lineage with design elements such as the stepped roof and alpine lights. Far greater attention than ever before has been given to creating relevant versatility combined with compelling design. This is a radical and sharply focused approach to embodying Land Rover’s vision of the ultimate leisure SUV.

“The Discovery Concept vehicle represents a Vision of our future family of leisure SUVs. Its modern, relevant and compelling design is a significant shift from Discovery as we know it, while well considered practicality, configurability and Land Rover’s capability seamlessly blend to create a highly desirable vehicle that connects on an emotional level.”

The advanced interior is both spacious and versatile with a whole array of innovative features; this multi-lifestyle versatility is epitomized by highly reconfigurable seating.

By folding the seats flat or sliding them forward or back, via the touchscreen menu, the vehicle can be converted from its standard seven-seat layout to a six-seat, five-seat or even a four-seat ‘limousine’ mode. Detachable, carry-away stroller-style luggage is seamlessly integrated into the vehicle doors, while accessories cleverly integrated into the seatbacks offer high levels of convenience to the passengers seated behind.

A versatile evolution of the Discovery’s tailgate incorporates a powered, single-piece design; in conjunction with a deployable rear sill step and a folding bench seat in the loading area, it creates a flexible event platform with social seating for active lifestyles. On its own, the sill step can also be fitted with a bike/ski rack.

The theme of versatility continues with the materials used in the Discovery Vision Concept interior. The cabin is finished in two innovative types of washable and water- and oil-repellent Foglizzo premium leather that can be cleaned in seconds. Wood veneer on the floors and instrument panel and bespoke accessories lined in Harris Tweed help to create a warm, uniquely British feeling of quality and craftsmanship.

Pushing the boundaries through technology

The Discovery Vision Concept offers a window into the advanced research projects which are underway at Jaguar Land Rover. They illustrate how future Land Rovers could evolve, and the direction of development of technology geared towards the needs of the customers of the future. These include:

Dr Wolfgang Epple, Director of Research and Technology, Jaguar Land Rover, said: “The Discovery Vision Concept demonstrates where Jaguar Land Rover’s pioneering technology and great, modern design could take the SUV in future. It showcases the innovative approach that continues our leadership of the off-road segment. Smarter, more connected, more desirable and more capable – the Land Rovers of tomorrow will be fully and perfectly integrated into everyday life.”

Advanced technologies under development make their debut on the Discovery Vision Concept, taking SUV capability to the next level. Land Rover’s vision of next-generation Terrain Response is a system that can proactively utilise a variety of intelligent HMI and capability technologies, giving the driver the confidence to tackle virtually any terrain with ease.

The innovative Transparent Bonnet head-up display system offers an unimpeded view of the ground immediately ahead, greatly enhancing driver ability and confidence. Cameras fitted below the grille are paired with the Head-Up Display integrated into the windscreen. While traversing challenging terrain, the imagery can be projected onto the windscreen, so that it appears as if the vehicle’s bonnet is, in effect, transparent.

Laser Terrain Scanning utilises infrared lasers emitted from the front fog-lamps to continuously scan the terrain being traversed, and renders a contour map on the high-definition instrument cluster display. This mapping can be paired with the All-Terrain Coach guidance system to chart out a path and assist the driver in navigating it.

Lasers are also used by the next-generation Wade Aid sensory system to measure the depth of water even before the car enters it, and inform the driver of the feasibility of the intended wading manoeuvre.

Altogether, these technologies ensure that the Discovery Vision Concept not only honours Land Rover’s ethos of all-terrain capability, but takes it to a whole new dimension.

Dr Wolfgang Epple, Director of Research and Technology, Jaguar Land Rover, said: “As a true pioneer, Land Rover is committed to constantly pushing the boundaries to redefine what SUV capability and versatility is all about. The Discovery Vision Concept shows the breadth of innovative, intelligent technologies being developed in order to offer our future customers unprecedented capability across any kind of terrain.”