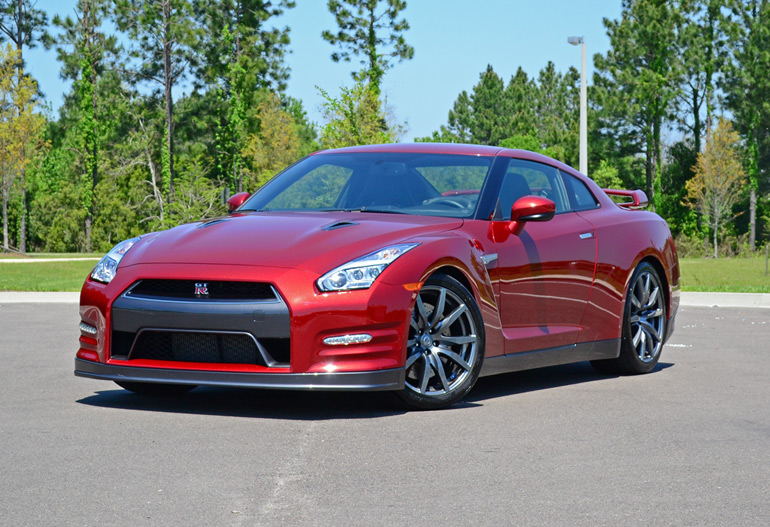 Narcotics, anesthetics, pain-killers, controlled substances, illegal drugs, etc., I won’t admit to doing any illegal or addictive substances in my lifetime, but I can admit to becoming addicted to what the 2015 Nissan GT-R has to offer. Once, I questioned and prematurely judged those who were addicted to certain substances, but now I have a clearer picture as I performed a few 0-60 mph launches in the new Nissan GT-R making the full 60 mph feat in a short 2.7 seconds. 2.7 seconds, the time it takes for you to perform two blinks of an eye or utter the words my passenger uttered in a repetitious fashion, “this is nuts.” Sure, the new GT-R isn’t all about 0-60 time, but since its very first introduction here in the states about 6 years ago, it has been about the performance numbers on paper. After spending a week with the 2015 Nissan GT-R I can still conclude that the complete package is about serious performance, but now it is wrapped up in a subtlety-refined package that is more compliant for everyday drivers. 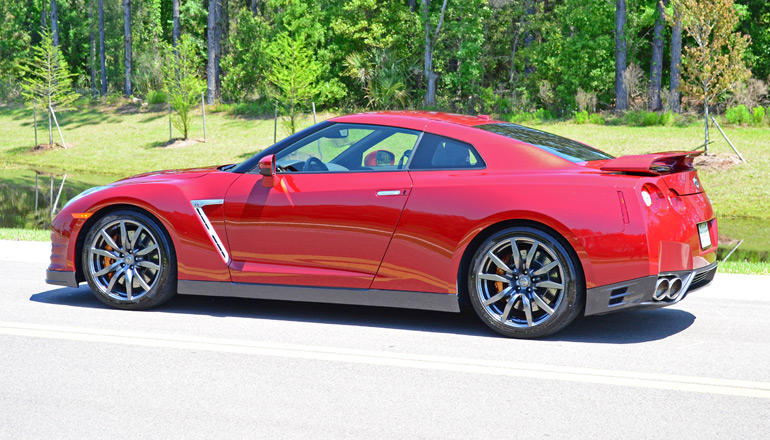 It is possible that there is a significant majority of potential buyers of the GT-R that simply don’t mind dumping a large portion of a paycheck on their transportation, even if it requires stretching a bit each month to fulfill that note. With that said, the 2015 Nissan GT-R can be compared to a drug with many similarities, mostly the good ones. The same 3.8-liter twin-turbo V6 engine mated to a dual-clutch 6-speed automated manual transmission, a solid all-wheel-drive system, and sticky tires, all make the convincing case of addiction. 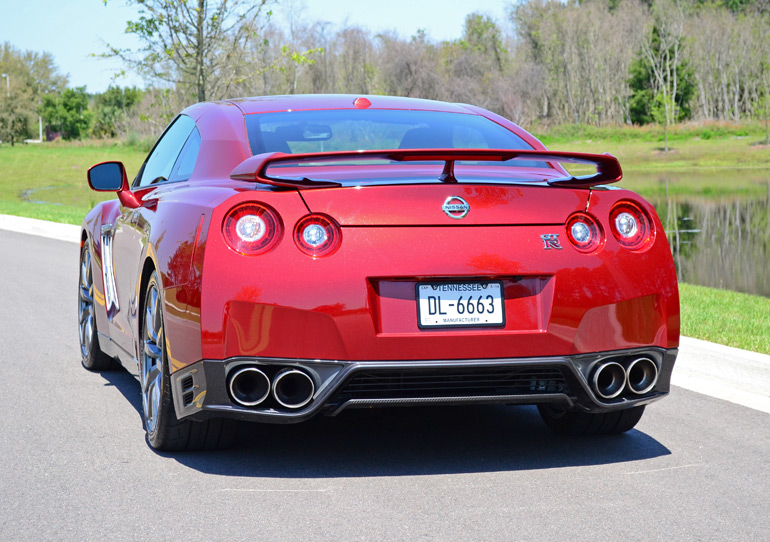 2 years ago I had the opportunity to spend a full day on the track with the Nissan GT-R and walked away reiterating what everyone else said about Godzilla, the name given to the fastest production car to come out of Japan. In a nutshell, I too was convinced that it defied the laws of physics as a vehicle tipping the scale around 3,800 pounds – not exactly lightweight stuff here. The GT-R rips up the track much like a well-tuned shifter-cart would with an overweight driver. At the end of it all, the driver didn’t care about the little weight issue, because his method of transportation was more than capable to feel like it was hooked on rails while bettering his lap time with each revolution around the tarmac. In every-day driving on public roads, the new 2015 GT-R is more of caged Tiger at the zoo, but you have the key to instantly let him loose. At the moment of letting him loose you will instantly fear for authoritative figures putting a leash on the Tiger, potentially leading to an “adventure” of being cadged yourself – among other unlawful peers. 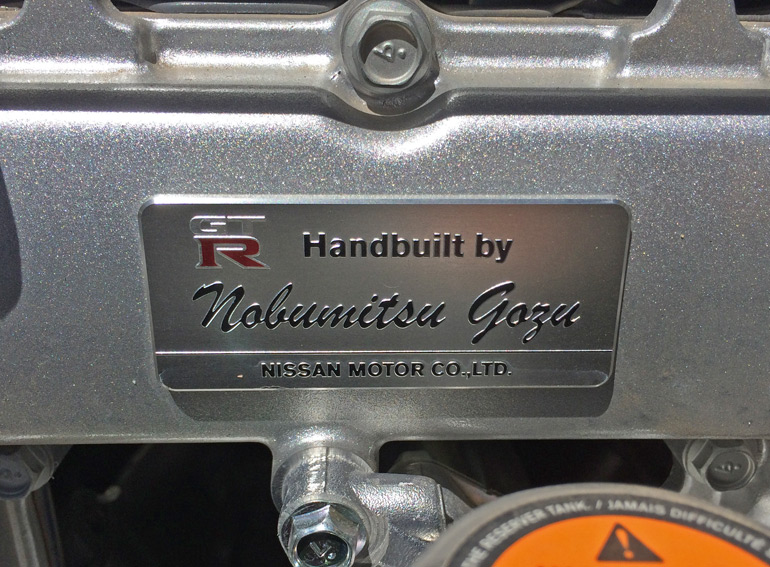 To chart the small changes for the 2015 Nissan GT-R it will take a magnifying glass for some, but for me I immediately took notice to how much quieter the cabin was over the outgoing model years. Additionally, most enthusiasts who follow the deeply implanted footsteps around the Nurburgring  (7 minutes 08.68 seconds GT-R Nismo Edition) for Godzilla, will take note of its verifiable 2.7 second (or better) 0-60 time, new LED headlights in a restyled housing, redesigned taillights with a new halo effect, and each engine’s unique stamping of the lone engineer’s name who built the masterful powerplant under the lightweight aluminum hood. Other changes include minor tweaks to the suspension and adaptive dampers, steering and the addition of interior noise cancelling. In all, it is refreshing to see that Nissan is continuing to refine the GT-R, even though it still remains on a scale slightly below the interior luxury standards of vehicles in its price range. Nevertheless, you can still decipher where the R&D continues to benefit the GT-R, and that is obviously in its marvel drivetrain making it one of the fastest cars on the street money can buy from your local dealership. The GT-R remains to be the attainable supercar for those who have the sufficient means. 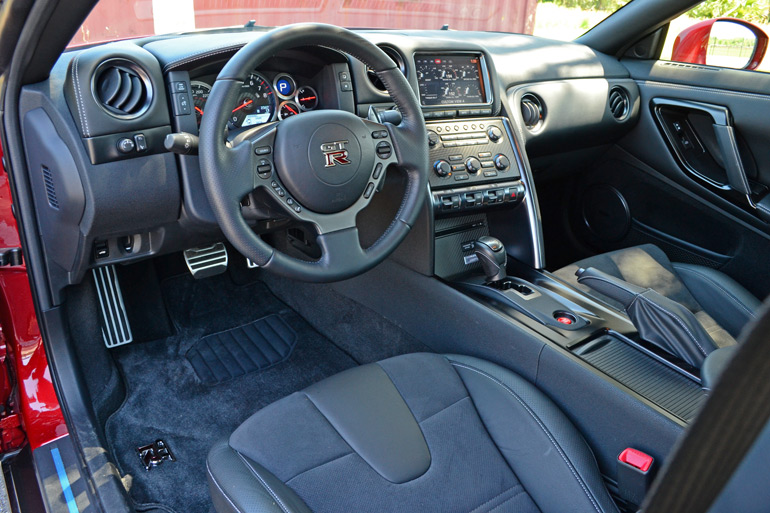 The interior of the 2015 Nissan GT-R is mostly unchanged. With the added sound deadening material and active noise cancelling, the GT-R emits a more subdued character when compared to outgoing models. With three initial trim levels available, Premium, Black Edition and Track Edition, the performance doesn’t vary much until you put the forthcoming Nismo Edition into the equation, which is slated to hit the market later this year packing in 600 horsepower from the re-tuned 3.8-liter twin turbo V6. Other interior aspects are about what you would find in up to par on the Z car with the addition of the PlayStation-inspired (via Polyphony Digital, Inc.) interactive gauge menus setup using the same 7-inch LCD touch-screen for navigation, dual climate control display, audio, Bluetooth phone and audio streaming, and other vehicle settings. Other facets of the interior, such as the stitched leather wrapping part of the dashboard and door trim attempt to add a luxury aesthetic, but are somewhat sold-out by the limited amount of plastics used throughout the cabin. 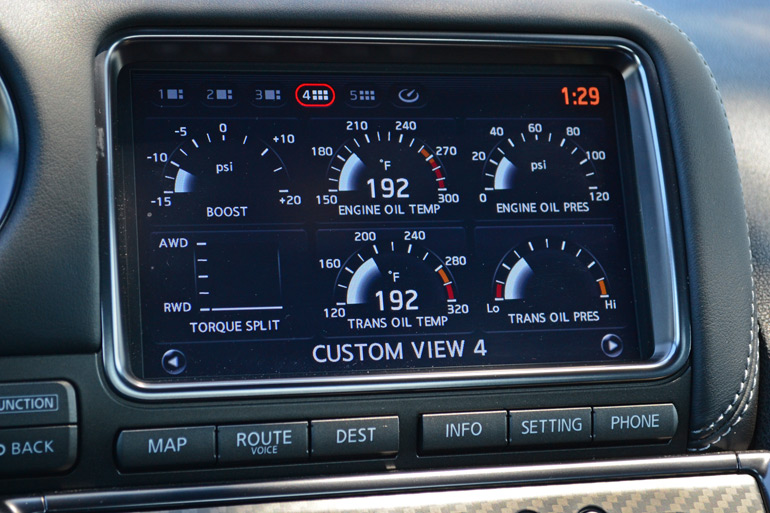 From the small changes over the years leading up to the 2015 Nissan GT-R, performance continues to improve ever so slightly. Output for the twin-turbo 3.8-liter V6 remains at 545 horsepower and 463 ft-lbs of torque, while small changes to the ECU programming yields even better acceleration. Long gone are the old connotations of voided warranties due to a harsh launch mode. Essentially, you can launch the GT-R all day long without consequences by placing the traction control and drivetrain mode settings in R-mode, your left foot firmly planted on the brake while the right foot is planted on gas pedal. At your mercy release of the brake catapults you into a mesmerizing and addictive launch to whatever speed you dare to embark. Mind you, top speed for the Nissan GT-R is 193 mph.

If the forward momentous grip of the GT-R is not enough to amaze you with hardly any wheel spin from the ATTESA E-TS (Advanced Total Traction Engineering System with Electronic Torque Split) all-wheel-drive system, lateral grip for the 3,800 pound Godzilla may just do it for you otherwise. Holding over a 1.0g for lateral grip, the GT-R bites down hard on pavement and race track surfaces. The exclusive nitrogen-filled Dunlop SP Sport Maxx GT 600 tires with a 285/35/ZRF20 patch in the rear and 255/40/ZRF20 fronts have a stiff sidewall and can be a bit noisy at times, which really doesn’t matter in the scope of how well the GT-R performs – there must be some tradeoff here. The rear-mounted 6-speed dual-clutch transmission coupled with the all-wheel-drive system also emits its fair share of noise appearing to be somewhat clunky at times. These clunky sounds are more like music to an enthusiast’s ears, yet picky luxury aficionados may have something to say about the GT-R’s relatively harsh ride and drivetrain noises. To sum it up, the GT-R is bearable driving around town to enthusiasts but for someone jumping out of plush luxury sedan just isn’t going to understand the GT-R until launch commences and they are firmly planted into the well-bolstered front seats with perforated Alcantara inserts. Then, they get it – just like that first time of ingesting some type of addictive substance that gives you a natural high with giggly face. 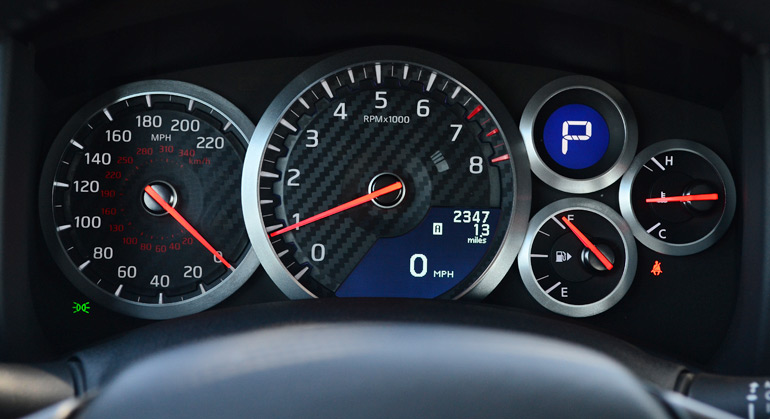 The automatic mode for the dual-clutch transmission is highly adaptive in that it will rev-match downshift when it detects aggressive deceleration, which happens most often in R mode for the drivetrain setting. Using the steering-column-mounted shift paddles requires your utmost attention when you are ready to perform redline shifts. Leaving the drivetrain setting in normal mode (default at startup) will automatically shift a hair shy of redline, even when placed in manual mode. Placing the drivetrain setting into R mode will allow you to burry the rpm needle until fuel cut, bouncing off of the rev limiter if you are inclined to ignore the quickly approaching end of the rpm range. 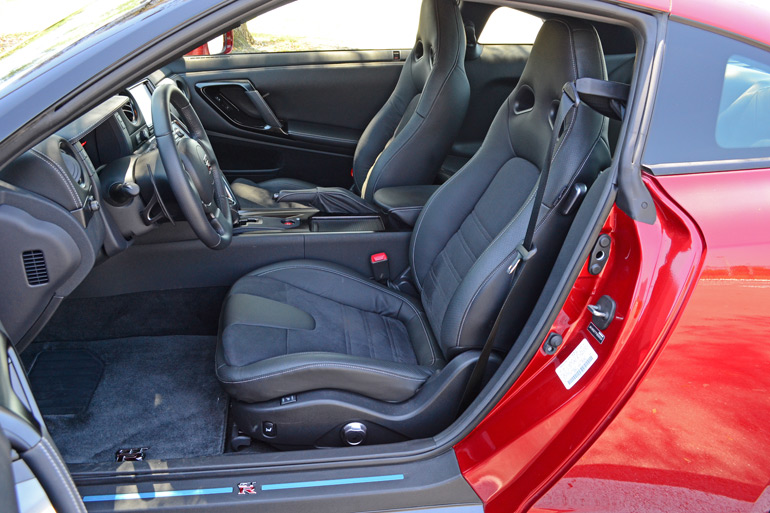 The new 2015 Nissan GT-R, with its softer edges for this year, may be a little easier to live with especially on long hauls. However, it would not be fair to allow those few “soft” attributes diminish the GT-R’s true performance capabilities, which are undeniably of supercar stature. The 2015 GT-R is all about business in the performance arena and due to its slight changes over the years it is more poised than ever to be the ultimate performer that can be had for $100K.

…and this just in: Worlds Fastest Nissan GT-R running 7.81 seconds in the quarter mile at 183mph…