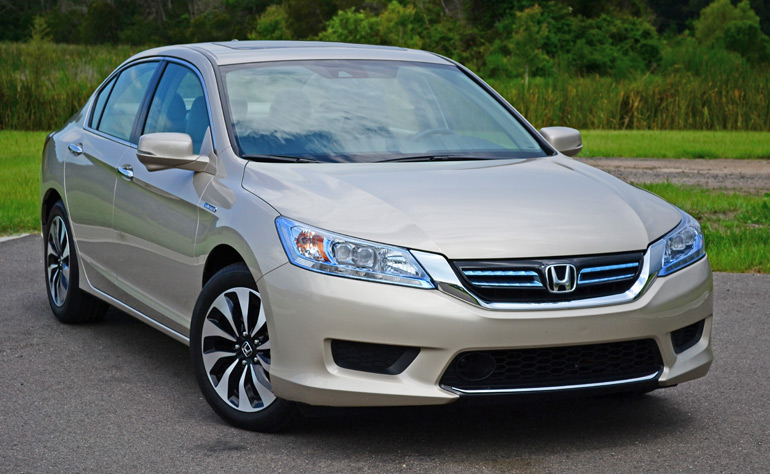 Honda’s approach to hybrid vehicles has been somewhat of an invisible existence among some consumers. The hybrids from the likings of Toyota have taking the spotlight in many aspects leaving Honda as an afterthought. However, vehicles like the all-new Accord Hybrid are starting to gain a new momentum in their recognition, and for good reason.

In the midsized segment for top-selling vehicles, the Honda Accord Hybrid has been somewhat of an underdog. After spending a week with the 2014 Accord Hybrid Touring, it should become a notable competitor in its segment that will eventually stand out among the crowd as it touts its amazing EPA fuel economy ratings of 50 mpg city and 45 mpg highway. 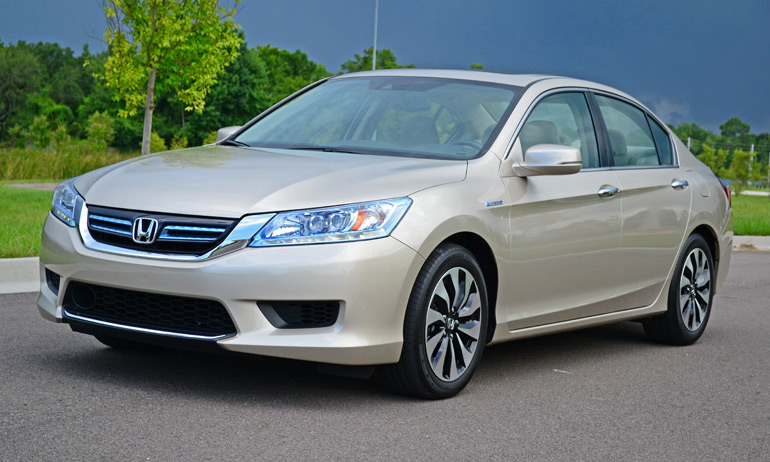 Spending a week with the new 2014 Honda Accord Hybrid Touring, I can walk away with a new-found positive impression on what the Accord Hybrid has to offer and how it stacks up against other hybrid competition.

The 2014 Honda Accord Hybrid comes in three different trims, the base, EX-L and Touring. Much of the equipment matches that of the regular Accord Sedan’s respectful trim level. In my Accord Hybrid Touring-trimmed test vehicle, it proved to have several amenities that you would expect from a mid-sized entry-level luxury sedan. In that, not much was left to be desired apart from having the highlighted features of LED headlights, adaptive cruise control, voice recognition GPS navigation system, driver seat memory function, lane-departure warning, forward collision warning, leather upholstery, heated front seats, upgraded wide-angle rearview camera, HondaLink (integration for Bluetooth-enabled smartphones with an app suite) and a 7-speaker audio system with a touch-screen interface. 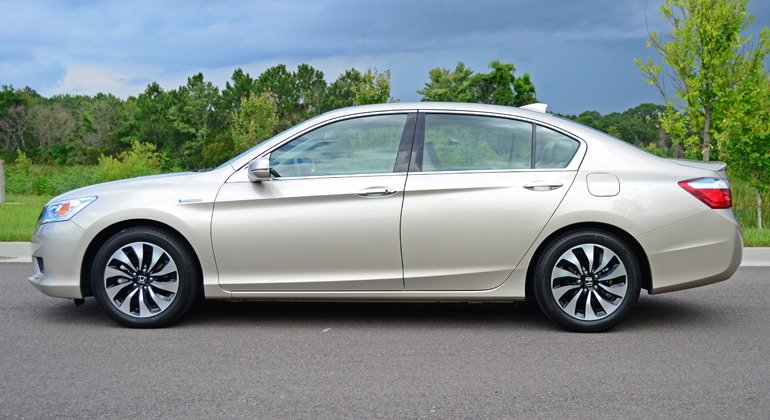 The all-new 2014 Honda Accord Hybrid joins the new Accord generation a year after the initial introduction of the redesigned 2013 Accord Sedan. Powering the new Accord Hybrid is a 2.0-liter 4-cylinder engine and two electric motors, one motor for acceleration and the other acting as a generator for recharging the battery during times like braking (enabling regenerative braking on-the-fly). The total power output from the engine and electric motor comes to 195 horsepower and 226 lb-ft of torque through a  E-CVT, which is technically not a CVT (Continuously Variable Transmission) but a utilization of four gearsets and a clutch to power the front wheels. Together, the system is rather complex and technical but it comes off as working well to sync the gear sets for the electric motor and gas engine acting somewhat like a conventional CVT would. An interesting aspect is the gas engine does not directly power the front wheels until reaching about 40 mph. At that point the clutch system engages to connect the front wheels to the engine propulsion. Under 40 mph the 166-horsepower electric motor is fully responsible for propulsion by means of electric energy generated by the gas engine. 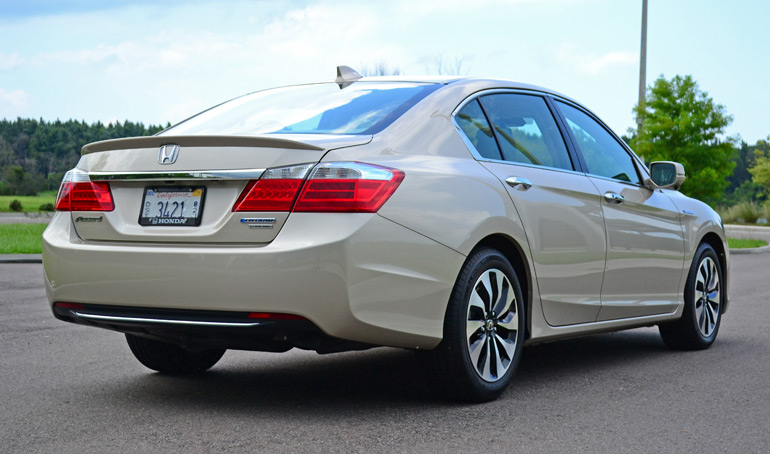 Driving the new Honda Accord Hybrid Touring is a seamless act, basically simulating the drive of a normal Honda Accord Sedan. The system, combined with quick-reacting control units, never really inspire the hybrid experience that may have put a bad taste in the mouths of early adopters many years ago. The Accord Hybrid of today is smooth and it transitions into each mode with virtually no physical indication to the driver except through the dashboard indicators. However, there is one exception to the smooth power delivery of the new Accord Hybrid, when traveling at highway speeds, the system will tend to switch over to full EV (electric vehicle) mode using any energy the battery has stored up. During the transition times when the engine kicks over, it produces a slight stumble that is only slightly noticeable but never really upsets the overall performance of the Accord Hybrid. Aside from this small hiccup, everything else works flawlessly to obtain the stated EPA mpg figures. 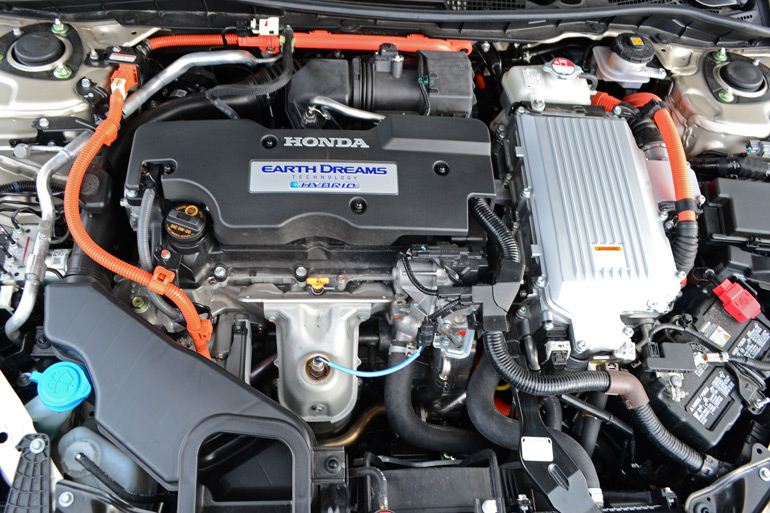 During my time with the Accord Hybrid Touring I was taken away by many surprising aspects of the hybrid drive system. For one, the EV mode is able to take over full operation at any legal speed. I found the EV mode being implemented several times when I was able to follow a vehicle in front of me on mostly level surfaces. The EV mode’s powerful electric motor is capable of keeping the Accord moving and slightly accelerating at highway speeds all on its own without spinning the gas engine. During the times that the 2.0-liter gasoline engine kicks over, it helps propel the front wheels and occasionally charges up the relatively smallish and light 1.3-kWh battery unit. In other cases, the electric motor will add to equation to work in sync with the gas engine to provide its full 195 horsepower sent through the E-CVT transmission. The use of a smaller battery back, saving about 200 pounds and taking up just over 4 cubic feet of trunk space, makes an ideal case for adding efficiency and freeing up cargo space when compared to other conventional hybrid battery setups or the Accord Plug-in Hybrid vehicle. The remarkably advanced hybrid system in the new Accord Hybrid achieves greatness, as I was able to obtain 49.5 mpg around town and even saw numbers as high as 58 mpg over a 15 mile inner-city trip if I actively focused on gas pedal management and occasionally hypermiling. In full EV mode and careful gas pedal usage, the Accord Hybrid could really best its EPA mpg figures consistently. What it comes down to with the Accord Hybrids drivetrain, is some active driver interaction. Completely ignoring what the dashboard reads, you could easily get 39 mpg in any situation, as I did when pushing my Accord Hybrid pretty hard on the highway on occasion. My normal highway consumption came in on an average of 43.1 mpg, and that was obeying the posted speed limits. Another amazing part of the system is the regenerative braking’s smoothness. Basically, the regenerative braking combined with the conventional disc brakes has virtually no transitional period or lumped feeling like you get in other hybrid vehicles. Braking feels the same as in any other gas-powered vehicle. 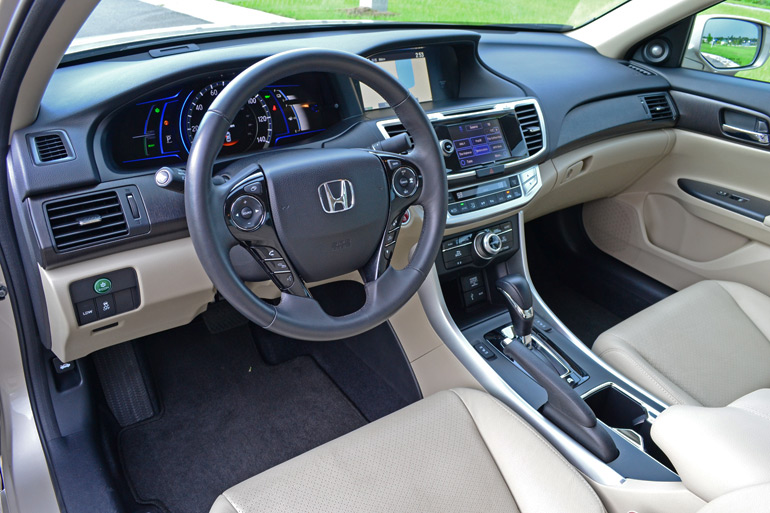 The ride quality and overall performance of the new Honda Accord Hybrid Touring is also another surprising element. Acceleration is strong and the E-CVT, something enthusiasts like myself would otherwise despise with a passion, has to be one of the best, if not THE best, in the automotive market. Actively managing power transitions and switch-overs from the electric motor to the gas engine, the E-CVT transmission combined with the control units all reacted extremely fast. The CVT transmission, allowing the buzzing sound of the 4-cylinder engine to drown your ears in sorrow, reacts quickly to transmit every bit of power it can to the front wheels. Speaking of buzzing and ear distress, the system will let the 4-cylinder engine rev up to high rpms just to satisfy its anticipation of you needing the extra bit of energy it supplies to the battery. Still, evident of the efficiency of the CVT and combined hybrid powertrain system, 0 to 60 mph time comes in at 7.2 seconds. That is slightly faster than the non-hybrid 2.4-liter Accord Sedan. Some of that is attributed to the additional power output of the Accord Hybrid and its nice 226 lb-ft of torque figure, some of which is available instantaneously from the electric motor assisting the gas engine. 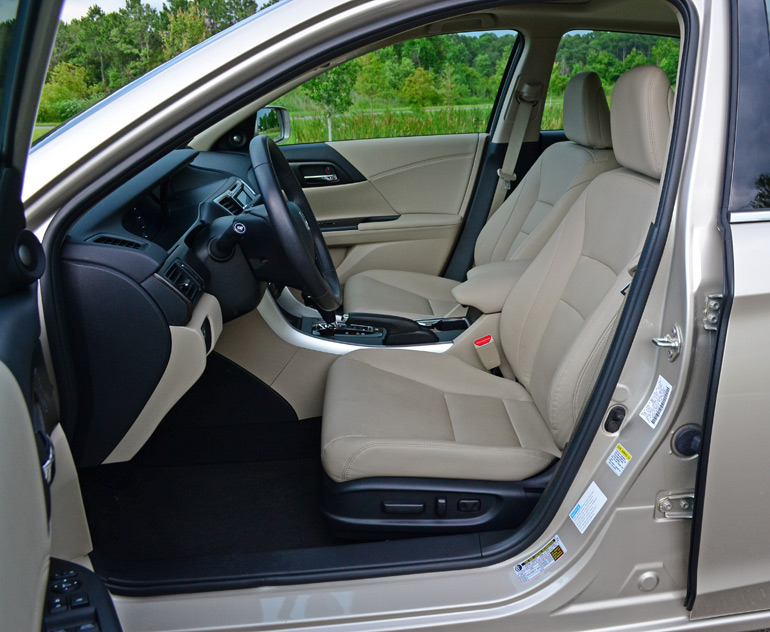 Inside of the all-new 2014 Honda Accord Hybrid Touring is a nicely done interior that has a mixed side of luxury appeal and middle-of-the row perceptions. The Accord Hybrid doesn’t sway away from the normal Accord Sedan apart from the gauge cluster. The gauge cluster and information display does away with the rpm gauge in place of a power and charging diagram. Using the charts of the display hardly ever train you for keeping your throttle in a position to trick the system into staying in EV mode, which I have to give Toyota a tribute on providing such a display to do just that. Though, the Accord Hybrid has a nice way of charting your efficiency levels and actively changes the outlining LED ring color from green to blue as you start to veer off of the “economic” driving scale. The dashboard and its readout works well without taking away too much from the normalcy that is missing from many other hybrid vehicles on the market. 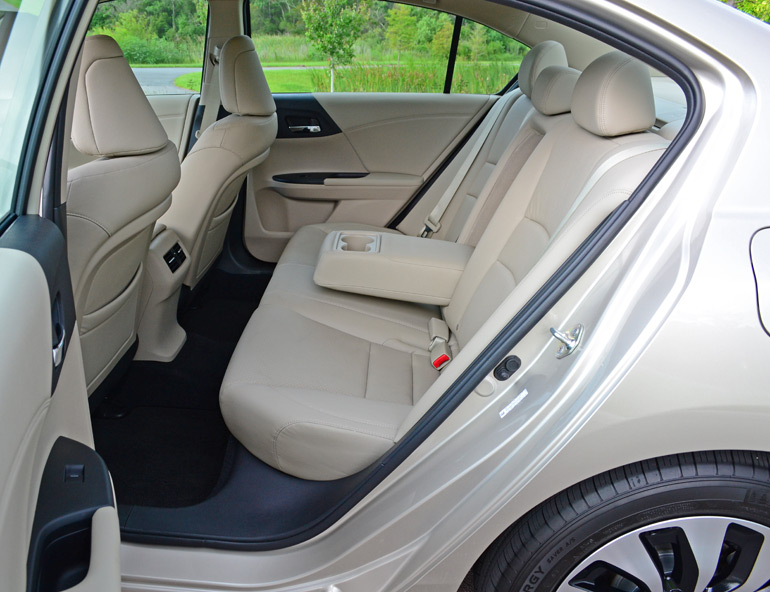 For a long time I have always thought Toyota to be the leader in Hybrid technology and their ability to make the most efficient hybrid. That was all before I had time to experience the new 2014 Honda Accord Hybrid Touring. In all, the Accord Hybrid is a remarkable feat that really excels in being one of the most fuel efficient midsized hybrids on the road today. The pricing of the new 2014 Honda Accord Hybrid is another inspiring part of the equation, where you can have a new Accord Hybrid at a starting price of $29,945. Moving up to the Accord Hybrid Touring trim, adding in several of the before-mentioned highlighted amenities and features, brings the as-tested price to $35,695 including a $790 destination and handling charge. Not bad Honda, not bad!