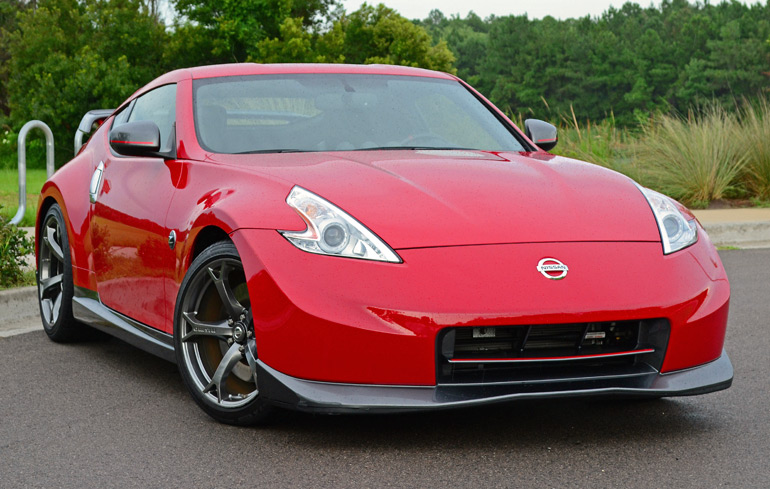 Nissan is making some major strides to bring the NISMO branding to new heights in recognizing its ultimate objective of the enthusiasm found within Nissan Motorsports, all as a higher performance variation of select vehicles. The Z car initialized that new step for NISMO and the latest iteration of the 370Z NISMO before the restyled 2015 model hits showrooms to keep the brand on the right pace for attracting true automotive enthusiasts. 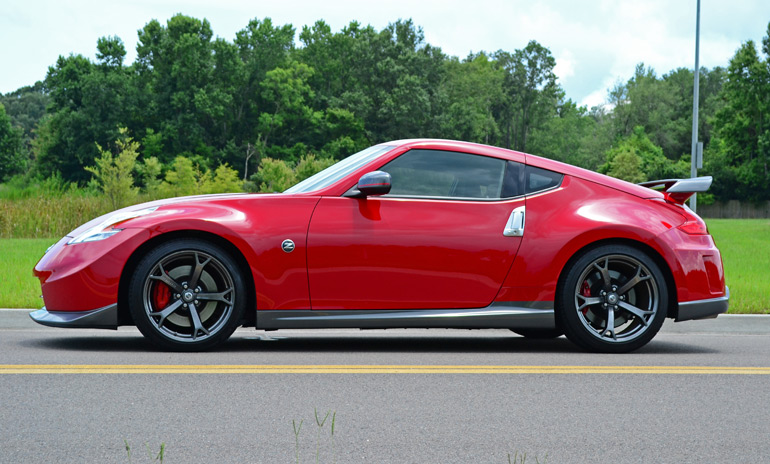 The 2014 Nissan 370Z NISMO keeps on the pace of when the NISMO edition of the 370Z was first introduced in 2009. That formula, only slightly refreshed, keeps enthusiasts at bay and well pleased with the subtle performance improvements of the Z that can’t be found in other normal trims outside of the NISMO branding. The 370Z NISMO retains its retuned 3.7-liter V6 engine with its higher output of 350 horsepower and 276 lb-ft of torque. This power comes on through the drivetrain and its 6-speed manual transmission to the rear wheels in somewhat of a coarse manor, which may be welcomed by some to reinforce its eagerness to rev to redline at 7,500 rpm. The coarseness of 370Z NISMO is retained within the shifter, gas pedal and somewhat through the steering wheel and driver’s seat, which has been a trait from the beginning of its inception. Though, the power is ample enough even with torque found at higher bands to get the 370Z NISMO to 60 in about 5.1 seconds. 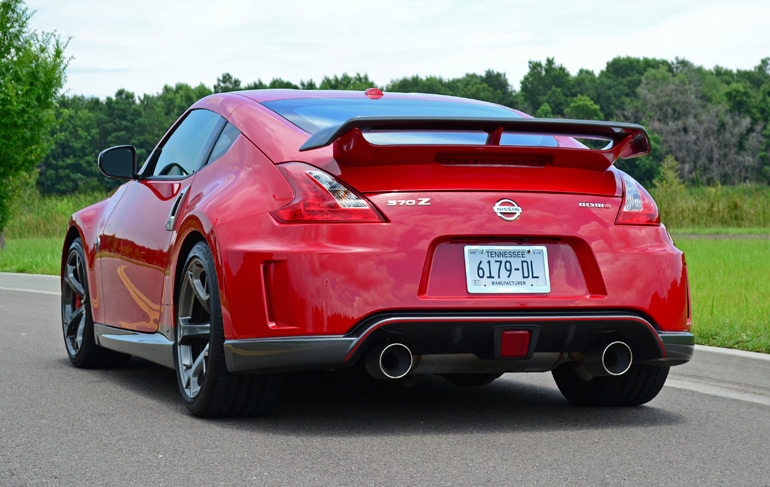 Performance is the 370Z NISMO’s forte and it isn’t shy about being the daring Z car designated for track duties and some spirited road-driving. The suspension, slightly tweaked over the years with NISMO-tuned shocks, is stiff but pays off well to keep the Z balanced through turns and always giving the driver confidence of a well-planted vehicle. The meaty rear 285/35/19 tires wrapping a set of Ray’s Forged wheels really bite down on the pavement to keep the Z moving along right where you point it. The nicely weighted steering and 9 and 3 o’clock positioned Alcantara-appointed areas of the steering wheel are all nice touches to add to the performance character of the 2014 Z NIMSO. Topping things off with the mechanical and somewhat notchy-shifting 6-speed manual transmission with Nissan’s long-touted SynchroRev Match technology (automated matched engine rpm to down-shifts (and up-shifts) depending on gearing selections), attributes to a well-thought package for the two-seater sports car. 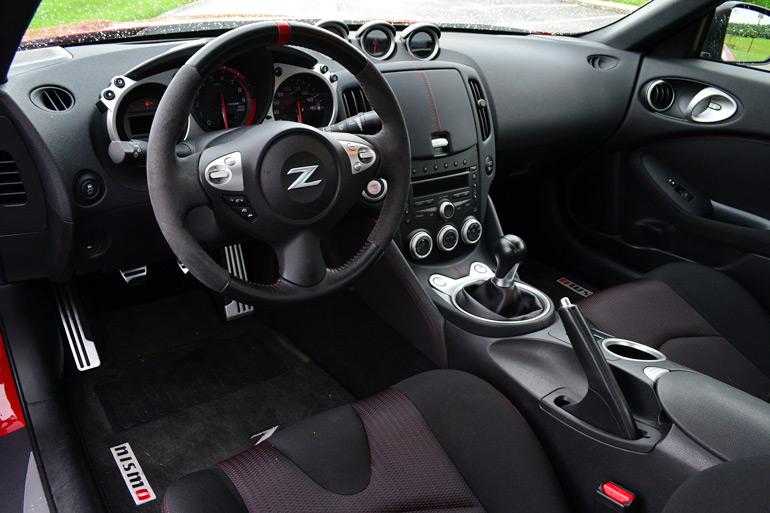 The Z heritage remains well intact for the latest 2014 370Z NISMO where Nissan retains the historic over-all appeal of the 370Z to pay tribute to its predecessors in a nice way. Having driven Senior Editor Chris Brewer’s 1971 Datsun 240Z back-to-back with the 370Z NISMO, it is fascinating to find many of those traits still striving, such as the dashboard outline or slopped-back seating position following the forward-raking roof line, which all carry into the modern representation of the Z. 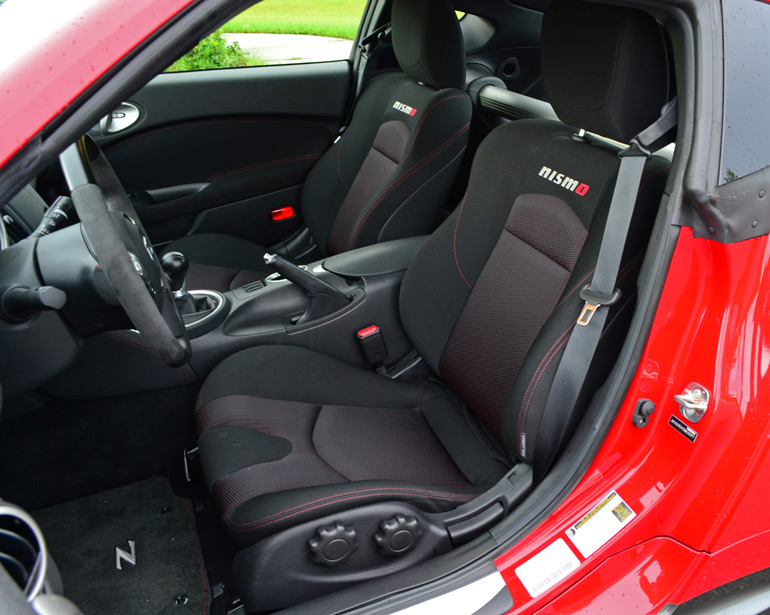 Leading up to the all-new 2015 370Z NISMO, my 2014 370Z NISMO test vehicle reiterates why Nissan decided to keep virtually the same drivetrain, as it is a proven feat within the brand that satisfies the desires of enthusiasts. Not only that, but the 3.7-liter V6 engine uniquely tuned to have 18 more horsepower, 7 ft-lbs of additional torque over the normal 370Z, and the exterior styling to be unmistakable with its aggressive body accents in the front and rear bumpers and topping things off with the large rear spoiler, all make the Z NISMO a one-of-a-kind. 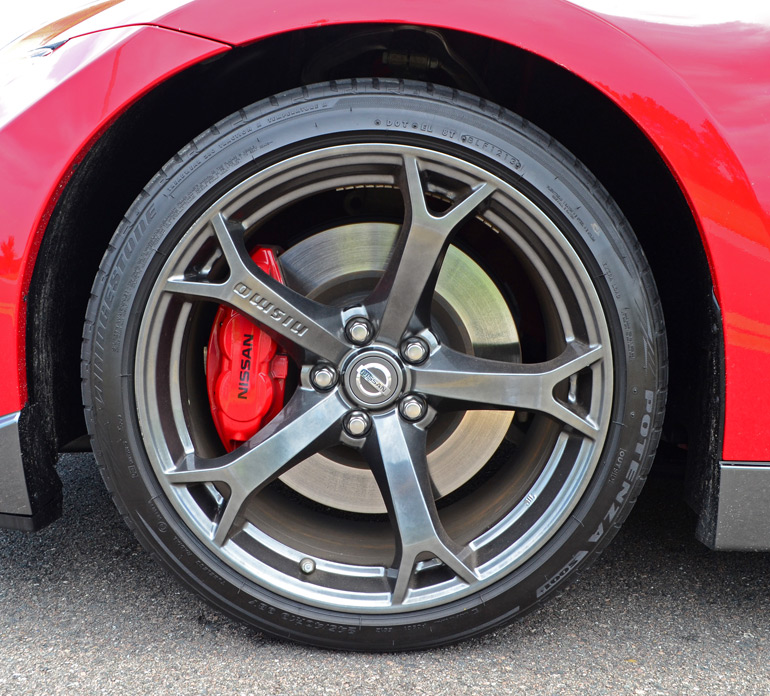 At the full scope of things, the 2014 Nissan 370Z NISMO is not just a done-up Japanese tuner vehicle, instead, it attributes to the engineering of what a performance variation of an already-capable sports coupe is, only restated with its extra dash of sport-styling. The collective parts and variations of the 370Z NISMO that set it apart from a normal 370Z are functional and adds to its minimal performance edge in an eccentric way, even if it is mostly found within the form of its wheels/tires, and slightly higher-output engine by means of a unique NISMO exhaust and engine tuning. 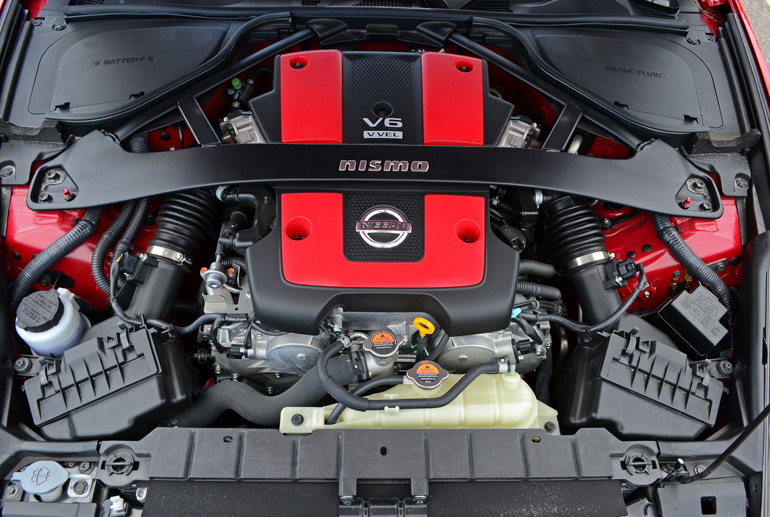 The pricing factor for the 2014 Nissan 370Z NISMO starting at $43,020 doesn’t really come off as a hard sale for enthusiasts who want something to stand out in the crowd. Yet, you would expect a bit more out of the performance arena for such a price. Even still, my 2014 370Z NISMO’s as-tested price landing at $46,370, it still retains a value perception in the likeness of Nissan’s unique one-off Z car being a prized possession that has a bit more in terms of performance than any other Z in the line. Though, missing the delectable luxury options found on other 370Z trims aside from the NISMO variant is the GPS navigation system, heated/cooled power leather seating and an automatic transmission option, may sway some from the basic principles of the raw aspirations of the 370Z NISMO, which feels and sounds more race-car than any other Nissan vehicle in the lineup – except the GT-R in some instances of course. Fundamentally, none of those features are really missed when you are a die-hard automotive enthusiasts and love driving nearly as much as I do. The 370Z NISMO has just enough, even if you do travel or commute – the basic Bose 8-speaker audio system will suffice if the tune of the 3.7-liter V6 engine’s power output and larger NISMO-tuned exhaust does not do it for you.