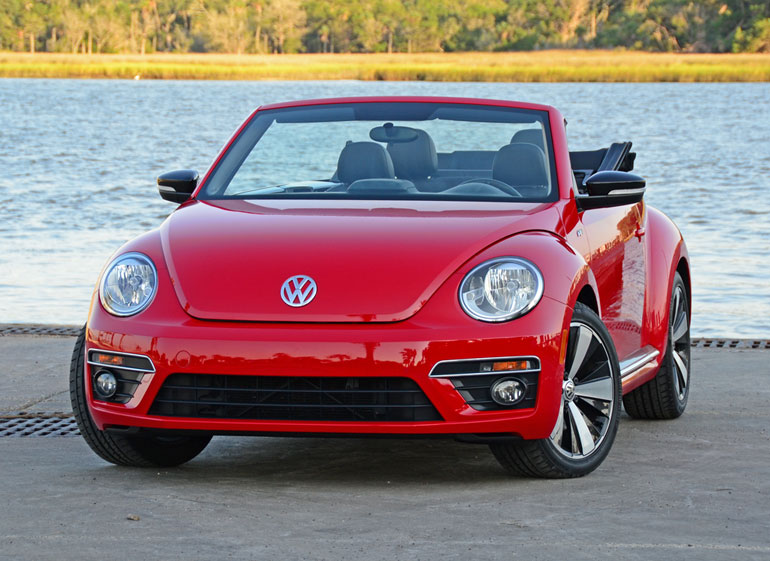 I can remember all of the countless stories from my mother of her enduring the excitement from driving her 1971 Volkswagen Beetle during her time in college. I could quote the story, just like it was explained to me yesterday, where she explained how her beige Beetle had a ragtop and fun-shifting 4-speed manual transmission. It was an intriguing story, but something that I could never really relate to or thought that I would experience for myself. For me, my experience with the Volkswagen Beetle was limited to my friend’s cars and now, my recent week behind the wheel of the 2014 VW Beetle Convertible R-Line. 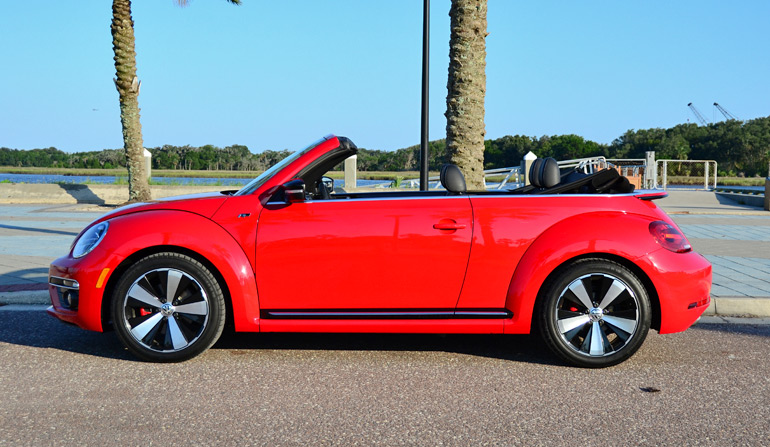 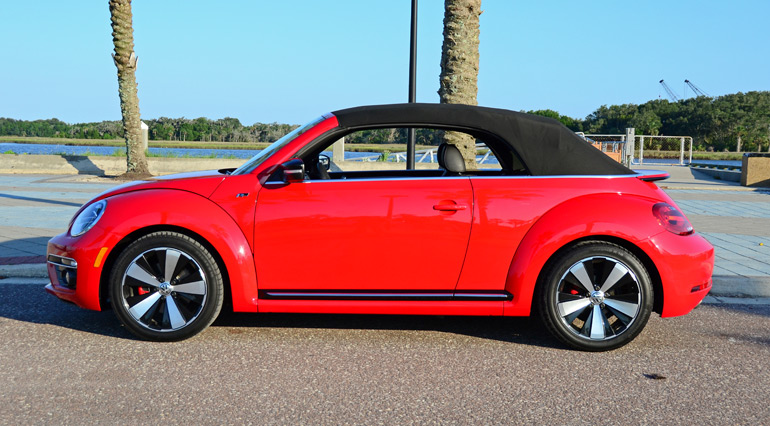 The 2014 Volkswagen Beetle continues its retro styling introduced for the 2013 model year. The 2014 VW Beetle retains that appeal, and with the convertible version the roofline closely mimics the coupe’s slow slung almost chop-top flat look, which is agreeable for most who desire the Beetle’s hipster charm. Testing the 2014 VW Beetle Convertible in the R-Line trim brings some extra excitement to the overall hip package; featuring a 2.0-liter turbocharged 4-cylinder engine producing 210 horsepower at 5,300 rpm and 207 ft-lbs. of torque at a low 1,700 rpm. The turbo 2.0-liter 4-cylinder engine gets 10 additional horsepower over the previous year and gets its R-Line trim signification as to not confuse the 1.8-turbo Beetle (170 horsepower/184 ft-lbs. of torque), which will serve as the base engine choice replacing the 2.5-liter 5-cylinder engine. 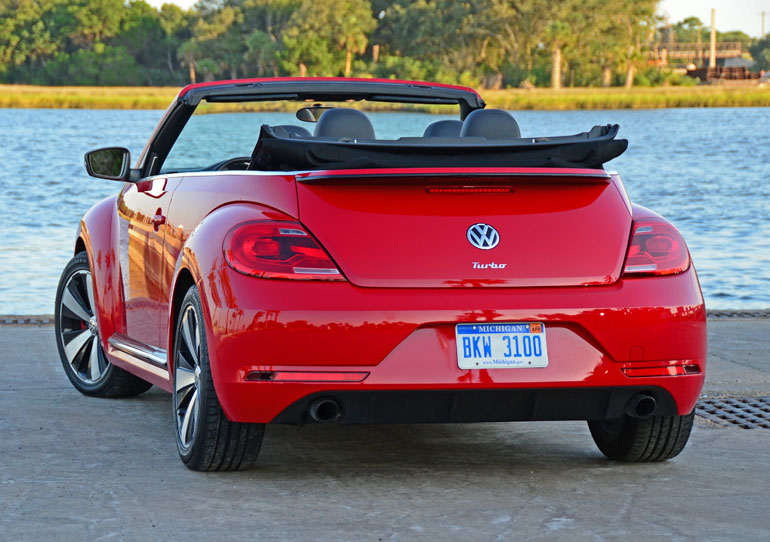 The Volkswagen Beetle is one of the most recognizable vehicles on the road and puts up sales numbers that most manufacturers can only dream of. In the latest iteration of the Beetle, Volkswagen gets the forward momentum moving aggressively, in a literal sense, when it comes to my 2014 VW Beetle Convertible R-Line. As one of the top-level trims just below the GSR 2.0T, the Beetle R-Line takes the place of the outgoing Turbo trim and appeals to enthusiasts, even the light hearted ones. With the nicely tuned 2.0-liter turbo engine mated to an optional automated dual-clutch transmission (DSG), 6-speed manual is standard, my test vehicle is quite the performer. Making a run to 60 mph from a dead stop takes just 6.7 seconds. 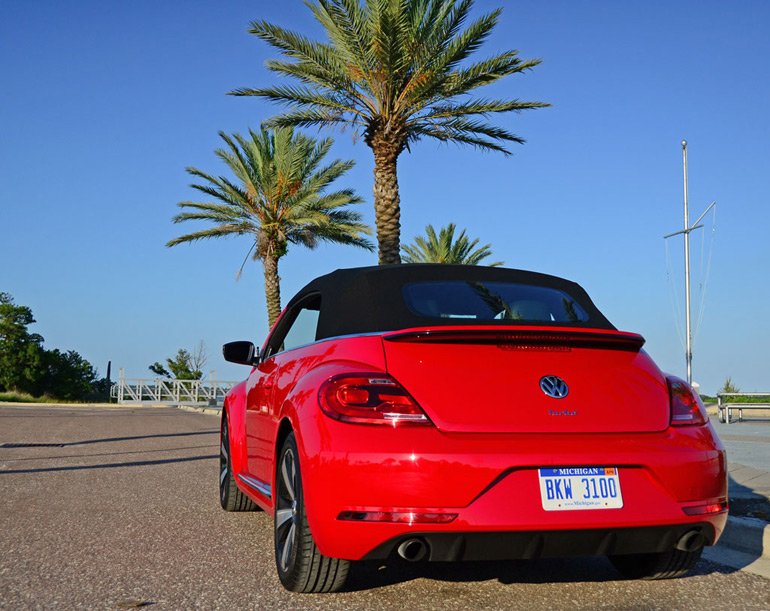 Braking is confident; inspiring and handling traits are attribute to the sportier tuning of its dampers and springs, all part of the exclusive R-Line trim. At times, the handling of the VW Beetle Convertible R-Line starts to get a bit soft when really pushing the drop-top, basically signaling the extra weight carried in the convertible over the coupe. For compliancy, the over-all performance of the Beetle Convertible R-Line is pretty decent.

Ride quality and the eagerness of the stable chassis of the Beetle Convertible R-Line all play into tune of its engineering, something passed on down the German line of Volkswagens that make them appealing autobahn prowlers. The front wheel drive of the Beetle Convertible R-Line, directing a steady stream of power to the pavement through the quick snappy-shifting DSG transmission, are sometimes aggressive and inviting by enthusiasts. The front wheels tend to break loose at times, only gripping after the non-defeatable traction and stability control step in. 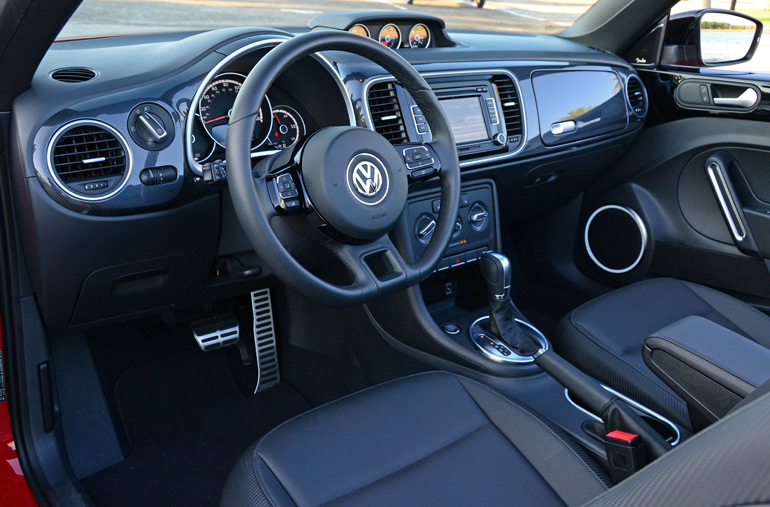 The interior of the 2014 Volkswagen Beetle Convertible R-Line is nicely done, especially considering that VW has chosen to use as many plastics as it does. The over-all look is appealing and much of the simulated carbon fiber trim really does add a nice glossy touch that livens up the cabin. With the top up, sound is nicely isolated, limiting road noises. Top down fun starts with the touch of a button where the all 4 windows roll down and the power-folding soft top quickly opens in just over 9 seconds and closes in 11 seconds, all while the vehicle is traveling up to 31 mph. 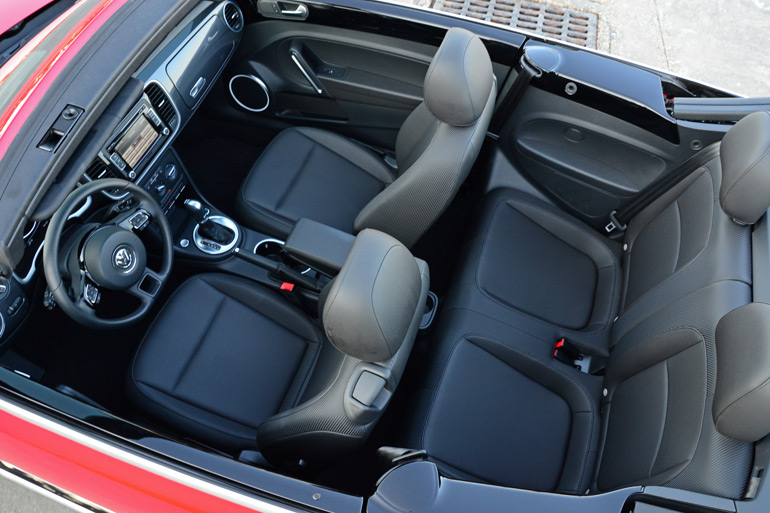 The seating positions in the 2014 VW Beetle are comfortable and provide just enough space out back for two adults. Moreover, the rear cargo capacity in the trunk remains the same with just over 7 cubic feet with the top up or down, a nice way to pack in your items or luggage and still let the top down without any worries. 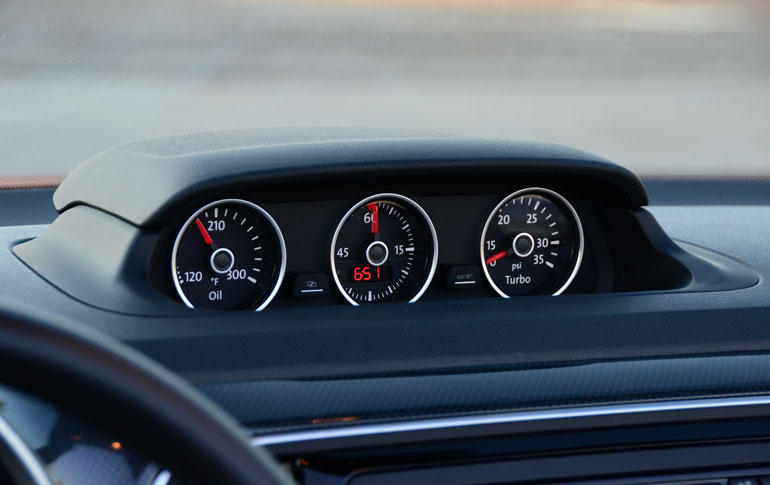 Having the 2014 Volkswagen Beetle Convertible R-Line with the sound system option adds in a nice Fender audio system with a color LCD touch screen as found on my test vehicle. The system includes Bluetooth audio streaming added onto the normal Bluetooth phone connectivity. Volkswagen’s new Car-Net Telematics system is a new addition for the 2014 Beetle, featuring crash notification, roadside assistance, remote door unlocking and a geo-fencing option which will parents to set boundaries for teenaged drivers. Moving up from the base R-Line with Sound are higher-level R-Trim feature sets including a navigation system and an optional backup camera. 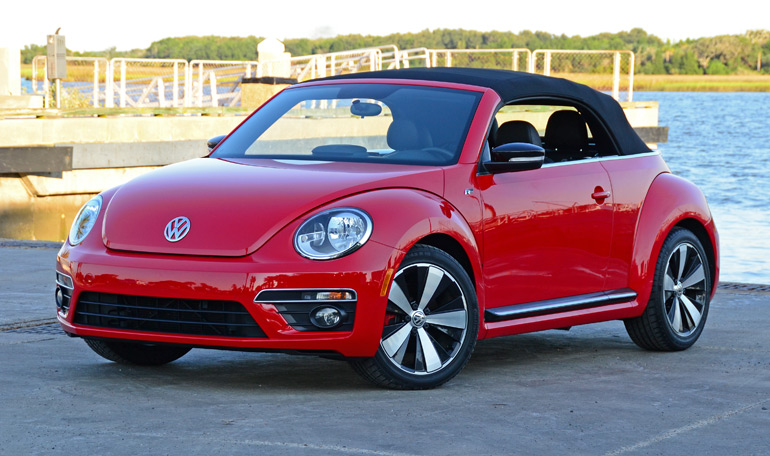 The Beetle Convertible with a turbo engine has never been so sweet.