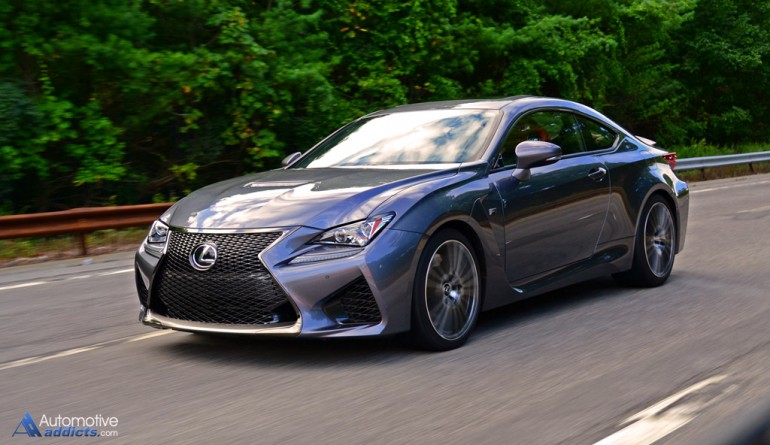 It is always a refreshing situation when a well-thought-out plan comes together. Even better, when the plan is initiated by individuals who are passionate about what they have set out to accomplish and have a unique style to their approach in more ways than one. This, and more, can be said about the all-new 2015 Lexus RC 350 and RC F, Lexus’ new luxury sport coupe and 467-horsepower RC F luxury sports car masterfully crafted by those with an enthusiast culture as the driving force. 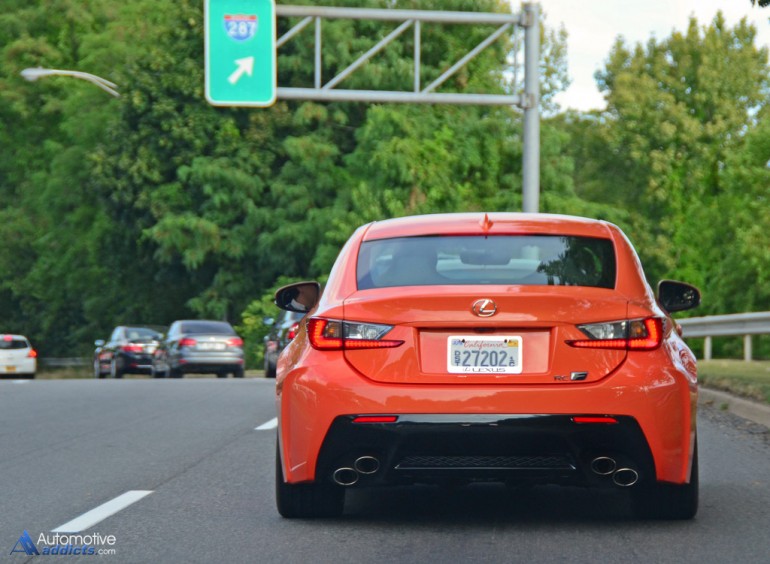 During an invitation from Lexus to fly up to White Plains, NY to experience the all new Lexus RC 350 and RC F, I was taken to a time when the return of the Japanese sports car becomes a reality – a reality that can be grasped without spending 6 figures, yet getting 400-plus horsepower at the rears to play with. The new 2015 Lexus RC embodies that desire for many seeking the return of a Japanese sports car at the upper echelon of the automotive performance and luxury spectrum. The RC and RC F bring exactly that to the table, in addition to a capable vehicle to go up against the likings of its direct luxury sports coupe competition.

For some time many have been yearning to be greeted with the return of, dare I say, Toyota Supra. In a way, the Lexus RC and RC F are a strategic move in that direction with a splash of luxury to make a stand with vehicles like the new BMW 4 Series (M4), Benz C Class Coupe (C63 AMG) and Cadillac ATS Coupe (hopefully soon-to-come ATS-V Coupe). 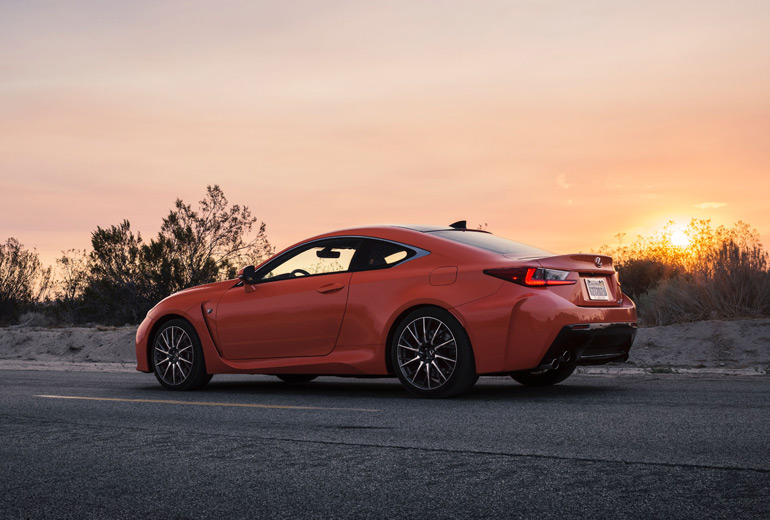 The all-new 2015 Lexus RC 350 and RC F take on a new approach by Lexus grabbing attributes from their current lineup and using them to make the ultimate luxury sports coupe. In the full scope of the new Lexus RC 350 and RC F, components from the current Lexus GS where taken to construct its front end structure and those from an already-reinforced Lexus IS Convertible were used for the midsection while the new IS’ rear makes up the RC’s. Utilizing such components, already proven as an exceptional platform in the current line, make the RC not only unique but quite rigid, adding to its exceptionally reinforced chassis’ stability. In total, the Lexus RC 350 weighs in at 3,748 pounds while the thrashing V8-powered RC F tips the scales at 3,958 pounds, split 55% front and 45% rear. Yes, some may balk at the RC F’s weight, though I wouldn’t jump to any conclusions all so soon.

Powered by Lexus’ proven 3.5-liter V6 engine, the all-new RC 350 is no pushover with its 306 horsepower and 277 lb-ft of torque. The V6 engine is mated to an 8-speed automatic transmission for the rear-wheel-drive RC. Stepping up to the all-wheel-drive RC 350, the V6 engine gets mated to a 6-speed automatic. Driving the rear-wheel-drive RC 350 is much like piloting its not-so-distant IS 350 sibling. Though, the RC has its own personality and the optional rear steer system adds to this toss-ability factor where the new RC tracks in a more predictable manor when making turns or even switching lanes on the highway. 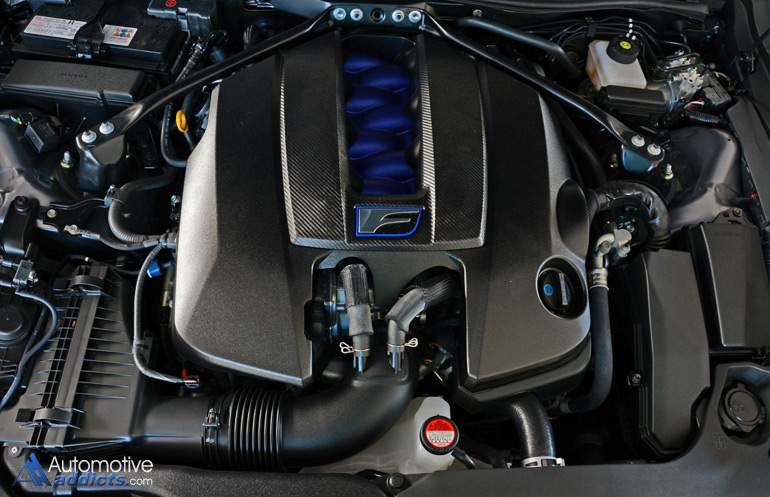 Jumping up to the all-new Lexus RC F, touting a redesigned 5.0-liter V8 engine with a substantial 467 horsepower at 7,100 rpm and 389 lb-ft of torque at 5,600 rpm, things get rather interesting, especially when thrashing it around town on back up-state New York roads and on track at the Monticello Motor Club. Monticello is one of the most remarkable tracks I have been on, featuring over 4 miles of pavement gliding along its hillside elevation changes and spine-tingling sensations when the proper sports car takes on its 18 turns. Speaking of a proper sports car, sans a manual transmission of course, the Lexus RC F is quite the champion. Zero to 60 mph is estimated to come in at 4.4 seconds for the RC F, 5.8 seconds for the RC 350. Top speed of the RC 350 F Sport RWD is limited at 143 mph and for the RC F it is limited to 170 mph with a drag coefficient of 0.33 (Cd). 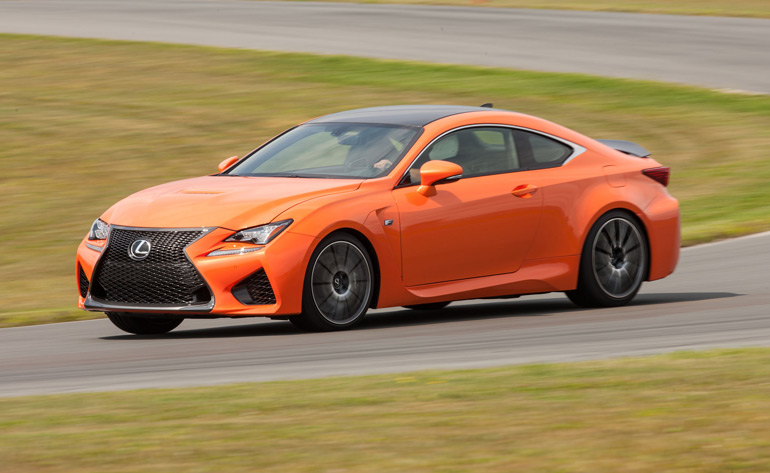 The civility of the new 2015 Lexus RC F dances around its multiple purpose demeanor. On one hand, provided via Lexus’ Drive Mode Select system, normal and eco modes exude the softer side of the RC F (and RC 350) with the adjustable suspension dampers set in a normal mode complying with the computer’s adaptation of reading the road. Moving up to Sport mode, the RC F begins to display an eager Mr. Hyde, remapping the throttle positioning for a more responsive attitude. Going to the Sport+ mode completes the metamorphosis, adjusting the dampers to a stiffer setting and the speed-sensing electric-assist steering becomes weighted with a sporty ratio. 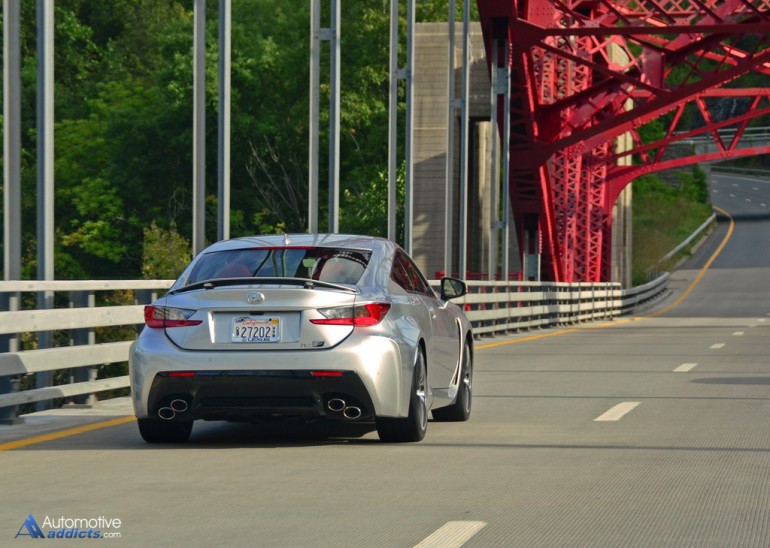 Behavior of the all-new 2015 Lexus RC F in its Sport + drive mode setting is dialed in for track use, as is the RC F – complete with exclusive oil and transmission coolers behind the front bumper’s side air inlets. Banging through each cog on the track of the 8-speed automatic transmission put the driver at a position of full control, allowing you to rev-match each down-shift into redline of the previous gear. This was a nice takeaway of the RC F considering how the outgoing Lexus IS F never really allowed much redline rpm needle burying during its lazy downshifts. The RC F will limit downshifts into 1st gear as to not allow the redline threshold to be reached within a couple-thousand rpms. Basically, don’t expect to downshift into 1st gear unless your 2nd gear rpm is pretty low. This only spoils the fun on those tight low-speed turns. Otherwise, fun is in full submission around the track in the RC F with the Sport + gauge cluster configuration, derived mostly from the LFA supercar’s color LCD readout, is not only colorful but functions well with its flashy schemes leading up to the optimal shift point notification before fuel cut in each gear. Peak power of the RC F surges at 7,100 rpm carrying through to 7,300 rpm, giving you some leeway on each shift. 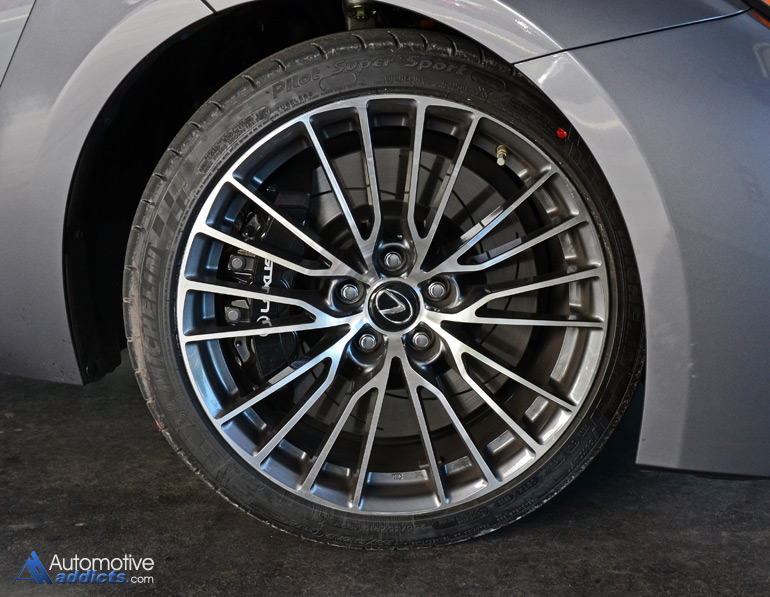 The 275/35/19-inch Michelin Pilot Sport rear tires take on a nice balancing act with the standard Torsen limited slip differential. Front tires are sized at 255/35/19 on the RC F.

Adding another layer of stability is the optional Torque Vectoring Differential on The RC F. This system is one-of-a-kind, distributing torque from wheel to wheel in a seamless fashion through multi-plate clutches. Just know, you really don’t feel the Torque Vectoring Differential working, but something magical takes place coming out of hard turns at full throttle – the RC F just lines itself up where you point it. Moreover, stability control management was noticeably taking a back seat, allowing you to play with that fine line of tire grip through turns. At times you could even push the front to the point of understeer, but line it up just right and the system will let the rear end kick out a tad with some small doses of oversteer. Take my word for it, it just works well and hardly ever spoils the fun to the point of transferring weight to unbalance your turn-ins or power out of turns on the track. 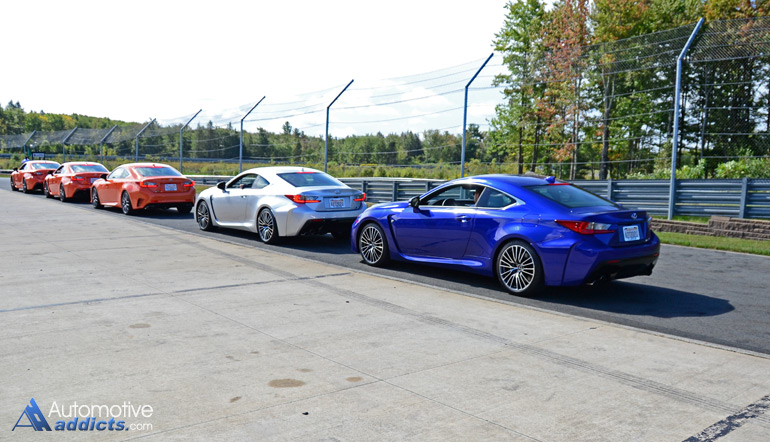 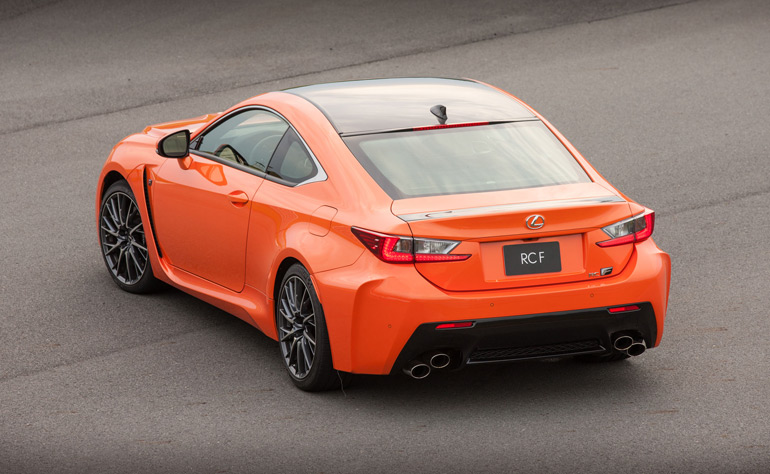 An automated speed-activated rear spoiler raises at 50 mph and retracts at 25 mph to add downforce at speed. There is an optional carbon fiber roof and rear spoiler for the RC F shaving off about 15 pounds thus lowering the center of gravity ever-so-slightly.

Performance of the new 2015 Lexus RC F is spot on for its sporty visual character. Even if the weight of the RC F raises some eyebrows at 3,958 pounds, about 400 pounds more than the new BMW M4 for comparison, the Lexus holds its own for a substantial naturally aspirated V8 engine. There is something to be said about having a beefy V8 engine up front and a cabin to satisfy your luxurious desires. Fuel economy, just like power output, has been improved over the IS F with the RC F getting 16 mpg city, 25 mpg highway and 19 mpg combined. The rear-wheel-drive RC 350 gets 19 mpg city, 28 mpg highway and 22 mpg combined. 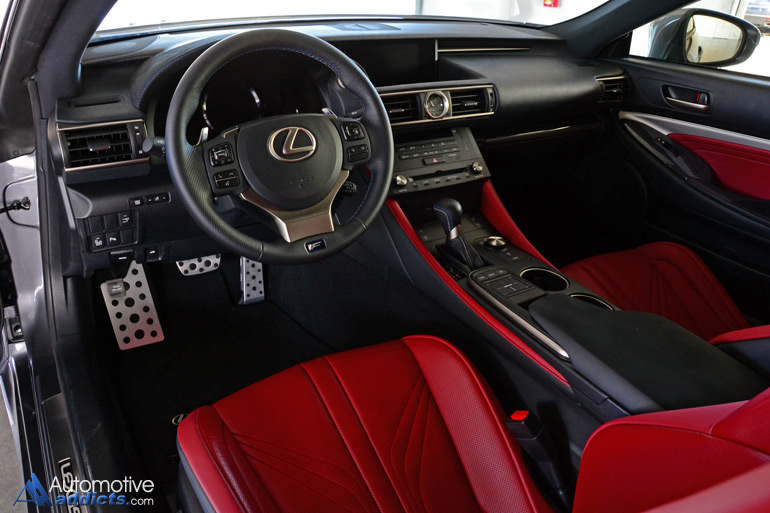 The interior of the Lexus RC 350 and RC F take on the Lexus way where fit and finish is never an issue. The interior of the new RC 350 is nicely appointed with soft touch surfaces and limited hard plastics that mesh well with the overall theme of the cabin. The seats in the RC 350 with the F Sport package are supportive while the exterior of the 350 F Sport gives you a taste of the RC F’s visual appeal with only subtle differences. By putting the F Sport RC 350 on a similar aesthetic track, it really will go a long way in the showroom when the light-hearted enthusiast wants to make do with the 350’s 306-horsepower V6 and save a few dollars in process without giving up the bold styling. Another nice move here Lexus. 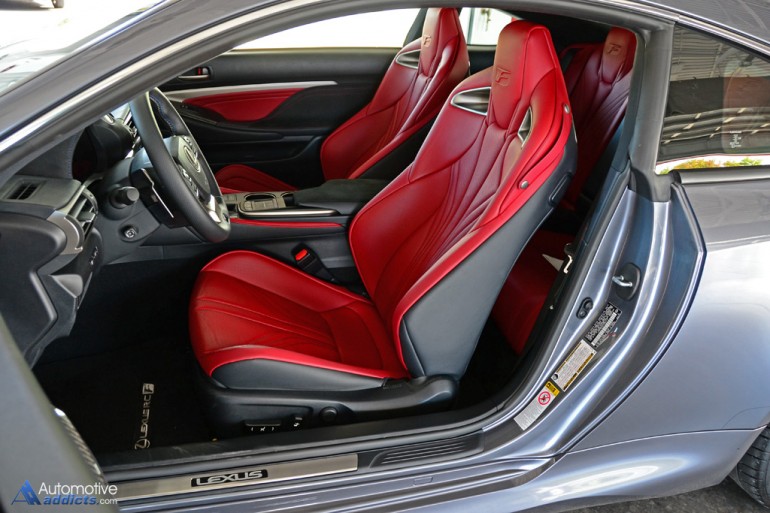 The shortcomings of the new 2015 Lexus RC 350 and RC F can be found in its infotainment system’s Remote Touchpad. For some this system appears to be well accepted like a smartphone, but I found it to be a bit of a nuisance. I could probably use a few days to dig into the controls and configuration of the new trackpad, which can be used to mouse-over virtually all controls of the center high-mounted color LCD screen of the RC and RC F. In a nutshell, you may think of this system as being something that will be updated much like the now-polished iDrive of BMW. I will just give it some time and reserve my conclusion until I have a longer test drive. 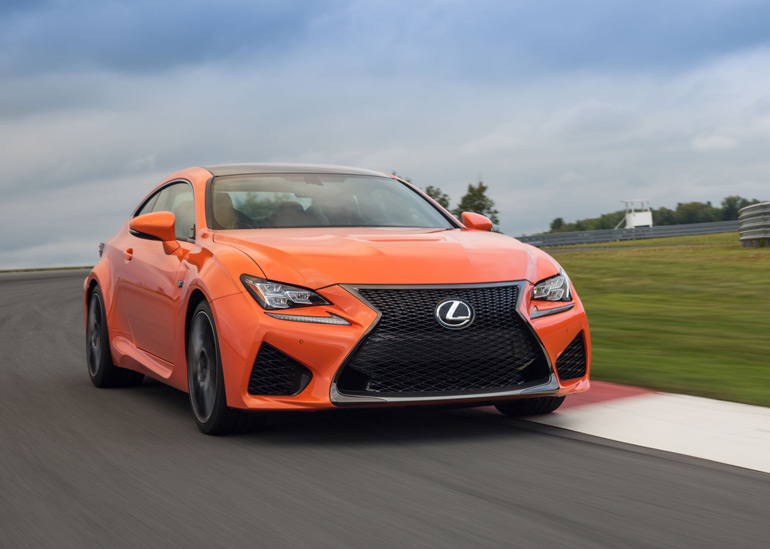 Just like the bold exterior styling of the RC 350 F Sport and RC F, the seats in the RC F take on an extreme pattern, literally. The nicely sculpted and well-bolstered seats with a high back bolster in the RC F are visually appealing and truly functional for keeping your body comfortable and in place during laps around any track or twisty road. The seat ventilation (and heating) is a welcomed feature as taking several laps around a 4-mile course with 18 turns can be a bit taxing and sticky, in several ways. 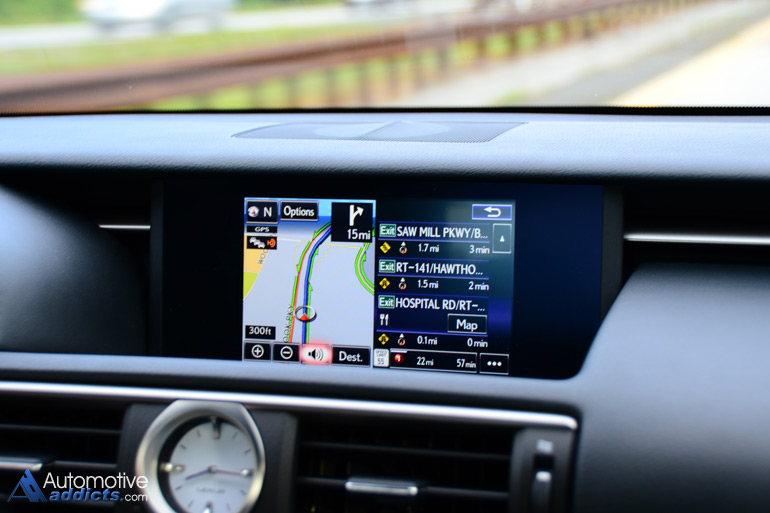 In all, the all-new Lexus RC 350 and RC F build from where the Lexus IS F left off, but never repeats the former’s mistakes. The 8-speed automatic transmission is now proper in its willingness to shift fast on up and downshifts, and the V8 engine is mostly reworked with many internals made up of exotic metals for an amazement of naturally-aspirated power. The styling has pushed the envelope for the Lexus brand, getting more head-turns than it ever has. 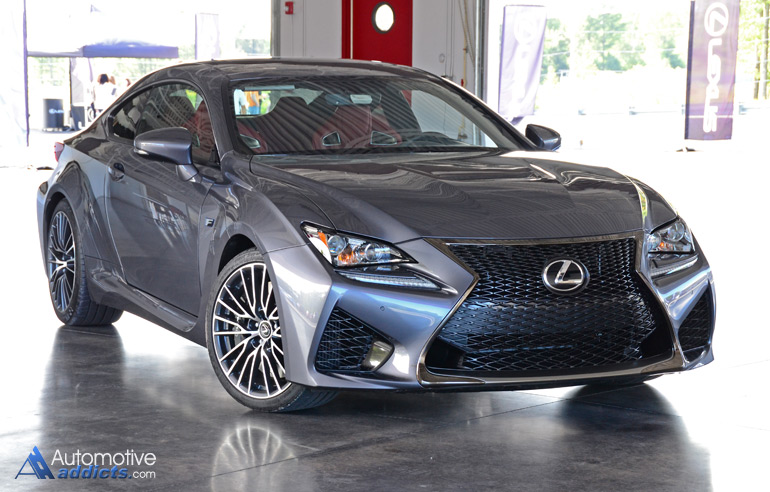