For the gang at Automotive Addicts March means one thing…The Amelia Island Concours d’Elegance. For the weekend of March 13-15, 2015 the Florida’s First Coast will become automotive central, hosting one of the greatest car shows in the world. (Bias alert: I am personally convinced that Amelia is THE greatest car show in the world).

This year the Amelia Concours has chosen to honor an every-mans classic, the oft-overlooked but smile inducing mid-engined Porsche 914.

I remember the first time I saw a 914 in person. I was about 15 years old, living in New England and a neighbor had pulled his 1974 914 Targa 2.0L out of the garage for the first drive of the spring. The sound of the motor through the minimal exhaust was music to my ears. I remember planning to purchase one of my own some day. While I have yet to track down the perfect targa-topped two seater, I have to admit I regularly check Craigslist at least once a week to see if anyone is letting go of one locally.

From our friends at the Amelia Concours d’Elegance: 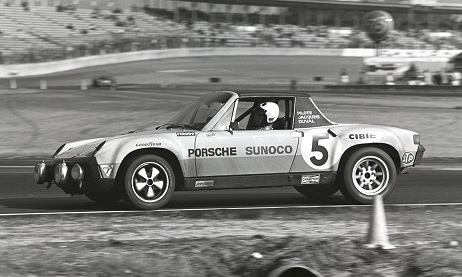 Jacques Duval, Bob Bailey, and George Nichols drove this Porsche 914-6 GT to seventh overall and first in class in the 1971 Daytona 24 hours of endurance. Photo by Bill Warner.

The 20th annual Amelia Island Concours d’Elegance will honor the first mid-engine production Porsche, the 914 in all its variants.

At first some Porsche purists lamented the Porsche 914’s seemingly humble origins. They whispered the “V-Word” . . . Volkswagen. The reality was that the 914 is a blood descendant of the seminal Gmund Porsche, the first car to wear the family name and the crest, a pure sports car designed around a Volkswagen-sourced air-cooled flat-four and a mid-engine configuration.

Porsche had no illusions about the technological and commercial realities of their new sports car. The 914 project began life as a joint venture between Volkswagen and Porsche who needed an entry level replacement for the four-cylinder 912. With the economies of scale brought by a production liaison with Volkswagen, the 914 could be commercially viable.

The prototype 914 appeared early in 1968 just as Porsche was poised to shed its reputation as a giant killer on the world’s race tracks. The man heading the 914 project was Porsche R&D chief Ferdinand Piech, Ferdinand Porsche’s grandson who created, almost simultaneously with the 914 project, the all-conquering Porsche 917 Le Mans endurance racer.

The lower price of the 914 brought a new clientele to Porsche showrooms. The 914 quickly outsold its pricier 911 stablemate while staying true to Porsche’s technological heritage with friendly Porsche dynamics, solid handling and, in the case of the 914/6, traditionally ferocious Porsche brakes.

“It was fashionable with some self-proclaimed Porsche purists to consider the 914 an ‘ugly duckling’,” said Bill Warner, Founder and Chairman of the Amelia Island Concours d’Elegance. “That changed very quickly. Here in north Florida the Porsche 914 found a home and willing customers through the racing exploits of Peter Gregg, Hurley Haywood and Brumos Porsche who took the 914/6 GT to victory in the first IMSA GT race in history on the way to winning the first IMSA GT Championship title in 1971.” 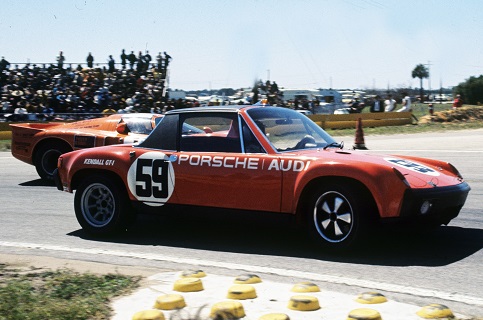 The 914/6 fell quickly and easily into the traditional Porsche role of “giant killer” winning half the races on IMSA’s 1971 IMSA GT championship calendar against much larger and more powerful Corvettes, Camaros and Mustangs.

“The 914/6 GT was my first real race car,” said Hurley Haywood, five-time winner of the 24 Hours of Daytona. “Peter Gregg and I shared the Championship in 1971 in my first year of professional racing. The 914 was really fun to drive and we would kill the big block Chevys and Fords in IMSA. We still have that car in our collection and use it often to give rides to our Porsche driving school customers.”

At Le Mans the two-liter 914/6 GT not only won the 24 Hour classic’s GT class in its 1970 debut, it finished sixth overall; the first GT car behind the pure prototypes that had more than twice the 914’s engine displacement and power. To the quiet dismay of the self-appointed purists the class-winning 914/6 GT finished three laps ahead of the top placed 911.

The 914 in all its iterations enjoyed a long and productive life as a club racer in America. When Porsche built the 916 in 1972, the six-cylinder version of the 914 packed a 190 hp 2.3 liter six and wore big fenders and more aggressive Porsche styling details. But the 916 was deemed too expensive for serial production. Just eleven had been built when 914 production ceased in 1976.

The ultimate 914 was the 914/8 powered by a three-liter flat-eight Porsche racing engine. Just two were created for the Porsche family.

“The 914 is a true Porsche with pure Porsche DNA,” said Warner. “The 914 was raced and rallied successfully all around the world and, like the 911, a cult has grown up around it. It’s time the 914 had its day in the sun.” 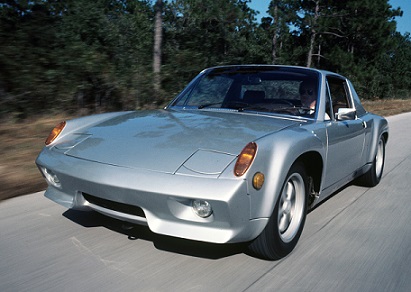 Ex-Peter Gregg 1972 Porsche 916, one of only 11 ever manufactured, is now owned by George Hussey of Atlanta. This period shot is of Gregg driving the car for a photo shoot for Road & Track magazine. Photo by Bill Warner.