The Automotive Addicts team has a strong tie to the Amelia Concours d’Elegance. Not only is it the most important yearly automotive event that takes place in North Florida, but Automotive Addicts is fortunate enough to work with the Amelia team to put together the Cars & Coffee at the Concours presented by Heacock Classic Car Insurance event that takes place on Saturday, March 14, 2015.

Today, during a brief visit to the Amelia Concours offices in Jacksonville, Florida, we were able to speak with president Bill Warner about the upcoming show and congratulate him on winning the prestigious Road Racing Drivers Club 2014 Bob Akin Award that he received last night at a dinner preceding the 53rd Rolex 24 at Daytona. 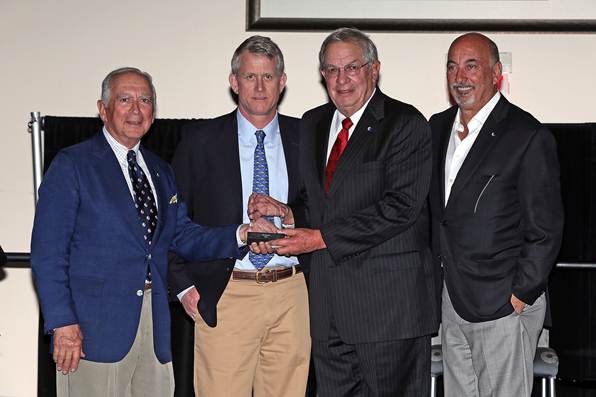 The Bob Akin Award “is given to a driver who best exemplifies the extraordinary qualities and characteristics that Akin represented, including a passion for motorsports and automobiles, a high level of sportsmanship and fair play, and who has contributed to the sport of motor racing and the community at large.” As someone who knows the amazing work that Bill Warner does and the passion that he brings to it, I whole-heartedly agree with Akin’s son Bobby, RRDC members Brian Redman, Archie Urciuoli, and RRDC president Bobby Rahal’s choice to honor Warner. The impact that Bill Warner has made on the automotive community both internationally and in the United States, especially Northeast Florida, is beyond measure. 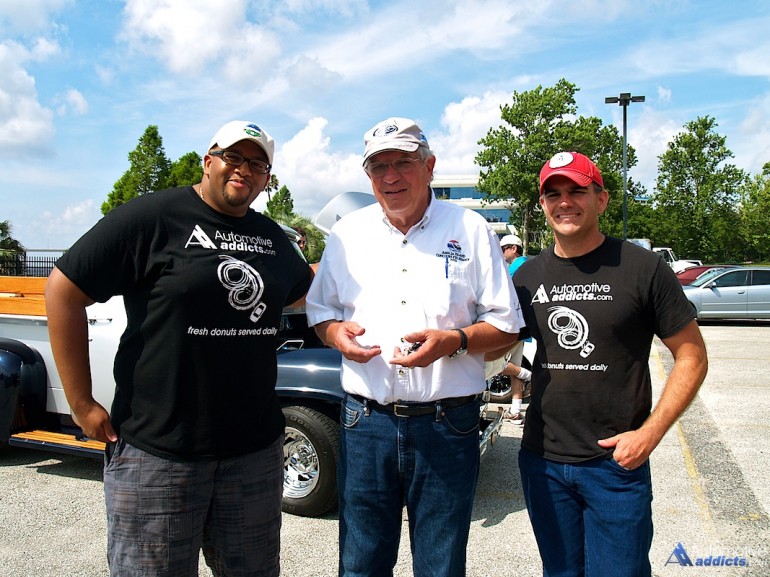 From the Road Racing Drivers Club:

DAYTONA BEACH, Fla. (Jan. 22, 2015) – Bill Warner, best known as the force behind the hugely successful Amelia Island Concours d’Elegance since 1996, received the 2014 Bob Akin Award from the Road Racing Drivers Club at a dinner prior to the running of the Rolex 24 At Daytona, the season opener of the 2015 TUDOR SportsCar Championship.

Each recipient of this honor, considered the top award in motorsports for amateur, vintage/historic or semi-professional drivers, is selected by Akin’s son Bobby, RRDC members Brian Redman and Archie Urciuoli, and approved by RRDC president Bobby Rahal.

The distinctive trophy was conceived by the RRDC in 2003 to honor the memory of longtime RRDC member and past president Bob Akin, who lost his life in a racing accident in 2002.

It was designed by Steuben Glass in Corning, N.Y., and is given to a driver who best exemplifies the extraordinary qualities and characteristics that Akin represented, including a passion for motorsports and automobiles, a high level of sportsmanship and fair play, and who has contributed to the sport of motor racing and the community at large.

The primary award, etched with the names of the recipients, is displayed at the International Motor Racing Research Center in Watkins Glen, N.Y. Each honoree receives a smaller replica.

Warner, who lives in Jacksonville, Fla., with his wife Jane, is a man of many talents and accomplishments. He’s a professional photographer, writer and race-car driver. With a degree in Electrical Engineering, he entered the family filter business and worked on the side for Sports Car Graphic Magazine and, in 1971, began his relationship with Road & Track Magazine, which continues today.

His photographs and articles have appeared in numerous major publications and his photography has won awards from The Los Angeles Art Directors, The Cretive Arts Yearbook, and the SCCA (Photographer of the year 1970).

He’s a Cannonball Baker Sea-to-Shining-Sea Memorial Trophy Dash alumnus, and began his amateur racing career in 1978. His drive to fifth place in the 1982 American Road Racing Amateur Road Racing Championships at Road Atlanta in the GT-3 class earned him a nomination for the RRDC Mark Donohue Award.

His most notable achievement, however, is the founding of The Amelia Concours d’Elegance, set on Amelia Island near Jacksonville, Fla. In the 17-year history of the show, it has raised over $2.25 million dollars for Community Hospice of Northeast Florida, Spina Bifida of Jacksonville, The Navy-Marine Corps Relief Society, and the Shop with Cops Program of Fernandina Beach and Nassau County (Fla.).

He’s been honored with numerous local and national awards, including the Lee Iacocca Award for “Dedication to Excellence in Perpetuating an American Automotive Tradition.” In addition, he was recognized as one of the “Top 50 Players in the Classic Car World” by Octane Magazine.

He is a recipient of the Air Force Commendation Medal and the Florida Service ribbon and served 30 years in the Florida Air National Guard, retiring at the rank of Major.

Warner was presented the Bob Akin award by Urciuoli. Bobby Akin and Rahal. “This award is presented annually by the RRDC to a race driver who best represents Bob Akin’s attributes,” said Urciuoli, “which boils down to three things: a real interest in cars as an avid and enthusiastic competitor, someone who’s a sportsman and a gentleman – in abbreviated terms, a ‘good guy’ – and finally someone who has given back a lot to our sport and the community at large.”

Urciuoli added, “Our hearts go out to the Akin family because Ellen, who was Bob’s great partner for so many years, passed away just about three weeks ago. So, we’d like (Bob and Ellen’s children) Bobby, JoJo and Susie to know we’re thinking about them.”

“Some might say Bill Warner won this award because he drove countless races furiously behind the wheel, whether it was in a competitive series such as the Firehawk Series in the ’80s or most recently in his ex-Group 44 Triumph,” said Akin. “There are others who would say he won the award for his amazing writing in some of the world’s great automotive publications, such as Road & Track, Car and Driver; the list is endless. And then there’s probably the biggest group that would say that he has built something over the years that is amazing: The Amelia Island Concours d’Elegance. The Amelia Concours generates huge amounts of money for charity and gives back in ways you can’t imagine.

“On a personal note, I would say, like Archie said, Bill is a ‘good guy.’ Every year for the past I can’t tell you how many years the first words he would say to me, usually here in Daytona, would be ‘How’s your mom?’ and I’d say ‘She’s doing good.’ ‘Tell her I asked about her,’ he’d say. And I would and she’d always say, ‘I love that guy.'”

“Bob was a great friend. We worked together on features for Road & Track Magazine, we raced against each other when I was driving a Camaro and he was driving a Porsche. And we raced together in one 24-hour race for Jack Roush.

“Like the photographer/driver thing, he was a gentleman’s gentleman and a driver’s driver. And I can’t thank the RRDC enough for this award.”

About the RRDC:
The Road Racing Drivers Club was formed in 1952 as a way to give champion drivers a say in their sport, particularly in the areas of safety, and has evolved to serve the future of road racing by mentoring new drivers on both amateur and professional levels. The Club’s membership includes leading industry professionals, race officials and motorsports journalists, in addition to prominent racing names.

In 2011, the RRDC launched a free on-line training seminar –  www.SAFEisFAST.com – featuring more than 30 RRDC members and other industry experts in high-quality videos covering subjects from physical and mental preparation to driving techniques, driver safety to car setup and sponsorship. The videos are updated regularly. Each week, a professional from the world of motor racing answers readers’ questions on the site in a feature called “Ask a Pro.”

The RRDC presents three annual awards: the Phil Hill Award, the Mark Donohue Award, and the Bob Akin Award, and supports the Team USA Scholarship, which has been assisting young Americans in the early stages of their careers since 1990.

Membership in the RRDC is by invitation only. Additional information on the organization may be found atwww.rrdc.org.