Exciting news from our friends at The Amelia Island Concours d’Elegance: 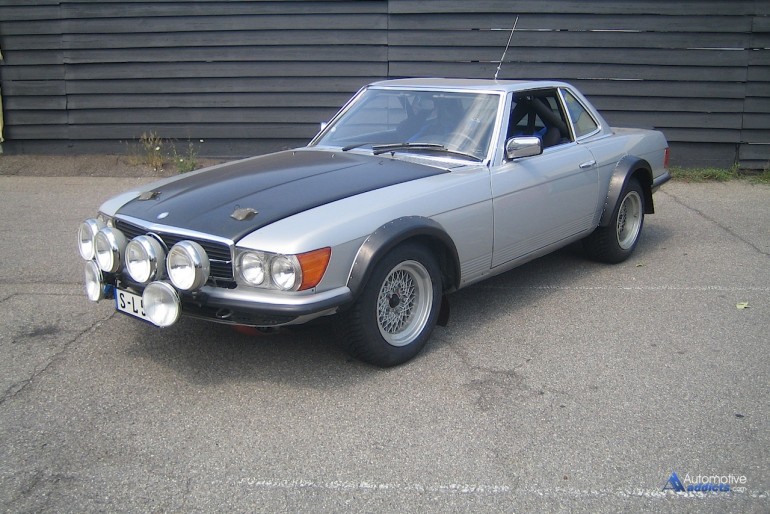 The Mercedes-Benz SLs have earned a well-deserved reputation as civilized, high speed, high-comfort grand touring coupes with the emphasis on speed and comfort. The Mercedes-Benz SL family is the antithesis of the typical smaller, radically modified versions of  mass produced economy cars or the specially created, single purpose (sometimes single use) cars that have become common in the World Championship rallying.

In 1978 Hannu Mikkola’s 450 SLC won the brutal Bandama Rally for Mercedes-Benz on Africa’s Ivory Coast. Bjorn Waldegard followed up with another Mercedes SLC Bandama victory in 1979, all clearing a path to the 500 SL Rally’s role in the World Championship.

The 500 SL Rally is a one-off prototype intended for the 1981 World Rally Championship. With a shortened wheelbase, 220-pound weight reduction and a modified 5-liter 320 hp V-8 light alloy engine, the 500 SL Rally was an improved, refined and more powerful version of the 1979 and 1980 Bandama winners. It was never permitted to fulfill its intended mission when Mercedes-Benz ceased its rallying activates at the end of the 1980 season.

After duty as a test and reconnaissance car for the Bandama Rally, the 500 SL Rally was assigned to Scuderia Kassel, a German dealer team, for the 1982 and 1983 German Rally Championship.

“It’s an unexpected treat to have this extraordinarily rare Mercedes-Benz on the field; the 500 SL Rally is a radically different take on the entire rally car ethos,” said Mark Becker, Vice-Chairman of the Amelia Island Concours d’Elegance. “You can tell that there’s Le Mans and Mille Miglia DNA in the 500 SL Rally’s veins from the days when world championship sports car racing was a pure blood ancestor of today’s open-road rally championship.”

The unique Mercedes-Benz 500 SL Rally will join a small and exotic fleet of rally championship Lancias and Porsches on Amelia’s 20th anniversary field on March 15, 2015.