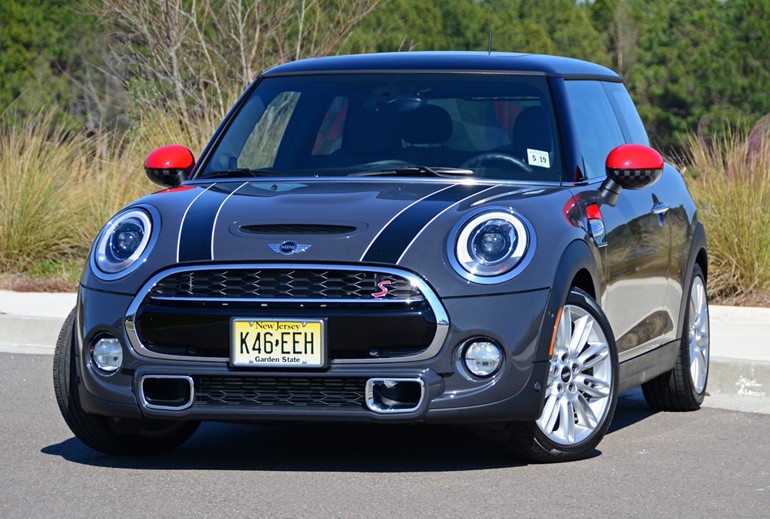 In the many years of car ownership it never crosses my mind as to really taking a liking to Mini Coopers. The smallish classification of a Mini alone was enough to shy me far away from the brand considering how I measure at 6 feet 3 inches tall. With the week leading up to our February 2015 Automotive Addicts Cars and Coffee show, I took my approach and expectations to a new Mini Cooper S being dropped off as the test vehicle for the week with a grain of salt. To my surprise, it felt confident and leaving me well pleased with what the latest Mini Cooper S had to offer in terms of power, stability and its unforeseen accommodating size. The thousand or so spectators at our Cars and Coffee show also appreciated the Mini, who were just as equally shocked as I was, in a good way. 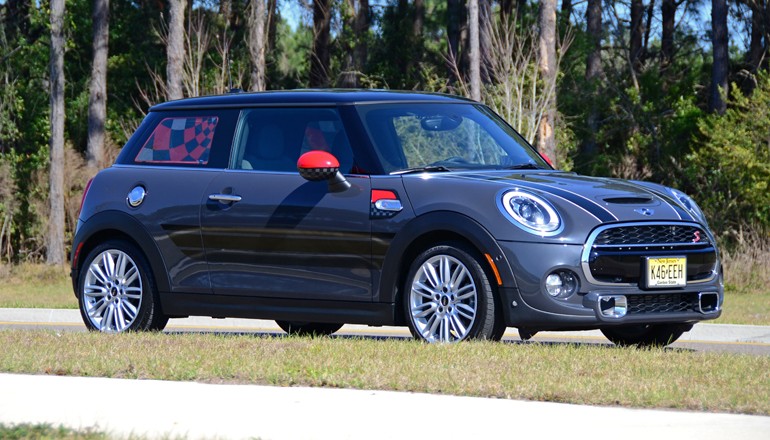 The 2015 Mini Cooper S mostly continues its size increase and refresh received as a 2014 model with the Cooper S trim getting a 189 horsepower and 207 lb-ft of torque 2.0-liter dual-scroll turbocharged 4-cylinder engine. The powertrain, mated to a 6-speed automatic transmission, seems to be the fitting choice for such a vehicle making it nimble and eager to put a smile on enthusiast faces. 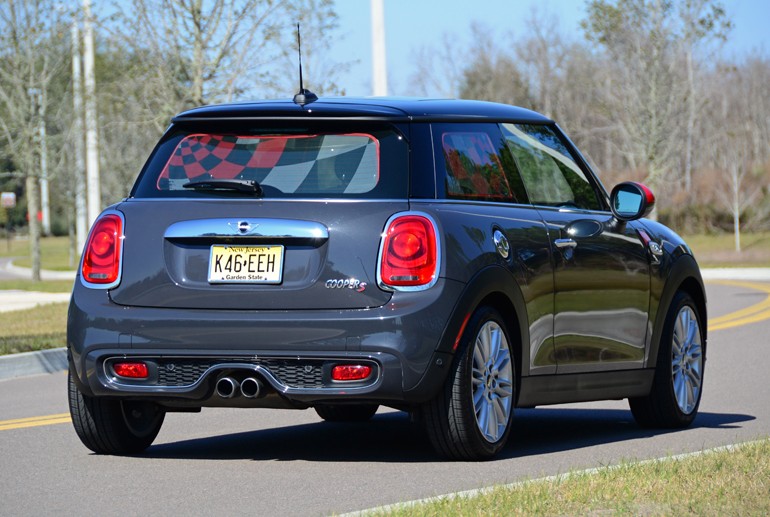 There is no getting around the idea of the Mini Cooper S still being a small vehicle. However, looking at the sum of its interior accommodations up front and out back, two adults will find the front more than spacious. I even found myself moving the driver’s seat forward to find the optimal position for piloting the new Mini Cooper S and all its turbo-surging power through the front wheels. The front seats are just the right size with enough bolstering and twill-like-stitched cloth seats to keep you planted while tossing the short-wheel-based Mini around. Headroom is plentiful and the back seating area is just enough for children or “small” adults. Cargo space is an interesting act as the deep-pitted hatch area has enough room to stack 4 medium-to-small-sized suitcases, almost ideal for a weekend getaway for a few passengers.

Much of the driving character exceeded initial impressions as I selected the sport mode (one of three modes – normal, eco and sport), disabled dynamic stability control and opted to use the steering wheel-mounted shift paddles for the 6-speed automatic transmission. The gearing is ideal for the Mini Cooper S’ eager 2.0-liter turbo engine, while the transmission has a direct gearing feel through very limited use of its torque converter. It felt almost as if the turbo 4 was surging power to the front wheels through a dual-clutch unit. The only pitfall of it all was the delay in shift response after use of the shift paddles, in addition to limiting the rev-matched down-shifts from going anywhere near the 6,500 rpm redline. Nevertheless, the Mini Cooper S’ turbo 4-cylinder is always ready to dial in power with no noticeable turbo lag down low and only a hint of power loss at redline. Moving the nearly 2,800 pound Mini Cooper S up to 60 mph takes about 6.4 seconds, quite a respectable performer. 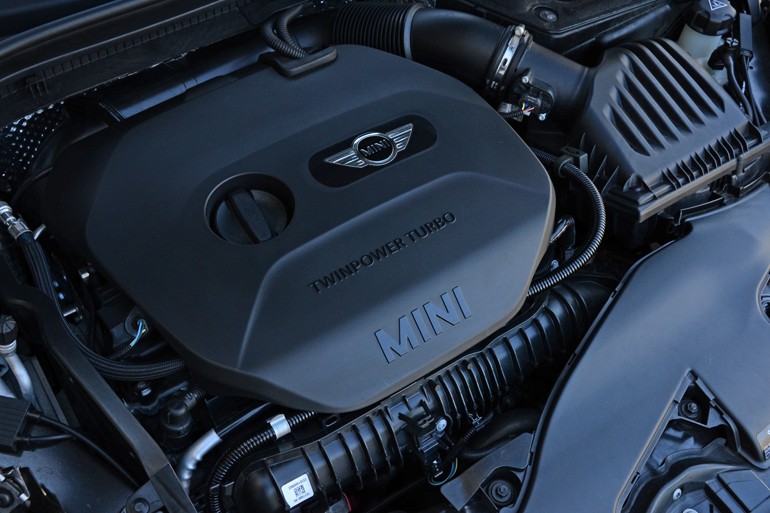 It is almost funny to say and witness, but the Mini Cooper S has no problems with performing a front wheel burnout. Yes, I had to do it, because it was just too easy with the front tires breaking loose at just about every hard acceleration from a dead stop. The tires would even bark during a 1-2 gearshift at times. The Mini Cooper S is a daringly fun sport box on four wheels, to put it bluntly. The lateral handling is pretty predictable, as is its ability to give you a dash of feedback through the steering, mostly in sport mode when a little of desired weight is added to the electric rack. 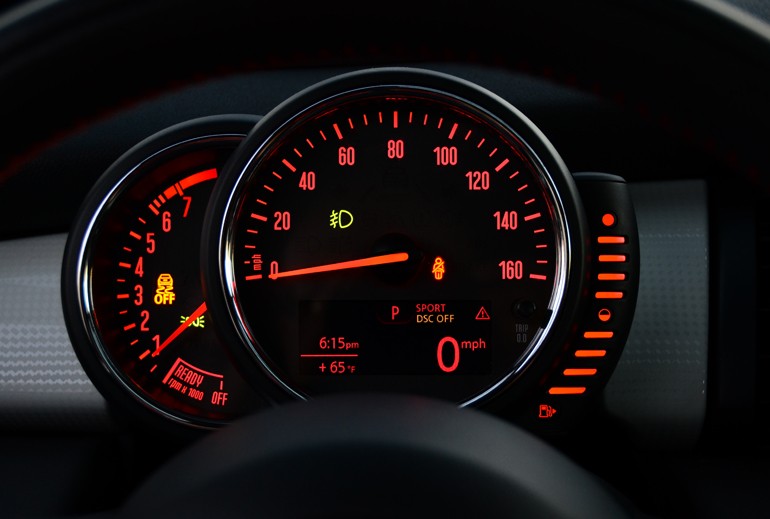 Fuel economy and range is astounding even with a smallish 11.6 gallon gas tank. I was able to just meet the EPA estimated 27 mpg city and 38 mpg highway figures coming away with an average of 29.6 mpg during mixed driving. The only times I saw fuel consumption dropping below the 27 mpg figure was in sport mode shifting the auto trans manually while listening to the reverberating exhaust popping noises upon downshifts. 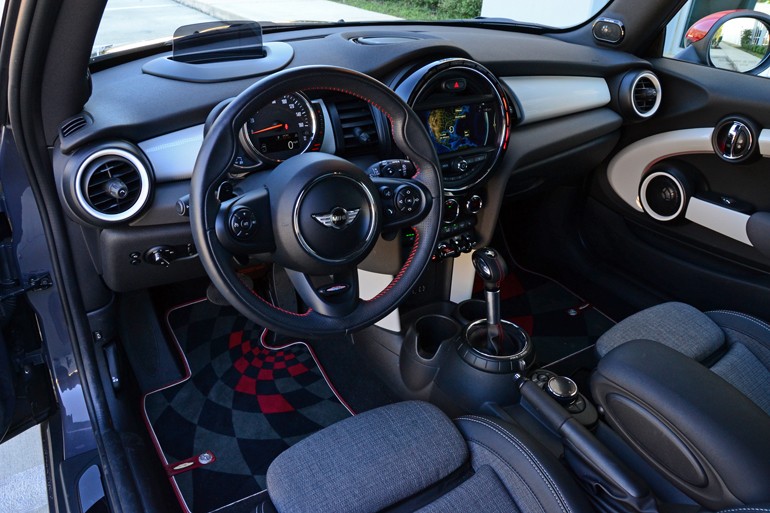 In its largest form, growing from the last redesign in 2014, the Mini Cooper is an exceptionally appealing vehicle to most enthusiasts. For the mainstream, the Mini Cooper S is stylish and unmistakable among its sub-compact competition. With the addition of a few exterior tweaks, through the availability of a full set of LED headlights, fog lights and cornering lights, the Mini Cooper S exudes a taste luxury from the outside. The larger 17-inch wheels shod in run flat rubber all bring the sensibility formula of the Mini Cooper S to an understandable level. The feature-rich interior all placed in their unique positions and control sets all add to the Mini MOTORING appeal. 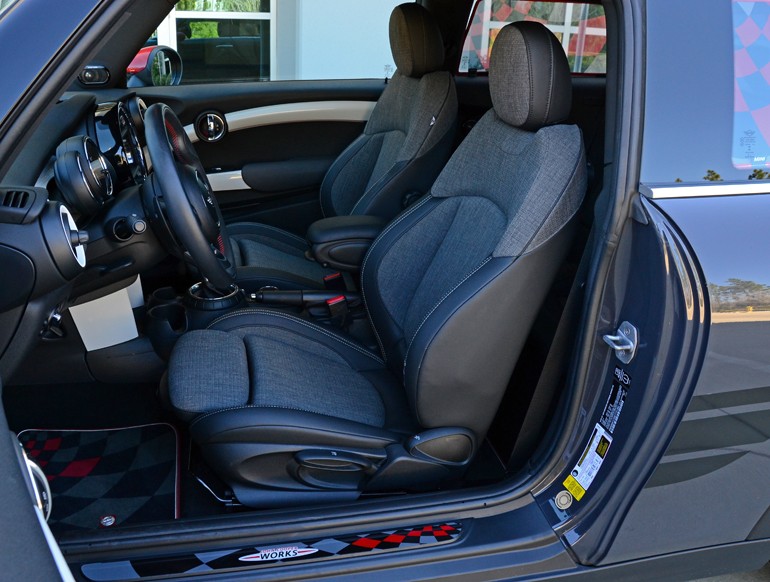 If there ever was to be mass-marketed front-wheel drive “small” BMW in America, the Mini Cooper S is it. As expected, the Mini Cooper S, in my test vehicle form, is loaded with BMW content, even featuring the latest iDrive infotainment system with touchpad taken from BMWs but touted as the Mini Navigation/Connected XL feature sets with enhanced Bluetooth/USB connectivity options, all as part of a Fully Loaded package. Encasing the infotainment system inside of the rounded center stack on the dashboard is a unique aesthetic for Mini. Even the encasement around the dashboard center unit has an amusing and fun multi-colored LED ring to visualize with a series of lights many vehicle functions and even the rpm status, part of a Mini Excitement package. The optional Harmon Kardon audio system, part of the Premium Package, includes a massively-sized panoramic roof and automatic dual climate controls, played tunes to crisp and unfiltered tones followed up with quick and deep bass. The small interior volume may have had something to do with it. Regardless, it sounds great. 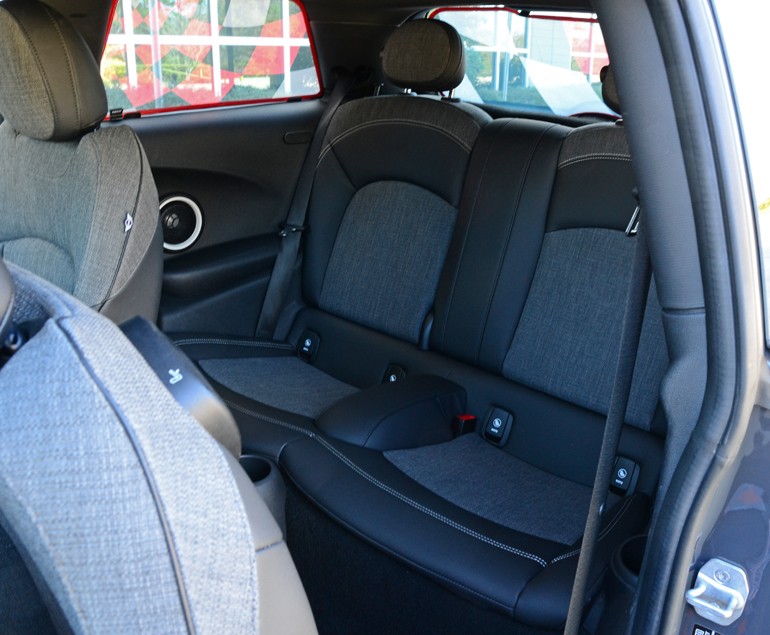 Many of the controls in the new Mini Cooper S find their welcomed placement to those accustomed to BMWs. It is possible that this does add some value points for the Mini Cooper S, considering my test vehicle loaded with several options packages and many John Cooper Works (JCW) add-ons, comes to an as-tested price of $36,895. The Mini Cooper S can undoubtedly be a feature-rich vehicle in a smallish package, but I totally get the true value in how well it performs. Interesting to note, the base Mini Cooper S starts at just $24,100, making quite the room for an onslaught of optional content, nearly to the point of a well-equipped $50K BMW for a lot less. Still, the new Cooper S is good value for a potentially feature-laced small sporting vehicle, if you select the options in moderation.