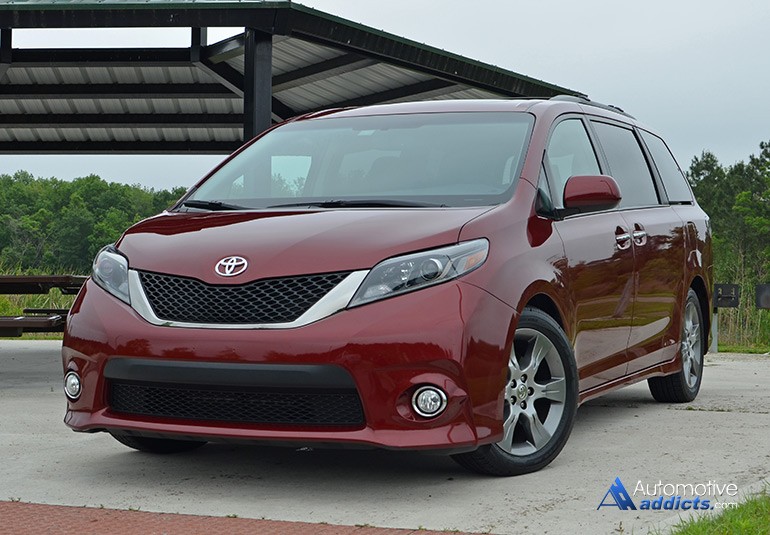 In my past decade of reviewing vehicles the minivan has remained to be a segment that continues to take me by surprise. Being that minivans are one of my least favorite types of vehicles, those surprises come two-fold as we are currently witnessing a new automotive age where SUVs and car-based crossovers are a growing dominant force in modern suburbia. Still, the minivan remains to be an exceptional alternative for those who require 7 to 8 passenger seating and do not wish to deplete the family banking account for such transportation in a large SUV. A strong staple in the minivan force remains to be the Toyota Sienna in its 3rd generation getting a refresh for the 2015 model year with an updated grill, taillights, added rigidity and a retuned suspension. 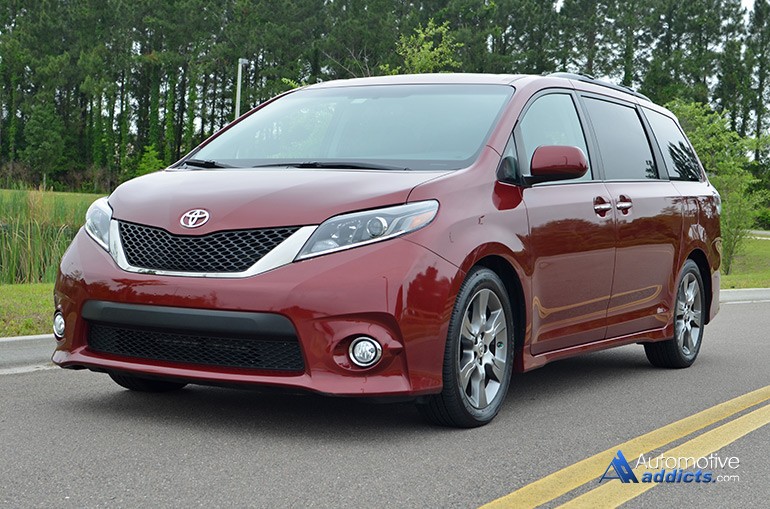 The 2015 Toyota Sienna comes as a vehicle that offers several trim configurations and a rare all-wheel-drive option – potentially setting it apart form the expected minivan segment. Powered by a proven engine in Toyota’s 3.5-liter V6, the Sienna scoots along with authority, providing plenty of acceleration. With 266 horsepower and 245 lb-ft of torque on tap, the Sienna moves along to 60 mph in just under 8 seconds. 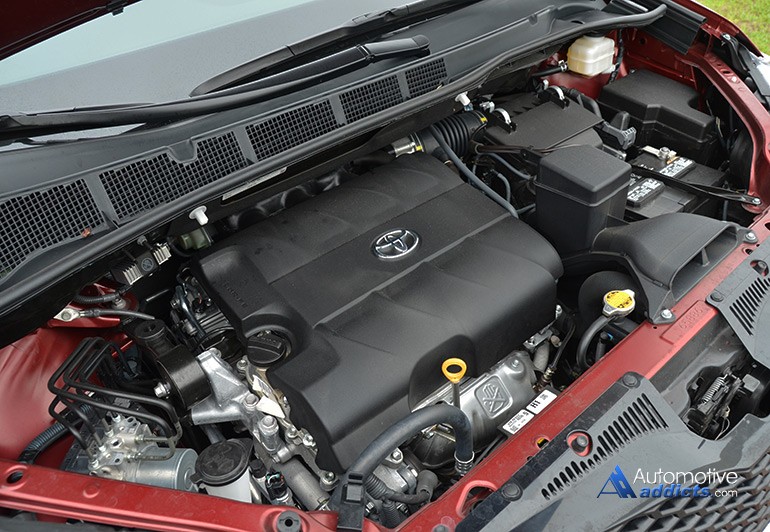 The consistency of power delivery from the robust V6 seems larger than the numbers on paper. Power directed through a tried-and-true 6-speed automatic transmission is sure to serve duty for six-figure odometer readings without issue considering Toyota’s exceptional durability.

Fuel economy is respectable at an EPA-estimated 18 mpg city and 25 mpg highway. I saw a steady 23 mpg keeping up with traffic on the interstate and my best of 26.7 mpg traveling at a constant 60 mph for about 20 miles. Around town I saw about 18.3 mpg, nearly matching the EPA estimates. 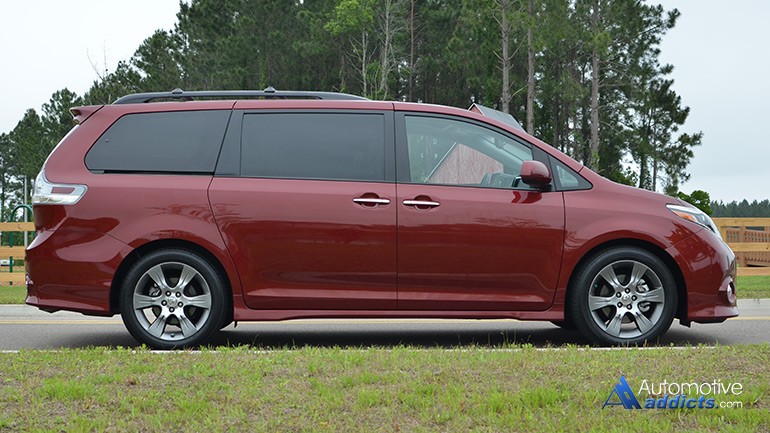 At the front of how minivans are perceived, it is refreshing to have a sportier character out of the Sienna with my test vehicle’s SE trim level. With that, you get a darkened headlight housings, LED daytime running lights, a sporty grill up front, clear LED tail light lenses and dark-finished 19-inch alloy wheels. The adopted “swagger wagon” disposition has never been so fitting in the 2015 Toyota Sienna SE.

We have to have a little fun in getting a minivan for the week as one of our test vehicles. In the standard front-wheel-drive configuration, the Toyota Sienna exhibits quite a bit of wheel spin if you take light to our enthusiastic nature. Acceleration is strong and the sport-tuned suspension of the SE trim adds a bit of stability that seemed to be missing from other minivans in the same class. I can say, when directly compared to the Honda Odyssey, the Sienna SE has a good chance to win over enthusiastic drivers due to how planted the chassis feels and how it reacts to inputs from stiffer springs and higher damping rates.

The 2015 Sienna SE brings an added level of confidence in the way it handles itself around town and on the highway. Ride quality does not seem to diminish much from the sport suspension, either. The larger 19-inch wheels not only add to the style of the Sienna SE, but they attribute to added handling, which was one of the few traits in the Sienna minivan that I appreciated as an enthusiast over previous year models. 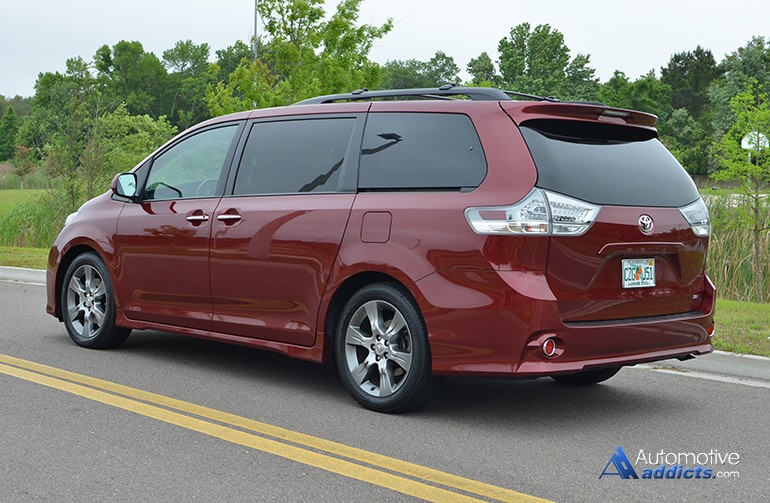 With the 2015 Toyota Sienna SE, our time turns into an adventure, one that begs us to load up our families and hit the road while the kids enjoy the optional seat-mounted dual DVD LCD screens. Everyone out back gets to enjoy my voice amplified through the Driver Easy-Speak (intercom) system to tell them how far away from Wally World (Disney World) we are. The Easy-Speak system is rather ingenious by simply using the roof-mounted microphone to amplify your voice through the rear speakers. 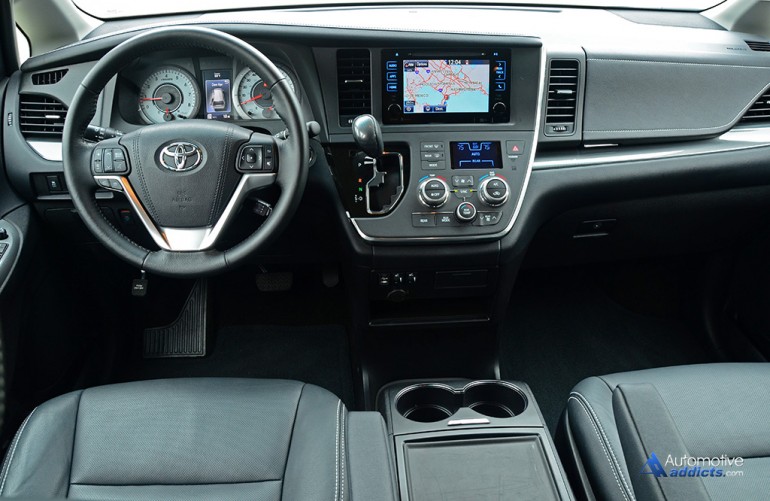 The cabin of the Toyota Sienna is vast, as it should be. Seating positions and trim have been reworked to be the best yet for the Sienna. In my 2015 Sienna SE trimmed test vehicle, the dashboard’s trim is faintly accented by stitching and a limited about of soft-touch surfaces, which all cumulate an eye-pleasing character. The plastics didn’t give way to a cheap thought, but nothing that is out of place in a vehicle that you don’t mind laying $40-large on. The updated infotainment system with its 7-inch touch screen and Entune app suite nicely integrates vehicle settings, audio controls, connectivity and the voice-activated navigation system. Most of the feature sets are easy to use but I found a few faults with the navigation system’s ability to be as user-friendly as the rest of the system when entering a destination addresses. The system had too much variance in finding addresses and the time it took to enter addresses in broke-up parts was quite unacceptable for 2015. It is possible that by allowing you to enter the address in one swoop would be the fix-all here. 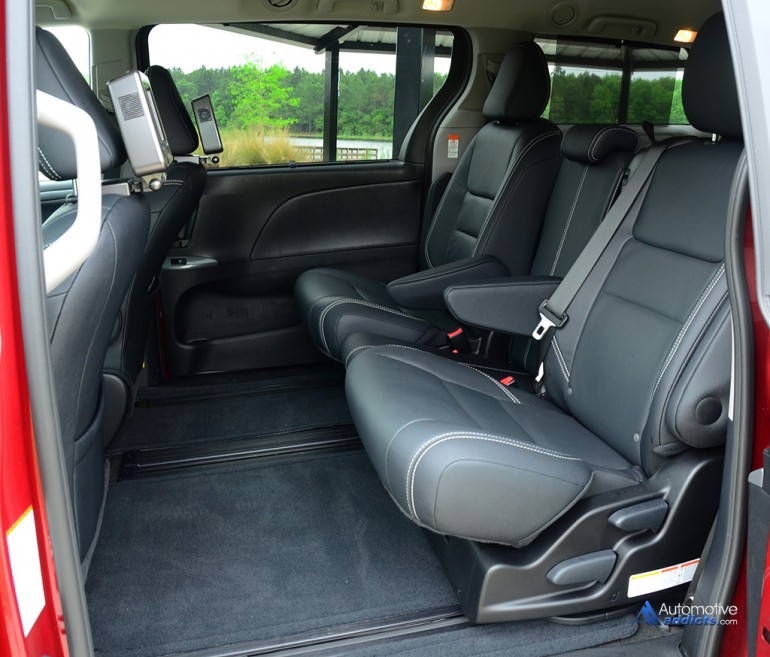 Seating accommodations are inviting with more than enough room to comfortably seat 7 passengers in my 8-passenger configured Sienna SE test vehicle. Use of the additional 8th seat, more of a jump seat placed between the 2nd row’s captain chairs, is apparently designated for a child or an extremely small adult. The narrow seat is almost mistaken as an out-of-place armrest that needs to be folded down for use. Aside from the smallish jump seat, the Sienna SE’s seating exudes a bit of luxury appeal from its perforated leather inserts to the accented stitching throughout. Entry and exit of the 2nd and 3rd rows is mostly easy by way of the power-sliding doors and the 2nd row having a lot of travel for sliding forward to access the 3rd row. 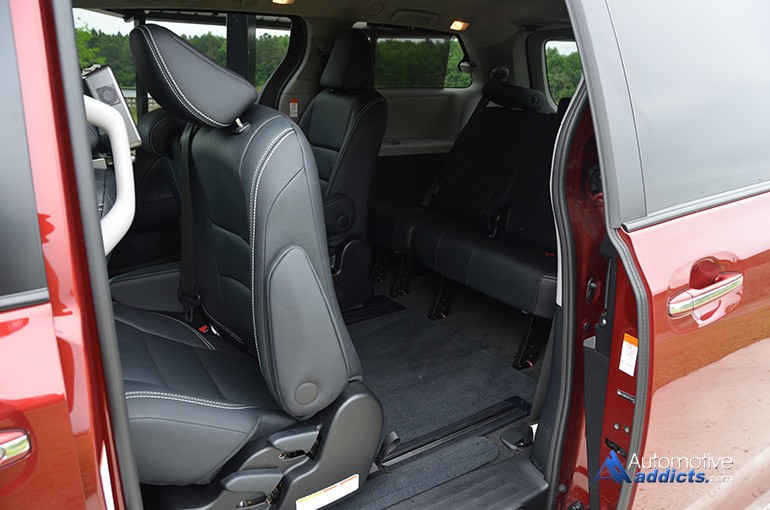 Folding the seats down and out of place into the floor for the 3rd row is a manual process. However, folding down the seats is a relatively easy task. There is some difficulty to folding and removing the 2nd row from its most-forward position, but the pay off is that it will open up the cargo space to a cavernous 150 cubic feet. Accessing this space is also a cinch thanks to the low loading deck and power tailgate. 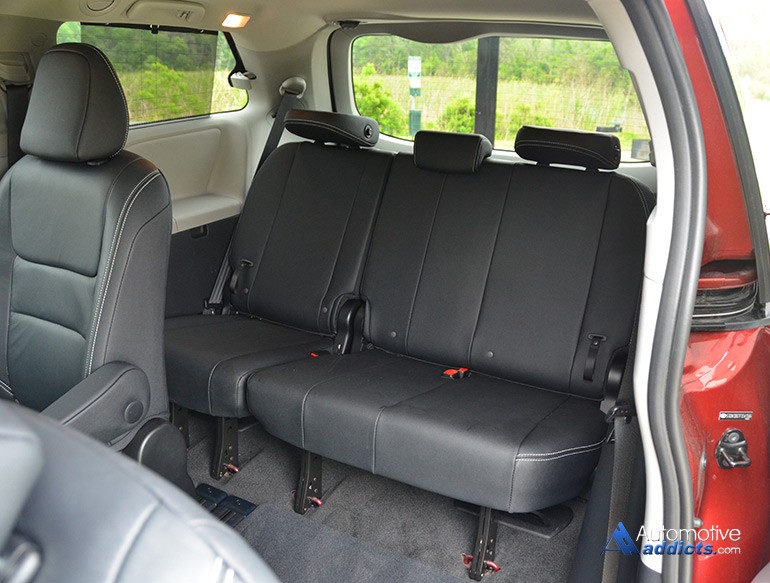