Redefining The Auction: Craig Jackson Sits Down with the Automotive Addicts 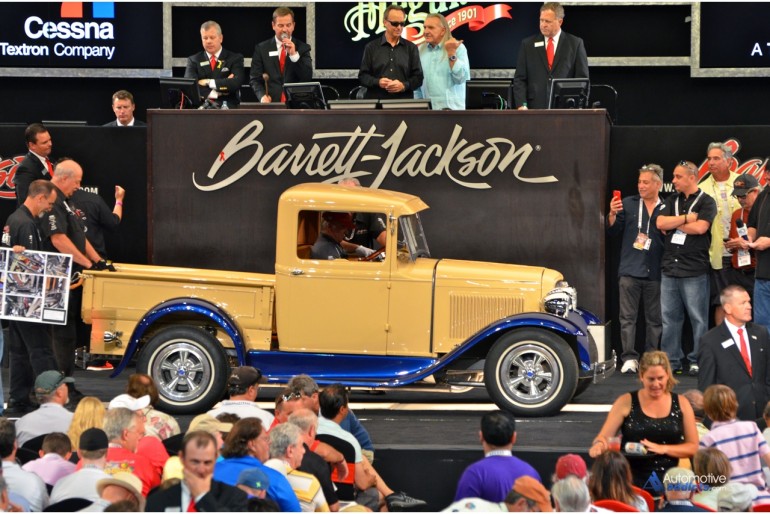 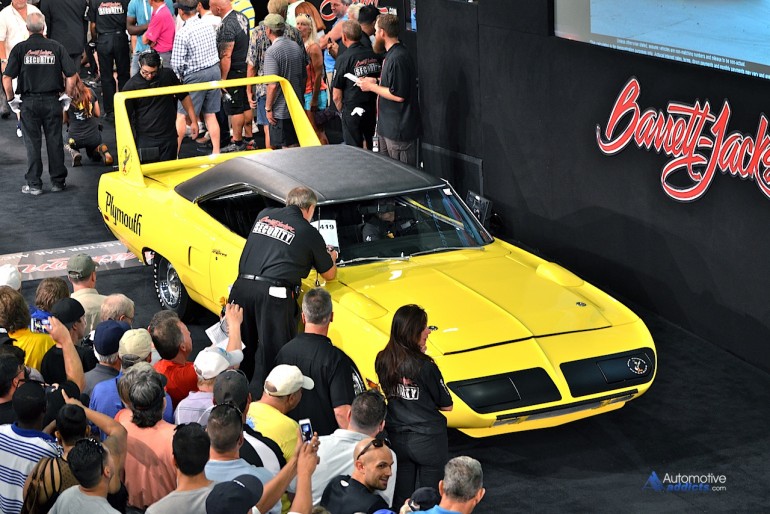 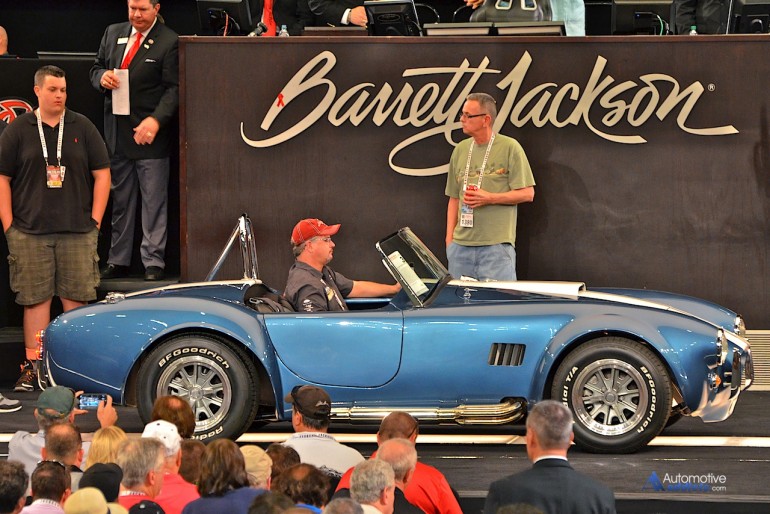 The first-ever collector car auction to go live on network television, the thirteenth Barrett-Jackson Palm Beach continued the tradition filling the airwaves with 19 hours of live broadcast on the Discovery family of television networks. If you love cars, there is a good chance that you spent a few minutes absorbing the high-definition collector car spectacle that essentially took over the Velocity channel for a week. 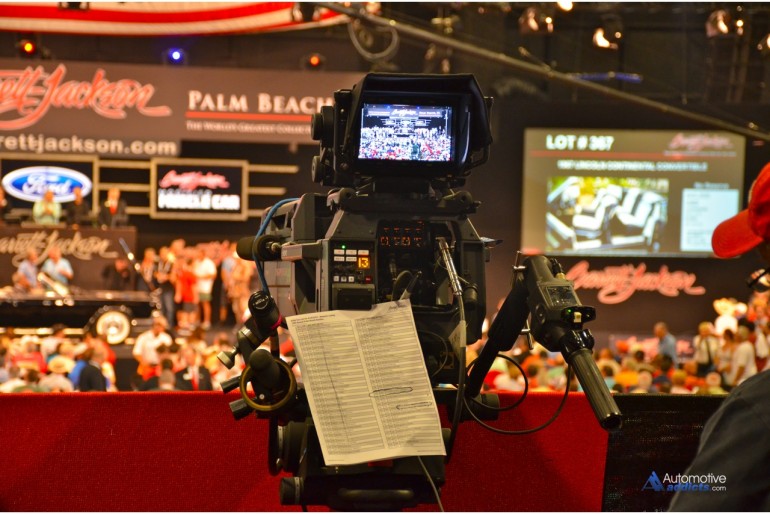 Last Saturday morning, the Automotive Addicts team loaded our camera bags into the 2015 Toyota Sienna SE that we are reviewing and headed from Jacksonville to West Palm Beach to check out the auction firsthand. The four-hour drive went by quickly. With minimal traffic and a quick stop for coffee along the way, we were there in no time. I think the anticipation-induced adrenaline might have helped, but the ride really seemed to fly by. 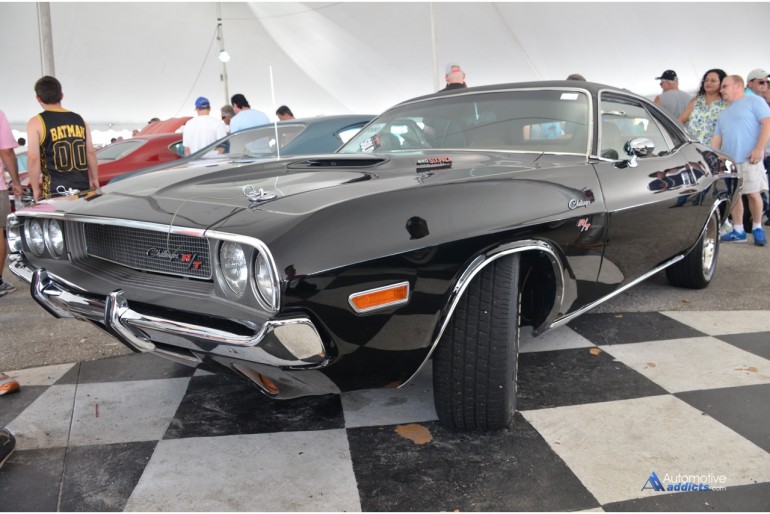 General parking at the fair grounds was free. Adult tickets were $15.00 in advance, $10 for seniors, military, and students. Children’s admission is only $7.00. Considering that a movie will set you back more than many of the Barrett-Jackson tickets, a day at the auction is a relative bargain.

Upon arrival at the event, Malcolm Hogan and I were able to sit down for a 30-minute one on one interview with Barrett-Jackson chairman and CEO, Craig Jackson. Craig was a gracious host, meeting us in his luxury RV to talk about the Palm Beach event, collector cars, the history and future of Barrett-Jackson, and the collector car market in general. 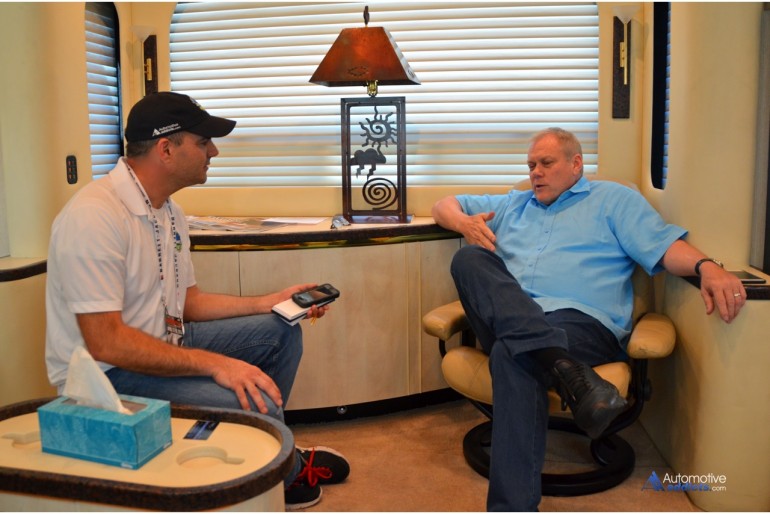 Craig Jackson (right), CEO and Chairman of Barrett-Jackson sits down with the author (left)

“Barrett-Jackson is a lifestyle experience. Anything that you like about cars is here.” Jackson sat up in his chair, faintly smiling, “If you want to take Dodge Hellcat drag races or hot laps in the Viper or the new (Chevy) Corvette or (Ford) Mustang, it’s all here. The ride and drives, the supercar display, the Dupont Registry, there are just a lot of things that Barrett-Jackson puts in one venue.” 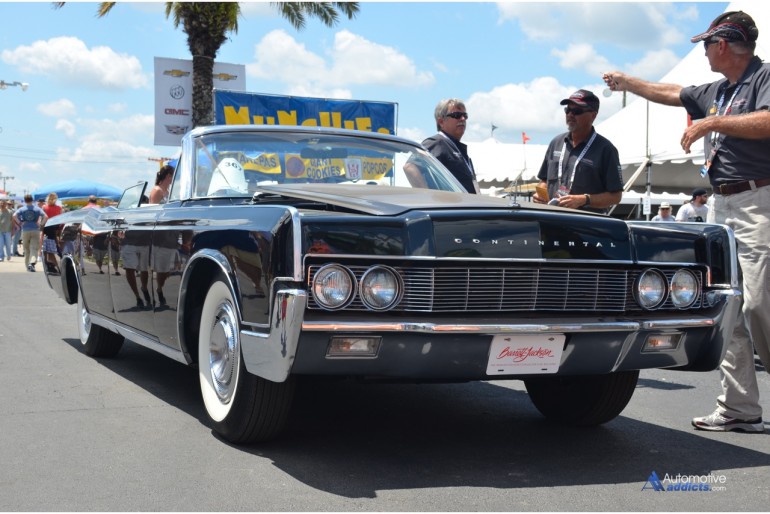 A 1967 Lincoln Continental Convertible prepares to roll onto the auction floor. The Lincoln would eventually sell, without reserve, for $55,000.

While the auction is center stage and enough to make the trip worthwhile, it is the once in a lifetime experiences that Barrett-Jackson includes in the ticket price that set the event apart. Walking the fairgrounds was stimulation overload. The animated vendors, the tents full of collector cars and celebrity sightings captivate your eyes while the sound of the thunderous Dodge Challenger and Ford GT500 ring in your ears. 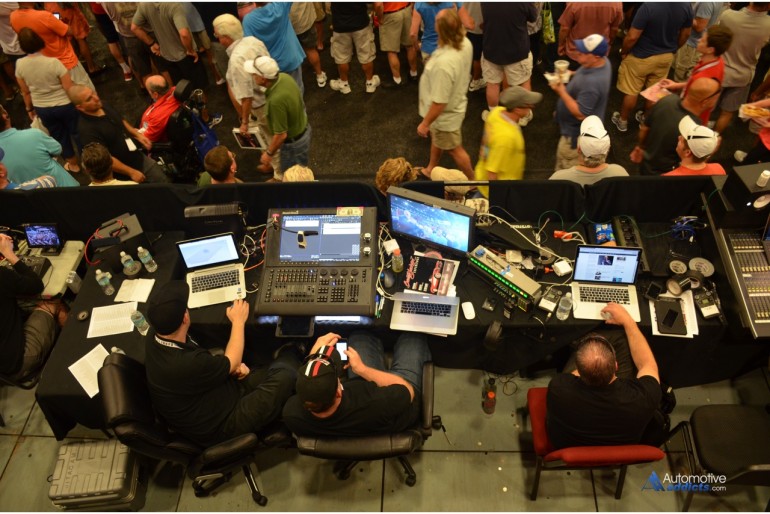 Wandering around the fairgrounds does not mean that you need to disconnect from the car buying action of the auction floor. Barrett-Jackson has long been a leader in integrating technology into the car auction experience, downloading the Barrett-Jackson app to your smart phone allows you to keep an eye on the auction while putting the rest of your body inside the new 2015 Ford Mustang for a spirited ride and drive. 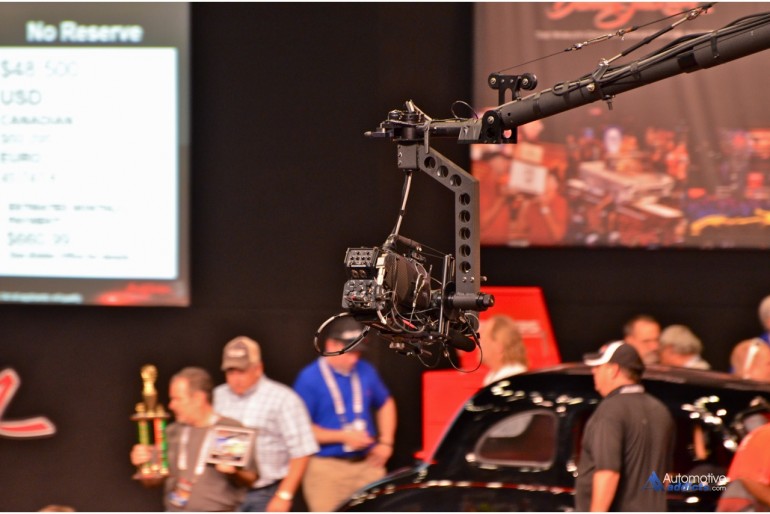 “Barrett-Jackson was the first one on the Internet in our industry,” Jackson explains. “I registered our domain in 1993 and had all of our cars on the web for the 1994 auction. By 1995, we were doing live Internet bidding, we wrote the program ourselves. We’ve always stayed pretty far ahead with technology. Anybody on any platform can stay in touch with us; our live stream is available on your phone, computer or iPad, whatever you want. As early adopters of technology, broadcast television, Barrett-Jackson has taken car collecting from just a small niche to the world.” 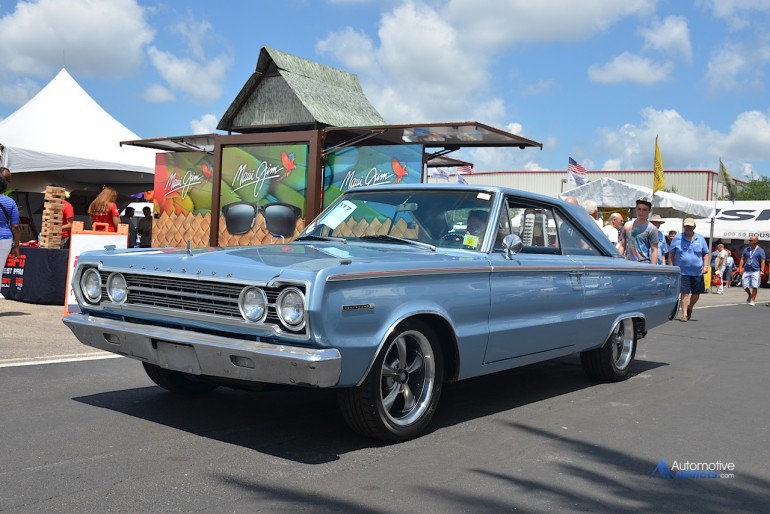 A 1967 Plymouth Belvedere II Custom struts its stuff on the way to the block. The beauty will eventually sell for $15,400.00.

Admission to the event is relatively inexpensive, but Mr. Jackson and his team have created an environment that makes it easy to spend quite a bit more.

“Barrett-Jackson is unique. We are predominately no reserve. We also have a team of experts that vet the cars. The best experts there are, not just our employees, we went out and got the best experts. And some people can say they got great experts, but these guys, like our Pontiac guy who runs Pontiac Historical Services, he has all the build sheets from General Motors. His wife was John Delorean’s secretary and when she heard that they were going to throw out all the build sheets she called her husband and they cut a deal with GM and bought all the old build sheets.” 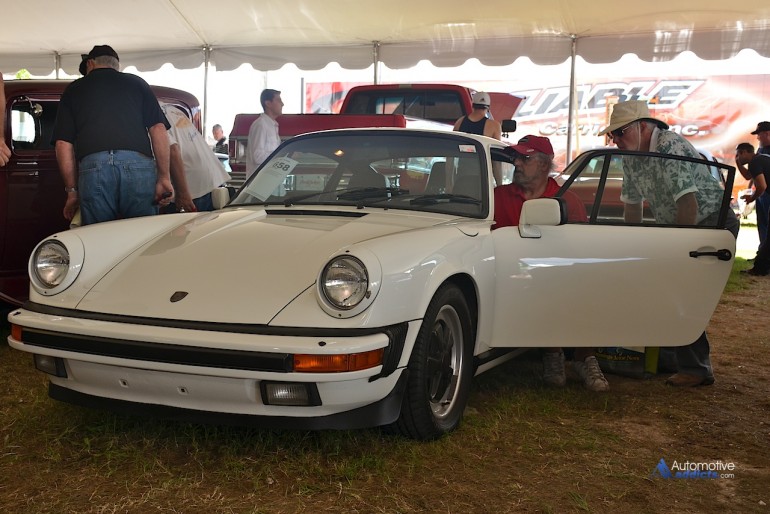 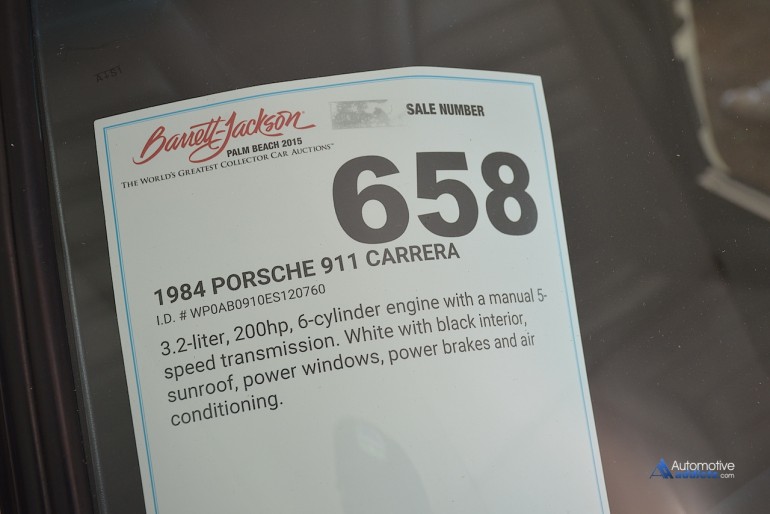 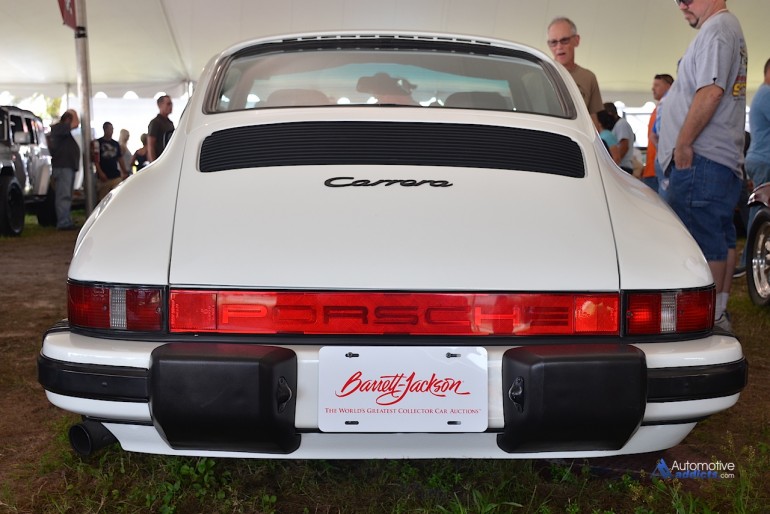 Jackson went on to explain that they also work with experts in Ford, Dodge, Chevrolet vehicles, individuals and groups with unprecedented collective knowledge and resources.

“We vet the cars before, we vet them when they get to Palm Beach to make sure they are what we are representing. While we aren’t guaranteeing them, we put them through a very fine tooth comb, they’ve gone through it.” 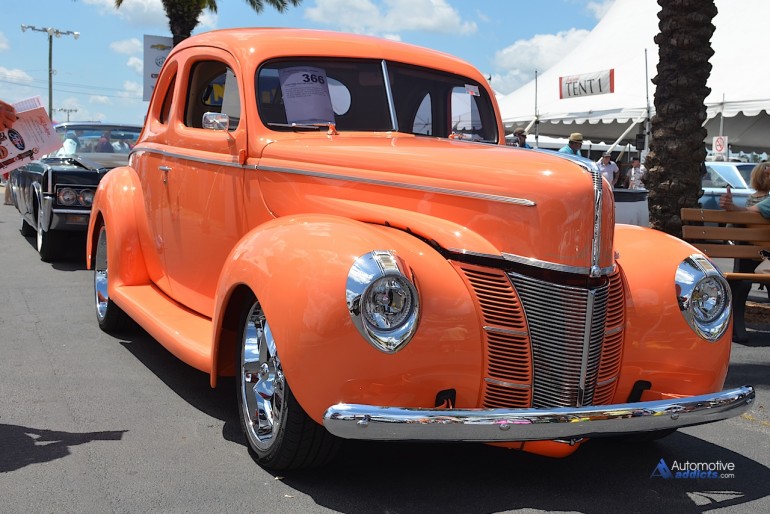 Jackson also stressed that car collecting is not just a “male sport.”

“We have more and more women buyers. Younger kids are getting into it. We’ve been on television for eighteen years, a whole generation has grown up watching us.” 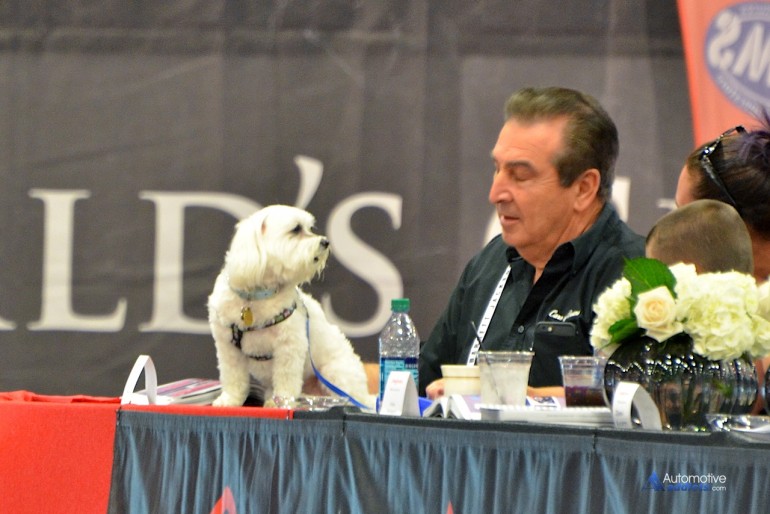 Even adorable puppies get in on the bidding

In hopes of getting some car buying advice I could pass on to my readers, I asked Craig what he saw as the next big thing in the collector car market.

“Late 70’s, early 80’s Trans Ams. I wasn’t a big fan of them when they were new, but there is a whole generation that grew up with them on television and on movies like Smokey and the Bandit. You see a lot of kids nowadays that like resto-mods and muscle cars, you have movies like Fast and Furious and Gone in 60 Seconds and all the video games where you can build your own car. What’s King Kong of Fast of Furious? It’s the big muscle cars.” 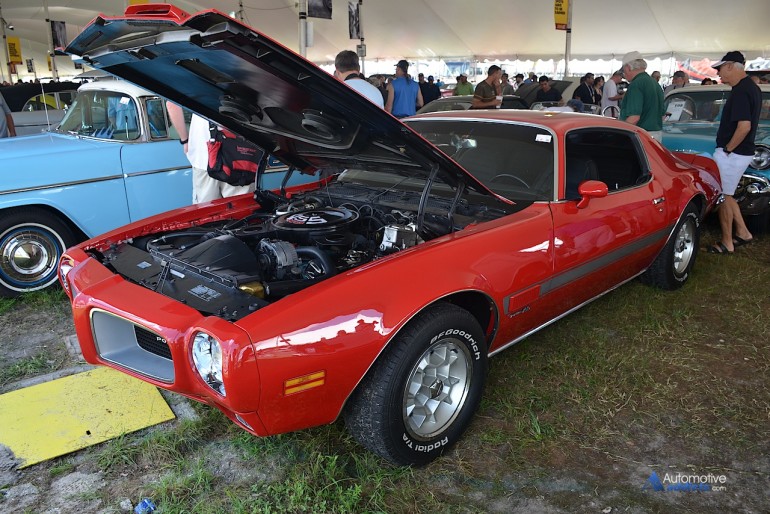 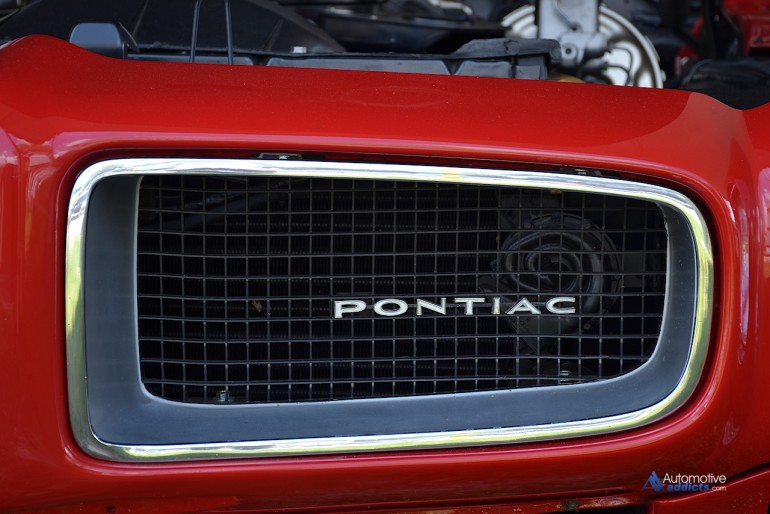 While the Palm Beach auction is certainly closest to home and the most accessible, you don’t have to wait until 2016 to pick up a Barrett-Jackson collector car. The Reno/Tahoe auction runs from August 6-8, 2015 and the Las Vegas event takes place September 24-26, 2015. For more on Barrett-Jackson, including dates for the 2016 Palm Beach event when they are announced, visit Barett-Jackson.com.