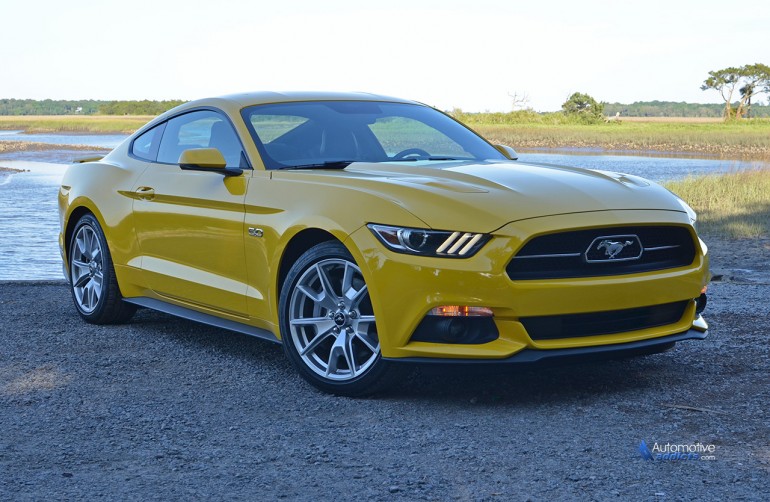 In the automotive world there aren’t many vehicles as iconic as the Ford Mustang. Just about anyone who isn’t living under a rock knows of the Ford Mustang and can easily point one out in a crowd, no matter the model, year, or color. As a tribute to 50 years of the iconic pony car, Ford has unleashed a 50 Years Edition, marking a paramount in American automotive ingenuity and design for the famous pony muscle cars. 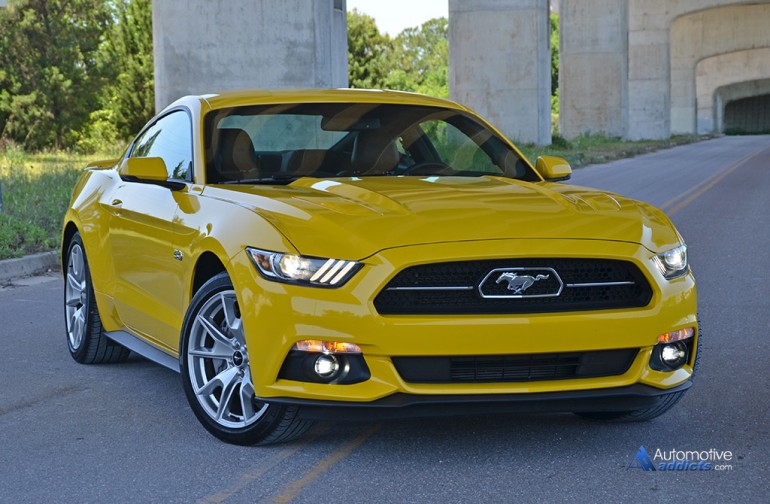 The 2015 Ford Mustang is completely new, casting a new design forged in the light of technology and forward thinking. The most notable change for the new 2015 Ford Mustang, apart from its obvious fresh exterior styling, is the use of a new independent rear suspension setup finally parting ways from the solid rear axle. 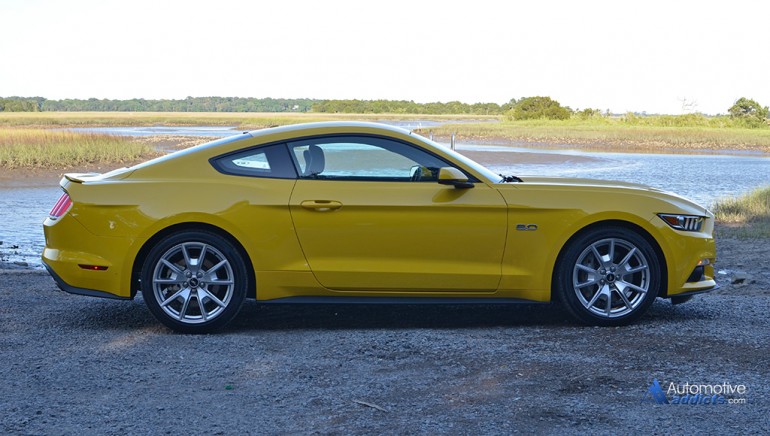 Carrying over for the GT model is the Coyote 5.0-liter V8 engine now reworked with new internals and improvements to pack 435 horsepower and 400 lb-ft of torque. The Mustang can also be had with the 3.7-liter V6 producing 300 horsepower and 280 lb-ft of torque. New to the Mustang crop is a turbocharged EcoBoost 2.3-liter 4-cylinder engine making due with 310 horsepower and 320 lb-ft of torque and still managing to hit the EPA estimated fuel consumption numbers of 22 mpg city and 31 highway in the 6-speed manual configuration. My 5.0 Mustang GT was dead set on a consisting 15 mpg city, 25 mpg highway and 19 mpg combined during my week, perfectly matching its EPA estimates. 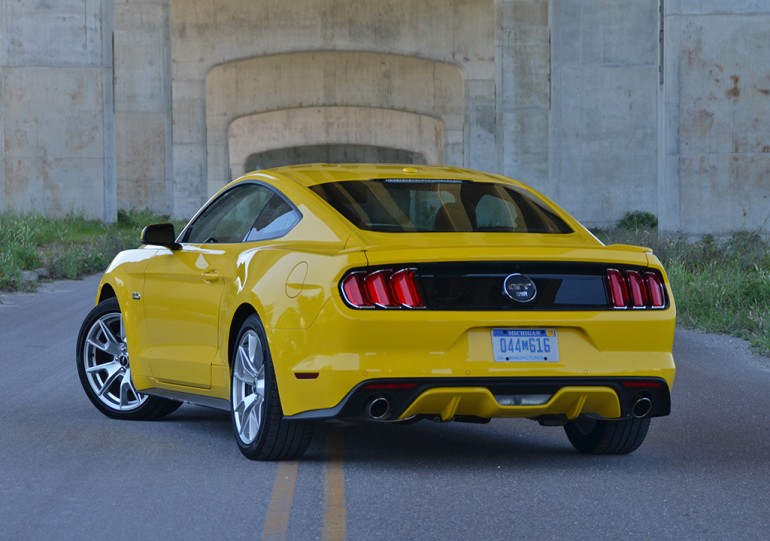 My experience with the new 2015 Ford Mustang starts with the GT dressed up in a Triple Yellow Tricoat exterior paint featuring the 50th Anniversary Package. In my week’s time with the new Mustang the takeaway remains to be positive in knowing how a mass-produced mainstream American muscle car has wrapped itself around modern tech to be the best offering yet.

At the end of performance, the new 2015 Ford Mustang GT is the prided muscle car we have adorned with accolades for several decades now. In the newest form, it takes on a new approach with better stability in its stiffened chassis and power directed to the rear wheels through a limited slip differential and independent rear suspension. The new independent rear brings something that has been missing to the Mustang table where the rear now appears to limit lofting around and is quite controllable under tire spins, burnouts and those occasional drifts with stability and traction control disabled. 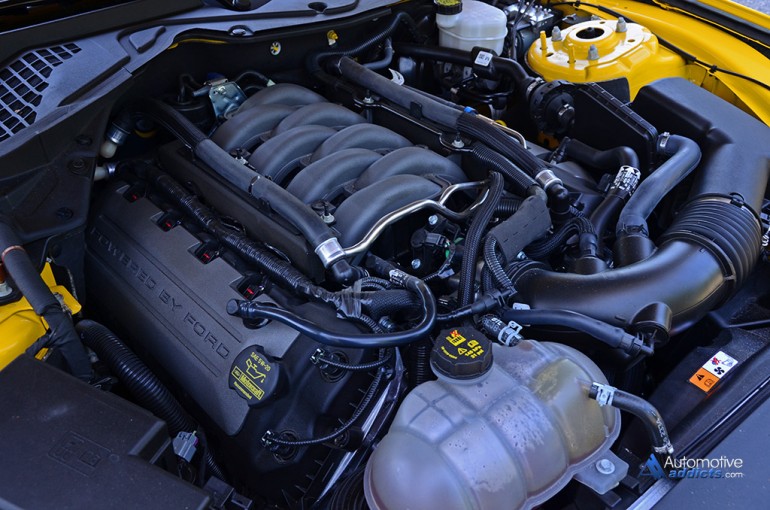 The latest 5.0-liter V8 does its naturally-aspirated duties in an expected manner, leaving not much to be desired in the area of power output for its price point. The joys of my test vehicle’s revised Getrag 6-speed manual transmission are nirvana for an enthusiast like me. The revision of the 6-speed manual attributes to a solid feel through each gear and gate. The synchronizers and linkage have been improved for low drag and a confident shift each and every time. Banging out 1st to 2nd shifts have never been so rewarding making you feel like a pro at 7,000 rpm. 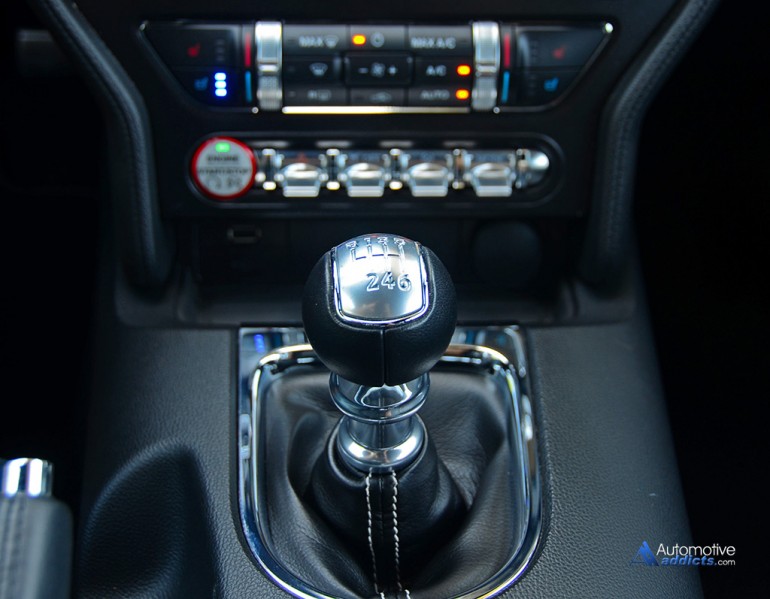 Several new additions to the 2015 Mustang make it an enticing buy for a pony car. Features such as a line lock system, enabling you to lock up the front wheels while you perform burnouts like a pro, and a launch control system that permits a starting RPM hold setting for perfecting those red-light hole shots and drag strip endeavors. Of course, Ford wants you to put the new Mustang on a drag strip, they practically insist on it. Speaking of drag strip, the new 2015 Ford Mustang GT 6-speed manual is good to reach 60 mph in just 4.7 seconds. Use of the Track Apps through the center-gauge cluster color LCD information screen and steering wheel controls will gladly record your 0-60 mph times along with other performance attributes, such as quarter mile time and braking performance. 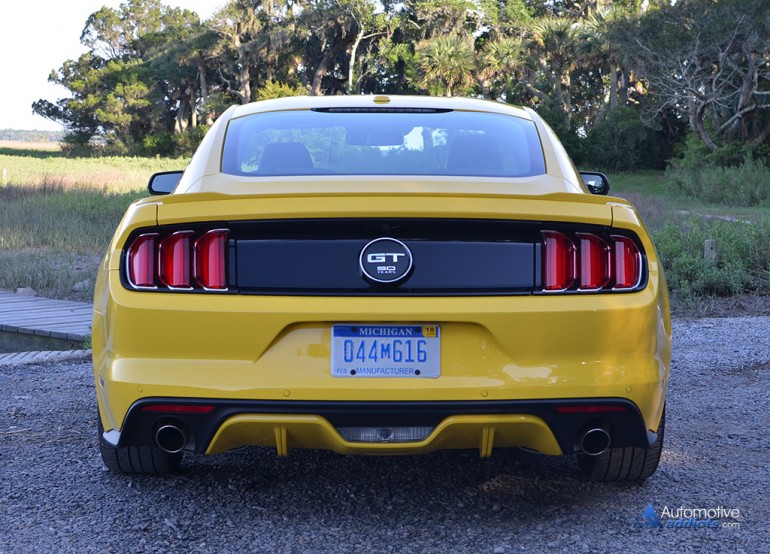 Ride quality of the 2015 Mustang GT was mostly rewarding but left a bit of firmness to be desired. The rear end, not at fault of the independent setup, felt a bit soft and would bounce around a bit much for my taste. It is possible that the GT Performance Package, adding stiffer springs and damper rates, would address this slight misstep. In all, the handling aspects of the new Mustang GT have taken one small step forward instead of a giant leap. That leap may be reserved for the forthcoming Shelby GT350, proving how easy it is to build off of a great foundation in the current Mustang GT. 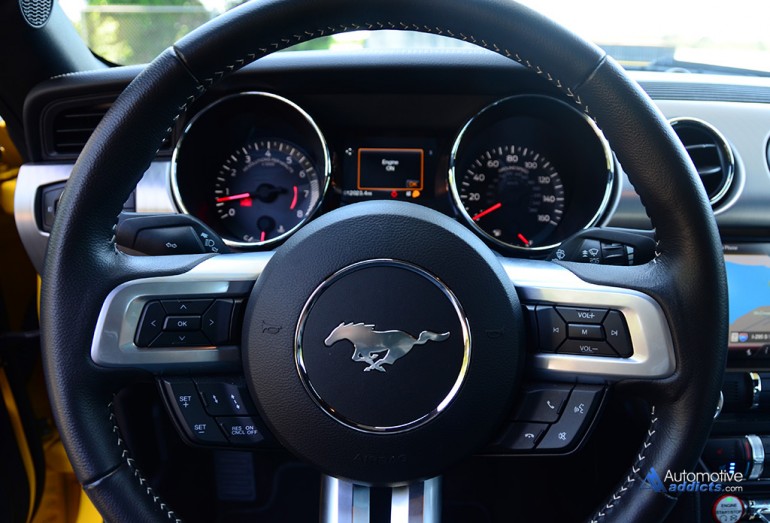 The electric steering rack feel, adjustable in three modes (comfort, normal, sport), felt a bit artificial and slightly disconnected from the road. Again, the optional GT Performance Package has a unique steering calibration, which may change my discernment. Otherwise, the joy of manually rowing your gears made up for those few shortcomings if you opt for the manual in place of the optional 6-speed automatic transmission. 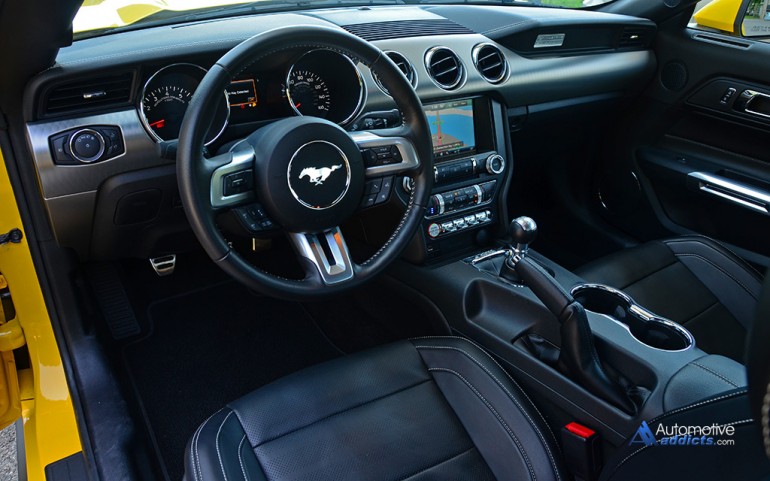 The 2015 Mustang GT’s interior captures an American muscle car feel yet plays on its contrasted stitching and plentiful soft-touch surfaces for a small taste of luxury. Ford has done their homework to provide a nice balance between the sporty attitude and soft plush side of the Mustang. It is almost a situation where the Mustang’s interior is a jack-of-all-trades but master at none. Don’t get me wrong here; the Mustang GT’s cabin has every control and info readout right where it needs to be. The elongated aluminum trim separating padded dashboard from the center stack and glove box harmonize the interior’s flare but it is somewhat lost in translation with the monotone black theme of my test vehicle. Maybe it’s an acquired taste for me; as for others they will easily be grateful to see the Mustang’s cabin receive an over-all improvement.

The seating positions are optimal with a power seat control for the seat bottom but a manual control for the seat back adjustment. Seat comfort is pretty good with just enough bolstering in the 50 Years-embroidered heated and cooled seats. The seat cooling was found to be among the best I have experienced, as it seemed to take air-conditioned air and feed it through the leather seat perforations instead of just recalculated air by an internal fan that you get on normal ‘ventilated’ seats. The “cooled” seats are truly something enjoyed in our hot and humid conditions here in Jacksonville, FL. 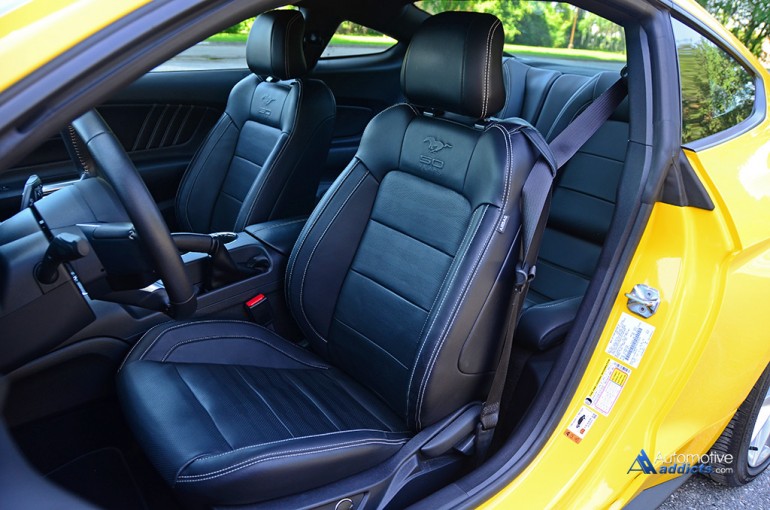 The feature content on a Mustang has never been so plentiful as it is on the new 2015 model. My Mustang GT 50th Anniversary Edition was equipped with many desirable options, such as adaptive cruse control, blind spot monitor, 19-inch wheels with 255/40/19R W-rated tires on all four corners, a 12-speaker Shaker audio system, and voice-activated GPS navigation fed through the unwieldy Sync infotainment system. The Sync infotainment system, virtually the same unit found on other properly equipped Ford and Lincoln vehicles, retains its mild hiccups with a few lagging screens and inconsistently responding controls. However, after not expecting much swiftness from the system, it eventually becomes quite enjoyable for controlling the audio, navigation, Bluetooth integration and climate settings.

The Ford Mustang has always been a value proposition for such a performance car, and the 2015 model year isn’t any different. You would be hard pressed to beat the offer of 435-horsepower at the GT’s base price. With a decently loaded vehicle in my 2015 Mustang GT 50th Anniversary Edition, the as-tested price lands at $43,490 including an $825 destination and delivery charge. Considering the Mustang GT starts at $32,100, the nearly-loaded 50th Anniversary Edition, comes at a respectable price point. 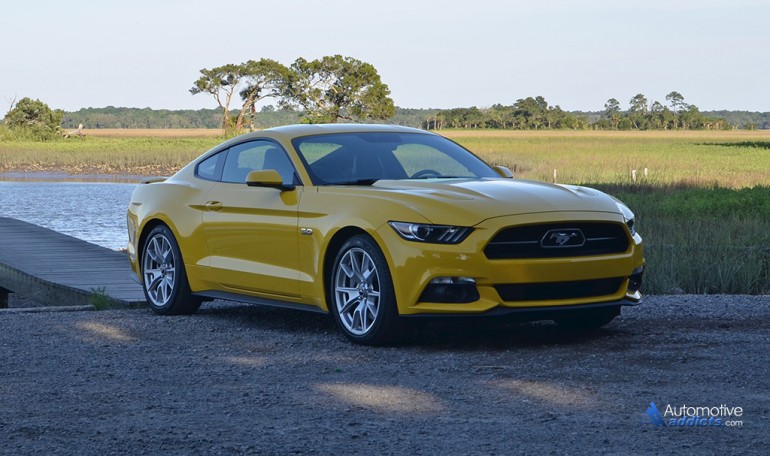 The Ford Mustang is better than ever and the 5.0-liter V8 GT brings exactly what muscle car enthusiasts want in the modern-day pony car platform. The new Ford Mustang GT remains to be quite capable of “more,” which can easily be built upon to appease hardcore enthusiasts with an endless supply of aftermarket bolt-ons and modifications.

With all that said, bring on the Shelby GT350!