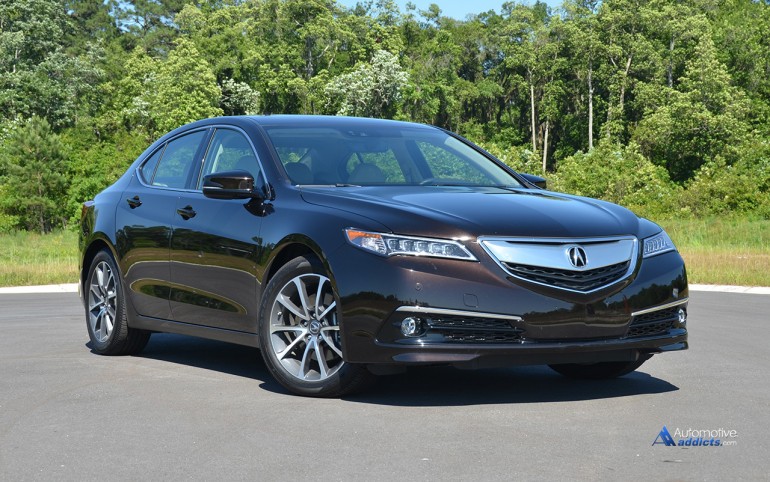 I have always lauded the Acura TL. I can remember when the Acura TL made a lasting impression on me as a 2004 model. I was sure at the time that the Acura literally manually-shifted into high gear and created a modernized rendition of an enthusiast’s Japanese-luxury-branded midsized sedan. Many felt my sentiments as well; the sales stats over the TL’s third generation years will confirm this. Now, looking back just over 10 years, Acura has enveloped customer feedback with today’s technology and forward-thinking engineering, and birthed a TL replacement as their best entry-level-luxury midsized sedan yet, the new TLX. 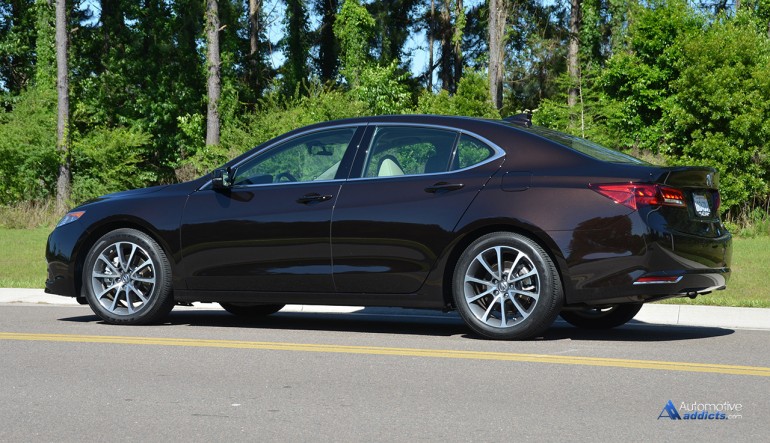 As a follow-up to our initial impressions of the new-for 2015 Acura TLX, we embark on a long drive for a few hundred miles putting the TLX through its paces. Upon our initial view of the TLX, it was a bit confusing in looking at its smaller distant proportions. After jumping behind the wheel we knew what the TLX was all about and those slightly smaller proportions were then acknowledged. In our view, Acura put the TL on a diet and finely sculpted many aspects that needed work to put their prided midsized vehicle back into perspective. In that, the TLX captures where the TSX and TL left off forming a single vehicle. Those combined parts make the TLX a fine vehicle for its disposition in a competitive entry-level luxury sedan market. 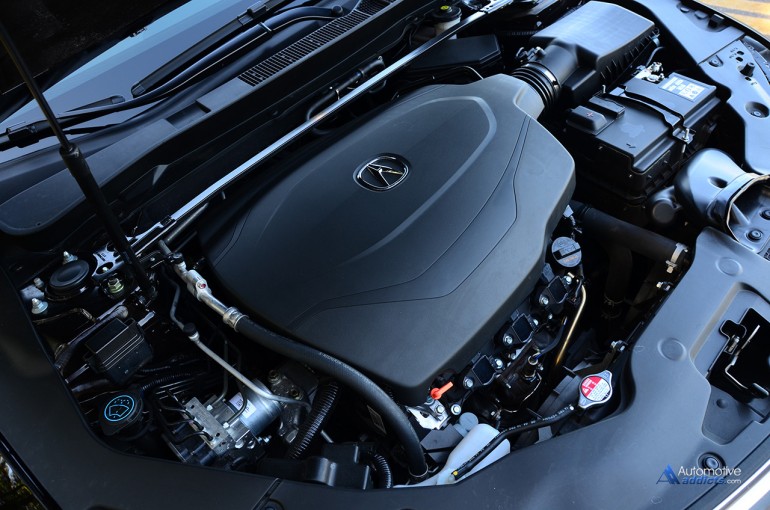 Powered by Acura’s latest iteration of their 3.5-liter V6, the TLX in its V6 trim levels produce 290 horsepower and 267 lb-ft of torque directed through a 9-speed automatic transmission. With our test vehicle being the top tier TLX with Advance Package, we were sure in for a treat with the SH-AWD (Super Handling All Wheel Drive) system and its active safety tech.

The driving dynamics of the new Acura TLX in its V6 SH-AWD w/Advance Package trim were in a league of its own. The luxury sedan handles surprisingly well. I say that, because, my initial impression of the TLX is that it would be a soft pushover that when flogged to its limits it wouldn’t bite back with a fight. In my driving adventures with the TLX, it bit back, the SH-AWD system proved to power out of turns without any drama or wheel spin while the 9-speed automatic delectably blipped through each forward gear in a pleasurable style. Most of the caveats associated with a transmission with so many gears were absent from the TLX. The 9-speed automatic flowed into each gear without hiccups and the downshifts upon instant full-throttle demands were shockingly quick. The step-down of the transmission took place in split-second increments while a full-on downshift to 2nd or 3rd gear under demanding situations while cruising in 8th or 9th gear were chalked up as being quite suitable in my book.

Use of the new push-button shifter took a bit to get used to but made sense in opening up the cabin. Making a dash to 60 mph takes just 6.4 seconds, nearly on par for its wide spectrum of considered competition.

The suspension tuning of the new 2015 Acura TLX proves to be a well sorted arrangement. With a spring and damper setup pitted towards a sporty character, the TLX remains stable at all legal speeds and slightly beyond. Through the use of multiphase dampers, the TLX has an ability to smooth out road imperfections without giving up its nimbleness. In all, the suspension setup is among the best for a system that does not have active dampening for a midsized luxury sedan of its 3,770 pound stature. 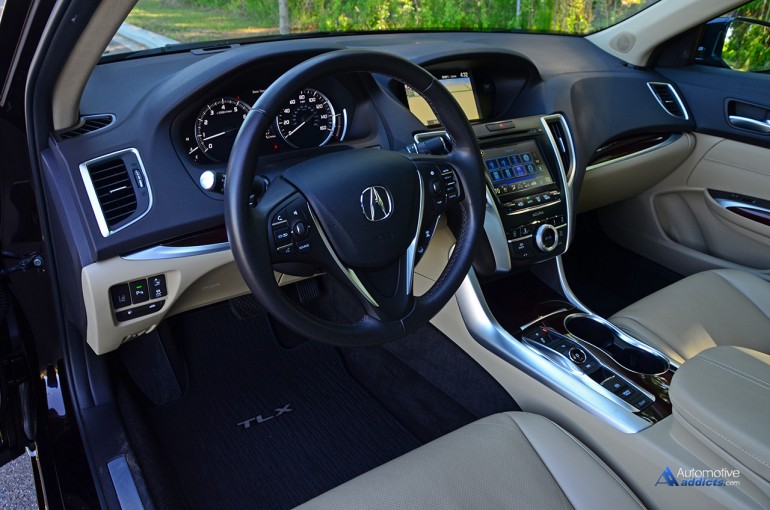 The interior of the 2015 Acura TLX has an excellent fit and finish exuding a nice class of luxury appeal. The sparingly placed wood trim outlined with bright accents, are all tasteful in the theme of the TLX’s cabin. Most of the surfaces throughout are soft touch with limited plastic surfaces, which are mostly coated to limit impressions of cheapness. The seating positions are easily obtained through the 8-way power adjustable perforated leather seats up front. The automatic heated and cooled seats, part of the Advance Package trim level, offer up a nice balance of comfort and support with minimal bolstering but good shoulder support. Seating room up front decently proportioned. Out back the seating area has slightly shrunk from the outgoing TL but remains quite usable for 3 normal-sized adults. Despite the overall volume, the interior doesn’t take much away from Acura’s willingness to captivate a large array of entry-level luxury seekers. 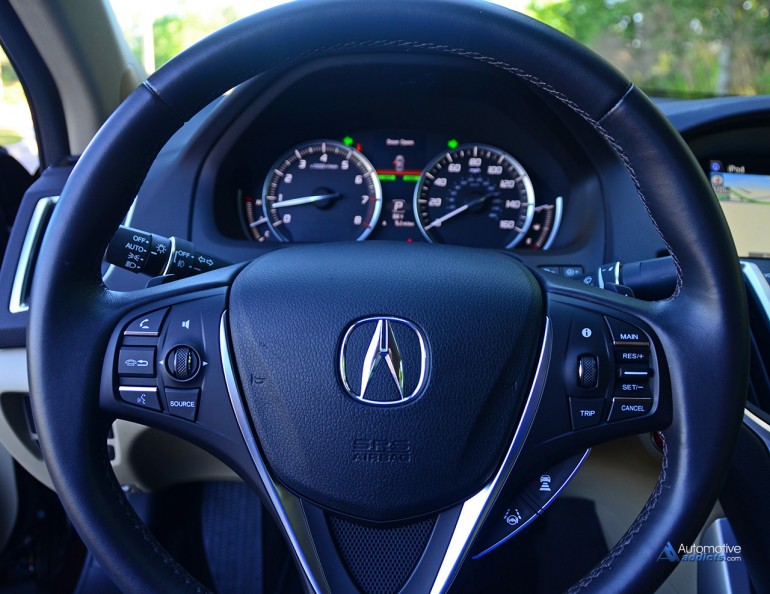 It is funny to say, the Acura TLX with its advanced tech can easily drive itself, which it does in a way, on properly painted roads. With adaptive cruise and lane keep assist activated through the steering wheel button, the TLX will stay in its lane delicately nudging the steering wheel to follow the painted road lines, while the adaptive cruse control keeps at the set speed and desired distance from the vehicle in front all the way to a full stop. Of course, you will be required to keep your hands on the wheel as the system will kindly remind you when it senses no steering input after a few seconds of driving. 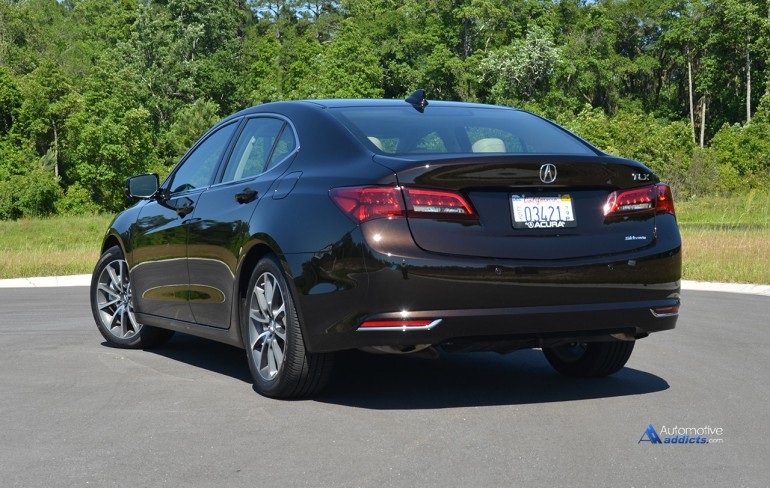 On the economical side of the new Acura TLX, it attempts to fills its power gap among its competition with decent mpg figures getting 21 mpg city, 31 mpg highway, and 25 mpg combined for the V6 SH-AWD setup. Settling on the mid-range trimmed TLX in a front-wheel-drive configuration and precision a all-wheel-steer system (P-AWS), you will yield 21 mpg city and 34 mpg highway. Mind you, the base TLX with its 2.4-liter direct injection 4-cylinder engine producing 206 horsepower and 182 lb-ft of torque through an 8-speed automated dual-clutch transmission, gets 24 mpg city and 35 mpg highway. Astonishingly, on my long out-of-town trip consisting of mostly interstate travels, I averaged nearly 33 mpg on my complete highway portion of the trip. Around the city, thanks to the somewhat brash idle stop (start-stop) system, I also averaged a slightly better consumption number than the EPA estimates, getting about 22.6 mpg. 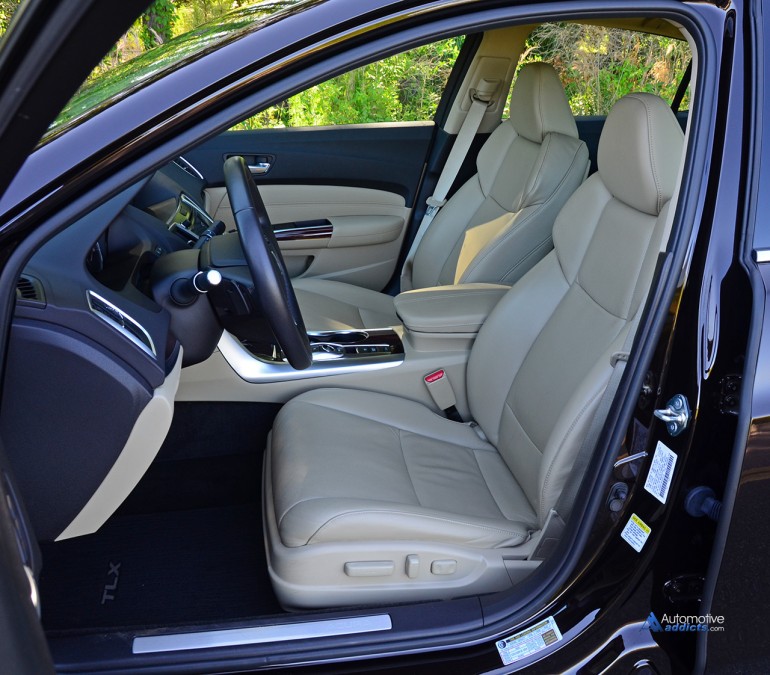 Use of the idle stop system proved to be punishing on the drivetrain with a rough transition of power upon restart of the engine. Getting things going again after a stop of the engine at a red light or stop sign seemed to be at fault of the transmission not smoothly transitioning power to the wheels. Basically, the start-stop of the new TLX, though somewhat effective for conserving fuel and keeping all accessory-powered equipment running upon an engine stop, is lumpy and could use a bit of polishing. 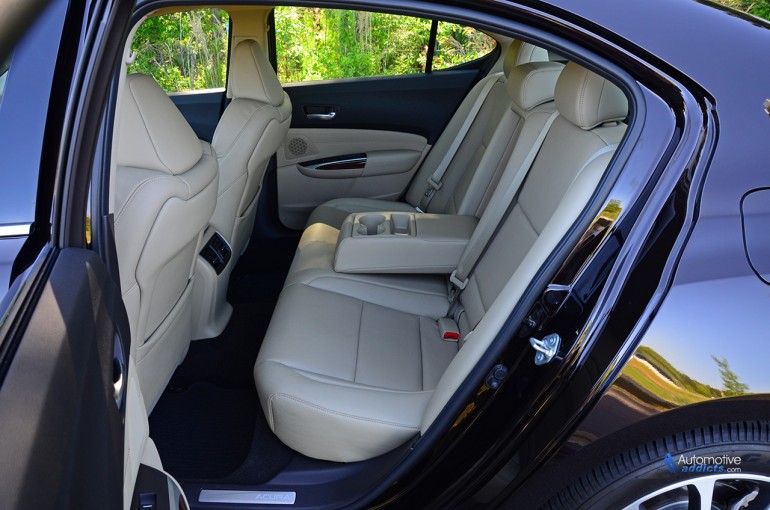 My other faults with the new 2015 Acura TLX, mostly a short list, conclude with the control of the infotainment system. I happen to like the close-proximity secondary screen acting as the primary touchscreen interface. However, the use of the rotary dial on the dashboard is a bit out of place and can be frustrating. On the flip side, when the touch screen permits use to replace the function of the rotary dial in some rare menu and feature sets, the user-friendliness shines brightly. Additionally, the learning curve for becoming acclimated to the system is kept relatively short, which is a good thing considering the blue color scheme of many faded-gradient icons can be a slight distraction to your driving in trying to decipher each icon and on-screen control’s meaning.

Acura’s willingness to do something a little different in their offering for an entry-level luxury midsized sedan is paying off for the sum of what the new TLX is all about. With a wide array of trim offerings and their designated feature sets included in each, Acura ultimately limits the guessing game for consumers. This can be a deterrent for some, but at the same time, many will enjoy the easy selection process of choosing between pre-packaged vehicles where the options are grouped together as opposed to the potential runaway price structure found in many of its competitor’s a-la-carte offerings. 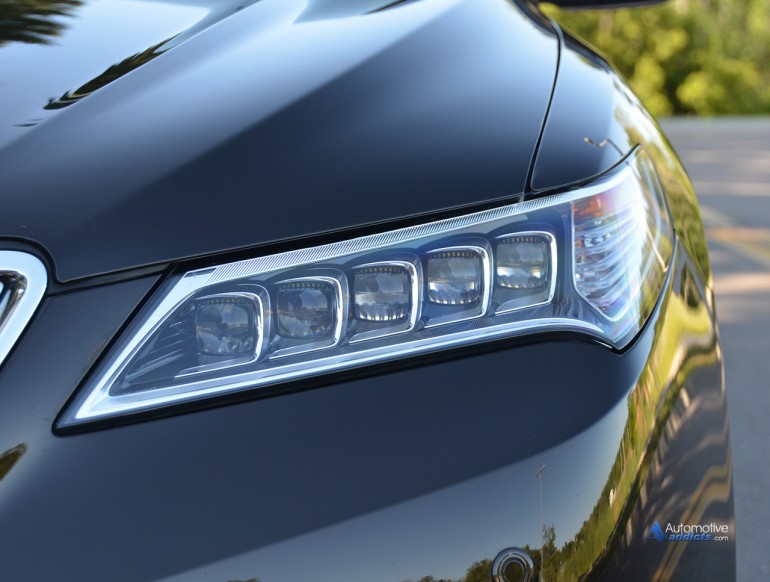 At the value perspective, the new TLX is an attractive buying proposition for a midsized luxury sedan. With a starting price of just $31,445 for the 4-cylinder variant and then tipping the price scale at $44,800 for my loaded-up TLX Advanced Package test vehicle, there is not much to protest. Acura has done their homework and excelled, not only making a passing grade, but they are on the honor roll with the all-new 2015 Acura TLX.