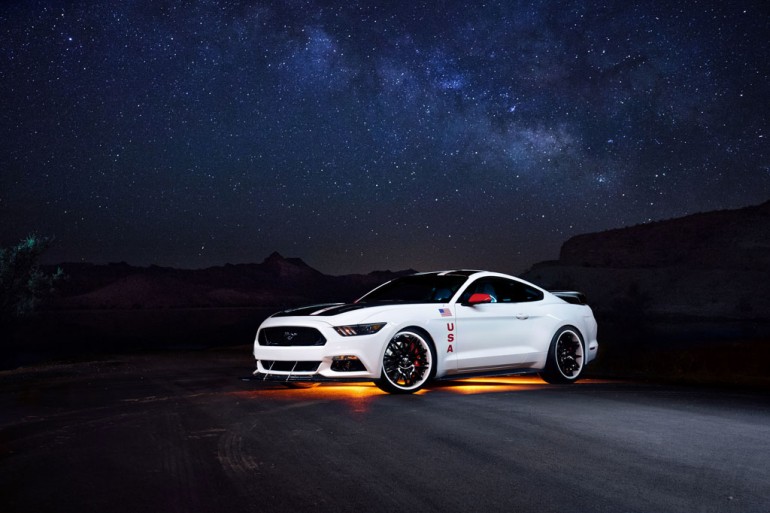 My recent visit to Kennedy Space Center reminded me of how great it is to live in America where we don’t back down at any anything and we thrive to be the best in the world going places that no one else has dared. That same feeling comes around when I strap behind the wheel of an American muscle car, which I get to do often and enjoy unprecedented horsepower figures to come off of the local assembly lines. Ford has been in the muscle car game for as long as cars have been around. To celebrate the innovation and inspiration of our amazing Apollo missions, Ford announce an Apollo Edition Mustang – for charity. 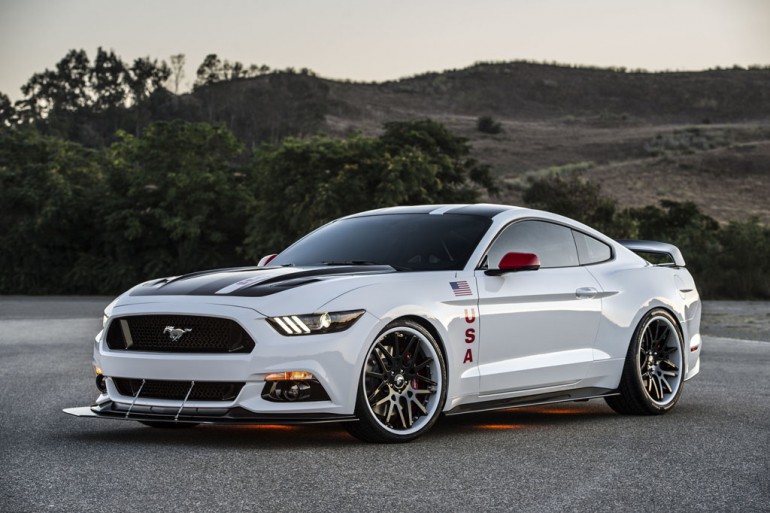 The Apollo Edition Mustang will be donated and sold via auction at the Gathering of Eagles charity event, July 23, at EAA AirVenture Oshkosh 2015 – the World’s Greatest Aviation Celebration. 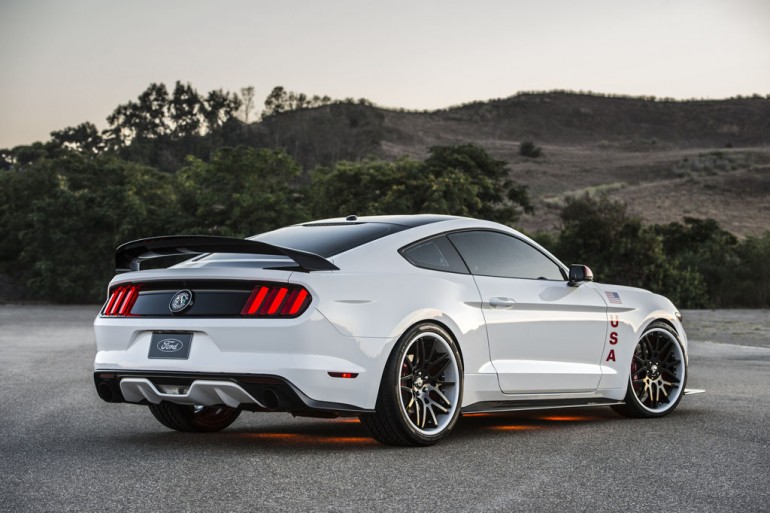 All proceeds from the sale of the car will benefit EAA youth education programs, including the Young Eagles, which has provided free introductory flights to more than 1.9 million young people since 1992, helping grow the next generation of aviators. 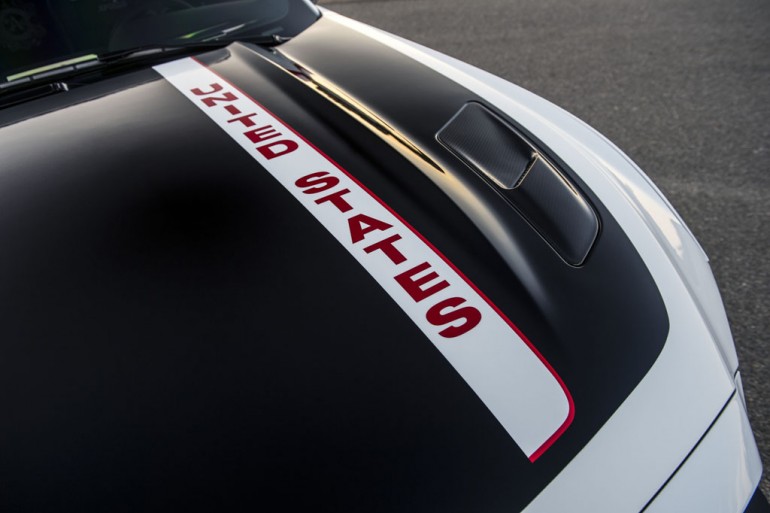 The Apollo Edition Ford Mustang features its 5.0-liter V8 only supercharged to the tune of  627 horsepower and 540 pound-feet of torque. It also gets a set of six-piston Brembo calipers and 21-inch custom wheels with some AMERICAN style. 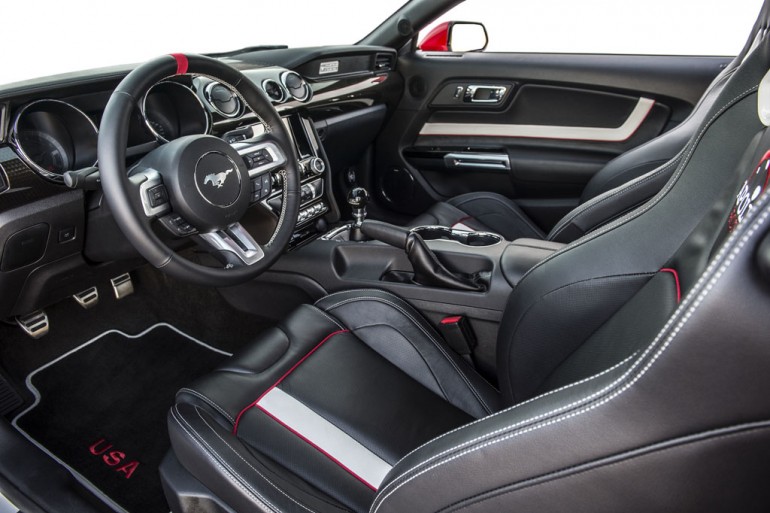 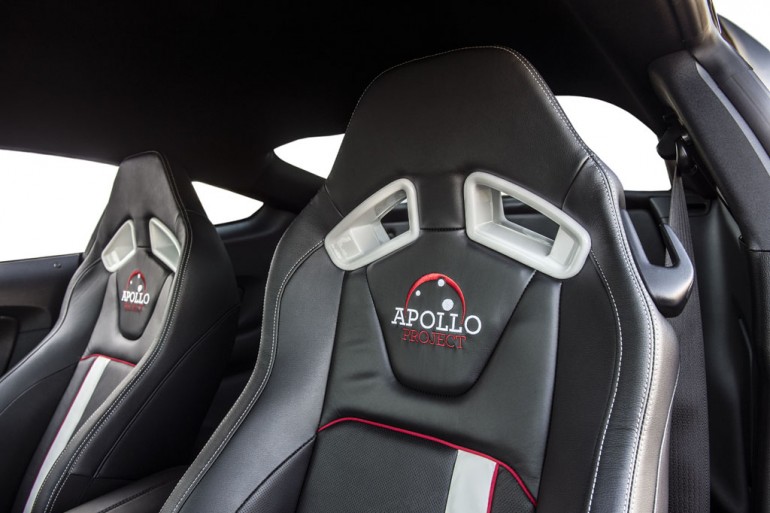 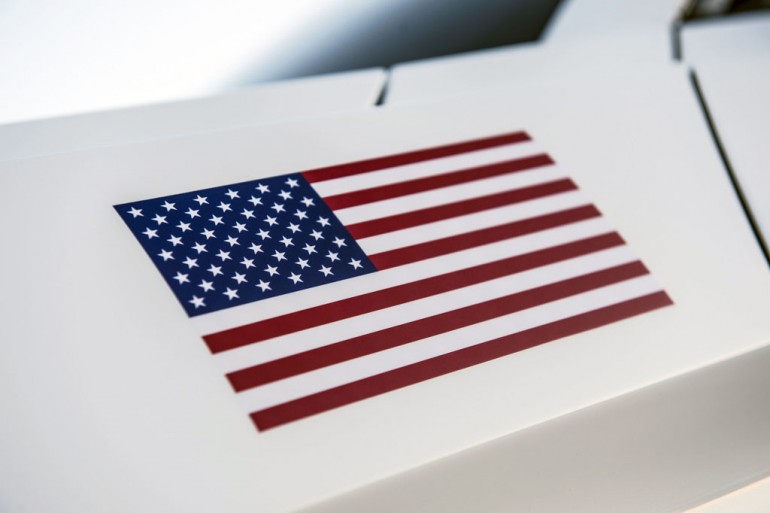 As far as special edition Mustangs go, this one is out of this world.

For the eighth straight year, Ford Motor Company has created a unique, aviation-inspired Ford Mustang to benefit Experimental Aircraft Association youth education programs, including the Young Eagles. The Apollo Edition Mustang will be donated and sold via auction at the Gathering of Eagles charity event, July 23, at EAA AirVenture Oshkosh 2015 – the World’s Greatest Aviation Celebration.

All proceeds from the sale of the car will benefit EAA youth education programs, including the Young Eagles, which has provided free introductory flights to more than 1.9 million young people since 1992, helping grow the next generation of aviators.

“The Apollo program delivered astonishing innovations in technology and achieved a national goal of landing the first human on the moon,” said Edsel B. Ford II, a member of the Ford board of directors. “The entire program was extraordinary – one of our nation’s greatest technological achievements. With this year’s stunning Apollo Edition Mustang, we salute that spirit of American ingenuity with the quintessential American automobile – Ford Mustang.”

Based on a 2015 fastback Ford Mustang GT, Ford design and engineering teams transformed the 5.0-liter pony car into the Apollo Edition Mustang – a truly unique and highly valued vehicle that will excite enthusiasts and collectors alike.

Performance enhancements include a performance package, Ford Performance supercharger and shifter, X-pipe with side and rear exhaust, sport-tuned suspension, six-piston Brembo brakes and custom Forgiato 21-inch performance wheels. This Mustang will deliver a heart-pounding 627 horsepower and 540 lb.-ft. of torque to provide an exhilarating, controlled launch for its new owner.

The auction of the Apollo Edition Mustang will be the pinnacle of the EAA Gathering of Eagles gala. The event annually draws more than 1,000 aviation enthusiasts in support of EAA youth education programs, which inspire young people to become engineers, aviators, astronauts, scientists and innovators – the aviation pioneers of tomorrow.

“Ford has been a committed sponsor of EAA and AirVenture for more than 15 years – bringing incredible value to those who make Oshkosh the highlight of their aviation year,” said Jack Pelton, EAA chairman of the board. “With its eighth Mustang donation, Ford continues to excite with its specialty vehicles, which reflect the depth of the company’s commitment and which allow EAA to provide support to its valuable programs and dedicated members in helping us grow the next generation of aviators.”

The unique vehicles that support EAA youth education programs including Young Eagles, are:

The Apollo Edition Mustang will proudly be on display all week in the Ford hangar at EAA AirVenture Oshkosh 2015. To participate in the auction, interested parties must prequalify by contacting the EAA development office, (800) 236-1025 or [email protected].

To stay apprised of all Ford EAA AirVenture news, connect with the Ford team on Twitter atwww.twitter.com/FordAirventure or visit www.FordAirventure.com.