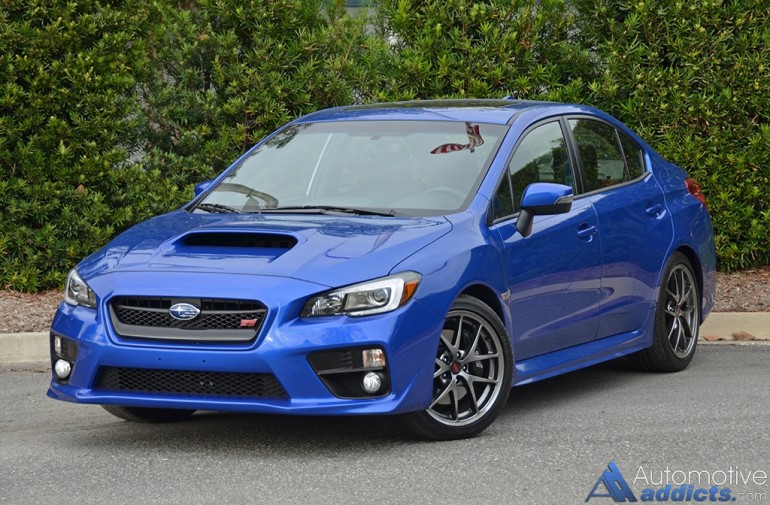 Subaru’s WRX has always been on the radar screens of enthusiasts, and rightfully so considering its performance-oriented all-wheel-drive, turbocharged, handling-on-rails attitude. Taking things a step farther is the WRX STI pitting the best of what the Subaru lineup has to offer for power output and overall performance. Taking its historic roots from rally championships, the Subaru WRX STI continues on for the 2016 model year after its redesign in 2015 remaining mostly unchanged, except for a welcomed updated touchscreen infotainment unit with smartphone app integration on all trim levels. 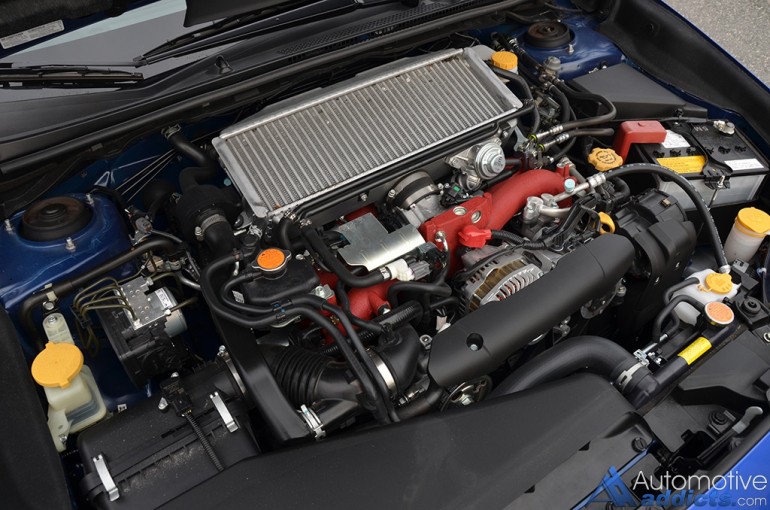 Getting into the meat of things, my 2016 Subaru WRX STI Limited test vehicle, virtually the Subaru’s Fastest Tested On Track: BRZ, 2016 WRX, STI Driven back in May of this year, captures the essence of Subaru’s enthused DNA with only the availability of a 6-speed manual transmission. Power is directed to all four wheels through front and rear limited slip differentials, which get driver-selectable modes for the center differential. Power comes by the way of Subaru’s long-touted 2.5-liter turbocharged and intercooled boxer (horizontally opposed) 4-cylinder.

What has been a familiar part of the WRX STI line for two generations now, continues to produce 305 horsepower and 290 lb-ft of torque. The collective of parts in the hands of an experienced driver will hit 60 mph in about 4.6 seconds. Hitting this time or better, oddly enough, requires revving to about 6,400 rpm and dumping the clutch with traction control disabled. Don’t worry, the WRX STI hooks up after a split second of wheel spin and 1st gear goes by in a flash as you row into third gear. No harm no foul, just a quick zip to 60 mph. 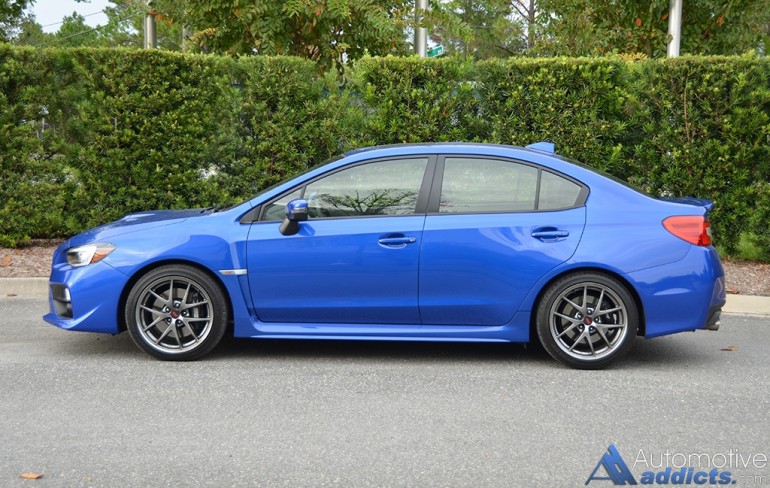 The drivability of the WRX STI resides within its tight suspension, on-rails handling, short and quick transmission throws through a slender shift gate, and a narrow power band that requires a third gear shift to reach 60 mph.

The involvement it takes to pilot the WRX STI will not permit any indecisiveness, A rather quick-thinking attitude is mostly required to keep the momentum moving in the right direction. The tight suspension proves the WRX STI’s willingness to fight back when tossed around but can be a bit much in everyday driving situations with unwanted bounciness and jarring rebounds going over road imperfections and bumps. 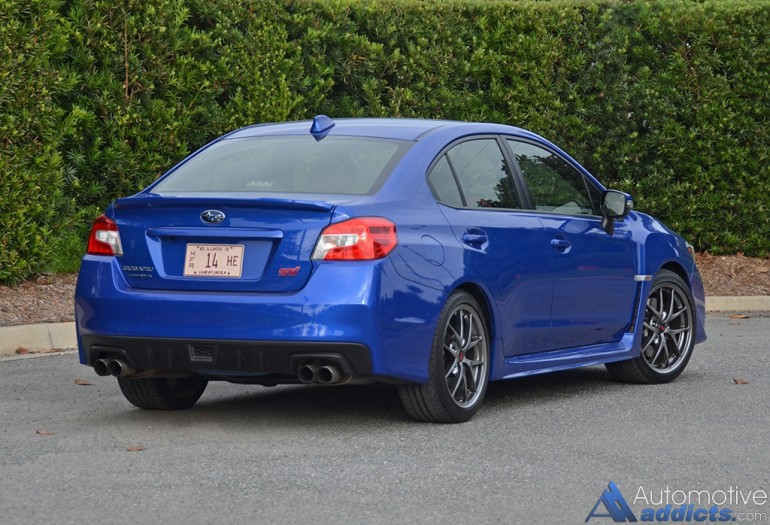 Adding back to the comfort formula is left to the Subaru WRX STI’s interior, which was pleasantly updated during its 2015 Subaru WRX STI Review & Test Drive. The new 2016 model retains that softer side with a few soft touch areas on the door trim where it matters and a soft-touch dashboard. The front perforated and heated leather bucket seats on my WRX STI Limited trim are not only visually sporty, but have just enough bolstering to keep you in place when exploiting the WRX STI’s on-rail-like handling abilities.

Keeping the theme of the Subaru WRX STI’s performance attitude, are the Brembo 4-pistion brake calipers up front and two piston rears to bring the 3,419 pounds to a rest from 60 mph in just 106 feet. The quick steering rack retains its hydraulic assist with a welcomed weighted feeling that doesn’t take away from its sharpness. The fuel economy of the 2016 Subaru WRX STI remains somewhat dismal getting frowned-upon EPA estimate of 17 mpg city, 23 mpg highway, and 17 mpg combined. I found times where I could muster out about 24 mpg on the interstate but with such a fun and eager chassis in the WRX STI, rowing the 6-speed manual into lower gears got the best of me and I managed about 19.9 mpg on a trip to a neighboring city. Filling up the 15.9 gallon tank of premium unleaded wasn’t so much of a daunting task in knowing how much fun the Subaru WRX STI can be, not to mention gas prices are still coming down. 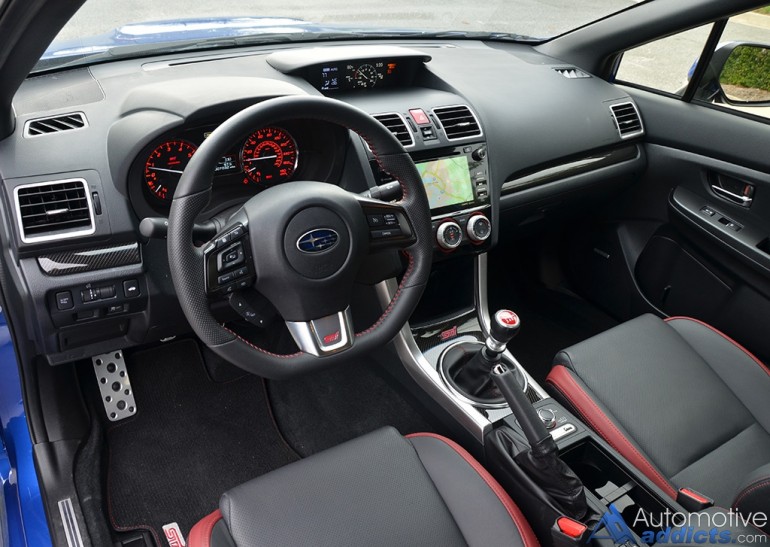 Many of the dashboard controls are simplistic while the updated infotainment touch screen is a welcomed addition for the 2016 model year featuring menu sets that are the most user-friendly from Subaru yet. Gone are the cumbersome and confusing EQ audio adjustments while the simple nature of each feature set keeps the driver and passenger satisfied when the baritone drone sounds from the turbocharged engine’s quad-tipped exhaust aren’t enough. 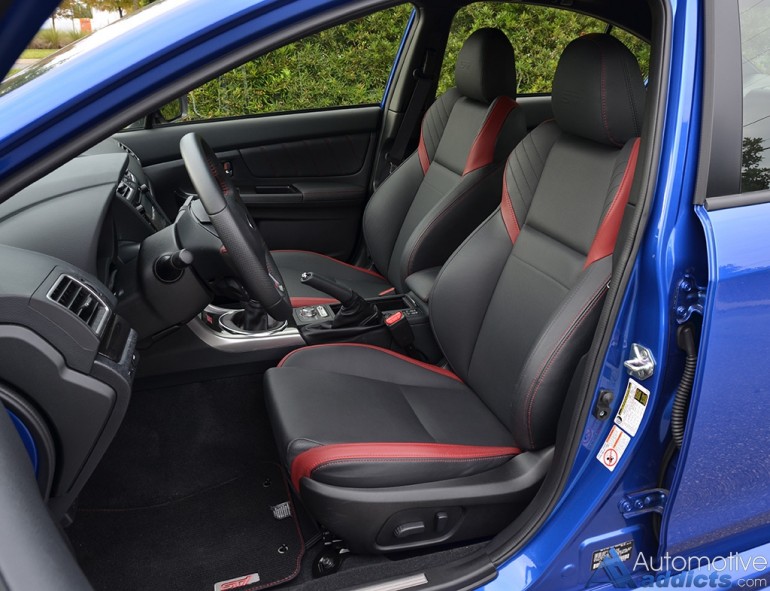 The exterior styling is retained from the 2015 model year rework for my 2016 WRX STI. Though, WRX STI buyers have a choice of the massive bench-seat-proportioned rear spoiler or a new nearly form-fitting rear deck lid spoiler. It’s a good thing, too, for two reasons: that boy-racer look is toned down a bit and its no more mistaken a quick glance in the rearview mirror thinking you have an uninvited tailgater due to the massively-sized spoiler option. 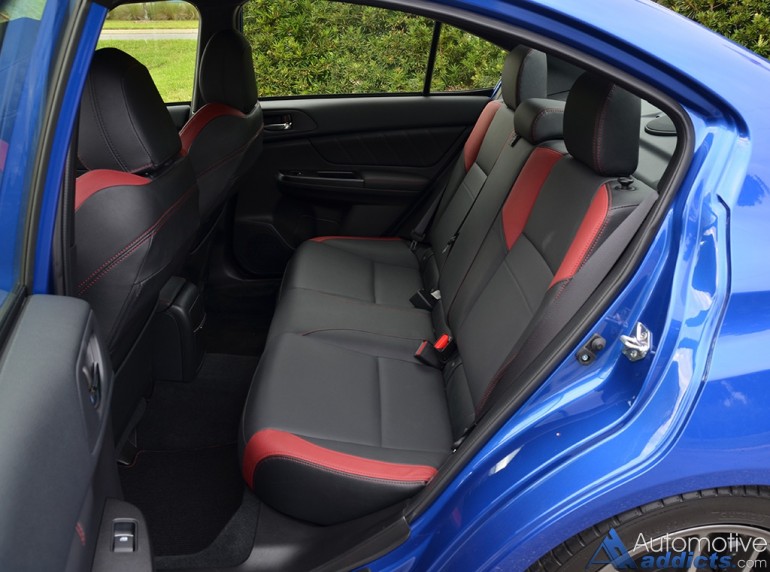 While many of the advanced and active safety features of Subaru vehicles are reserved for everything except the WRX STI, the 2016 model has an option package as part of the Limited trim including a blind spot monitor along with keyless ignition and pushbutton start, sunroof, rear cross-traffic alert, and a 440-watt Harmon Kardon premium audio system with navigation fed through the 7-inch touch screen. Outside of the middle-positioned Limited trim is a new Series Hyper Blue package, essentially a Limited trim with special exterior paint and trim.