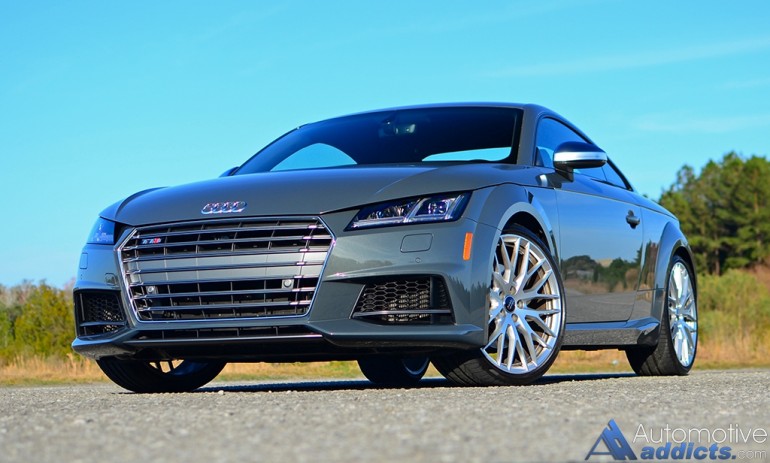 For as long as I can remember, the Audi TT has been an intriguing vehicle that never broke any sales records and was considered by many as an underdog in the full scheme of a very short list of direct competitors. Breaking into a new mold for the third generation, the 2016 Audi TT is in its best position to garner its long desired attention apart from few enthusiasts. Audi TT admirers have been among a small group that truly recognized the TT for its astonishing performance capabilities, especially in its top-performing TTS trim. After spending a week with the new 2016 Audi TTS, I am too admiring the thrill ride that it is, well deserving a closer look by those who may have written off Audi’s exotic-inspired pocket rocket.

>> Get the best price on the Audi TTS from a network of local dealers now. << 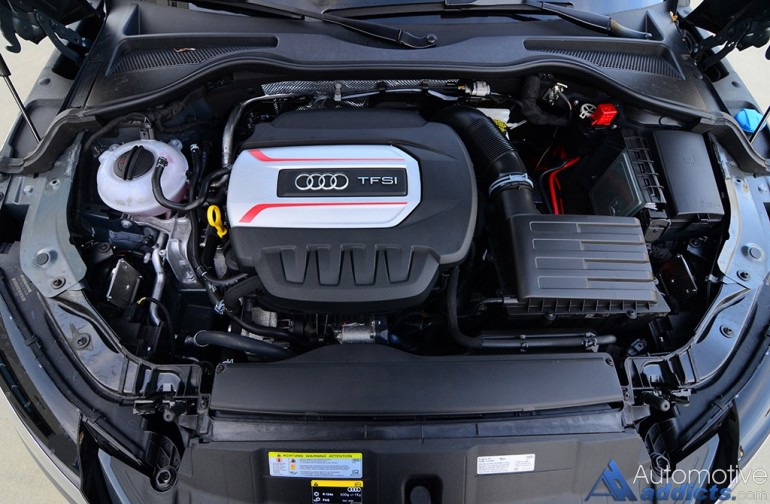 The new 2016 Audi TTS is one of two variations offered apart from the convertible TT and TTS. At its base form, the Audi TT gets a turbocharged 2.0-liter engine good for 220 horsepower. Stepping up to the new Audi TTS the 2.0-liter turbocharged engine is tuned to a remarkable 292 horsepower at a low 5,400 rpm and 280 lb-ft of torque starting at 1,900 rpm. The turbocharged 4-cylinder in the TTS gets mated to the only transmission offering, a new 6-speed S-Tronic automated dual-clutch unit that fires off wastegate-clapping shifts in milliseconds and precise downshifts without unwanted drama. The engine and transmission combination, using Audi’s latest Quattro all-wheel-drive system and magnetic dampers at all four corners, makes the Audi TTS quite the performer. Even so, my Audi TTS test vehicle, equipped with optional 20-inch alloy wheels wrapped in low-profile 255/30/ZR20 Pirelli P Zero summer performance rubber, leaving you with a hooked-on-rails sensation. 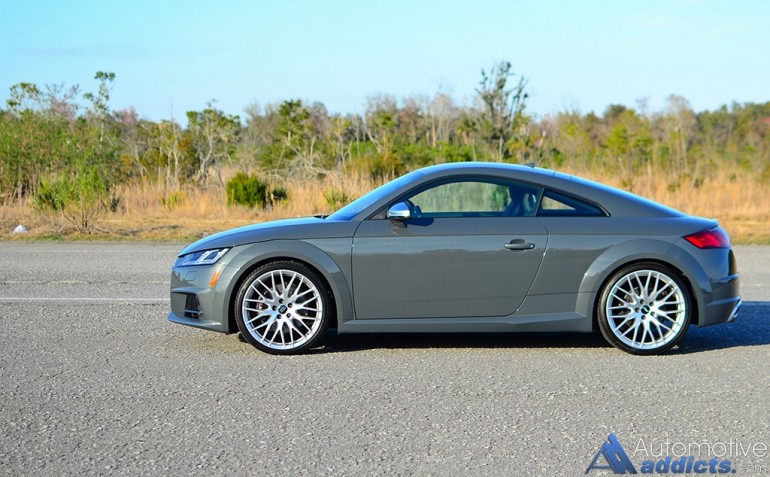 The Audi TTS hardly ever breaks loose on turns, even when powering flat-out from a turn or diving into bends nearly pending ABS intervention. The Audi TTS is sure-footed most of its approach on pavement. The new Audi TTS tips the scale at a modest curb weight of just over 3,200 pounds. At the slight turn of the smallish flat-bottom steering wheel connected to a razor-sharp variable ratio electric steering rack, the TTS feels as if it carves grooves into the pavement as you hold on for dear life. The lateral adaptation of the TTS is remarkable when you consider its collective performance bits, from the adjustable magnetic dampers and 20-inch wheels, to the surging 292-horesepower and 280 lb-ft of torque mated to a snappy-shifting 6-speed dual-clutch transmission, the Audi TTS means business. 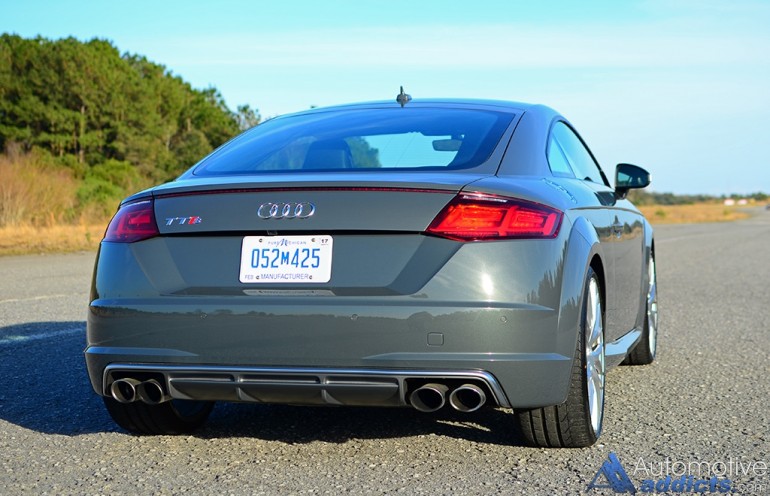 Getting down and dirty with the new Audi TTS puts a rewarding smile on your face especially when all four tires hardly make any noise, to get the job done at the hand of an electronically-monitored Quattro all-wheel-drive system, and a powerful 2.0-liter turbocharged engine. Sixty miles per hour ticks off in just 4.5 seconds by the way of a simplistic launch control that is enabled by placing the drive select mode into Dynamic, disabling stability and traction control, placing your left foot firmly on the brake – right foot on the gas to await a 4,000 rpm rumble, and let your foot off of the brake when you’re ready to fly. There’s no drama, just thrills and smiles. 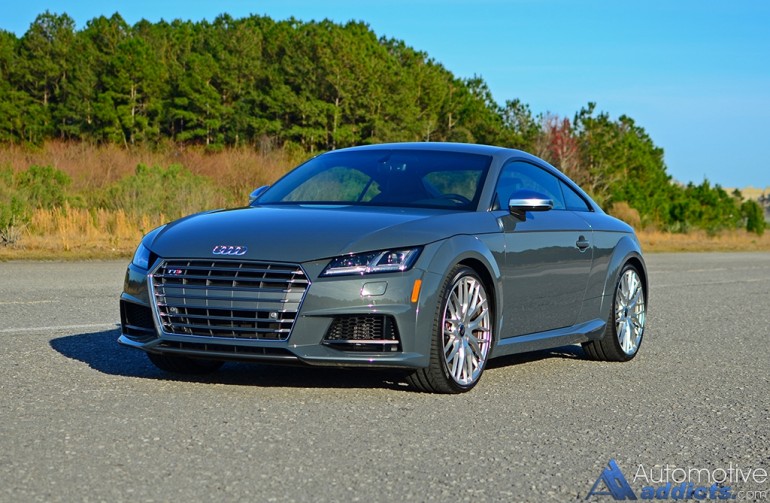 Adding to the complete formula of the new Audi TTS being a complete compact sports car package eager to appease those that use it for daily commutes; the finely-tuned 2.0-liter turbo is respectably efficient for its power output. The 2016 Audi TTS gets an EPA-estimated 23 mpg city and 27 mpg highway. I saw numbers as high as 28.9 mpg on the highway cruising just below the flow of local Interstate traffic. Around town, the Audi TTS wasn’t shy about drinking decent amounts of premium fuel getting just 21 mpg while hooning from stoplight to stoplight. 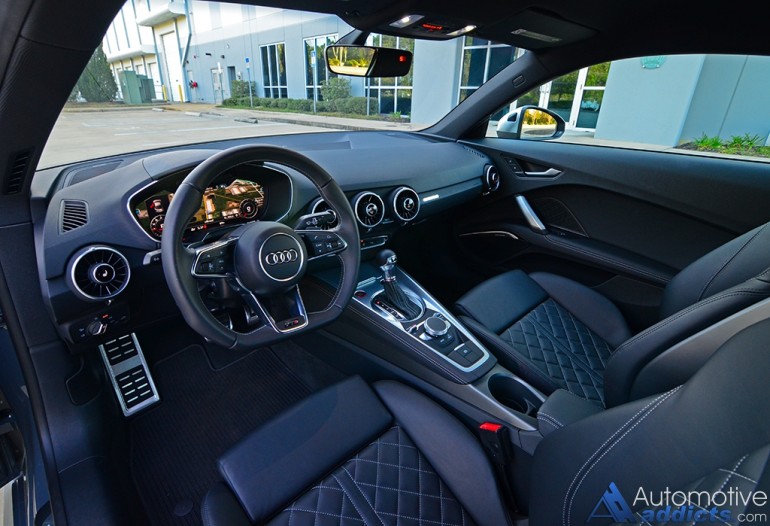 Audi has certainly upped their game in the area of tech and continue to be one of the frontrunners when it comes to innovation. The new 2016 Audi TTS incorporates a taste of the tech found in its more expensive brethren starting with the use of Google maps as part of its landscape-detailed GPS navigation system. Fed through the driver’s rather large and high-resolution 12.3-inch LCD screen cluster, all vehicle information is displayed with the exception of the climate controls. The updated display with a redundancy of controls through Audi’s MMI interface on the floor console and steering wheel buttons take a while to get used to, even for a Computer Science major such as myself. Even though the learning curve for becoming acclimated to Audi’s latest MMI infotainment system can but a bit much for some, once a certain level of familiarity hits you, it then becomes an agreeable combination of control sets that are less distracting than initially perceived. Not everyone is going to like the system. Though, the graphic overlays and large/small gauge view preference settings make for quite the interactive display combining a live Google maps satellite terrain view of local streets, buildings, and landscape for better reference. I’m not entirely sure why other automakers haven’t yet adopted Google maps to help power their GPS systems; it’s the way to go if you ask me. 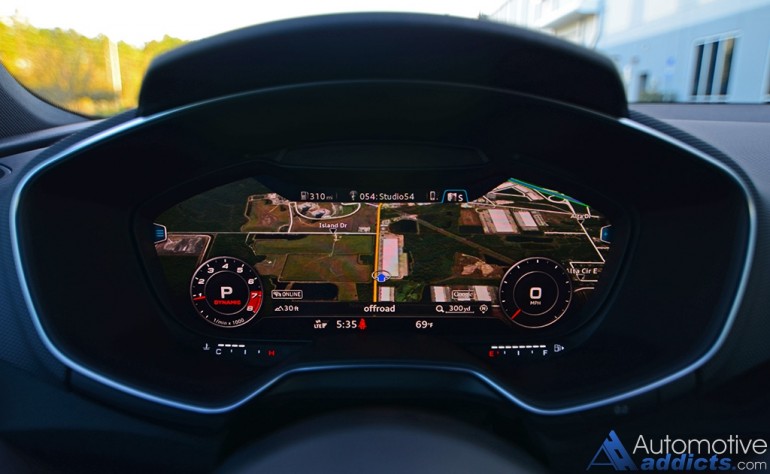 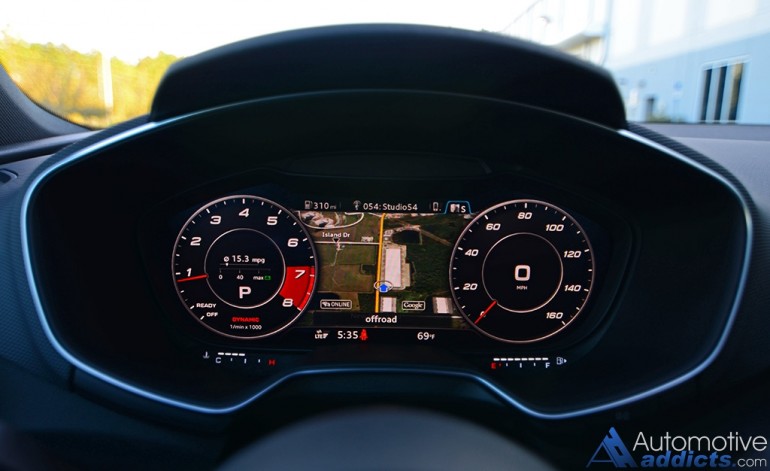 The cabin of the new Audi TTS is laced with several soft touch surfaces, aluminum trim, and comfortable quilted stitched leather inserts on the tightly bolstered front seats. Surprisingly, what most do not realize about the Audi TT and TTS, is that it is a 2+2 seating setup, technically, not a two-seater or one ready to pack in four adults. Though, the rear “two” seats are more for a potential insurance discounts or an appeasement for those who need to haul their extra small-framed friend in a pinch. The rear seats, with their limited legroom (only 28.9 inches) and high-angled seatbacks, are more reserved for extra storage or folding the 50/50 split backs down to add to the standard 12 cubic feet of cargo space through the opening rear hatch. 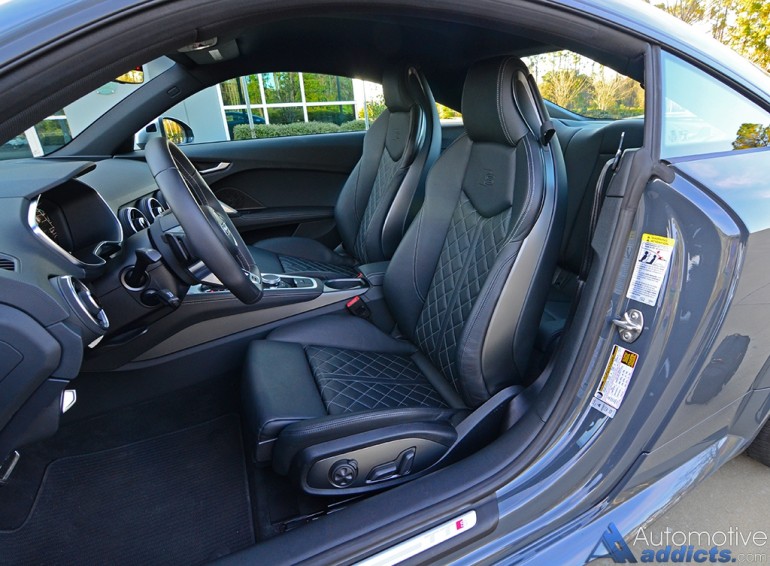 The climate controls and seat heater controls are all uniquely integrated into the round fixed vents, a total of five of them. Each identical vent features its own adjustment, one for vent speed, automatic toggle, recirculation, and heated driver and passenger seat setting. As a resourceful use of the limited cabin space, the climate controls embedded into the vents combined with a sole 12.3-inch gauge cluster information display for the driver’s side makes sense for a moment. At least up until the passenger wants to view the screen to reference their adjustment of the optional delightful-sounding 12-speaker Bang & Olufsen sound system or take the focus off of the driver to enter a new destination on the Google maps-powered GPS navigation system. 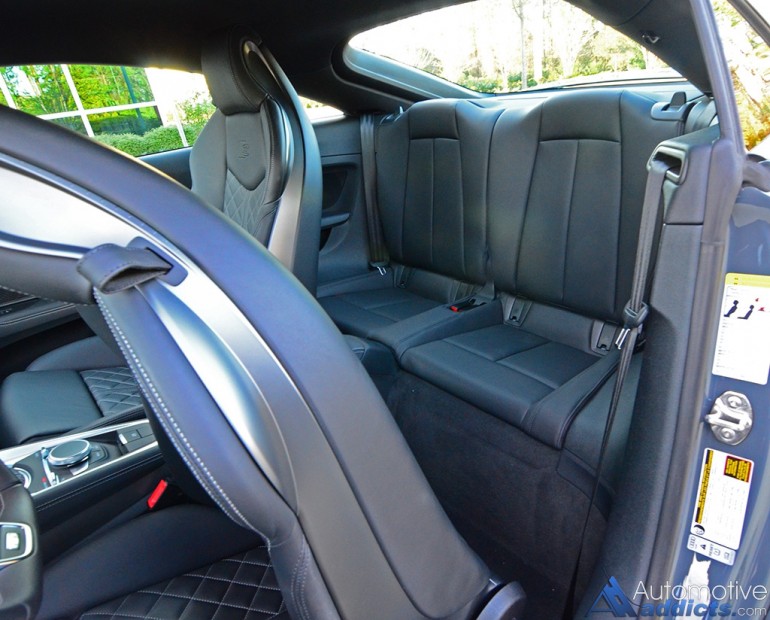 Other notable options equipped on my test vehicle include a Fine Nappa leather interior package and a Technology package, which bundles a parking system plus, rear view camera, heated auto-dimming and power-folding side mirrors with LED indicator lamps, blind spot monitor (Audi side assist), Audi connect, and the MMI navigation plus system.

Audi’s new TTS is undoubtedly a pocket-sized thrill machine. The styling screams mini-R8, which is a good thing to communicate a unique style and design that Audi has done a excellent job retaining over the years. From the unique LED daytime running lights and rear “flowing” LED taillights, to the motorized rear spoiler that automatically raises around 75 mph for added high-speed stability, the Audi TTS is the quintessential exotic pocket rocket. 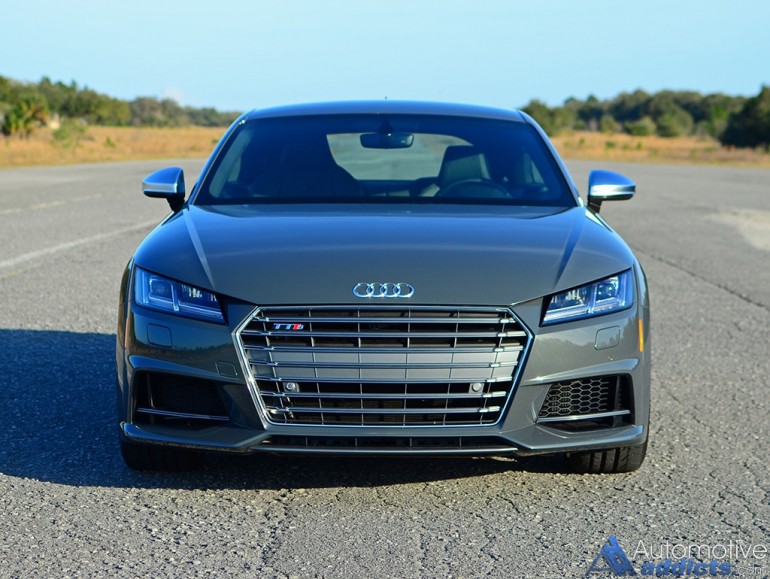 At the sum of what the 2016 Audi TTS offers, the pricing comes at a decent level for a premium sports car even if it is on the smallish side. At a base price of $42,900 for the base Audi TT, and $52,900 starting for the TTS, Audi has placed the feature-rich and on-rails performance compact sports coupe in a position to compete well with its competition. At the high end, my loaded-up Audi TTS test vehicle comes to price of $61,500.

>> Get the best price on the Audi TTS from a network of local dealers now. <<