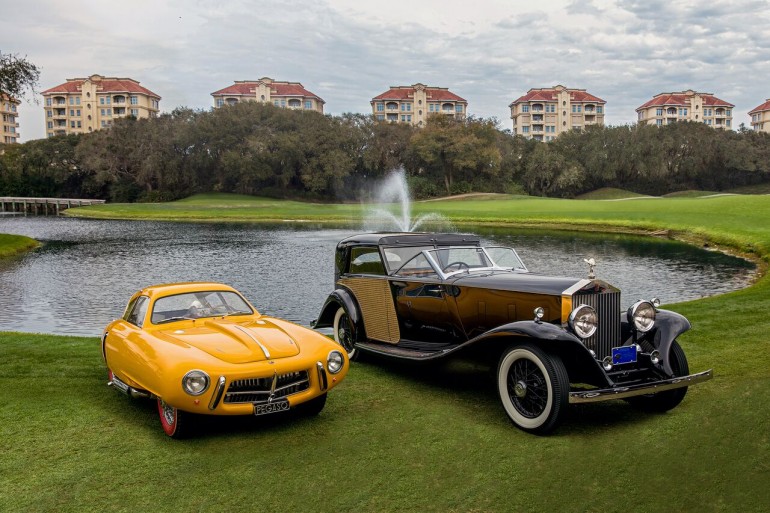 More than 32,000 Enthusiasts Attended the World’s Most Innovative Concours Weekend

Jacksonville, FL (March 16, 2016) – The 1952 Pegaso Z-102 Cupula Coupe and a 1930 Rolls-Royce Phantom II Town Car won the Best In Show honors on Sunday, March 13, at the 21st annual Amelia Island Concours d’Elegance, which attracted more than 32,000 spectators throughout the weekend.

The competition drew 320 cars and motorcycles into 43 classes from 10 different countries to the 10th and 18th Fairways of the Golf Club of Amelia Island.

The striking yellow 1952 Pegaso Z-102, owned by Evert Louwman from The Hague, Netherlands, took home the prestigious Best in Show Concours de Sport Trophy. Fourteen of the rare 85 Pegaso sports cars produced in Spain in the 1950s were gathered for the concours. 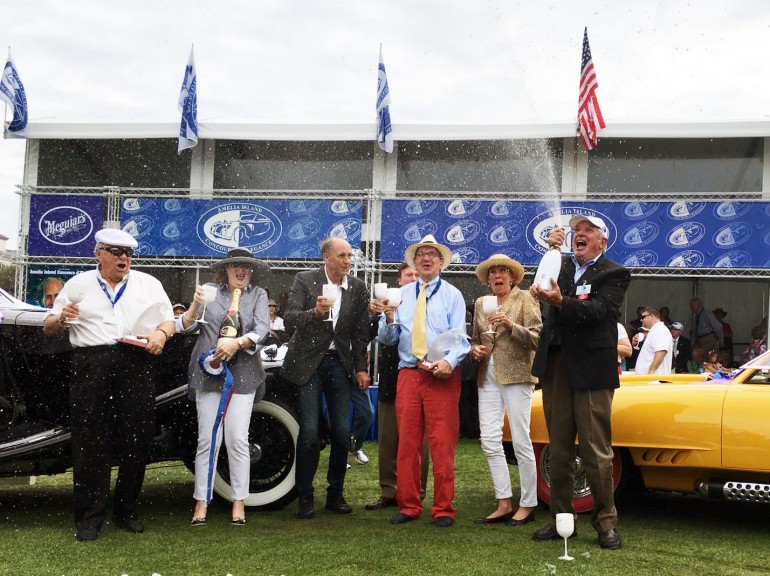 The highly coveted Best in Show Concours d’Elegance Trophy was presented to Helen and Jack Nethercutt from Sylmar, California, for their 1930 Rolls-Royce Phantom II Town Car from the Nethercutt Collection. The spectacular classic with a formal limousine body created by Brewster was once owned by 1930s film star Constance Bennett.

Additional highlights on the field included the presence of the 1949 Buick convertible, one of two used to make the film “Rain Man,” which made its international Concours debut within the event’s “Post War American Production” class, as well as a Porsche 356C 1600 SC that once belonged to American singer/songwriter, Janis Joplin, which served as the centerpiece for the “Porsche 356” class.

This year’s Concours also showcased some of the most ambitious, stylish, and avant-garde concept cars – all developed by companies and/or individuals outside of the major manufacturers in Detroit. Cars in this class were built with an eye toward production but with a passion for innovation, resulting in captivating and sometimes outrageous concepts for public consideration.

The 2016 Amelia Island Concours d’Elegance also included a “Trophy Cars” class, featuring eleven significant competition cars and the famous trophies they won in some of history’s fabled classic races.  The trophy display, which occupied the lobby of The Ritz-Carlton fromThursday through Saturday evening, moved to the field on Sunday to be matched with cars that had won them. This included The Borg-Warner Trophy paired with the Johnny Lightning Special, the Wheeler-Shebler Trophy with the 1909 Buick,  Old Number Ten, the Harley Earl Trophy from Daytona International Speedway with the 1971 Richard Petty Plymouth Road Runner, the 1914 French Grand Prix Trophy with the 1914 Mercedes GP car, the Race of Two Worlds Trophy from Monza with the Jim Rathmann Watson Roadster, the Stevens Trophy with the Cord Beverly Sedan, the Sebring/Alec Ulmann Trophy with the Stirling Moss/Bill Lloyd 1954 OSCA, a replica of the Vanderbilt Cup with the ALCO, the Cannonball Sea- to- Sea Memorial Trophy Dash/Maurice G. Bauer Trophy with the 1975 Cannonball Dino, and two Le Mans Trophies with Ferrari bookends – the 1949 and 1965 trophies with the Ferrari 166MM of Luigi Chinetti and Lord Selsdon  and the Ferrari 250LM of Rindt and Gregory, respectively.

Mercedes-Benz USA displayed a selection of the latest dream cars from its high performance Mercedes-AMG line-up including the G65 and S65 Coupe, both powered by the 621 horsepower 6.0-liter AMG bi-turbo V12 engine, the 7-passenger GLS63, all- new GLE63 S Coupe, S63 Cabriolet, and GT S and C63 S Coupe rounded out the display on the front drive. Journalists also had an exclusive opportunity to drive the all-new 2017 SL roadster in advance of its U.S. launch.

Alfa Romeo presented the 2017 Giulia Quadrifoglio with its class-leading 505 horsepower and all-aluminum Bi-Turbo V6 engine. Also featured were the 2016 4C Coupe and 4C Spider, with test drives offered in the 4C Spider allowing guests to experience its race-inspired performance first-hand.

Lamborghini held the public debut of its Huracan LP 580-2, also known as the brand’s first rear wheel drive road model since the Gallardo LP 560-2.  Celebrating the 50th anniversary of the Miura this year, a selection of six Miura’s were on display, including a model that was one of the first-ever to go through the brands Polo Storico heritage restoration program.

BMW Group Classic celebrated BMW Group’s 100-year anniversary with an exhibition marquee styled on the theme of the birthday slogan “The Next 100 Years,” located on the north fairway of the golf course. The selection of rare vehicles exhibited there started with the BMW 319, which was already empowering the company to enthuse drivers with ambitious sporting objectives in the 1930s.

Buick showcased its dynamic and spirited side with the award-winning Avista concept – a modern expression of the brand’s heritage of beautiful design and sophisticated performance in a 2+2 coupe, and the all-new 2016 Cascada convertible.

Cadillac’s celebration of Sixteen – past, present and future – showcased ingenuity and is about preserving the past while constantly reinventing the future with the 1931 Cadillac V16, 2003 Cadillac Sixteen concept and, in center stage, the first-ever 2016 Cadillac CT6 prestige sedan.

Ford showcased the all-new Ford GT at Amelia Island, one of the halo supercar’s rare appearances outside of a major auto show, and is looking to continue to build excitement as production begins later this year.

Infiniti showcased its all-new 2017 Q60, the 400-horsepower 2016 Q50 Red Sport 400, the new 2016 QX60 and the all-new 2017 QX30.  Jaguar offered participants an opportunity to test drive the dynamic F-TYPE and the all-new XE, built on an aluminum-intensive architecture shared with both the new F-PACE and XF.

McLaren Automotive provided two cars from its past as well as recent releases – the 1968 M8A Can-Am car, raced by Bruce McLaren, Denny Hulme, and Dan Gurney, as well as the latest McLaren supercar, the P1 in Papaya Spark. McLaren also offered exclusive drives in the spectacular McLaren 570S model.

In addition to the full-line model display from Porsche Cars North America, one that included test drives of the yet-to-be released latest-generation 911, the sports car company also provided its 1987 24 Hours of Le Mans winning 962 racecar for Honoree Hans Stuck to drive once again. Direct from the Porsche Museum in Stuttgart, Mr. Stuck made his official entrance onto the Concours field in the car voted “Most Significant Porsche” by AutoWeek Magazine

Double Le Mans 24 Hour winner and 1985 World Sports Car Champion, Hans-Joachim Stuck, served as the 2016 honoree. Stuck’s accomplishments were celebrated with nineteen “Cars of Hans Stuck,” which was anchored by the 1977 Alfa Romeo-powered Brabham BT 45B flown to the Concours by the Museo Storico Alfa Romeo, Arese.

“The Amelia continues to be more than just a Concours each year,” Warner said. “It’s a celebration of the automobile and great racers, designers and engineers of the industry.”

A full list of the 2016 “Best in Class” winners will be made available in the coming days.

Now in its third decade, the Amelia Island Concours d’Elegance is among the top automotive events in the world. Always held the second full weekend in March, “Amelia” draws over 250 rare vehicles from collections around the world to The Golf Club of Amelia Island and The Ritz-Carlton, Amelia Island for a celebration of the automobile like no other. For more information, visit www.ameliaconcours.org or call 904-636-0027.