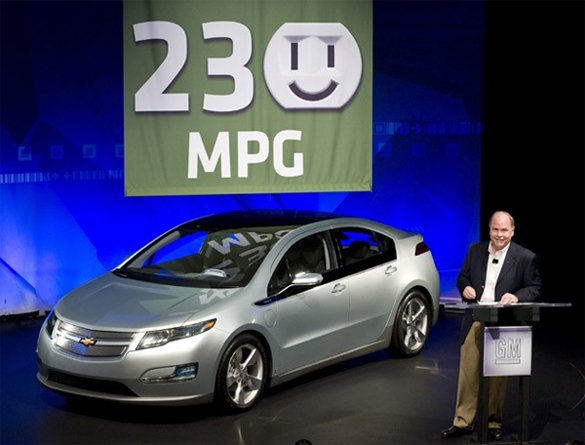 Okay, government General Motors has emerged from bankruptcy as a leaner and meaner operation force happily able to appease the Obama administration and even whoa consumers looking to buy a new car. The “whoa” you are hearing from consumers is a very loud one after the announcement of the Chevy Volt, GM’s prided and newly found work-horse vehicle to take them into the next century, getting 230 miles to the gallon.

A new marketing campaign boasting GM CEO Fritz Henderson’s announcement of the “230” marketing thing-a-ma-jig is related to the new 2011 Chevrolet Volt. Yea, no kidding, it sure isn’t related to the Cadillac Escalade Hybrid that will get you 21mpg for over 70 grand. This would make the new Chevy Volt be the first production car to get triple digit fuel economy ratings. That would be monumental for GM if it were 100% true.

Funny thing is, when I basically say it is not 100% true I am pointing out the fact that the tests that yielded this 230mpg figure is based on combined electric only driving and charge sustaining mode with the engine running. The specifics of the tests were never revealed therefore this figure is just a number to me. A pretty big number, yes, I concur. The EPA has always used stringent testing guidelines when determining a MPG figure based off of “real world driving”. That’s where this 230mpg may go south, when you factor in “real world driving” and none of that lab stuff these guys are “testing”… lets see how fast that 230 mpg figure goes out the window.

For kicks, let’s do a little math. According to GM, the Volt will get 50 MPG in charge sustaining mode. For 11 of those miles, because it will be electric only for the first 40 milesor so, it will use only .22 gallons of gas. If you figure, in 51 miles you burn only .22 gallons of gas, then that will yield a figure of 231.8 MPG!!!! BAAM! There it is.

So, you are telling me that this type of technology has been around for years and we are just now able to build and sell a vehicle, a Chevrolet out of all cars, that gets 230 miles to the gallon? I call BS what about you? I guess we will have to wait A LONG time to really know if this holds to be true. If it is true I will have my rear in line to get one of these… that is if it does not cost more than 30 grand. Ah, wishful thinking right?