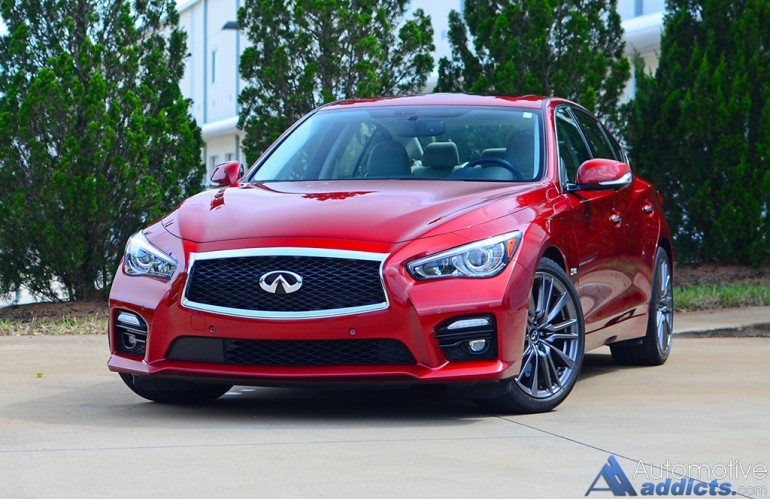 Infiniti has its work cut out to define its purpose and positioning clearly within the wide automotive spectrum. Making a step in the right direction towards this feasible goal, Infiniti introduces a new 400-horsepower and 350 lb-ft of torque twin turbo 3.0-liter V6 engine to the Q50 lineup dubbing the trim as the Red Sport 400.

While the new Q50 Red Sport 400 is not quite the Eau Rouge concept vehicle we were hoping for, it isn’t that far off of the Godzilla-inspired basis. Still, the Q50 Red Sport 400 gets a new VR-series engine, one worthy of praise from hardcore enthusiasts who know exactly where its roots emerge. 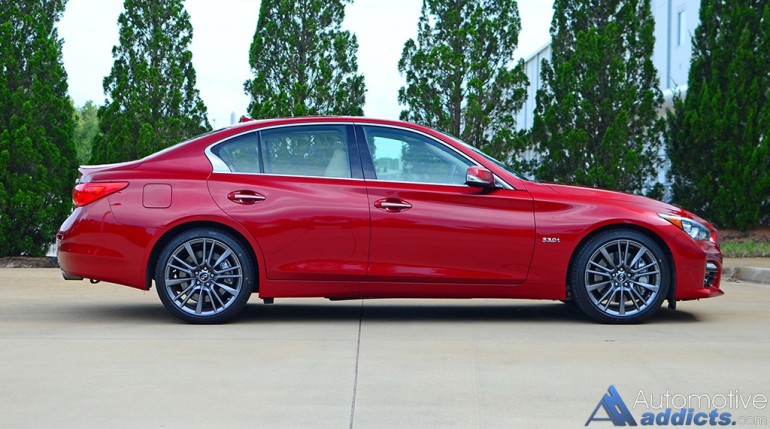 My time with the 2016 Infiniti Q50 Red Sport 400 has unleashed a sleeper into my hands, a vehicle that is unsuspectingly FAST to the tune of reaching 60 mph in about 4.5 seconds. In full disclosure, the run to 60 mph is rather inconsistent where I landed times as bad as 5.31 seconds all the way to 4.49 seconds on a whim when the rear tires were hot, traction control was disabled, and I power-braked out of the hole. The staggered Dunlop Sport Maxx tires with 265/35/R19-inch rears simply don’t have the proper patch to grip the road thanks to the robust power output of the twin-turbo V6 engine. Moreover, the 245/40/R19 front tires combined with the chassis’ shortcoming of dynamically handling 400 horsepower, doesn’t have the proper chops follow through when the Q50 Red Sport 400 is pushed to the limit. On a closed lot, the Q50 Red Sport 400 seemed to sap much of its driving line and balance feeling as if it never fully disabled stability control with the press of the button. 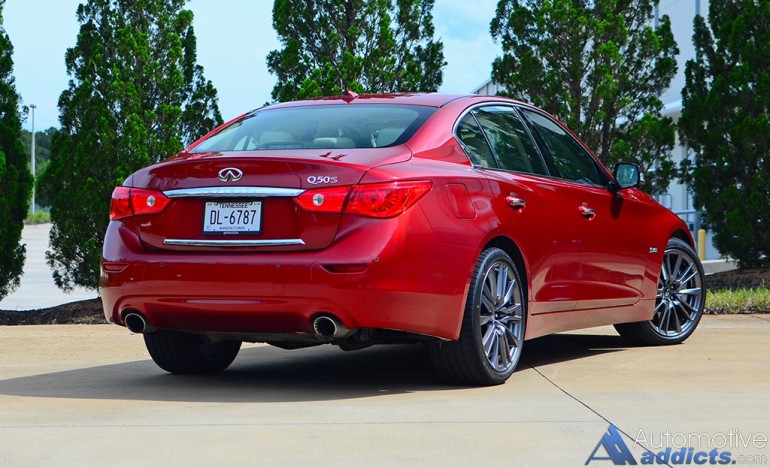 Apart from the Q50 Red Sport 400’s unsettling experience when pushing it to its handling limits, the Q50 inspires confidence on public streets even when carving twisty roads. The Q50 feels right at home for aggressive adventures on the road. Even so, the Q50 Red Sport 400 is a thrasher in a straight line, barking the rear tires on second gear changes and breaking them loose through the top end of the gear requiring countersteering inputs. At times, it feels as if the twin-turbo V6 is too much for the chassis of the Q50 – it needs the full-on performance vehicle treatment much like BMW does for M vehicles, or Mercedes does for their AMG line. To put it bluntly, Infiniti has an opportunity here with this new engine – to match the force-fed powermill and 7-speed automatic transmission with the proper goods to run with the big dogs that tout a racing pedigree. You’re almost there, Infiniti!

Fuel economy doesn’t improve much from the 3.7-liter V6 engine when it served its sole duty to power the Q50. The new 3.0-liter twin-turbo V6 gets EPA-estimated 20 mpg city and 26 mpg highway figures. On an interstate trip, I saw a consistent 27.6 mpg, which isn’t bad considering total output being 400 horsepower in the Q50 Red Sport 400. 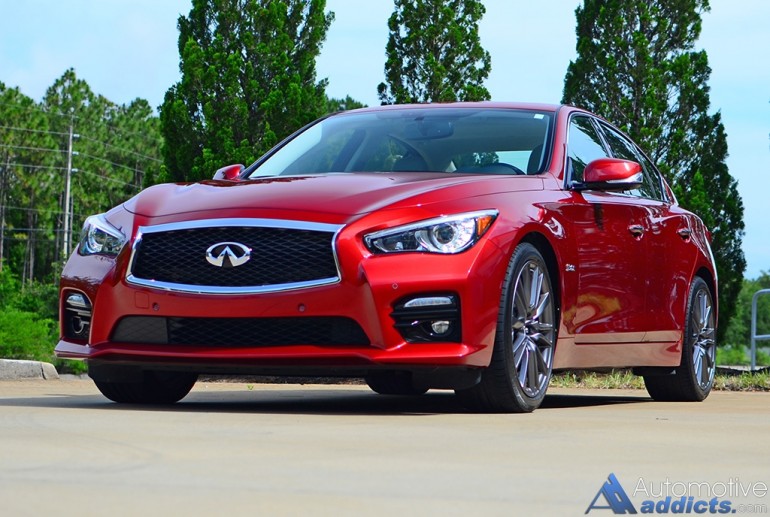 To round up my focus on the 2016 Infiniti Q50 Red Sport 400’s performance, I feel that their “inspired performance” basis is back but lacking a taste of passion.

The use of the Q50’s Direct Adaptive Steering system, or steer-by-wire system, is available to be had for an additional $1,000. However, my test vehicle was not equipped with the latest “improved” unit. Instead, I was left to the most recent iteration of Infiniti’s electric-power-assisted steering, which is mostly numb for feedback but isn’t as conducive to an artificial feeling as my last experience with the brand’s unique Direct Adaptive Steering.

The use of new Drive Modes, (Snow, Eco, Standard, Sport, Sport+, Personal) dials up the adjustable dampers, which can be customized in a Personal setting selecting either Standard or Sport modes. Also changed with the selection of one of the new drive modes is the Engine/Transmission mapping and Steering mode for a Standard or Sport setting, which has a rather subtle change from each mode. 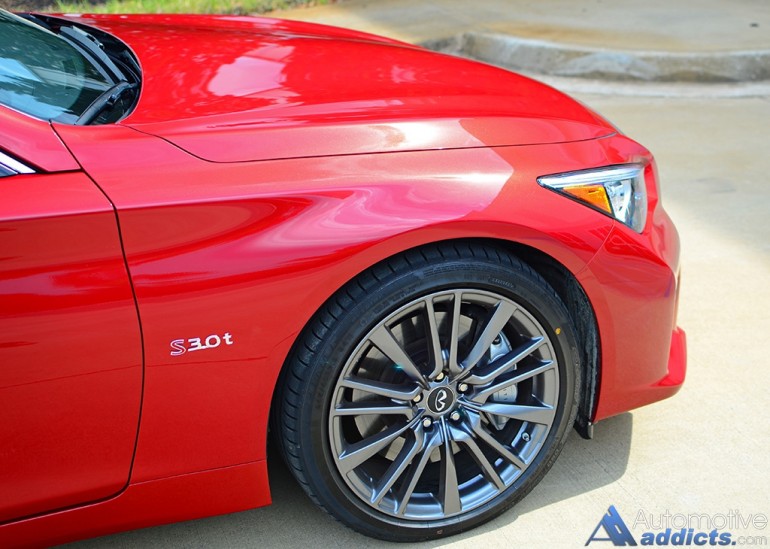 Infiniti failed to “inspire” that delightful sound many of us grew to love in the VQ-series 3.5-liter and 3.7-liter V6 engines in the G35 and G37 predecessors. Plainly stating, the new Infiniti Q50 Red Sport 400’s twin-turbo V6 is quiet, almost too quiet. The exhaust note is basically absent followed up with a faint whistle of air and a muffled growl from the sewing-machine-smooth engine. If Infiniti wanted to introduce the quietest midsized performance luxury sedan with 400 horsepower, they have taken home the gold. 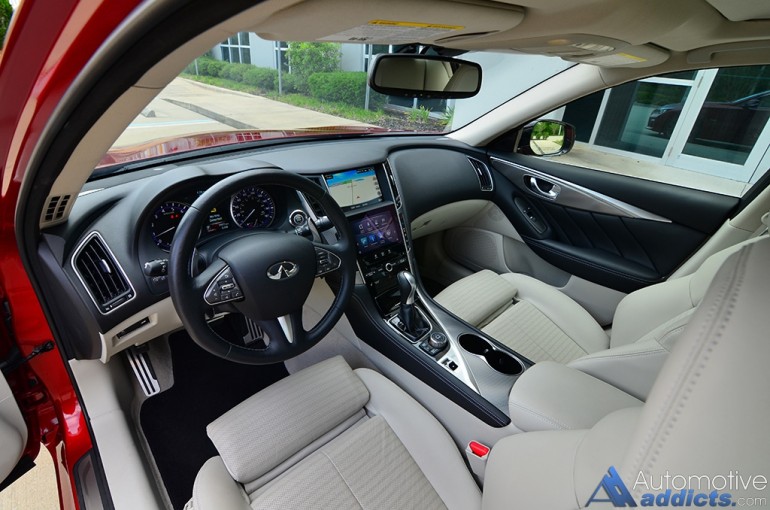 Much of the new Q50 Red Sport 400 exudes the traditional luxury traits from the Q50’s introduction as a 2014 model. However, there is an exceptional amount of control redundancy that begs to confuse some but tries its best to make everyone happy. Infiniti has long been known for having straightforward controls and a subset of controls for its well-to-do infotainment system. Though, the Q50 takes it to another level, which isn’t a good thing considering the use of two touch screens and a plethora of menus that sometimes make no sense. Fundamentally, one could become accustomed to the cluster of functions and the nearly endless methods of controlling those functions. Though, it takes some time to become acclimated to the system. Also, I could not help but to be reminded that Infiniti left out a ventilated seat option, something that a few direct Q50 competitors offer. Such a feature goes a long way in sunny and hot Florida and has been enjoyed on other Infiniti vehicles for many years. 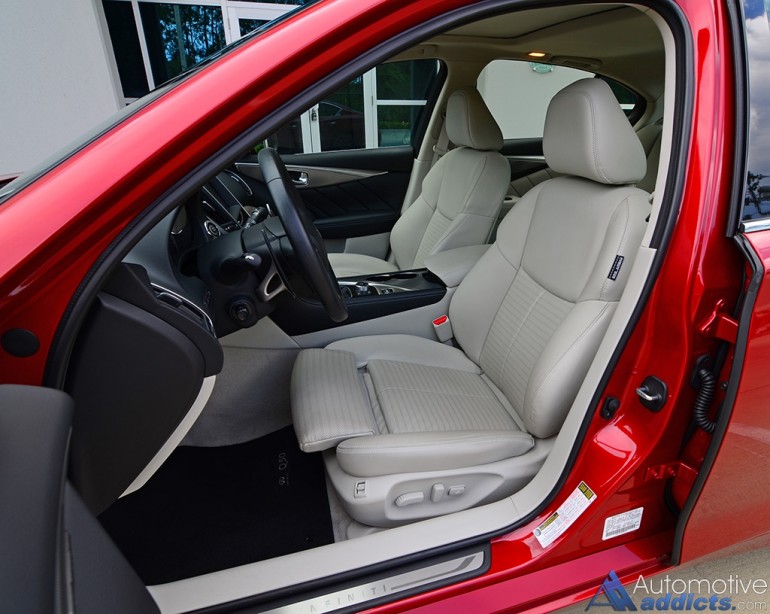 Rolling out several new trim levels to the Q50 line may eventually be a seen as a new reach for Infiniti with a total of three powertrains now being offered. At the baseline the Q50 gets a new 2.0-liter turbo 4-cylinder with 208-horsepower. Next in line, the 3.0-liter twin-turbo V6 comes into play for the Q50 Sport but with 300 horsepower, 100 less than the Red Sport 400’s re-tuned twin-turbo V6. Each trim level is available with all-wheel-drive, further emphasizing the brand’s reach to garner new buyers that may live in northern regions who can benefit from powering all four wheels. 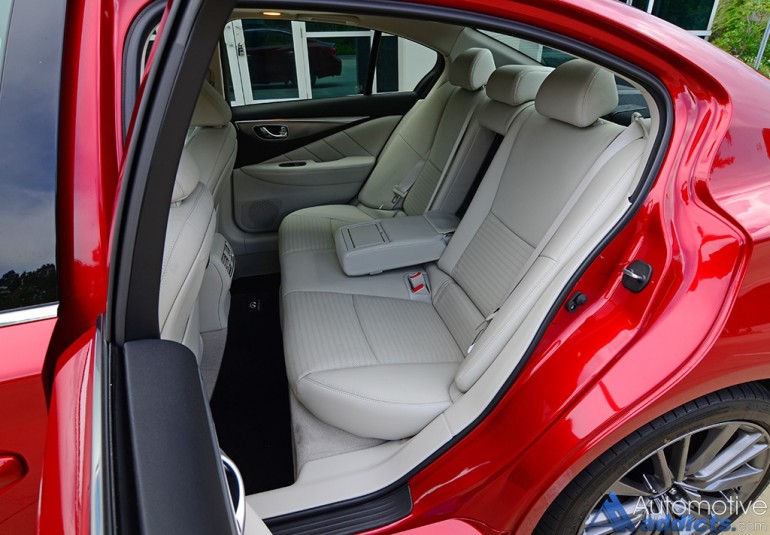 At the bottom line, pricing for the new 2016 Infiniti Q50 is quite respectable considering you can get a 400-horsepower luxury sports sedan starting at a price of about $48,000. Adding in a couple option packages, including the Driver Assistance Package (around view monitor, blind-spot warning, backup collision intervention, forward emergency braking, and predictive forward collision warning) and Premium Plus Package (heated steering wheel, heated front seats, remote engine start, Navi synchronized adaptive shift control, Infiniti InTouch services and Navigation Lane Guidance) the as-tested price comes to $53,795 including a $905 destination charge.