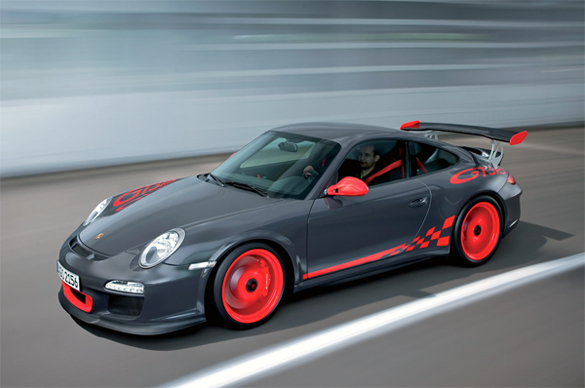 After the updated Porsche 911 Turbo, comes the newly updated 2010 Porsche 911 GT3 RS. Porsche has always made small subtle changes and the newest 911 GT3 RS is no exception to the rule. Using the same new 3.8-liter naturally aspirated flat six as the normal GT3, the RS edition adds another 15 or so horsepower, totaling around 450hp, while continuing to push the envelope in the weight savings department.

The GT3 RS is nothing short of a race-bred gem that you can drive on public roads. The weight reduction has gone to new lengths even to the point of incorporating a lithium-ion battery to shave another 22lbs. off of the vehicle’s weight. But do not be mistaken, the lithium-ion battery is nothing to hint hybrid or electric of any sort, the GT3 RS is pure all-motor performance.

Pricing for the newest 911 GT3 RS is listed at $132,800 and look for more details to be revealed at the upcoming Frankfurt Motor Show next month.

Delivering even more engine power, lower weight and shorter transmission ratios, as well as upgraded body and suspension components than all previous GT3s, the new Porsche 911 GT3 RS sets the foundation for homologating the race version of the 911 GT3 and will be introduced at the Frankfurt Motor Show September 17-27, 2009.

The heart of the new, uncompromising GT3 RS is the power unit. Like the engine featured in the 911 GT3, the naturally-aspirated RS power unit now displaces 3.8 liters and delivers even more power, while revving up even faster to its 8500 rpm redline. It now delivers 450 horsepower, 15 more horsepower than its 911 GT3 counterpart. Even with a specific output of more than 118 hp per liter from the six-cylinder boxer engine, the power unit in the new GT3 RS remains fully suitable for everyday use.

The new 911 GT3 RS comes exclusively with a six-speed manual gearbox optimized for short gearshift travel, low weight and high efficiency. To enhance the level of performance throughout the entire range of engine and road speed, the transmission comes with shorter ratios than found in the 911 GT3, deliberately conceding an even higher potential top track speed.

Dynamic engine mounts are standard and serve to improve the car’s handling to an even higher level. Depending on driving conditions, the mounts change in their stiffness and damping effect, improving the connection between the engine and the body when driving under very lively conditions, yet allow for more comfortable conditions during everyday street use.

Porsche is also introducing another new option in 2010 for the GT3 RS, a lithium-ion battery. Delivered with the car and, when replacing the conventional lead-acid battery, it reduces the weight by more than 10 kg or 22 lb and is mainly intended for the track.

To further improve its sporting behavior, the new 911 GT3 RS comes with a purpose-built and specially set up PASM suspension, a wider front and rear track and corresponding bodywork.

The new 911 GT3 RS shows its close connection to motorsport through its dynamic looks, in particular by its low ride height, the new, extra large carbon-fiber rear wing and titanium exhaust system.