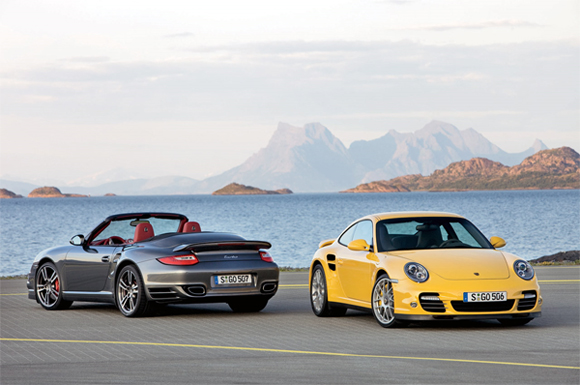 They are getting rid of the 3.6-liter six. Here comes a new 3.8-liter directed injected flat-six from the Carrera S. Coupled to two variable-vane turbos, power is now 500 hp. And because it’s direct injected, mileage increases from 22.1 mpg to 24.1 mpg with the manual. Should you opt for Porsche’s 7-speed Doppelkupplungsgetriebe (dual-clutch) gearbox, mileage improves from the old Tiptronic’s 20.8 mpg to a very impressive 24.8 mpg. Also gone (kinda) are the silly dual-action faux-paddle shifters. Replacing them are F1 style right-is-up, left-is-down wheel-mounted paddles — a welcome improvement, though we’d still prefer column-mounted shifters like on Ferraris and Godzilla. And you can still opt for the inferior dual-action buttons if you like.

The Sport Chrono Package Turbo allows the 2010 911 Turbo to accelerate from 0-60 mph in 3.2 seconds when combined with the new, highly acclaimed Porsche-Doppelkupplung, or PDK seven-speed transmission. Also included in the Sport Chrono Package Turbo is Porsche’s innovative dynamic engine mounts. Introduced earlier this year on the 2010 GT3, the new mounts utilize magnetic fluid that automatically adjusts for comfort or sport, depending on the driving conditions. Top track speed is 194 mph for both the Coupe and the Cabriolet models.
Pricing is listed for the coupe and cabriolet at $132,800 and $143,800 respectively, with an on-sale date of November 2009 in Germany and January 2010 here in the United States.

All of this seems really great I found one thing kind of interesting if you look at the pictures of the yellow 911, don’t the rims resemble the CSL rims on the BMW M3? Now, maybe because I am a BMW guy I notice that or to me it feels like they are VERY similar but I could be wrong.

Stuttgart. Dr. Ing. h.c. F. Porsche AG, Stuttgart, is proudly presenting a new top model at the pinnacle of its broad range of production sports cars: The new Porsche 911 Turbo combines far-reaching innovations in technology with fine tuning and supreme refinement in design. All key features of this high-performance sports car have been significantly improved, the new 911 Turbo combining a substantial improvement in fuel efficiency and lower weight with more power, even higher speed, and enhanced driving dynamics.

Particularly in terms of fuel economy and dynamic performance, the new top-of-the-range 911 from Zuffenhausen now stands out even more than before from its competitors in the market. Porsche’s new top model will be presented to the public for the first time at the Frankfurt Motor Show from 17 – 27 September.

The heart and highlight of the seventh generation of the Turbo is the new power unit displacing 3.8 litres and delivering maximum output of 500 bhp (368 kW). The first entirely new engine in the 35-year-history of the Turbo comes with features such as Direct Fuel Injection and Porsche’s exclusive turbocharger with variable turbine geometry on a gasoline power unit. And as an option, the new six-cylinder may be combined for the first time with Porsche’s seven-speed PDK Doppelkupplungsgetriebe (Double-Clutch Gearbox).

The combination of PDK, Direct Fuel Injection and turbocharging ensures an unprecedented standard of efficiency, agility, responsiveness and performance, the Porsche 911 Turbo reducing CO2 emissions versus its predecessor by almost 18 per cent and therefore ranking unique in its segment also in this respect. Depending on the configuration of the car, the new top model requires just 11.4 – 11.7 ltr/100 km (equal to 24.8 – 24.1 mpg imp) under the EU5 standard. And unlike most other cars in its segment, the new Turbo remains even further below the crucial level of fuel consumption for gas guzzler tax in the USA, the special tax imposed on cars with substantial fuel consumption. All this despite acceleration to 100 km/h in 3.4 seconds. Top speed, in turn, is 312 km/h or 194 mph.

The Turbo driver of the future will also enjoy a further improvement in driving dynamics, detailed enhancement of PTM fully controlled all-wheel drive and PSM Porsche Stability Management being further supported by new PTV Porsche Torque Vectoring available as an option. This makes the car even more agile and precise in its steering for an even higher level of driving pleasure.