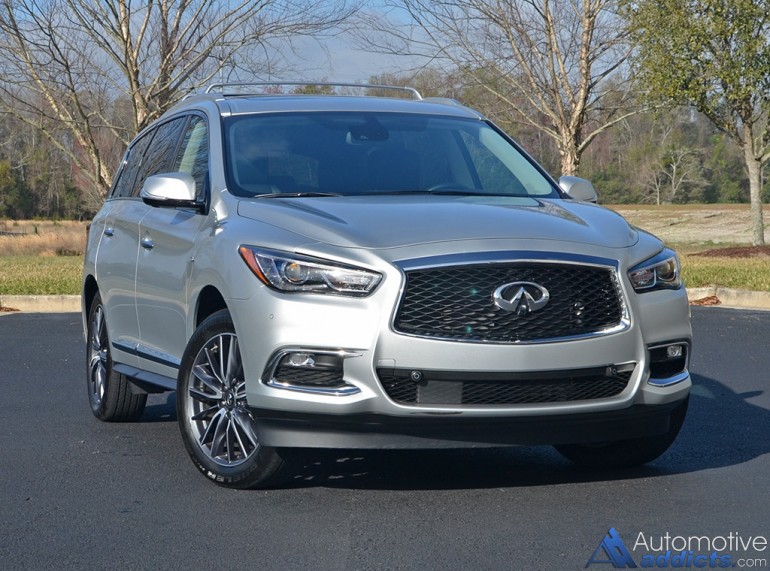 In the current American automotive market, SUVs and crossovers are continually winning over the masses often stealing the thunder from family sedans and minivans. Moreover, SUVs and crossovers have captivated the luxury market where vehicles like the latest Infiniti QX60 appease to many well-to-do and growing families who seek a quiet, comfortable, and versatile luxury crossover with seating for seven. 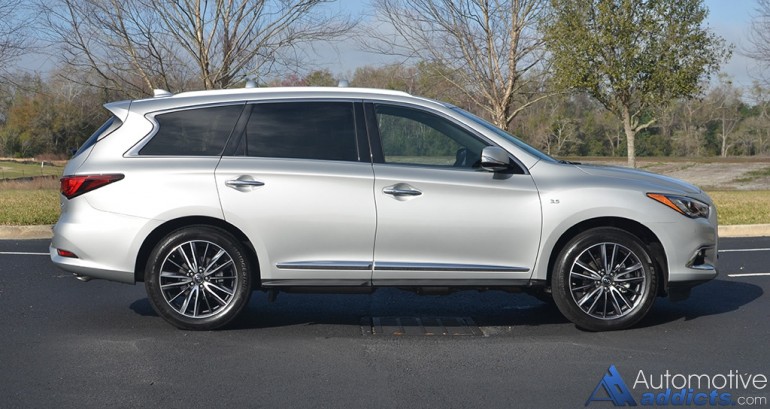 The 2017 Infiniti QX60, which was once known as the JX35, gets slight updates for the new model year in the area of automatic high-beam headlights, a hands-free feature added to the power rear liftgate, and a bump in power from a reworked 3.5-liter V6 engine without sacrificing fuel efficiency. The latest V6 engine puts out a healthy 295 horsepower and 270 lb-ft of torque to the front wheels. The optional Intelligent All-Wheel-Drive system splits power to add up to 50% to the rear wheels when needed. Otherwise, the QX60 AWD model at cruising speeds decouples the rear wheels with 100% of power to the front wheels for added fuel efficiency.

Continuing the well-praised formula of the QX60, the 2017 model lives on as an extremely versatile package offering up delightful luxury appointments and a stylish look shared with the brand’s new signature design language adding a sporty flare. The Infiniti QX60 has always been a smooth delight to drive with one of the best CVTs (Continuously Variable Transmission) on the market, which sometimes emulates the shifts of a conventional automatic transmission upon mid to full throttle inputs. 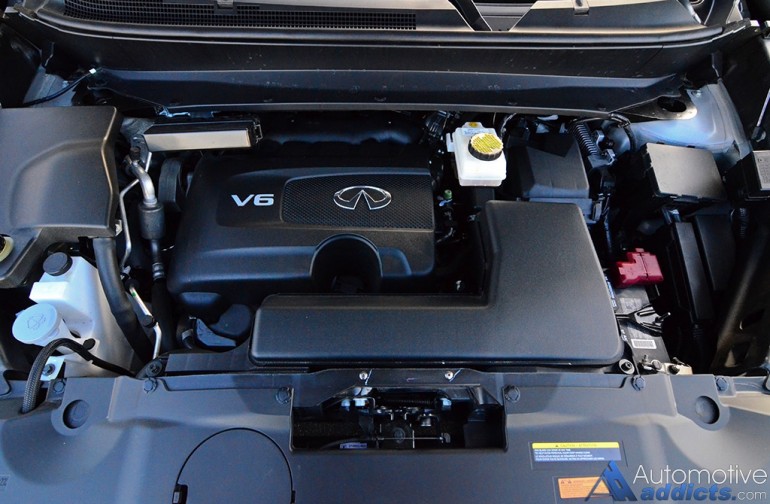 While the Infiniti QX60 is far from a performance SUV or crossover, it does hold its own and some with good response and quick adaptation of the CVT to find the optimal ratio for your desired rate of acceleration. Reaching 60 mph takes about 7.4 seconds, which is faster than ever before in the QX60. The reworked 3.5-liter V6 engine is eager to rev and does so in a smooth fashion at the mercy of the CVT where it allows the RPMs to climb and remain near the sweet spot as the transmission emulates shift points with slight RPM and ratio kick-downs. There hardly is ever a time that the QX60 feels inadequately powered. There are times that the QX60’s willing V6 breaks the front wheels loose on my front-wheel-drive test vehicle unsettling the vehicle momentarily, especially coming out of turns. Opting for the optional all-wheel-drive system is more suited for those who plan on encountering snow but isn’t reserved for most off-roading duties. 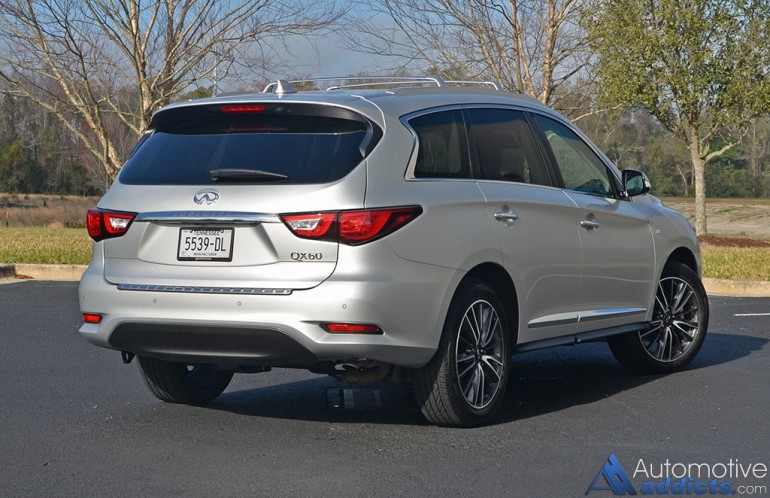 The body control of the QX60 is more laid back and dialed-in for road commutes more so than canyon carving. The electric steering rack is mostly numb and can be unsettling at times with a strange and unnatural off-center feel as if the feedback is directed by a delayed servo motor instead of the natural progression turned wheels on pavement. Overall, the QX60 provides just enough assured handling to make you feel safe provided you don’t push it too hard into our out of exit ramps or turns. The weighted feel of all its 4,383 pounds shows its face during spirited drives, which can be somewhat distressing when you have an abundance of precious cargo in the back.

Fuel efficiency has remained mostly the same throughout the previous couple years, and with the added power of the latest V6 engine, the EPA estimates continue at the respectable 20 mpg city and 27 mpg highway for the front-wheel-drive model. The all-wheel-drive QX60 marks an EPA-estimated 19 mpg city and 26 mpg highway. 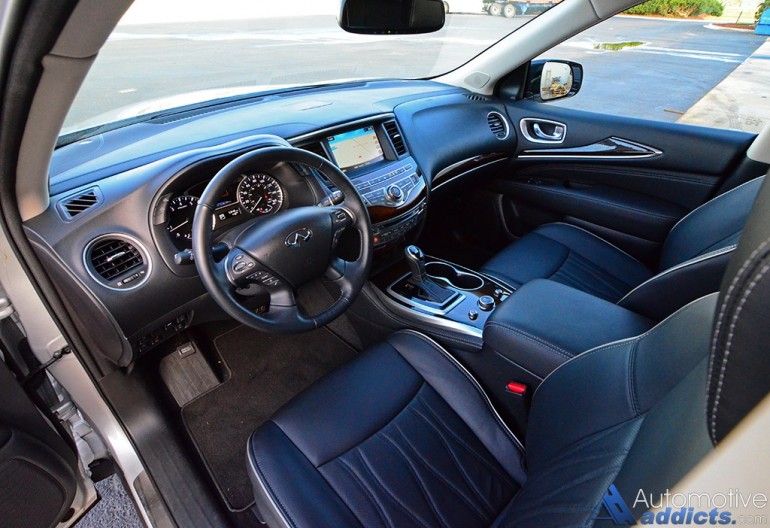 Where the 2017 Infiniti QX60 shines is its interior accommodations making entry and exit an easy feat for most. The front seats, with their heated and cooling through perforated leather inserts, are power-adjustable in the right areas and provide exceptional comfort on long trips. The second-row seats provide heating on the outboard seats with forward, aft, and reclining adjustments. The unique folding action of the second-row outboard seats open up a large pathway to enter the third-row seats. The QX60 also offers automatic rear seating climate controls as the 3rd zone with vents for second and third-row passengers. The seating areas for the second-row are respectable but can be a bit unwelcoming for whoever sits in the middle seat as it is much narrower. The third-row seating can accommodate adults but the second-row seats must be adjusted forward for taller occupants, which may not be welcomed due to the slightly lower roofline just after the rear non-opening glass moonroof. 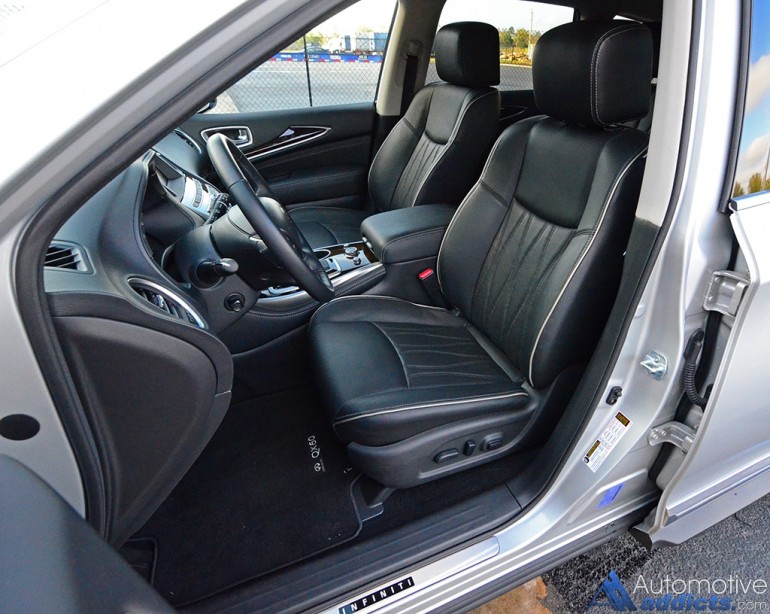 The wood-trimmed and soft-touch dashboard of my QX60 test vehicle has remained virtually the same from the past couple years with the exception of a slightly updated infotainment system. The newer infotainment system bundles in many of the expected older traits of Infiniti controls with a redundancy through the physical buttons and touch screen. However, the system is now mostly unintuitive with a few confusing menu sets and lacking vehicle settings through the center infotainment unit. Many of the essential vehicle settings are now controlled through the steering displaying on the center color driver’s gauge cluster screen. Though, the system’s overall response is good and after taking a good amount of time learning the many screens one could later become acclimated to the odd setup. 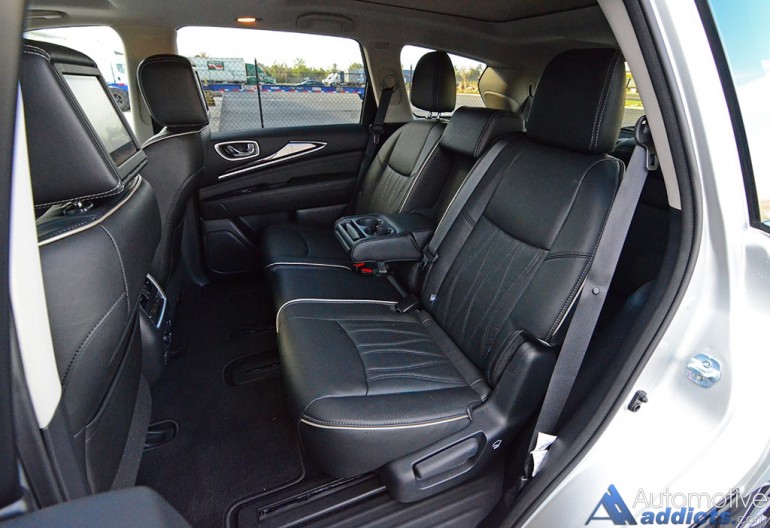 There are a plethora of advanced safety features and tech to make your drive safer and more relaxing in the QX60. The latest adaptive cruise control system is used, which also incorporates the safety features of forward collision alert with automatic emergency braking, blind spot monitors, and lane departure warning and mitigation, which are all part of an optional Deluxe Technology Package. Other notable features as part of my loaded-up QX60 test vehicle include 20-inch alloy wheels, motion-activated power liftgate, a 15-speaker Bose audio system, around-view monitor (360-degree camera system), heated steering wheel, remote start, intelligent keyless access with push-button start, moving object detection with the backup collision intervention system (automatically brakes upon detection of intersecting objects, moving or stationary), and a 8-inch headrest entertainment system with DVD playback as part of an optional Theater Package. 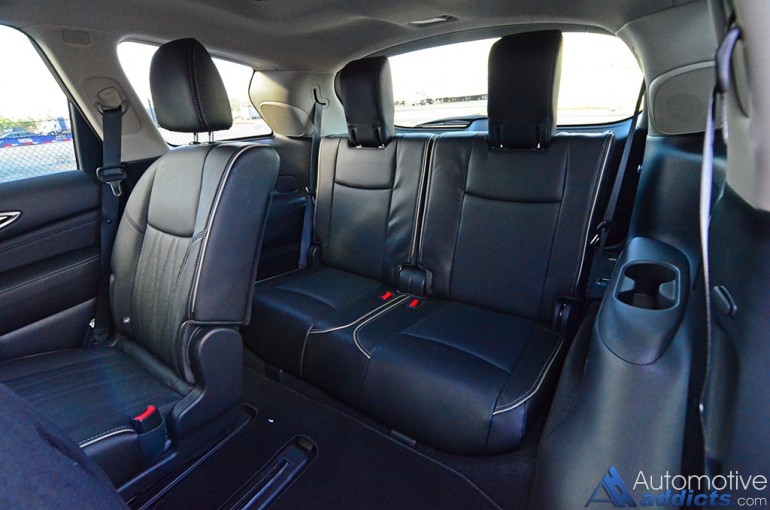 To add to the exceptional versatility of the QX60, the cargo capacity is good with a rear area that opens up to just over 76 cubic feet of storage with the third and second-rows folded flat. Folding down the seats is also a simple act as is accessing the new hands-free power liftgate with a swipe of your foot under the rear bumper. 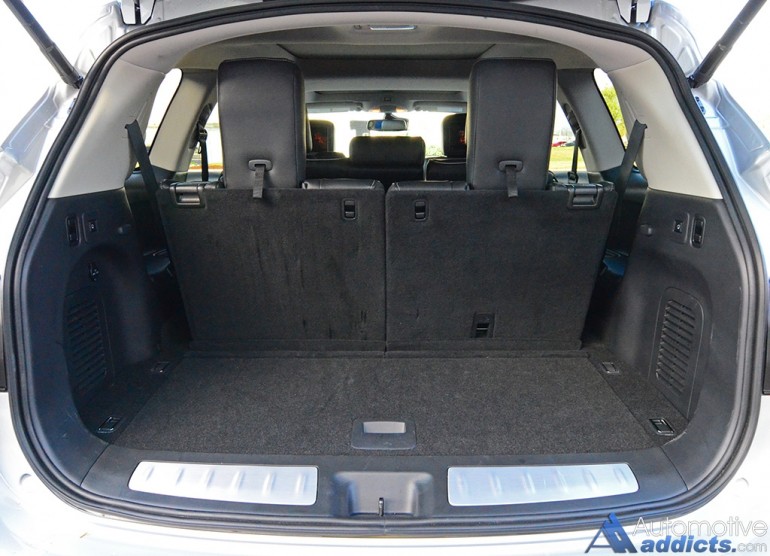 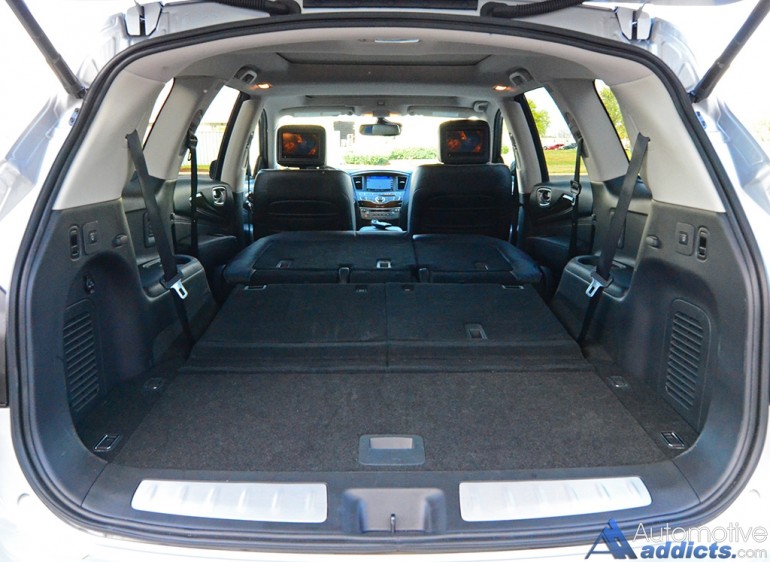 The 2017 Infiniti QX60 has kept with its welcomed tradition of a favorable luxury crossover that drives like a car with exceptional versatility and comfy seating for up to seven passengers. The pricing of the QX60 has also remained respectable for its segment starting at $43,100 but quickly climbing to my test vehicle’s loaded price of $58,245, including a destination charge of $995.