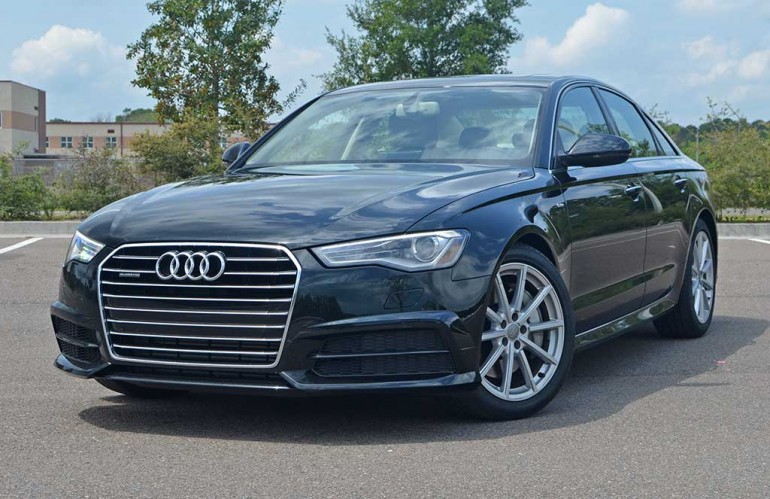 Surprisingly, the Audi A6 has been considered by many as an underdog in a vast midsized luxury sedan segment. Despite such a thought, the Audi A6 delivers on performance, luxury accommodations, and recognizable style in a well-to-do German package. With that, the Audi A6 for the 2017 model year only gets a subtle styling update but retains much of the somewhat outdated content when compared to the brand’s updated theme first found in the new A4. 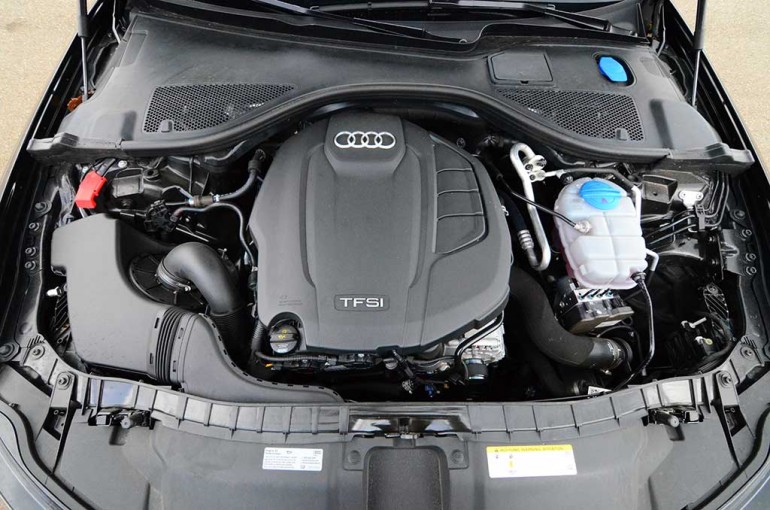 The 2017 Audi A6 retains its highly praised powertrains starting with a 2.0-liter turbocharged 4-cylinder engine found in my Quattro (All-wheel-drive) Premium Plus test vehicle. At the Premium Plus trim level, one tier above the base Premium trim; you can opt for the more powerful 3.0-liter Supercharged V6 engine with 333 horsepower and 325 lb-ft of torque.

Making due with my Premium Plus 2.0T Quattro test vehicle, the turbocharged 4-cylinder musters out 252 horsepower and 273 lb-ft of torque delivered to all four wheels through an 8-speed automatic transmission. The driving nature of the 2.0T Audi A6 Quattro is mostly an expected formula where there is a substantial amount of mid-range power. Pushing the turbocharged 4-cylinder Audi A6 hard you will find that there is a bit more power to be desired. Though, the consistent power output doesn’t completely disappoint as it is followed up with an exceptionally stable and assuring ride quality. There is even an eagerness to the turbo-4-cylinder to spool up fast as to prevent any noticeable turbo lag. Zero to 60 mph comes in around 6.2 seconds.

Audi, as part of the traditional German heritage of birthing vehicles poised for the autobahn, delivers on injecting the latest A6 with the proper chops to keep pace with triple digit people movers. The A6 2.0T isn’t at all a pushover with a rigid chassis and a compliant suspension setup that keeps things enthusiastic without sacrificing a comfortable ride. While there is a lack of feedback from the road through luxurious isolation, the A6 does just enough to pass the test of light-hearted enthusiasts. There is undoubtedly a high-strung character waiting to break out of the A6 as it does just that in the performance-injected variations, which is known as the S6 – touting a healthy 450 horsepower from its V8 engine. 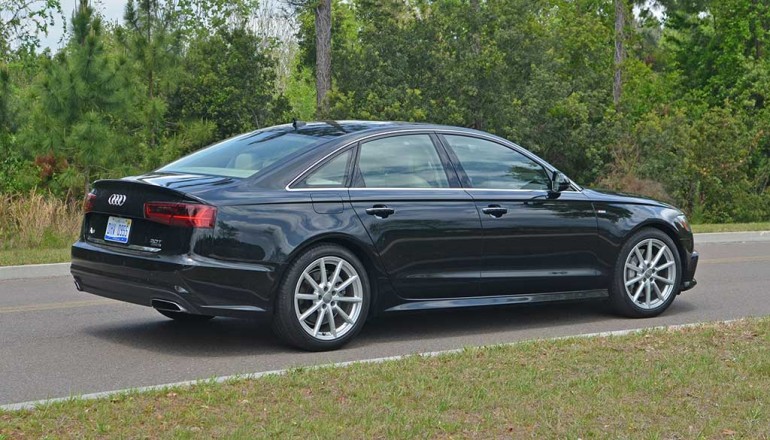 Fuel economy from the Audi A6 2.0T Quattro is somewhat decent. Where the new Audi A6 2.0T excels is in its base front-wheel-drive setup getting 25 mpg city, 35 mpg highway, and 28 mpg combined. My new A6 2.0T Quattro gets slightly lower EPA estimates at 22 mpg city, 31 mpg highway, and 26 mpg combined. However, I noticed mostly consistent numbers during my drive averaging about 28.2 mpg overall, which was a balanced mix of highways and local suburb roads. 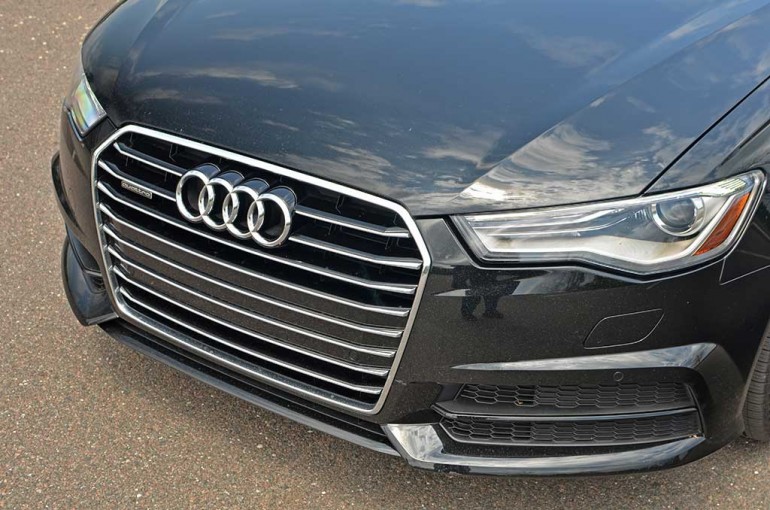 The exterior styling of the Audi A6 remains to be somewhat contemporary leaving room for the sporty styling to come to fruition in the S6. Though, for the 2017 model year, the A6 receives additional sports styling by the way of the 3.0 Competition trim with sport suspension, flat-bottom steering wheel, red brake calipers, special contrast-stitched leather interior, and a Quattro all-wheel-drive system with a sport rear differential.

Audi continues to make available a bevy of options and packages to customize your A6 to your liking. The somewhat contemporary style of my middle-of-the-row A6 2.0T Quattro Premium Plus test vehicle with its 19-inch wheels can be drastically changed by opting for a higher trim level, which there are a total of four to choose. 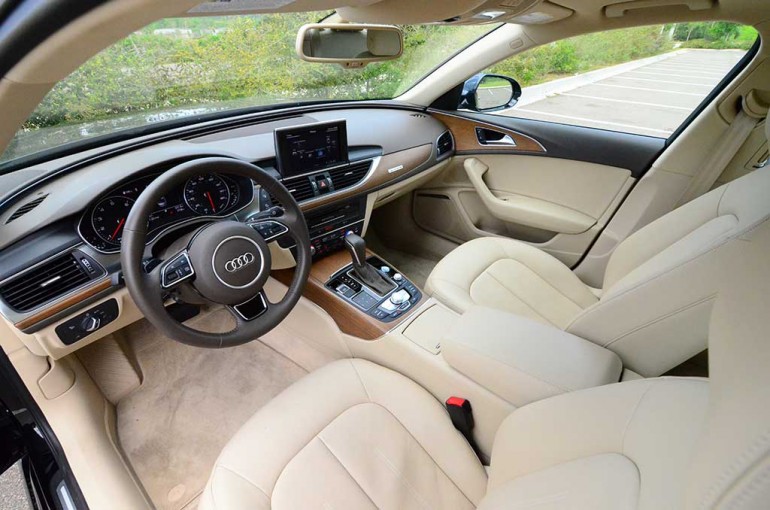 At the level of content, luxury amenities, and high-tech features, the Audi A6 keeps with an old tradition that has been improved upon in revamped models like the new 2017 A4. Lacking much of the newer high-tech equipment of such vehicles, the new 2017 A6 is left to do with older content in its MMI (Multimedia Interface) infotainment unit that feels somewhat dated, especially after reviewing other Audi vehicles with the proper updates and the highly praised virtual dashboard. While there are several forward-thinking aspects of the 2017 A6, such as the center dashboard cluster LCD screen that can emulate the navigation and a plethora of vehicle information, the setup comes off as a leftover considering I have experienced much better in smaller iterations of the Audi lineup. However, the A6 still proves to offer the fundamentals expected in a midsized luxury sedan, including newer add-ons like Apple CarPlay. 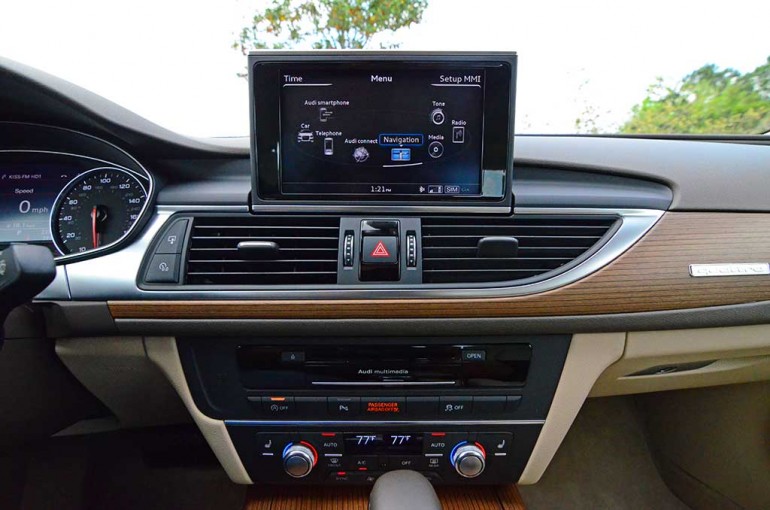 Where the 2017 Audi A6 continues to thrive is its offering of a spacious interior that conforms to make wise use of every inch. I find the Audi A6 to be quite comfortable with a long range of power front seat adjustments to find the optimal seating position. The cabin, overall, looks to be comprised of high-quality materials with several soft-touch surfaces where they matter. 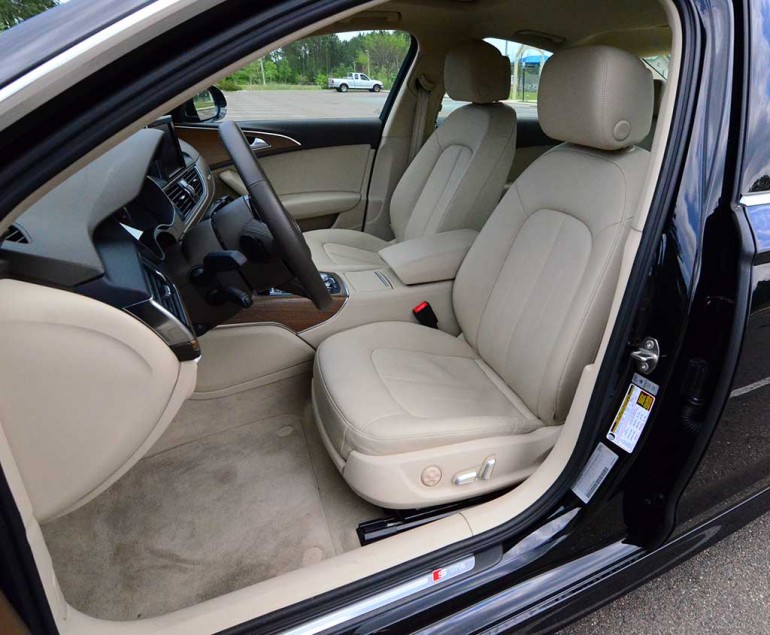 The extension of Audi’s older high-tech spills over to offer many of the creature comforts that you expect in a midsized luxury sedan. There you have the availability of several active and passive safety features, the expected convenience features for easy entry and exit, and many welcomed luxury add-ons, such as a heads-up display, climate-controlled front seats, multiple zones automatic climate controls, and full LED lighting inside and out. I will say, Audi leaves room for improvement in making additional features available throughout the trim line of the A6, which is expected to be part of a forthcoming update of the A6 to join its updated brethren in the vast model lineup. 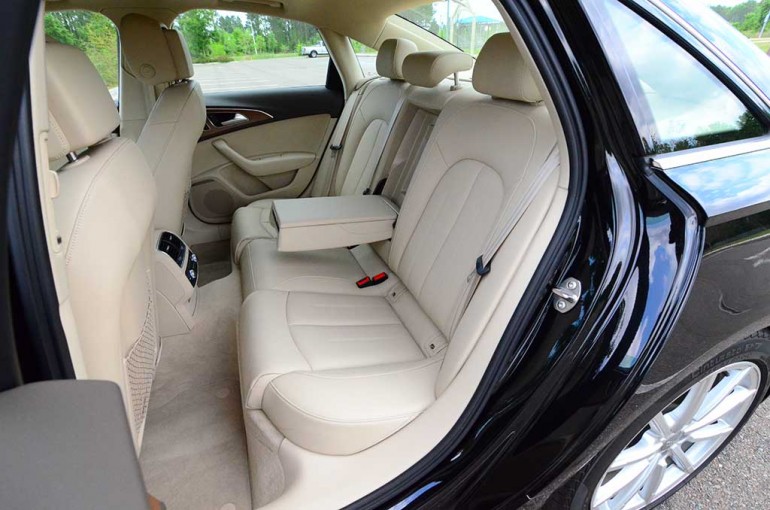 Probably one of the more attractive parts of the 2017 Audi A6 to make up for its somewhat outdated content is the price point that starts at just $47,600. Such a price is admirable for a German midsized luxury sedan. Nevertheless, that price will quickly rise with the addition of several highly desired features, which lands my A6 2.0T Quattro Premium Plus test vehicle at an as-tested price of $56,875.