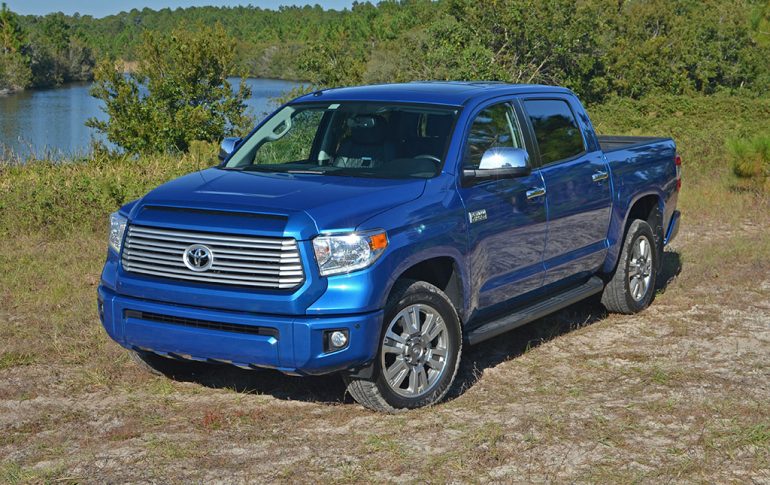 Let’s face it, America isn’t complete without our big trucks, and there are only a few automakers who we look to for appeasing our needs for towing thousands of pounds, hauling tons of cargo, conquer rough terrain, and do it all in a luxury-like style that permits comfy daily commutes to the office. Toyota has been in the foray of offering the Tundra for over 17 years as a commendable, big, brawny truck that we commonly run against the Big 3’s offerings. Continuing and stretching out its second generation, the Tundra keeps literal pace with the competition with a methodical approach to the American truck theme.

>> Get the best price on the Toyota Tundra from a network of local dealers now. << 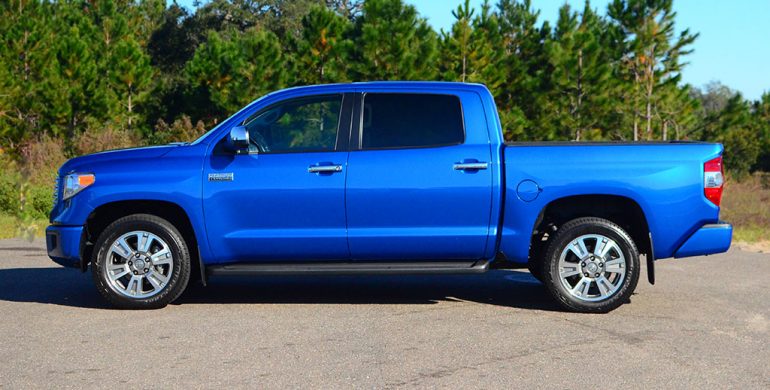 The 2017 Toyota Tundra, just before a 2018 model year refresh, reminds me of the systematic approach that Toyota takes with much of its lineup, which has paid dividends in the company being a top seller recognized in America as building some of the most reliable vehicles around. The Toyota Tundra isn’t any different in Toyota’s mantra, which has afforded them to continue to keep the Tundra simplistic with minimal tech equipment proving that they have chosen to stick with what’s proven and what is long-lasting. Much of the durability in the Tundra starts with its 5.7-liter V8 engine, a powerhouse that drinks copious amounts of fuel and isn’t afraid to do it just to show off its muscle in the ability to tow up to 10,500 pounds when properly configured. 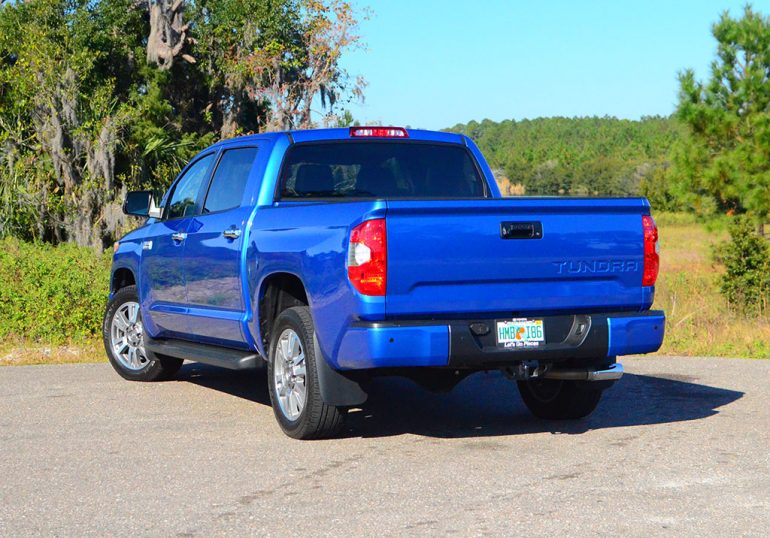 The overall performance of the Tundra is mostly predictable with its high stature akin to any full-size truck, which you would not want to push too hard in turns. The handling is mostly on point for what you would expect from a big truck, certainly no different than other comparable offerings in the segment. The Toyota Tundra can be had with a smaller V8 engine, the 4.6-liter with 310 horsepower and 327 lb-ft of torque, which places somewhat of a limitation on towing and but keeps things on pace without carrying a load. The larger engine, the 5.7-liter i-FORCE V8 touts 381 horsepower and 401 lb-ft of torque getting things up to speed quicker and has enough grunt to hardly tax larger towing and hauling weights. Of course, performing its duties both engines have disappointing fuel consumption figures with the larger 5.7 V8 have an EPA-estimated 13 mpg city, 18 mpg highway, and 15 mpg combined. While most of what I have observed in the Tundra, fuel consumption remains consistent but dismal. Thankfully, there is a massive 38-gallon fuel tank to reduce your fueling stops. Expect to pay big at the pump to fill that up, though. 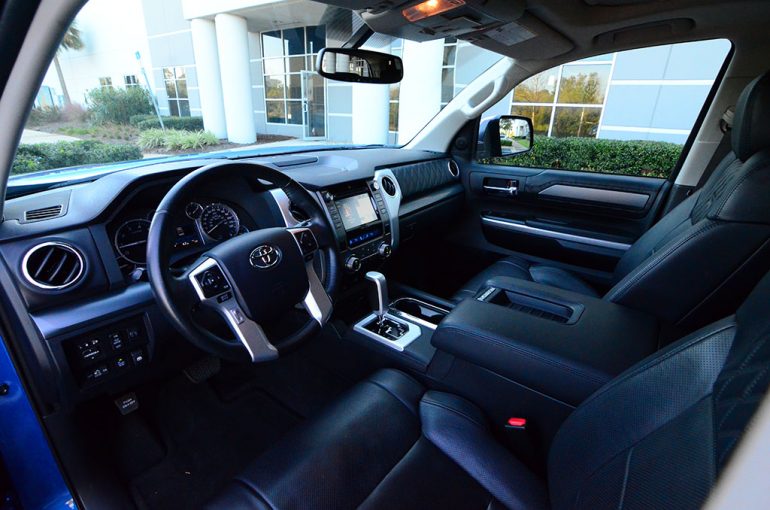 The Toyota Tundra’s ride quality remains to be decent and never overly harsh or jiggly. In the larger CrewMax configuration of the Toyota Tundra, there is ample room for any size driver and passengers with the availability of leather seating and a few creature comforts in the Platinum and 1794 Edition trim levels. The seating out back is almost like lounging in your favorite 3-seat living room couch, it’s just that big. Though, making due with a simplistic formula, the interior of the Tundra falls a little short of some of the more-expensive iterations of its competition that attempt to pull off more luxury tricks than offered on the Tundra. There is an abundance of hard plastics but they never make the cabin feel overly cheap. Still, with its proven formula and the availability of several trim and configuration combinations, the Tundra appeases many from the common stripped-out fleet work truck to my loaded-up Platinum Tundra test vehicle. 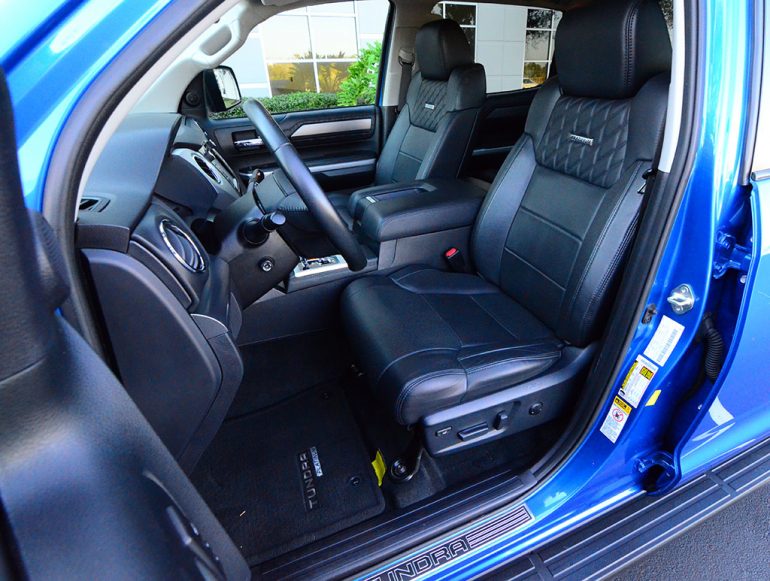 In the focused landscape of pickup trucks, there isn’t much to choose from considering the limited number of manufacturers making full-sized trucks. Toyota has proven themselves to run with the big dogs for many years and the number of Tundra’s new and old on the road is evidence of the trucks prowess and long-lasting durability. In looking to the refreshed 2018 model year, with an expectancy of added features and new safety tech, the Tundra will keep with tradition in being one of the American trucks, made in America, for Americans of all walks of life with an excellent value proposition. 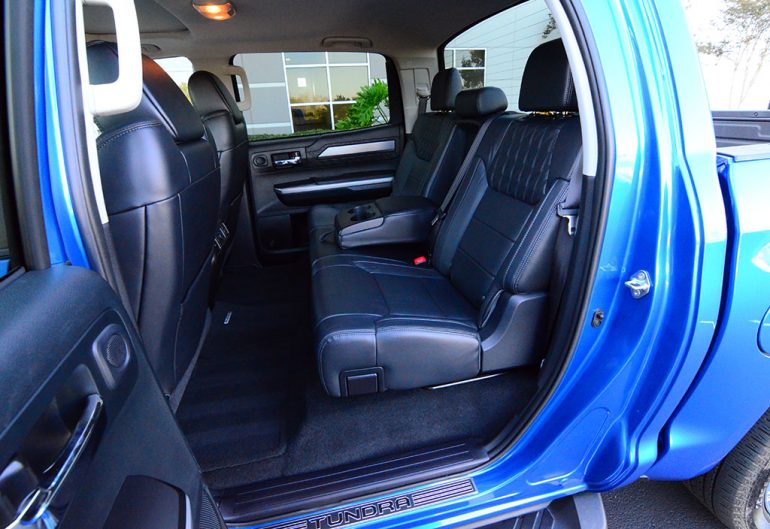 >> Get the best price on the Toyota Tundra from a network of local dealers now. <<