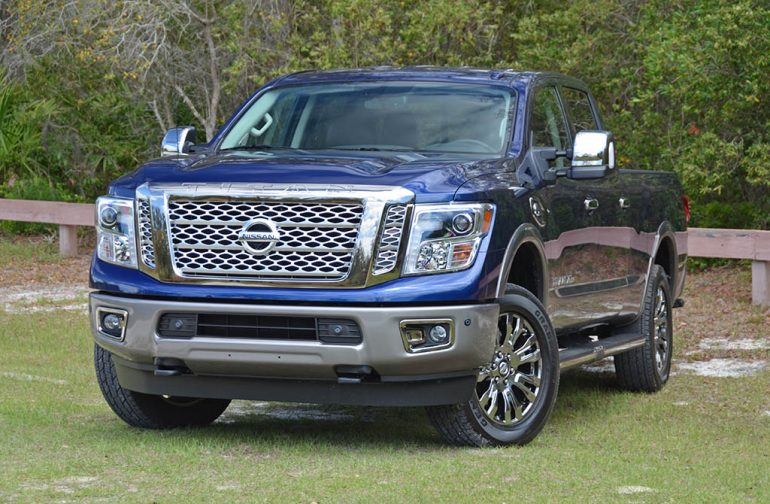 In America, trucks are nearly as important as your first born. What was once known as the big three automakers dominated the American landscape when it came to Trucks. Today, many things have changed and there are Japanese automakers now making an impact when it comes time to select your truck, which is now sought after to serve multiple purposes apart from the duties of hauling and towing.

>> Get The Best Price On The Nissan Titan XD from a network of local dealers now. <<

Nissan has long been a passive alternative to the truck world with its Titan as it attempted to run with the big dogs. In its latest form, completely redesigned for the 2017 model year, the Titan moves closer to be a formidable alternative to the status quo of trucks. Moreover, offering a new Titan XD heavy-duty truck equipped with a Cummins Diesel engine, my latest test vehicle, begs to give truck buyers exactly what they want in a highly capable truck that can haul over 2,500 pounds and tow a staggering 12,030 pounds. 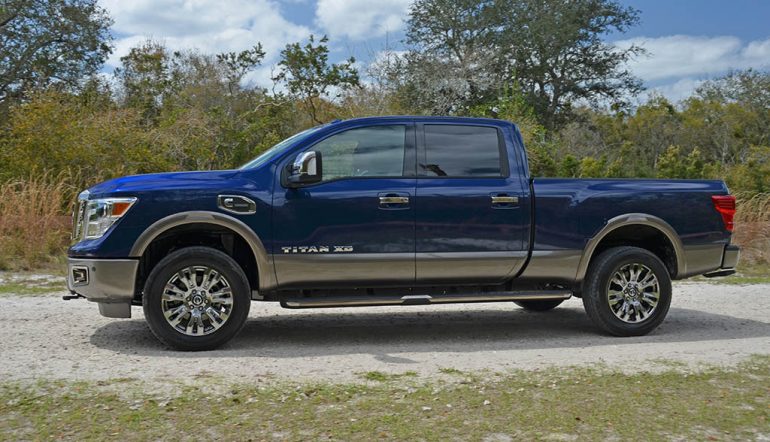 From its towing and hauling stats alone, the new 2018 Nissan Titan XD Cummins Diesel is a serious rig that toys with the best of them in their full-sized capacity. After spending some quality time with the Titan XD Diesel, there is much to like and to set it slightly apart from the competition. Though, at the same time, there is the matter of the Titan XD Diesel having a curb weight of 7,396 pounds mostly sapping its robust 555 lb-ft of torque from the 5.0-liter V8 Cummins Turbo Diesel engine mated to a direct-feeling 6-speed automatic transmission. The turbo diesel is a welcomed option for the Titan XD but its 310 horsepower and 555 lb-ft of torque don’t exactly translate into a serious people-mover. Still, the sheer power, which is somewhat hidden, comes to life when the engine is taxed with heavy weight as I found in hauling just over a 800 pounds worth of yard dirt and mulch assisting me in preparing my yard for the new Spring season. In all, the performance of the Titan XD Diesel is lagging in a straight line but does show up when its needed to tow and haul. The 0-60 mph time without a load is about 9.4 seconds, which is slower than most gas-powered V8 trucks. 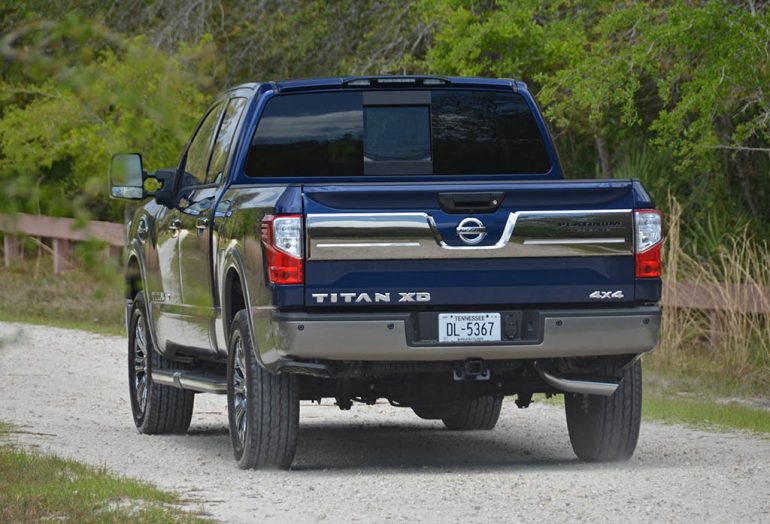 One aspect of the new Nissan Titan XD Diesel that was surprising and welcomed is its smooth ride quality. For such a massively-sized truck, the Titan XD Diesel rides better than most and its steering is mostly predictable yet requires several heavy-weighted turns from lock to lock. Braking also has an assured feeling with an extra boost from the system, hardly ever feeling inadequate.

The cabin of the new Titan XD Diesel in the Platinum Reserve trim serves a multi-purpose with a slight taste of luxury. The two-tone and perforated leather seating surfaces are comfortable and it’s rather easy to find your optimal seating position. Seating areas are spacious and there are just enough soft-touch surfaces to warrant paying over $60K for such a truck. The power steering column is somewhat slow to respond to find a desired position. Many of the controls are clear and straightforward. 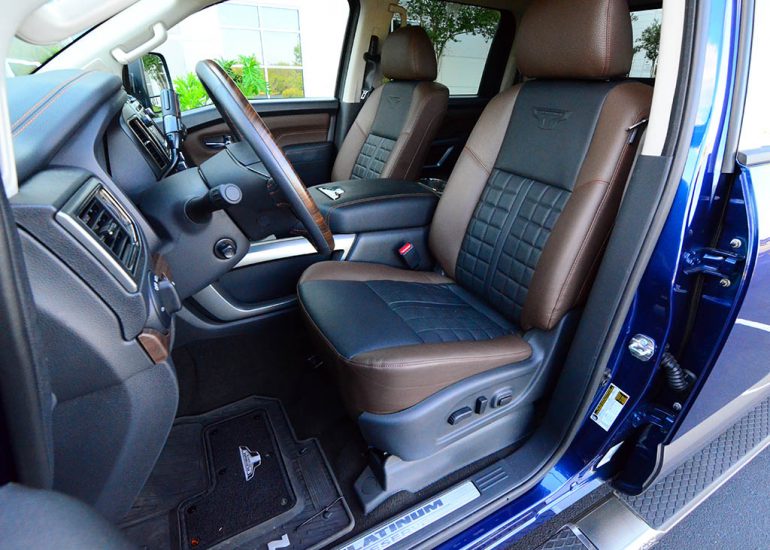 Where the Nissan Titan XD Diesel lacks is the infotainment unit, which is a common self-contained system that is equipped on other Nissan vehicles featuring a smallish 7-inch color touch-screen. For such a large truck, the small 7-inch infotainment screen seems out of place, as does the omission of Apple CarPlay and Android Auto. Though, there is some smartphone connectivity through Nissan’s app suite, which features apps like Pandora and iHeartRadio. 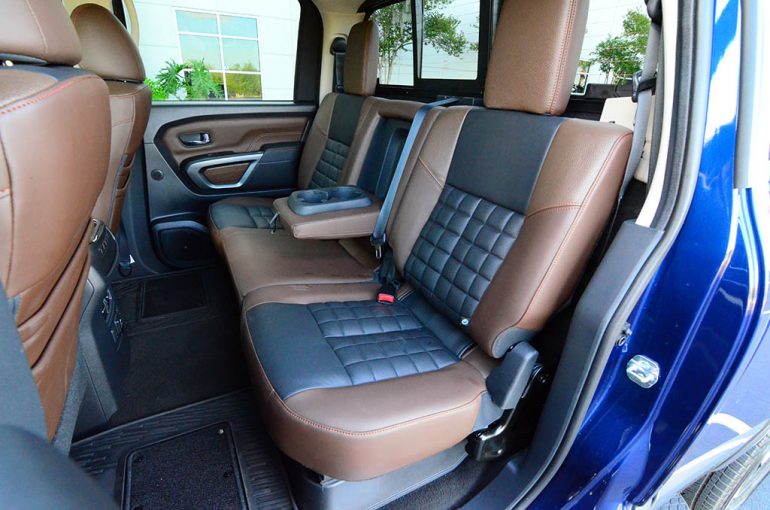 Finishing off the scope of tech in the new Nissan Titan XD is blind-spot monitoring, rear cross-traffic alert, and a 360-degree around-view camera system, which is a necessary item when parking and maneuvering such a large vehicle. There is also the welcomed smart-keyless entry system, pushbutton start, 400-watt in-bed power outlet, LED under-rail bed lighting, optional lockable bed boxes, automatic LED headlights, rain-sensing wipers, and a set of front fog lights. Many of the carryover features of the Titan XD are somewhat stale and could use a refresh with the addition of more active safety tech. 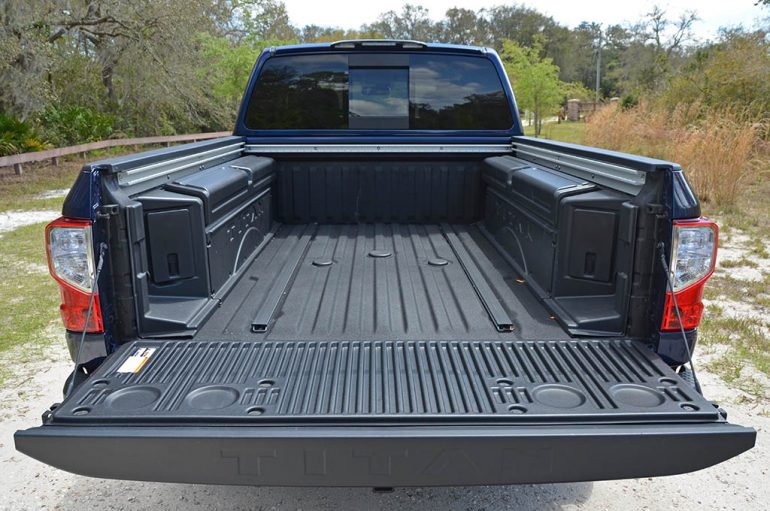 Nissan’s new Titan XD Diesel is a worthy entry in a highly critiqued segment, and it does well to hold up against the competition. However, I’m not so sure its collective of parts is enough to convert many from their Fords, Chevys, RAMs, and Toyotas. Maybe the pricing of the Titan XD will win-over newcomers for their choice in a heavy-duty truck, which starts at $37,590 for the single cab Diesel. My loaded-up and top-trimmed Nissan Titan XD Cummins Diesel Platinum Reserve test vehicle tips the price scale to $65,655.

>> Get The Best Price On The Nissan Titan XD from a network of local dealers now. <<