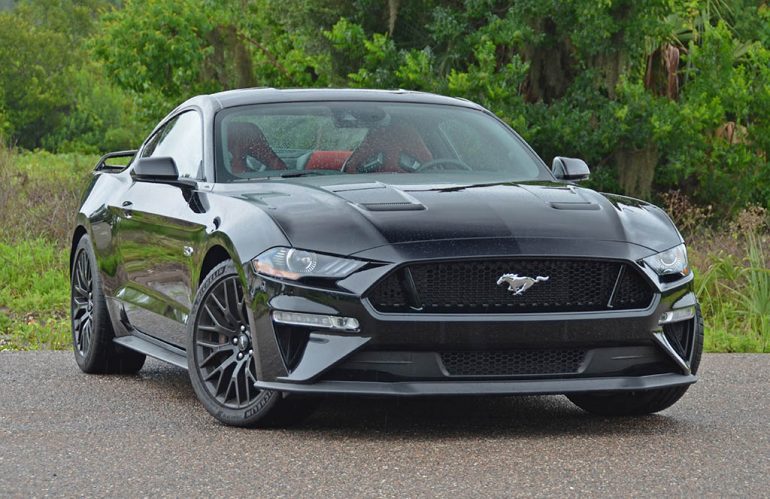 When it comes to pony cars, the Ford Mustang is the epitome of such a segment that has received new-found merit in being able to compete with finely tuned sports cars and some exotics. Even since the Mustang gained its independent rear suspension just a few years back, it has received additional refinements to make it an attractive pick for the modern-day pony car. For the 2018 model year, the Ford Mustang gets a refresh for its already well-perceived platform both updating the exterior improving its 5.0-liter V8 engine to boast additional power and the availability of a new 10-speed automatic transmission.

The pony car war continues to be a perpetual battle and the latest 2018 Ford Mustang update is a valid attempt to keep pace with the competition with some surprising twists after my week-long adventure with the car that helped start it all. From a first glance, many will notice the newly sculpted headlight surroundings that now encase LED headlights, LED turn signals, and LED fog lights that are found in the lower reshaped bumper and front splitter. At the rear, the 2018 Mustang retains its LED tail lights, but they are slightly reshaped for more visual depth while a new lower diffuser that hovers over and between a quad-tipped and valved exhaust system. The rear deck spoiler is also updated as equipped on my Mustang GT Premium test vehicle. 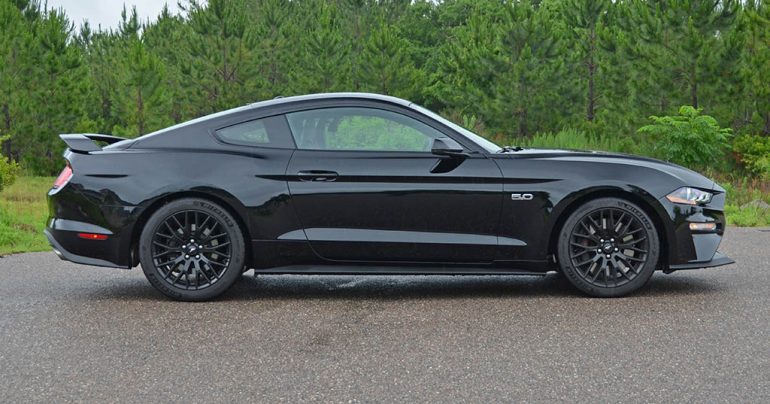 For its mid-cycle refresh, the 2018 Mustang gets the availability of a few trick items that were only found on Ford’s track weapon, the GT350 and GT350R. While not to overshadow the GT350 and all that it has to offer, my 2018 Mustang GT test vehicle gets a full list of optional equipment starting with the first tier Performance Pack (two levels available) and then moving onto the welcomed magnetic dampers, adaptive cruise control, blind spot monitoring, highly-bolstered Recaro leather-trimmed seats up front, and an active multi-stage exhaust system. While many of these features, sans the adaptive cruise and blind spot monitoring, were reserved for the GT350, they can now be equipped on the Mustang GT. Having such features makes for a better complete package for the GT’s handling and excitement found in the rumbling sound from the 5.0-liter V8. Speaking of the V8 engine, the latest iteration of the ‘five-point-oh’ pumps additional ponies to the rear wheels in the form of 460 horsepower at 7,000 rpm and 420 ft-lbs of torque at 4,600 rpm. 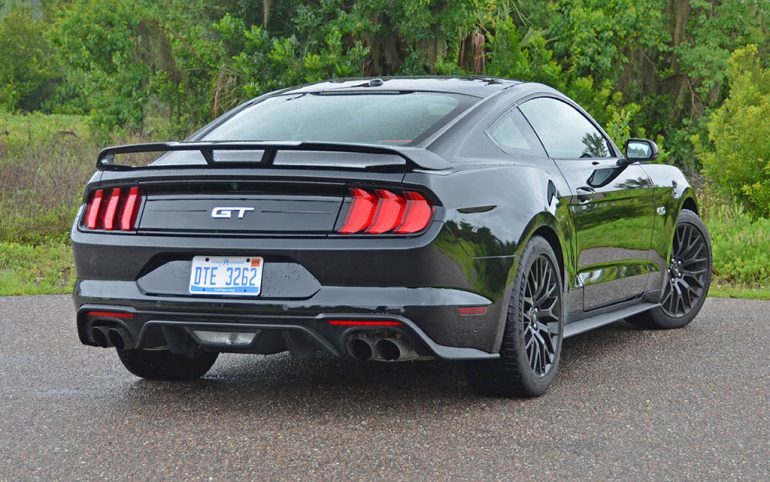 If you’re taking note, the new 2018 Mustang GT has inched pretty close to the output of the GT350. Moreover, many have paid special attention to the straight-line performance of the new Mustang GT when equipped with the new 10-speed automatic transmission claiming quarter mile times that match and seldom best the GT350. While I won’t continually compare the Mustang GT to the GT350, you can’t help but make the comparison as the GT350 has set a new benchmark for pony and sports cars alike that strive to become sharper tools on the track to break the hearts of some exotic car owners. 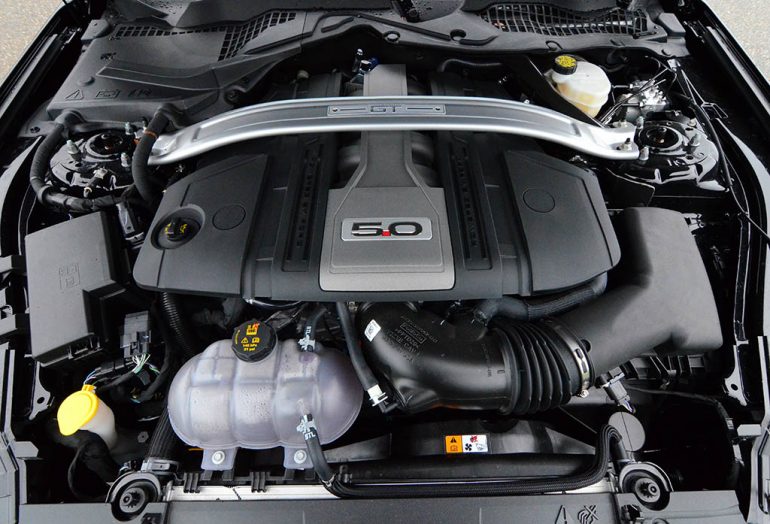 The newest Coyote 5.0 V8 engine is a screamer, one that bellows its sound through the optional active valve performance exhaust system much like a roaring lion’s screaming voice coming out of a well-insulated cave. The exhaust note from the quad outlets, which has four stages of tones from the active system (quiet, normal, sport, track) are mostly subtle changes in tone unless you compare quiet mode to track exhaust mode when the contrasting sound is noticeably different and distinct. The drive modes of the new Mustang GT still combine five initial modes (normal, sport, track, drag, weather) but allows a user-configurable ‘MyMode’ setting allowing you to customize the perimeters of the steering feel, exhaust mode, and over-all vehicle response mode, which automatically customizes the magna-ride damper system’s firmness. 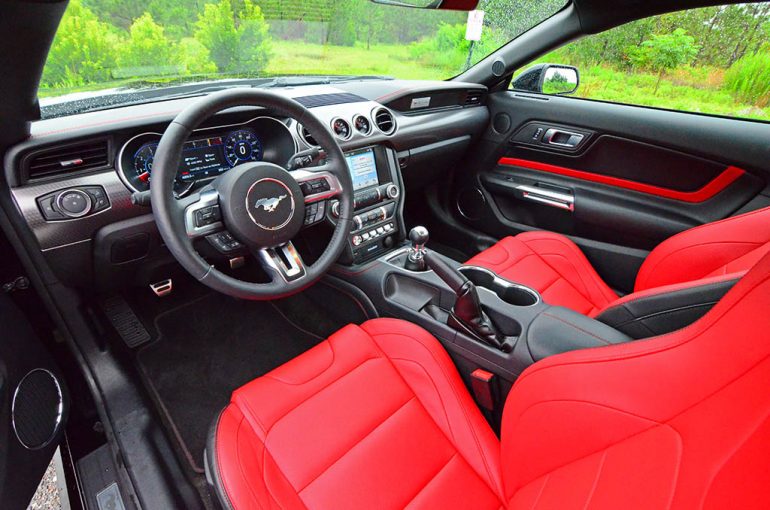 The docile feel of the new 5.0 V8 begs you to push it to its limit but doing so brings upon a bit of harshness with vibrations throughout the manual shifter in my 6-speed-manual-equipped test vehicle. While I didn’t get to test out the new 10-speed automatic transmission, the 6-speed manual was a welcomed baseline to draw for the new Mustang GT to compare it directly to what the GT aspires to be for enthusiasts who want more connection to the road. The Getrag-sourced manual transmission is most of what I remember in the Mustang even though it is claimed to be a redesigned unit – still not nearly as precise and ‘user-friendly’ as Tremec unit in the GT350. The limitations of the Mustang GT’s handling and acceleration appear to be left in the hands of the new Michelin Pilot Sport 4S tires taking note to the launch control feature, which stays active at all times if you so choose, often bogs down due to the exceptional grip of the rear 275/40ZR19 PS4S tires. When things hook up and the V8 starts to scream near its 7,500 rpm redline, the Mustang starts running wild. Rowing through the gears is a reminder that the 6-speed manual, despite the fun and road-connectivity, is the limiting factor of the GT’s 0-60 mph or quarter-mile time. Here, the 10-speed automatic would naturally keep the momentum going without delay and keep the V8 in a more desirable power spot to reach 60 mph in about 4 seconds flat as some tests have concluded. On the lateral side of handling, the GT does well but starts to push a bit more than most feel comfortable with surprising understeer, probably at the fault of narrower front tires and a lot of heft to carry with a 255-patch. Of course, as you can guess, a blip of the throttle can put the Mustang GT into oversteer, but things start to get dicey if you don’t have your front wheels already planted mid-way into a hard turn. An additional performance pack level option (Performance Pack 2) will hopefully remedy this very issue with wider tires all around, which I hear it does just that. 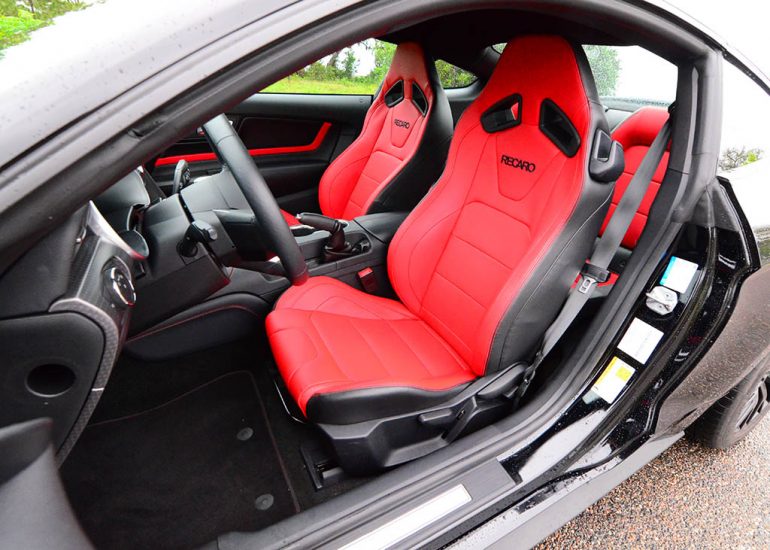 Fuel efficiency isn’t going to be stellar when you’re pushing 460 horsepower out of a 5-liter V8 engine. With that said, the Mustang GT manual gets surprisingly-consistent MPG numbers nearly matching its EPA estimates of 15 mpg city, 25 mpg highway, and 18 mpg combined. 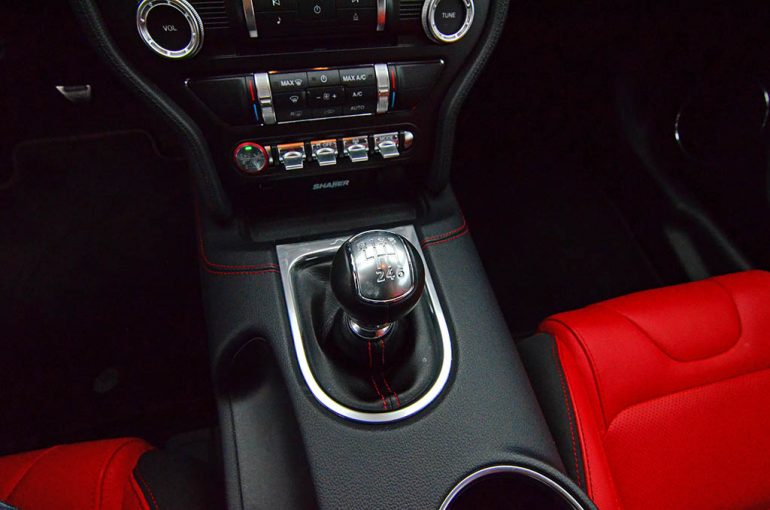 The interior of the new 2018 Mustang GT Premium is a welcomed improvement over previous generations. There has never been as much soft-touch material in a Mustang, and the 2018 GT Premium model equipped with the red Recaro leather seats add an appeal that transforms the vehicle’s interior to depart from its old notion of being somewhat cheapened with an abundance of hard plastics. For starters, the front transmission tunnel is now soft-touch and even has accented stitching. While the rest of the interior uses the traditional soft-touch surfaces and wrapped areas, the new 12-inch color LCD instrument cluster for the GT Premium completes the interior’s premium transformation. The new gauge cluster is somewhat configurable with a set of virtual gauges that can be set to toggle with each of the many drive modes. The center of the screen can be used to display a separate set of gauges for pertinent engine or configured to view other vehicle information. There is even a shift light indicator that can be configured at the top of the cluster.

While many of the characteristics of the new 2018 Ford Mustang GT have been carried over, the mid-cycle updates go the distance to keep Ford’s pony car up to date and performing at a level that makes it worthy of its vast pricing scale that starts at $25,680 for the base EcoBoost Coupe and can reach nearly $54,000 for a loaded-up GT Premium automatic transmission example. My loaded Mustang GT Premium manual test vehicle prices out at $53,160, including a $900 destination and delivery charge. The pony car from the folks at Ford lives on and will serve well to carry the “car” torch for the brand for many years to come in its current form.