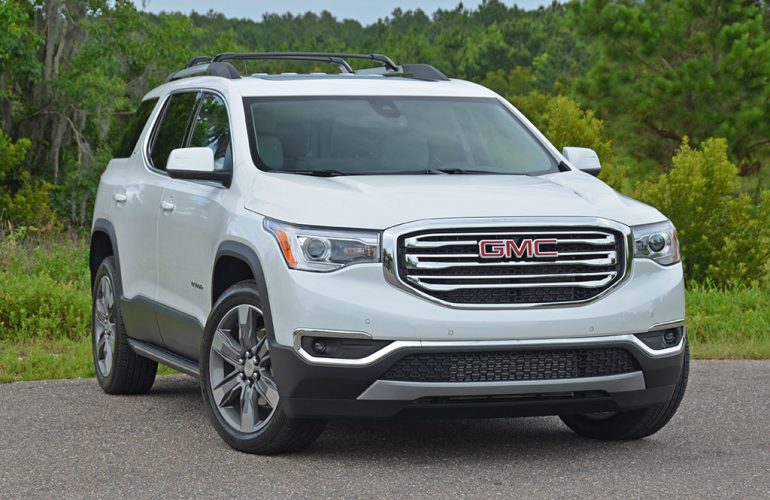 Continuing to appetize the masses with car-like crossover utility vehicles GMC carries on with their three-row Acadia without many notable changes for the 2018 model year. The brand has had a long-standing in offering a decently-driving crossover with the ability to pack in seats for up to seven passengers or a setup like my recent Acadia SLT-2 six-passenger test vehicle with second-row seating captain’s chairs.

>> Get the best price on the GMC Acadia from a network of local dealers now. <<

In its base form, the GMC Acadia isn’t the most attractive offering making due with 193 horsepower 4-cylinder engine and front wheel drive. Moving into the mid-level SLT trims the Acadia can be optioned with a welcomed 3.6-liter V6 engine with a healthy 310 horsepower and 271 lb-ft of torque, which is found in my front-wheel-drive test vehicle. In the front-wheel-drive setup, the Acadia SLT-2 V6 is somewhat of a handful in its ability to break the front wheels loose upon heavy acceleration inputs. The character of such is somewhat of a concern that only the optional all-wheel-drive system will remedy apart from the traction control sapping power a second or two after laying down strips of rubber on the pavement. The V6 engine for the beginning of 2018 gets mated to a proven 6-speed automatic transmission, which is said to later be updated with a 9-speed automatic with start-stop technology. 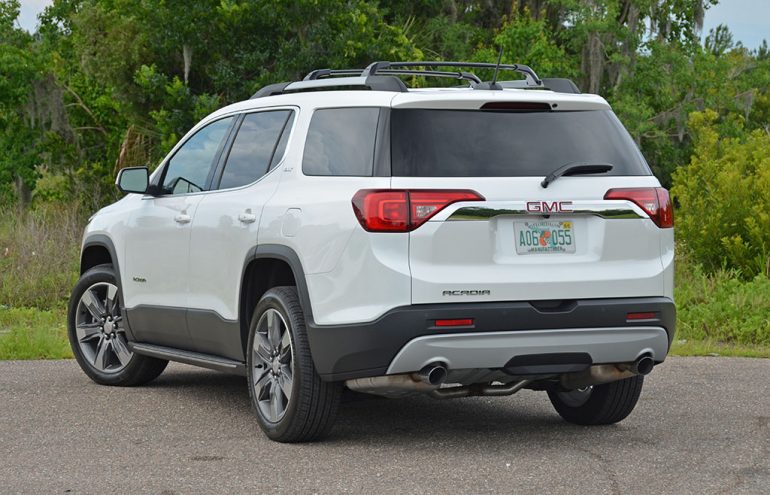 Overall, the performance of the new Acadia SLT-2 V6 FWD gains its merit of having a substantial amount of mid-range power and welcomed car-like driving qualities. In all, the Acadia drives mostly like a well-planted large sedan with a compliant suspension system. Other than the wheel spin on hard acceleration, the GMC Acadia drives well and is easy to maneuver much like a crossover of a smaller size. 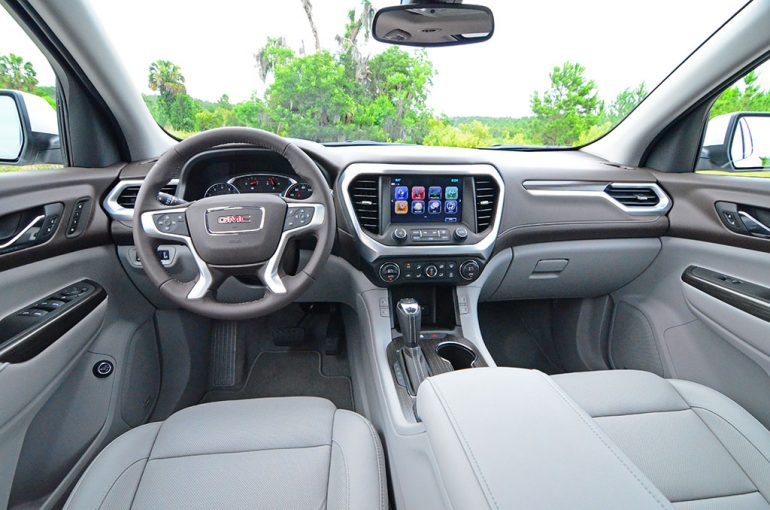 Due to the active fuel management system that at times deactivates two cylinders to get the efficiency of a 4-cylinder, the Acadia FWD V6 musters out 25 mpg on the highway matching its EPA estimate. Around town, the Acadia remains mostly consistent in its fuel consumption and slightly beats its 18-mpg city EPA figure and its 21-mpg combined figure to get an average of 21.8 mpg in my mixed city/highway driving adventures. 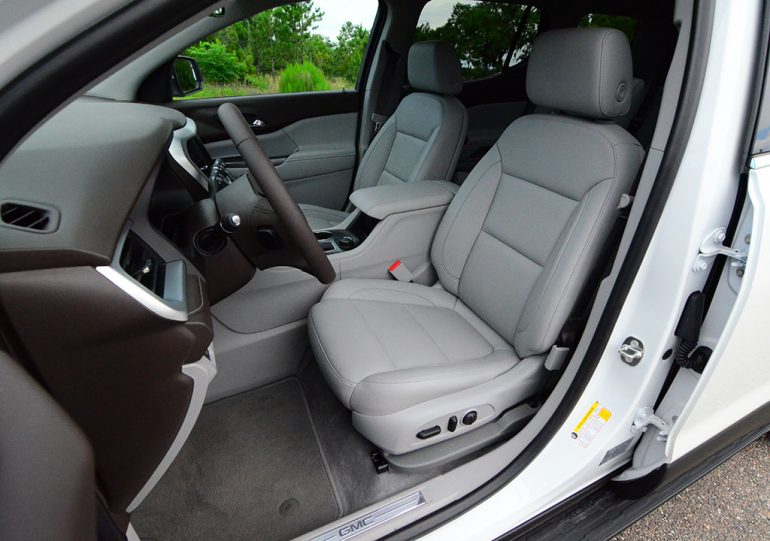 The contemporary look of the Acadia is only improved upon with the optional Denali trim that adds a more chiseled look through its front mesh grille over the chrome bared grill found on other trim levels. Larger optional wheels are a must as they add a styling character to the Acadia that would otherwise get lost in translation for the crossover being yet another vanilla SUV on the road. GM fails to add any premium content to the exterior of the GMC Acadia in its lower to mid-level trims making due with halogen projector headlights, halogen foglights, a more compact appearance over its predecessor, and value-degrading dark plastic lower body panels that also encase the wheel wells. 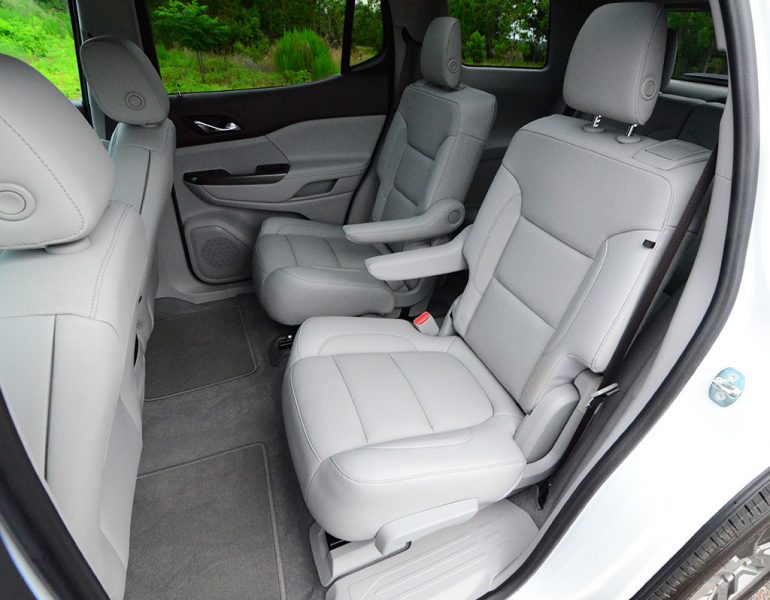 Where the latest GMC Acadia attempts to win over its audience is its versatility that combines a decent proven powertrain, excellent ride quality, and clever spaciousness. The interior of the Acadia downplays any bit of excitement that one would otherwise perceive from its lively V6 engine. The dull tones of my test vehicle never do anything to play up a luxury theme other than how well the infotainment unit integrates for being user-friendly and the vehicle’s overall usability. Moreover, the value proposition of the Acadia goes the distance to appeal to buyers in a vehicle with serves up respectable cargo and passenger volume that is surrounded by the use of modern-day tech. 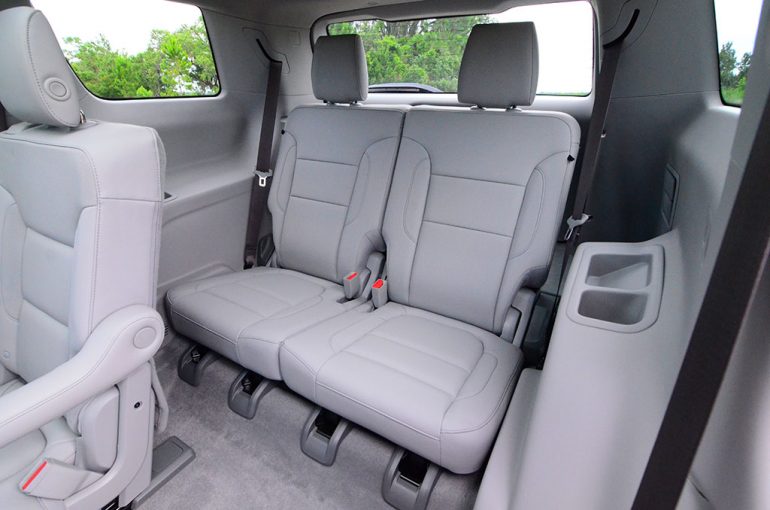 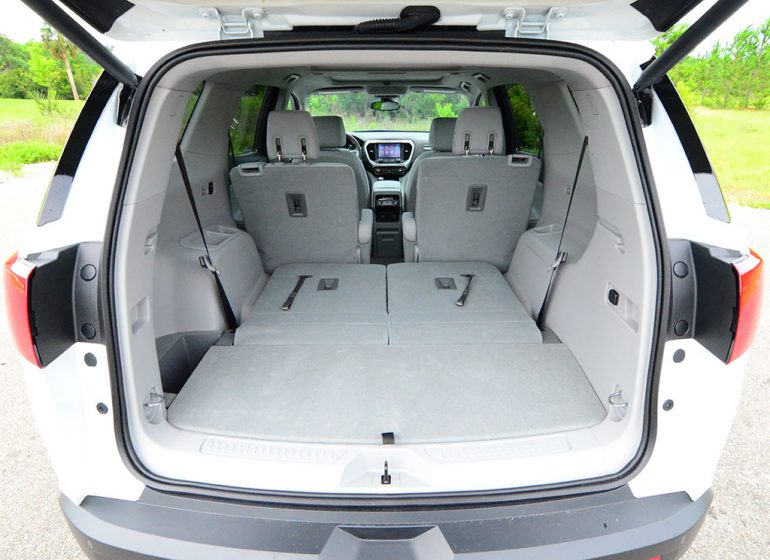 The price as-tested for my decently-equipped 2018 GMC Acadia SLT-2 V6 FWD test vehicle comes in at $46,645, which is a good price point for a such a versatile crossover package.

>> Get the best price on the GMC Acadia from a network of local dealers now. <<