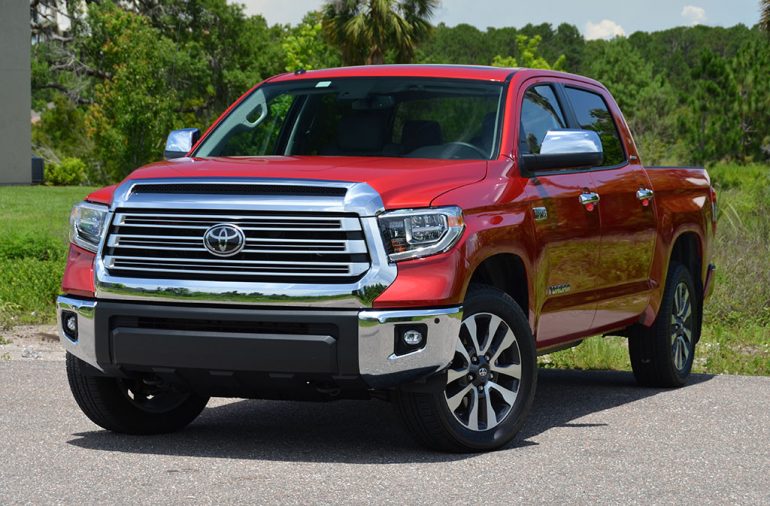 The methodical approach of Toyota has paid its dividends for a company that has claimed the top automaker rankings in terms of sales for many years. Such an approach has also paid merit when it comes to the brand’s full-size truck, the Tundra. While the Toyota Tundra doesn’t sell nearly the numbers of the Ford F-150, it does just fine to appease buyers who want to buy into the proven engineering and traditional sense of what is offered in the Tundra. For the 2018 model year, the Tundra remains a consistent alternative offering in the Truck market only adding a new TRD Sport package for the SR5 trim, eliminating the standard cab, and making the Safety Sense package bundling (a group of driver safety aids) a standard offering.

>> Get The Best Price On The Toyota Tundra from a network of local dealers now. <<

While there isn’t much left as a mystery when it comes to the Toyota Tundra, it does retain a certain classic presence, which is often exactly what buyers want in a rugged Truck that doesn’t catch anyone off-guard with what is expected. The traditional aspects of the Tundra are the outliers that keep buyers coming back, which is a way of making an excuse for its lack of offering advancements in tech or creature comforts that are otherwise found in some of its competition. With that, the Tundra continues to have a ‘turn’ key for its ignition instead of a push-button start option, no smart key option, and a cabin that doesn’t play up to the level of luxury-clad trim levels in high-cost competition. Moreover, the lackluster fuel economy seeing just shy of its 17 mpg EPA highway estimate is an unfortunate expected trait of the Tundra for buyers to factor in. However, you still get to comfortably burn regular unleaded fuel without risking the loss of power, so there’s that. 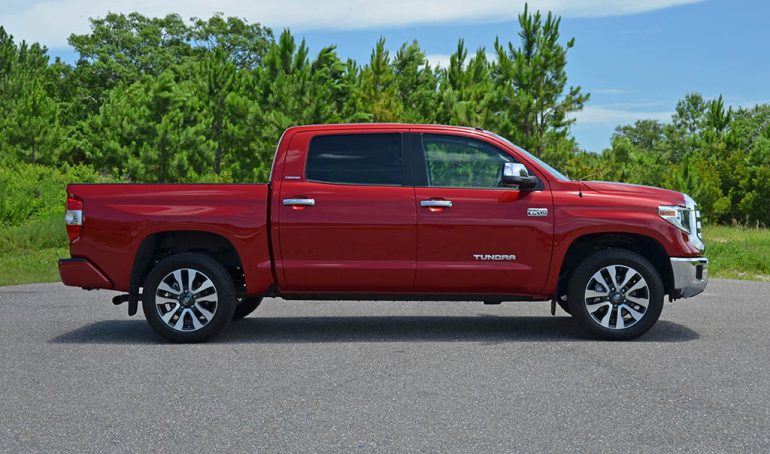 Even though the 2018 Toyota Tundra hasn’t changed much, it’s 5.7-liter V8 engine, exceptional build quality, and long-standing reliability goes the distance to round out what today’s buyers seek in a booming economic climate. The 2018 Tundra’s 5.7-liter V8 engine with 381 horsepower and 401 lb-ft of torque mated to a proven 6-speed automatic transmission get the job done time and time again without fail. If it is towing up to the max recommendation of 9,800 pounds, hauling over 1,600 pounds, or commuting to work in a cavernous cabin with leather-appointed seats, the Toyota Tundra will satisfy. 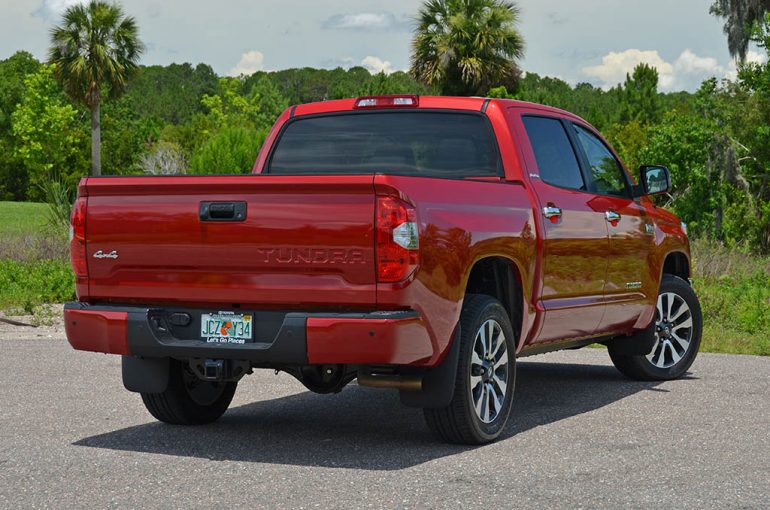 Much of what where 2018 Toyota Tundra has evolved into lies with subtle styling updates up front with new LED headlights with automatic LED highbeams and LED foglights equipped on my Tundra Limited 4×4 Crew Cab test vehicle. Additionally, there is adaptive cruise control, blind spot monitors, lane departure warning, rear cross traffic alert, and forward collision and mitigation – all part of the now-standard Toyota Safety Sense package. The larger 20-inch alloy wheels on the Tundra Limited combined with its rugged suspension setup have a slightly stiffer ride than some of the Tundra’s competition, but I found it not to be overly harsh. The damped tailgate with a rearview camera come in handy as does the integrated trailer brake controller for those who need to haul trailers, which the V8 engine and 6-speed automatic transmission are well up to the task. 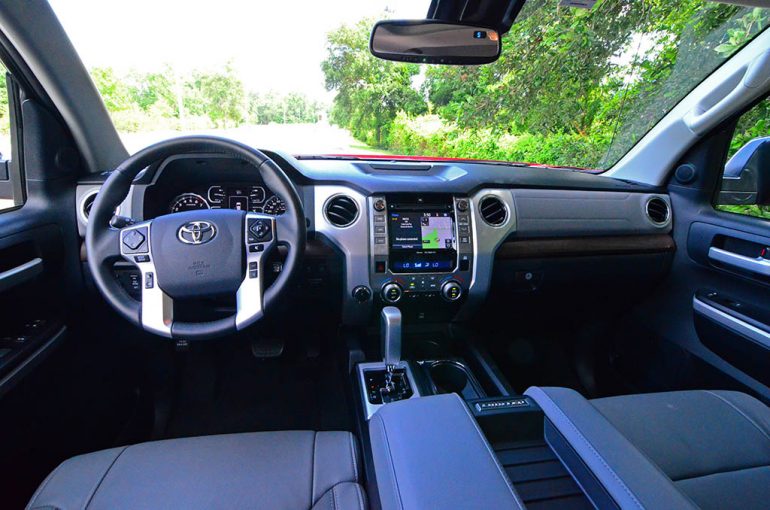 In the tech field, the Toyota Tundra Limited gets an upgraded 7-inch touchscreen that is a familiar unit for the brand that at times feels a bit dated. Though, the infotainment unit has many of the desired features except for Apple CarPlay or Android auto, which we could very well see in a year or two in the Tundra as Toyota slowly rolls out the feature in other vehicles – finally! Connectivity is limited to one USB port and Bluetooth, which opens the availability of a suite of Toyota’s Entune mobile app integration. 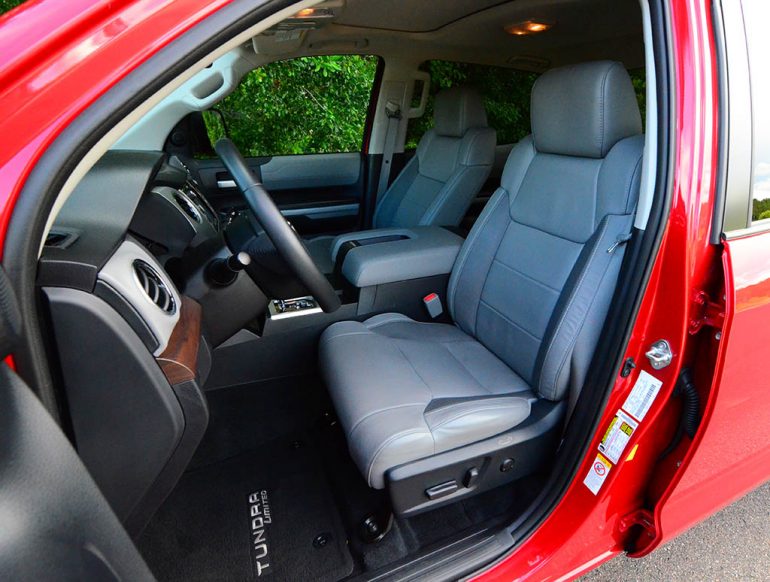 After driving the Toyota Tundra over many years, it is slowing showing its age for the overall formula without much to garner attention apart from its subtle updates and unique special edition trim levels found in the 1794 edition or the various TRD add-ons. Carrying the Tundra to at least compete with the front-runners is left to is versatility and towing ability with respectable performance on the road and off all for a decent price starting at just $31,320. My 2018 Tundra Limited 4X4 Crew Cab test vehicle reaches a still-respectable price of $49,295.

>> Get The Best Price On The Toyota Tundra from a network of local dealers now. << 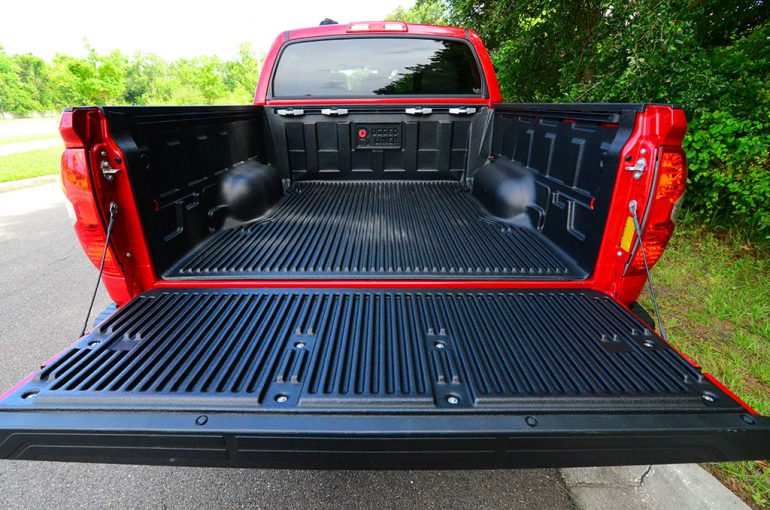