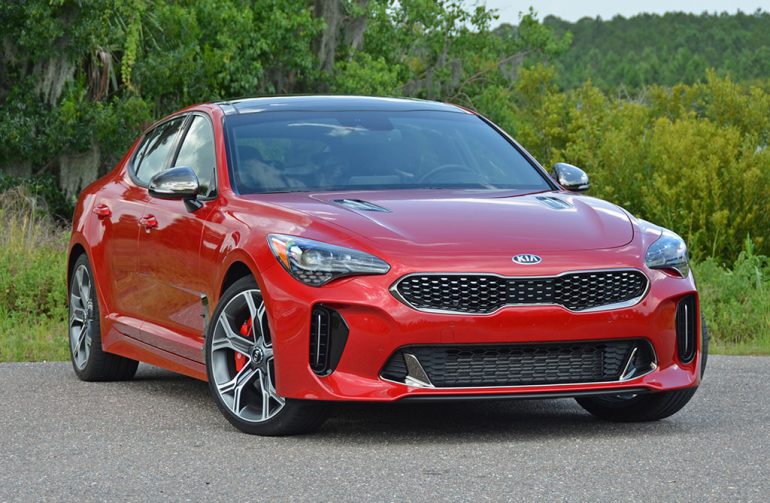 I have always loved a good underdog story. Whether it’s the movie Rocky or The Karate Kid, each divulges a story of victory from the corner of low initial expectations. Such a tale is reminiscent in my time with the all-new Kia Stinger, a sports sedan poised with a twin-turbo V6, luxury refinements laced with sporty character, and a visually stunning exterior that looks the part of a menacing sports car.

>> Get The Best Price On The Kia Stinger from a network of local dealers now. <<

While many enthusiasts have done their homework with the Stinger name, many are left curious and unknowing that the Kia brand has thrown a wrenched into most preconceived notions – all left lingering around Korea’s jolt to the automotive market. The new 2018 Kia Stinger represents much more than Kia’s entry into the enthusiast market but a signifier that they mean business to undercut the competition with respectable performance, value, and design. 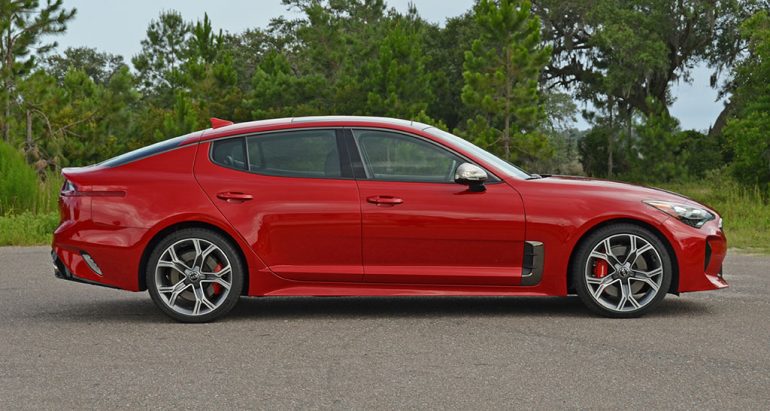 Kia’s new Stinger in the top-level GT2 trim is a collective of a sports sedan that uses many parts from the hodgepodge of Hyundai and Kia’s underground collaboration. With that, the new Stinger GT gets a familiar 3.3-liter twin-turbo V6 engine mated to an 8-speed automatic transmission that sends power to either the rear wheels or all four by way of an optional all-wheel-drive system. The power, all 365 ponies maxing out at 6,000 rpm, and 376 lb-ft of torque that peaks at a low 1,300 rpm, make for a pleasing formula, one that takes the Stinger GT from a standstill to 60 mph in just 4.4 seconds. 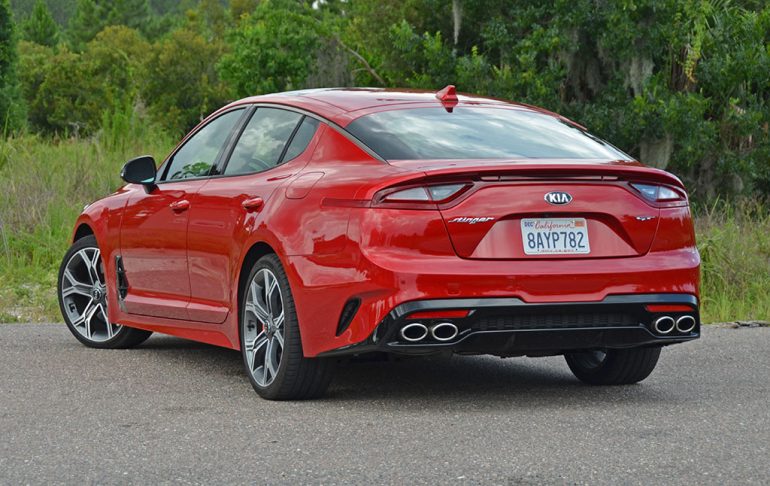 Performance on a scale would place the Kia Stinger GT high on the food chain of well-to-do mainstream luxury sports sedans. Though, the Stinger is a 4-door hatchback, encasing a usable power lift and closing smart hatch that makes way for 23 cubic feet of storage or 41 cubic feet with the rear 60/40-split seat backs folded down. Among mid-sized premium sports sedans, the Kia Stinger GT is one that surprises everyone as the quintessential underdog in that it gives many a literal run for their money. Power delivery is much like its name, it Stings you in the way it surprises to have a Kia that launches to either light up the rear tires in plumbs of smoke or hookup to dash to 60 mph in 4.4 seconds. Fundamentally, traction control (especially in Sport drive mode) appears to be purposely delayed allowing the rear tires to slip for a second or two just to put a large grin on your face after inducing small amounts of oversteer. In all, the Stinger GT is poised and ready for the challenge to take on cars that cost considerably more than the Stinger GT2’s loaded up price of $50K-even. 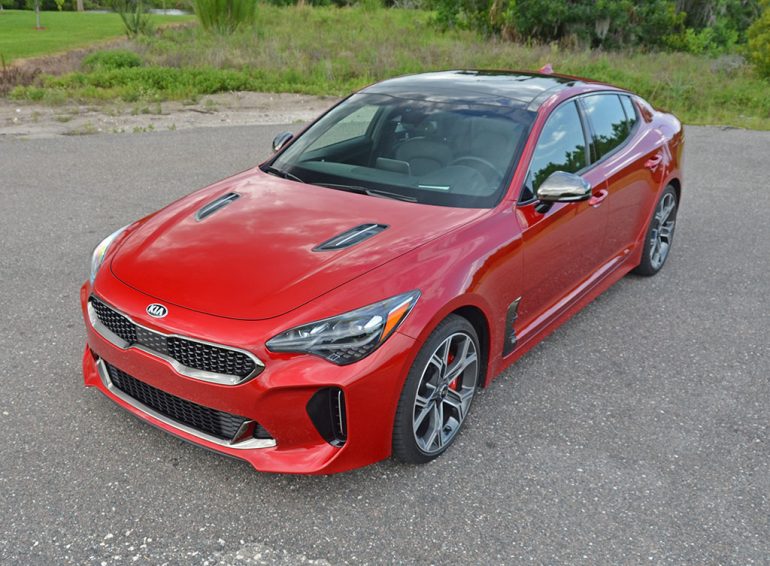 In the many preconceived notions of the Kia brand, the Stinger just about shatters them all. However, and I don’t mean to take away from the Stinger’s glory in my previous sentiments, the Stinger GT could use a few tweaks to potentially paramount its direct competition that have a historic edge on the Stinger. Most of the needed tweaks are found in its handling and suspension setup. While the Stinger utilizes adaptive dampers and does a decent job to balance sport and comfort through a series of drive modes, it somewhat falters with its lateral handling abilities mostly due to the rear suspension allowing the back-side to bounce around a bit more than most would desire. With those traits, the Stinger GT feels a bit loose when you inch past Interstate cruising speeds into sharp bends or over uneven surfaces. When taxed through sharp turns the Stinger GT pushes a bit with uncertain understeer followed by a lot of oversteer. While it’s fun to kick the tail out on the Stinger, which it will do at your beckon under hard application of the gas pedal, things get a bit “out of line” when pushed hard – and I don’t mean racecar-on-the-track hard. Simply put, the rear suspension isn’t up to par to keep things in check and the relatively small-patched 19-inch tires with only a 225 width up front (225/40ZR19) and 255s out back (255/40ZR19) could probably use a slightly larger section. If Kia could work out those issues, we could have knock-out contender that already has a lightweight advantage over some by sitting pretty at a respectable 4,004 pounds. 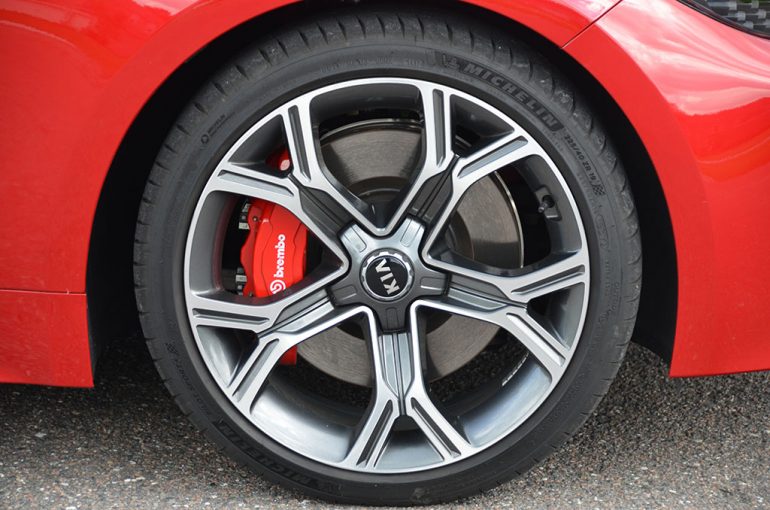 Apart from the rear suspension’s disappointment and tires that need some added width, the Kia Stinger GT has exceptionally sharp and quick steering only requiring just a hair over two turns from lock to lock. Such a steering rack easily allows you to induce controlled oversteer excursions and get yourself out of trouble when the rubber hitting the road isn’t cooperating. The drive modes, Smart, Eco, Comfort (default), Sport, and Custom, all have their unique calibrations that modify the character of steering effort, transmission shifts, throttle response, adaptive dampers, and control of the artificial cabin engine sound. Use of the Custom drive mode is ideal to customize each parameter and to set the dampers in the firmer Sport setting in hopes to remedy part of the previously-mentioned rear suspension issue. Fuel efficiency for the level of performance out of the Stinger GT is expected with me nearly matching the EPA estimates of 19 mpg city, 25 mpg highway, and 21 mpg combined. I saw just under 21 mpg with my mixed driving and never going much lower than 18.7 mpg when having a bit of ‘legal’ fun out on the road. 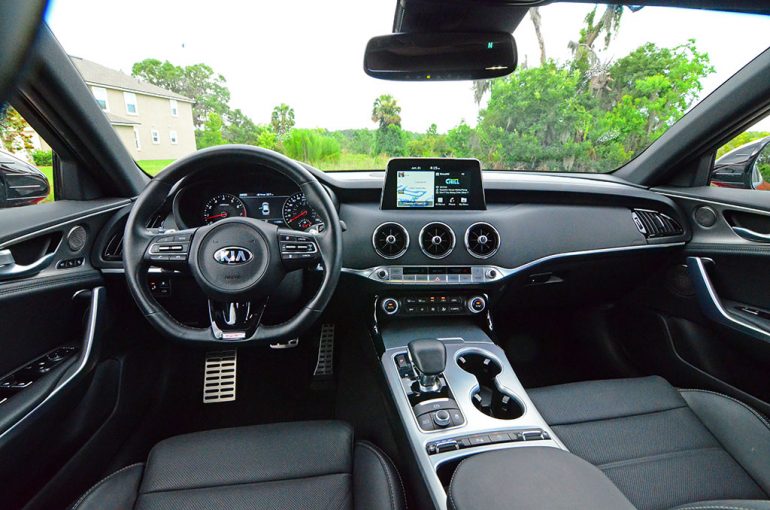 As a GT car in a good-looking 4-door hatchback form, the Stinger GT2 exhibits surprising comfort but doesn’t quite reach the level of established German competition. Shouting out the names of BMW’s 5 Series, Audi’s A6 and A5 Sportback, or even Cadillac’s ATS and CTS, all often tout a brand cachet that Kia cannot simply sell. Still, the Stinger GT appears to have shaken up the industry with such notions, which will effectively work once the public knows what the Stinger is all about. While many will never get past the Kia nameplate bringing up old convictions, the Stinger GT will leave them behind, literally. There’s a newly formed quality in the makeup of the new Stinger that sometimes has me thinking that I’m behind the wheel of something other than a Kia, something that may have been birthed in Germany and thoroughly tested on the Nurburgring and Autobahn. Funny enough, some of the previous statement is true as engineers took a new approach to give the Stinger, a real, “sting” using Brembo brakes, a clutch-type limited slip differential, a sharp and swift steering rack, and a twin-turbo V6 engine. 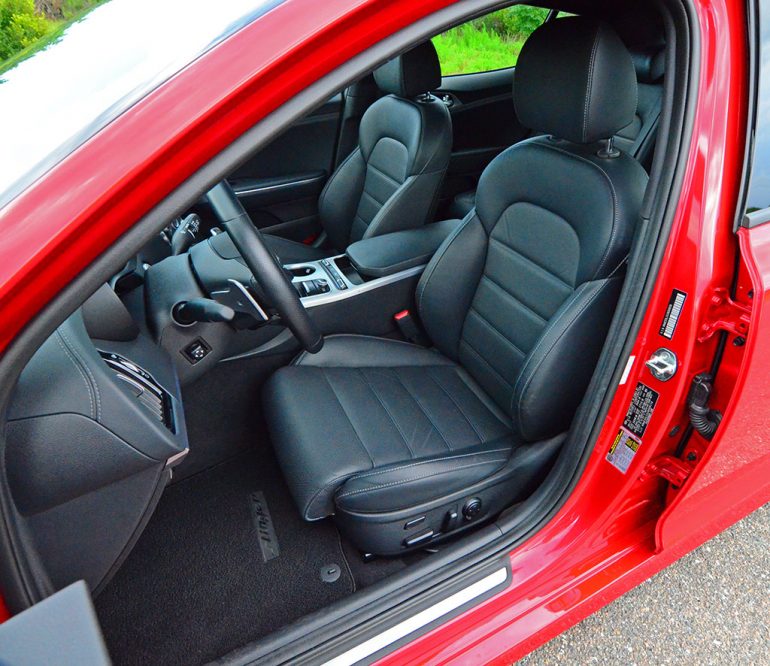 In an effort to go upmarket with the Stinger, Kia lands with an overall experience in the Stinger GT that almost reaches a level of what you get in other GT cars or comparable luxury sports sedans. The fit and finish of the interior is good but not exceptional. Most of the materials used exhibit an initial premium feel and there is a plethora of features and luxury amenities to keep most satisfied, such as the ventilated/heated front seats, Apple CarPlay and Android Auto, automatic LED headlamps with automatic highbeam assist, power telescoping and tilt steering wheel, memory driver’s seat, color heads-up display, and a bevy of active safety features (blind spot monitors that also display in the heads-up display, lane keep assist, adaptive cruise control, forward collision warning and mitigation/automatic emergency braking). The use of tech in the traditional Hyundai and Kia sense is welcomed with a user-friendly interface feed through a standard 7-inch touchscreen. In the Stinger, as you may see in the images, the touchscreen looks almost to be an afterthought protruding out of the soft-touch dashboard. However, most manufacturers are following suit with the same design aspect. 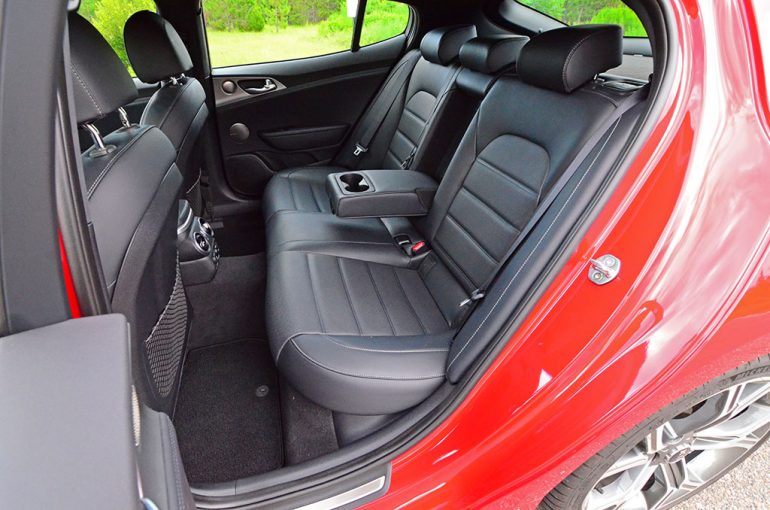 For the collective parts of the new Kia Stinger, which starts at a price of $32,000 for the base 2.0-liter turbocharged model, it’s a decently designed vehicle that will propel the Kia brand into something that a larger audience will pursue. When it comes to the top-dog Stinger GT, Kia will be immersed into the same grouping as the benchmark-setters of the automotive industry, and that’s a good thing. The pricing of the 2018 Kia Stinger GT2 topping out at $50,100 as-tested will eventually sound like a bargain once people get in the know – of how a Stinger feels. 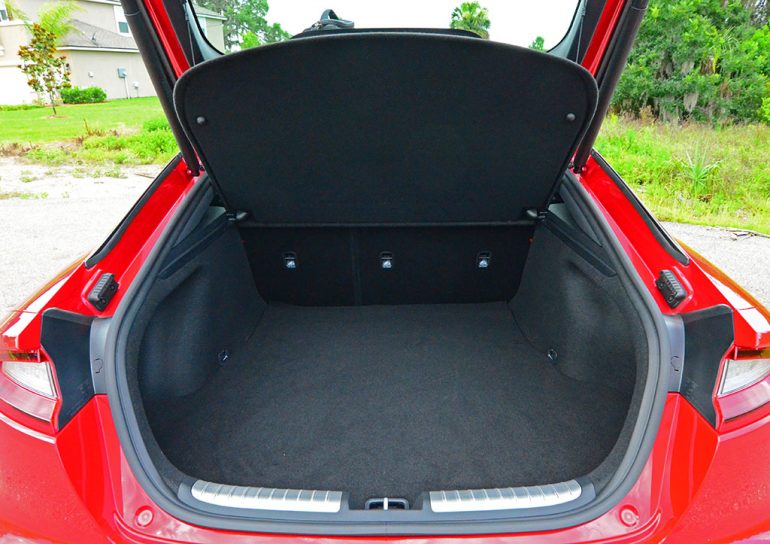 >> Get The Best Price On The Kia Stinger from a network of local dealers now. <<