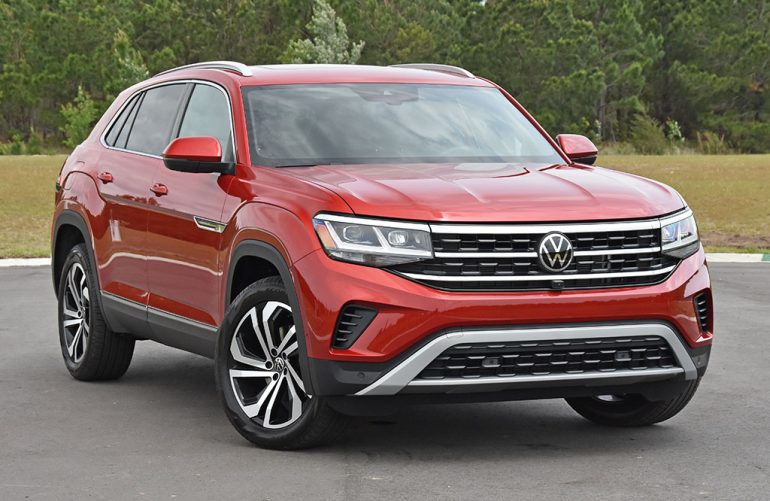 >> Get The Best Price On The Volkswagen Atlas Cross Sport from a network of local dealers now. <<

The new 2020 Volkswagen Atlas Cross Sport is everything you have in the normal Atlas but with just two rows of seating. Fortunately, as I experienced with the new Atlas Cross Sport for a week, Volkswagen doesn’t take anything away from an already-good thing with the Cross Sport variation. The engine choices remain the same as the three-row Atlas, as does the equipment and trim levels. 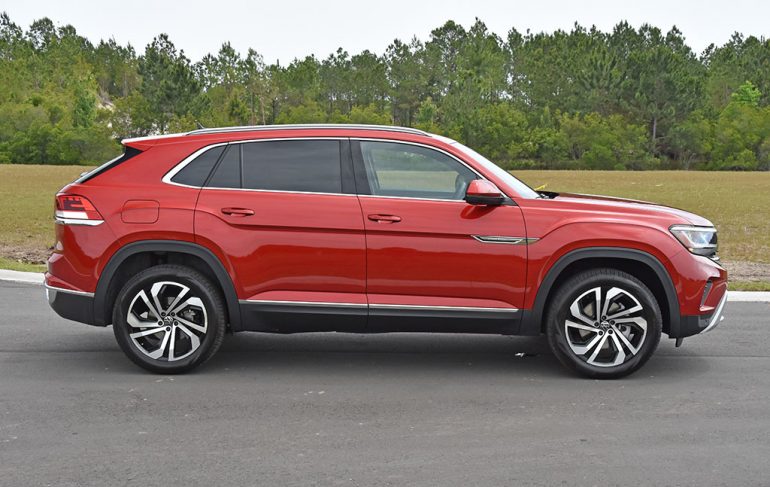 In driving the new VW Atlas Cross Sport there’s much that carries over from the current three-row Atlas, such as the 2.0-liter turbocharged engine and my test vehicle’s robust 3.6-liter V6 engine, a narrow-degree V6 that was once touted as the VR6. The engine, mated to a direct-feeling 8-speed automatic transmission does well for its predictability of power output. However, the 276 horsepower and 266 lb-ft of torque often doesn’t feel so punchy – it feels almost held back as the acceleration falls flat at times if you catch 8-speed automatic transmission in a gear that doesn’t land in a high RPM right away. Getting a good launch from a start is respectable with a 0-60 mph time of just over 7 seconds. 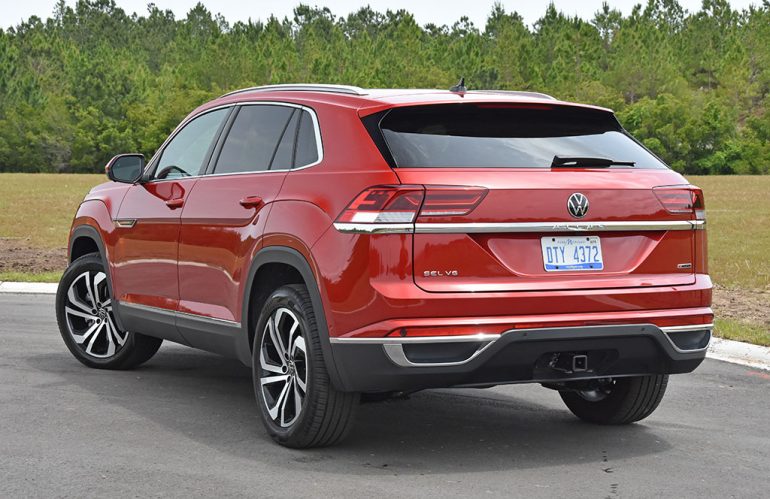 What is head-scratching for me in the new Atlas Cross Sport, is that the two engine choices are very close in performance numbers where the 2.0-liter turbocharged engine outputs 235 horsepower and 258 lb-ft of torque. Moreover, the fuel economy numbers are closely matched as well with my loaded-up Atlas Cross Sport SEL Premium 4Motion test vehicle getting 16 mpg city, 22 mpg highway, and 19 mpg combined. A similarly equipped 2.0-liter Atlas Cross Sport gets 18 mpg city, 23 mpg highway, and 20 mpg combined. One good thing about the EPA fuel economy estimates is that they are easily attainable in the real world and mostly consistent. The bad part is that they are somewhat disappointing compared to a rather broad field of competition. At least with the V6 engine you’re able to tow up to 5,000 pounds in the new Atlas Cross Sport, which is the engine that you must select if you wish to do any meaningful towing – the 2.0-turbo can only muster 2,000 pounds. 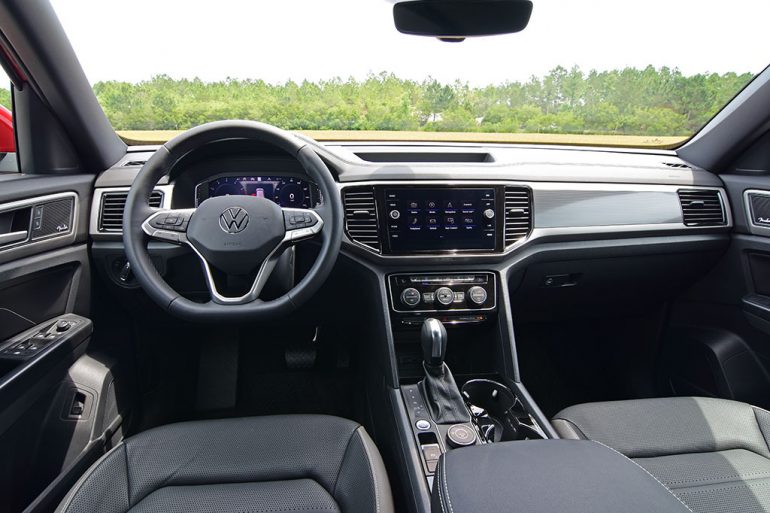 Where the new Atlas Cross Sport excels is its overall size, accommodations, and ease of use. The interior is mostly monotone with a good amount of hard plastics and soft-touch surfaces above the beltline of the cabin. The Atlas Cross Sport can be had with selections of accented colors for its perforated leather seats to add some appeal to the interior. 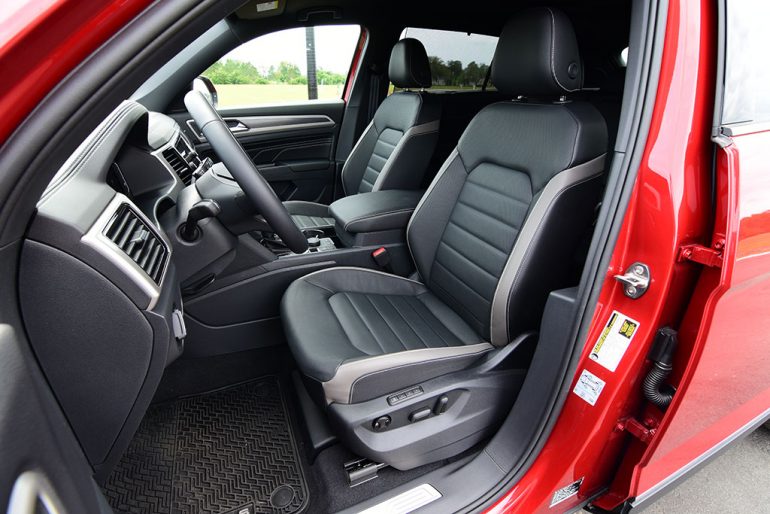 Overall, interior volume is ample, and cargo space is surprisingly vast, even when you consider how the rear hatch window slants down at an aggressive angle to slightly cut down on how much stuff you can stack in the rear. Folding the 60/40-split rear seatbacks down opens up the cargo area to over 77 cubic feet, which is quite competitive. 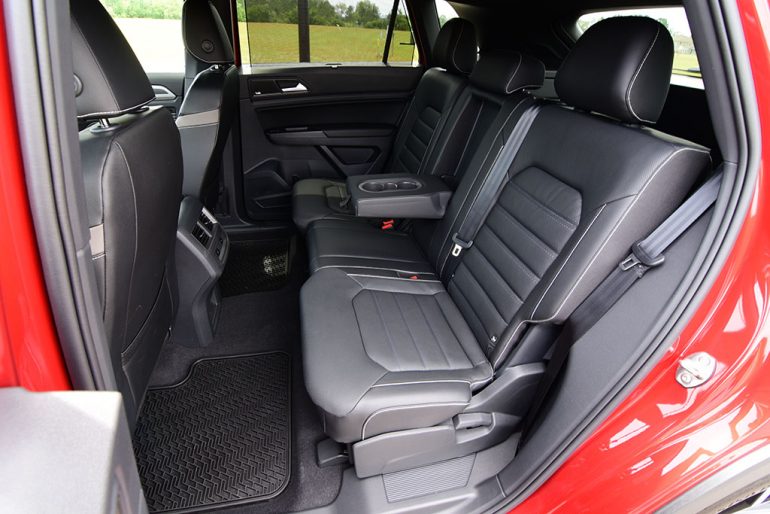 Volkswagen is getting into a new stride with its crossover utility vehicle offerings, and expanding upon the Atlas line with the new Cross Sport is a step in the right direction. Through the use of innovative new tech inspiring the configurable virtual cockpit digital driver’s gauge cluster, similar to that of Audi’s setup to display the navigation map, brings a nice premium appeal to the interior of the Atlas Cross Sport. Additionally, the 8-inch touchscreen infotainment unit with Apple CarPlay and Android Auto integration is userfriendly and keeps with today’s high-tech trends that are expected in new vehicles. 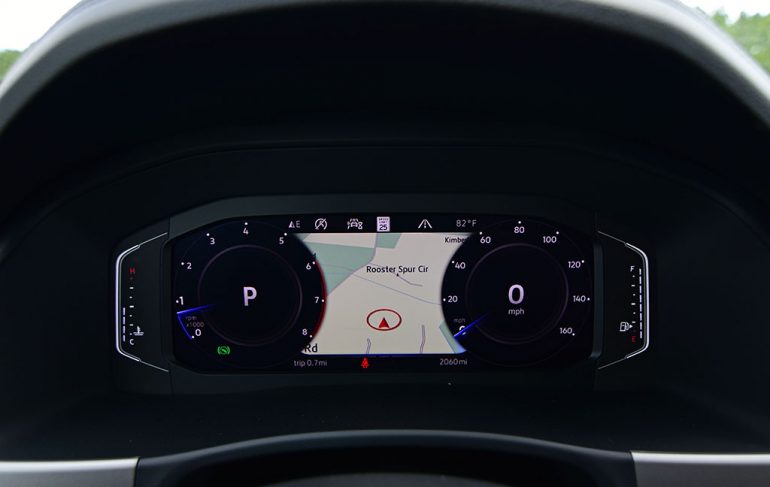 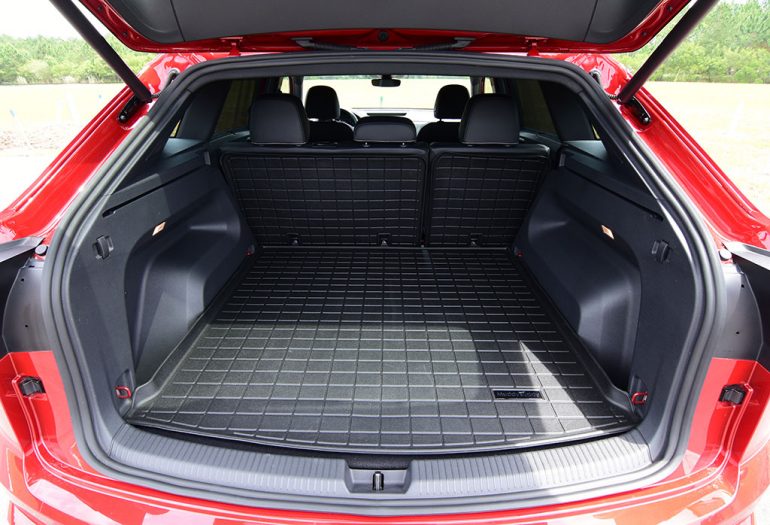 The starting price of the new 2020 Volkswagen Atlas Cross Sport for the base level S FWD trim is $30,545. Moving up the line to the mid-level SE with Tech 4MOTION all-wheel-drive trim, you’re looking at $37,845. My top-trim Atlas Cross Sport V6 SEL Premium 4MOTION test vehicle comes in at $49,510, which includes a $1,020 destination charge.